Background: Bladder cancer is the second most common malignancy among Egyptian males.

Patients and methods: To investigate the factors affecting survival in Egyptian patients suffering from urinary bladder cancer, we analyzed the geographical patterns of 564 bladder cancers patients from Oncology Departments of Ain Shams University, Mansoura University, Zagazig University and Damietta oncology centerover a period of 7 years between January 2006 and September 2013.

Results: Among the included 564 patients, Males represented 72.5% of the patients. While, 27.5% were female with a male to female ratio of 2.6, 227 patients presented with non-metastatic and 337 patients with metastatic urinary bladder cancer. Grade III was found in 36% of our patients and 60% of them had stage IV. Mean DFS was (9.15 ± 0.5) and (4.4 ± 0.1) while, mean OS was (13.5 ± 0.7) and (7.5 ± 0.15) months for non-metastatic, and metastatic patients, respectively. In univariate analysis, patients with no bilharzial infection, Non-SCC, responding patients had significant better DFS and OS vs. patients with bilharzial infection, SCC, non-responding patients (respectively, p=0.001 for all). In multivariate analysis, response (OS and PFS), SCC (OS and PFS) and bilharzias is (OS and PFS) where found to be highly statistically significant (Cox regression, P<0.001 for all) in the metastatic and non-metastatic group of patients.

Conclusion: Non-responding, SCC type and bilharzial infected patients had significant independent poor prognostic factors for OS and PFS in the metastatic and non-metastatic group of patients.

Worldwide, bladder cancer is considered the ninth most common cancer with a higher incidence in the western world [1] with transitional cell carcinoma (TCC) as the most common histology [2]. The risk factors for development of TCC of the urinary bladder include smoking and occupational toxin exposure [2-8]. Previously published studies have reported a 2.6-fold risk of developing bladder cancer in smokers compared to nonsmokers with adjustment for age, education and marital status [9]. Other studies report a 5.5 increase in bladder cancer risk comparing male regular-smokers to never-smokers after adjusting for high risk occupations [10]. Unlike TCC, the main risk factors for SCC are not environmental exposures, but exposure to infectious agents [7,11]. The main cause of SCC in developing countries is Schistosoma haematobium [12,13]. Bladder cancer is one of the most prevalent malignancy among Egyptian males (16%), accounting for >7900 deaths per year, which is considerably higher than most other parts of the world [14]. Countries geographically close to Egypt have lower recorded rates of bladder cancer [15].

Bladder cancer has the second-high prevalence in Egypt It accounts for 12.7% of male cancers with the majority of cases presented with invasive cancer [16]. In our study, we tried to investigate the factors affecting survival in Egyptian patients suffering from urinary bladder cancer.

This is a descriptive, retrospective study of histologically confirmed cases of urinary bladder cancer, seen at Oncology departments of Ain Shams University, Mansoura University, and Zagazig University and Damietta oncology center over a period of 7 years between January 2006 and September 2013. Data was retrieved from the records of departments. Patients’ files kept in the Medical Records and Surgical department were also used for clinical and demographic information. Patients with incomplete data (complete clinical history, age, failure to retrieve histology slides) were excluded from the study. Data were entered and analyzed using SPSS computer software version 15 and STATA 11. Student t-test and Chi square tests were used to establish associations, and significant association was considered when p value was less than 0.05.

This study included urinary bladder cancer patients presented to Hospitals of Ain Shams, Mansoura, Zagazig University hospitals and Damietta oncology center during the period from the beginning of 2006 to the end of 2013. Five hundred and sixty-four (564) patients with newly diagnosed 227 patients with non-metastatic and 337 patients with metastatic urinary bladder cancer where included in this study. Clinico-pathological characteristics of the patients were summarized in Table 1 and Figure 1. For all patients, the median age was 60 years old with a range of (40-80 years), males represented 72.5% of the patients while; 27.5% were female with a male to female ratio of 2.6. Regarding smoking history, nearly smokers and non-smokers were equal. ECOG Performance status of 61% of patients was <2 while, 39% of them were ≥ 2. Bilharziasis infection was noted in 74% of patients and only 26% of them were free. Diabetes mellitus (DM) and viral hepatitis were found in our cases by about 39% and 55.7% respectively. The most common pathological types were TCC in about 60% of patients followed by SCC in 26% of the patients (Table 2). So, the non-squamous cell carcinoma to squamous cell carcinoma ratio was 2.8. Fifty-seven percent (57%) of tumors were of grade II while grade III found in 36% of them only. So, high grade tumors in our study cases (36%) were less in occurrence compared with the low-grade tumors (64%). Three hundred and thirtyseven (337) patients were presented with stage IV and they form about 60% of all the patients while the other stages were 40% of the patients (227). Stage II was forming about 25% of the whole patients (Table 2). 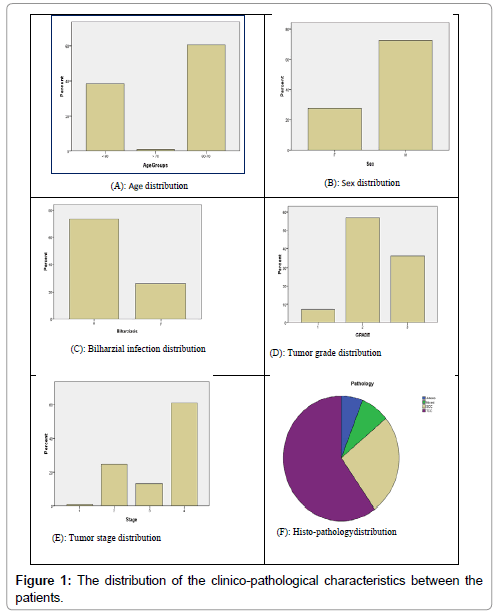 Figure 1: The distribution of the clinico-pathological characteristics between the patients.

Table 1: Clinicopathological Characteristics of the 564 patients

As shown in Table 2, the group of non-metastatic patients (227 patients) showed that 61.7% of them were diagnosed with stage II bladder cancer while stage III showed 32.6% approximately. Only 5 cases presented with stage I and the total number of cases presented with positive pelvic nodes and received adjuvant treatment (stage IV) were just 8 cases. In patients who were treated with curative intent (227), Sixty percent of them (135 patients) received the protocol of Gemzar-cisplatin. Cisplatin and 5FU were given in 25.5% (58 patients). The rest of patients were received Gemzar-carboplatin and MVAC equally by about 7%. Local recurrence occurred in 46% while distant metastasis in 56%. One hundred sixty-one patients (71%) were treated for the relapse by taxanes and 27% of them (61 patient) with BSC. One hundred and forty-three patients (63%) showed response after the 1st line treatment for the relapse while 84 patients (37%) showed progressive disease as mentioned in Table 3. In the metastatic group of patients (337), there was lung metastasis in about 41.5% of the patients which is the highest percent of recurrence events followed by local pelvic recurrence by about 33% of the total number of the metastatic patients. Bone metastasis was 13.5% followed by 11.5% for the liver metastasis. For those patients with metastasis, the 1st line treatments were gemzar-cisplatin, cisplatin-5FU and gemzar-carbopaltin with the percent of 60%, 26% and 14% respectively. The patients with stable disease after 1st line treatment was 59.3%; while those with progressive disease were 26.1%. Partial response just occurred in 14.5%. Fifty six percent (189 cases) of the cases received taxanes as 2nd line treatment. Only 9% of the cases received salvage palliative radiotherapy. The rest of the patients (117 cases) forming about 34.5% just had best supportive care (BSC) as shown in Table 4.

For non-metastatic patients, mean DFS was (9.15 ± 0.5) while, mean OS was (13.5 ± 0.7). For metastatic patients, mean PFS was (4.4 ± 0.1) while, mean OS was (7.5 ± 0.15). In univariate analysis, patients with no bilharzial infection, non-SCC, responding patients had significant better DFS and OS vs. patients with bilharzial infection. SCC, non-responding patients (respectively, p=0.001 for all; (Figures 2 and 3). In multivariate analysis, no response, SCC type and bilharzial infection where found to be significant independent poor prognostic factors for OS and PFS in the metastatic and non-metastatic group of patients (P<0.001 for all; (Tables 5 and 6). 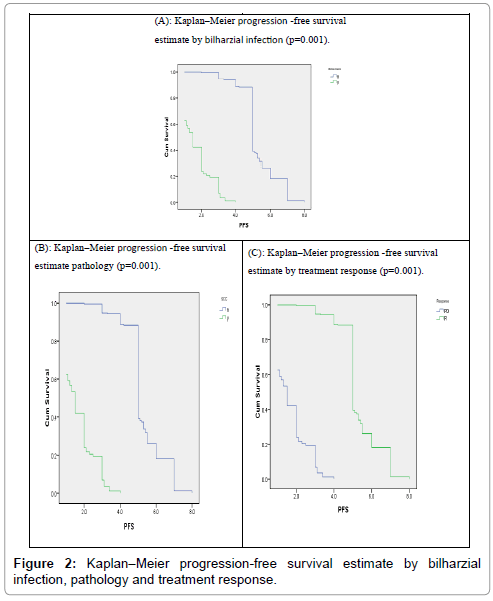 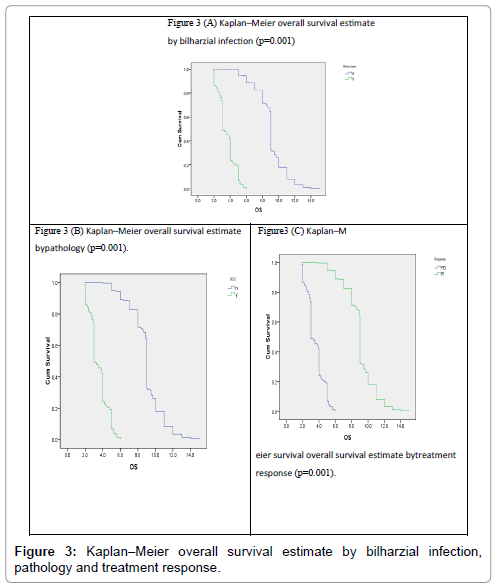 In Egypt, bladder cancer has been the most common cancer during the past 50 years. A significant decline in the relative frequency of bladder cancer (from 27.6% to 11.7%) was observed in the past 37 years by analysis of 9843 patients at the department of pathology, NCI, Cairo University [17]. A series of 564 bladder cancer data were analyzed for clinico-pathological characteristics, systemic management and outcome as well as the prognostic factors that affect the survival, the results were compared with findings reported from other studies. This study found that the median age at diagnosis for urinary bladder cancer, was 60 (range: 40-80 years) which is in agreement with previous Egyptian studies [18-20]. In the present study, bilharzial infection was in 73% of the patients, comparable to that was reported by El- Bolkainy [21] and Gouda et al. [17]. Which were 82% and 55.3% respectively [14].

In our study, 337 patients (59.8%) had TCC and 148 patients (26.2%) had SCC. This is comparable to that was found by Band et al. [22], who demonstrated significant changes in the histo-pathological types of bladder cancer in Egypt over the past 26 years; the relative frequency of TCC in this multi-year sample increased from 22% in 1980 to 73% of bladder diagnoses in 2005, while SCC decreased from 78% to 27% of diagnosed bladder tumors. Decline in SCC may be explained by reductions in schistosomal infection, increases in cigarette smoking and chemical exposures related to occupational hazards. Males represented 72.5% of the patients. While, 27.5% were female with a male to female ratio of 2.6 in our study, approximately three times as many males as females, a pattern similar to that found in previous Egyptian studies [14] and in other countries [22]. We found that the incidence is nearly equal between smokers and nonsmokers, the same reported by Salem et al. [23]. Of the non-metastatic patients, stage II, III were represented in (140/227) 61.7% and (74/227) 32.6% while incidence of noninvasive bladder cancer (stage I) were found in (5/227) 2.2% of the patients, this correlates with findings of Mohktar et al. 2007 [24] and Amin et al. [25]. In multivariate analysis of our study, no response, SCC type and bilharzial infection were found to be significant independent poor prognostic factors for OS and PFS in the metastatic and non-metastatic group of patients. While, in Schistosoma-associated bladder cancer, Ghoneim et al. [26], the multivariate analysis proved that tumor cell type is not an independent working factor determining the OS. In concordance with our results, many authors cautiously concluded that treatment end-results were not affected by tumor histology or etiology but affected by other prognostic factors like stage, grade, nodal involvement [26-29].

The epidemiology of bladder cancer was dramatically shifted in Egypt with a lower incidence of SCC, a greater incidence of TCC, older age at diagnosis, and a decrease in the male/female ratio. Non-SCC, responding patients and non bilharzial BC had significant better DFS and OS. More prospective using these poor prognostic markers may be for risk stratification and predictive for other alternative therapies is recommended.

Copyright: © 2018 Nagy AA, et al. This is an open-access article distributed under the terms of the Creative Commons Attribution License, which permits unrestricted use, distribution, and reproduction in any medium, provided the original author and source are credited.