ISSN: 2329-9096
International Journal of Physical Medicine & Rehabilitation
Make the best use of Scientific Research and information from our 700+ peer reviewed, Open Access Journals that operates with the help of 50,000+ Editorial Board Members and esteemed reviewers and 1000+ Scientific associations in Medical, Clinical, Pharmaceutical, Engineering, Technology and Management Fields.
Meet Inspiring Speakers and Experts at our 3000+ Global Conferenceseries Events with over 600+ Conferences, 1200+ Symposiums and 1200+ Workshops on Medical, Pharma, Engineering, Science, Technology and Business

Copyright: © 2015 Hirano D, et al. This is an open-access article distributed under the terms of the Creative Commons Attribution License, which permits unrestricted use, distribution, and reproduction in any medium, provided the original author and source are credited.

The purpose of the present study was to examine the effect of longitudinal habilitation intervention by care staff upon fixation duration in an individual with Rett syndrome using an eye-tracking system. The participant was a 22- year-old woman suffering from Rett syndrome. She could watch television but could not communicate verbally or execute purposeful upper extremity movements. We evaluated whether she could change the pattern of an eye gaze target by learning with the intervention of care staff. Fixation duration to the experimental targets was significantly changed after intervention for 3 weeks compared with before intervention. We consider that this improvement occurred because the patient learned the experimental tasks. Our findings suggest that individuals with Rett syndrome can acquire various abilities using eye gaze. Eye-tracking was shown to be a feasible method for visualizing the learning abilities of individuals with Rett syndrome and judging the outcome of habilitation intervention.

Generally, after a period of normal development, a healthy-looking baby girl falls into developmental stagnation, followed by rapid deterioration, loss of acquired speech, and the replacement of purposeful use of the hands with incessant stereotypies, a characteristic of the syndrome [6]. Early developmental skills are acquired by many, but clear differences from normal emerged, particularly in skills expected after age 6 months [7]. A range of behaviors has been reportedly used by individuals with Rett syndrome to communicate, including eye positioning/eye gaze, body movements, leading, clapping, reaching, pushing away items, and tantrums/ screaming [8]. In one study, individuals with Rett syndrome use multiple modalities to communicate, with eye gaze (78.9%) the most frequently used modality, followed by picture/symbol systems (61.3%) and body movements (56.3%) [9].

Eye-tracking technique is advantageous in that it represents a safer method, while it does not require strict motion restriction, and as a result it can be used in natural environments. These advantages specifically allow eye-tracker to measure eye gaze and stimuli in various subjects carrying out tasks similar to those experienced in daily life. This technology facilitates communicative functions of gaze favoring a successful outcome in many areas of rehabilitation [10]. Therefore, eye-tracking techniques have been used to recognize basic emotions [11], to examine attention and memory for faces and patterns [12], to determine the basic features of nonverbal cognitive processes [13], to examine visual fixation patterns and social preferences [14], to delineate if and how neurological and neurophysiological impairment reflects behavioral and neuropsychological functions [15], to evaluate recognition of the concepts of color, shape, size, and spatial position [16], and to verify whether females with Rett syndrome can respond to simple instructions, recognize and match objects, and categorize similar objects [17].

The participant was a 22-year-old female suffering from Rett syndrome. The participant’s birth weight was 2,676 g (gestational week: 39). Her interests and concerns to external world reduced after the age of about 18 months. Her abilities regressed after she got creeping. She was placed in an institution for developmental disabilities about 14 year ago. The participant lives in an institution for developmental disabilities and spent a great deal of time watching television in a living room during the day. She has evaluated underwent specialized attendance including occupational therapy, physical therapy, and pedagogic stimulation several times a week. She could roll over and sit alone, but could not speak or communicate verbally. Stereotypic hand movements were observed. According to care staffs’ observation, she had a tendency to focus on blue objects compared with red objects. Therefore, we evaluated whether an individual with Rett syndrome can change eye gaze targets by learning following habilitation intervention with care staff. The participant’s family provided informed consent, and the study was approved by the institutional ethics committee of the International University of Health and Welfare.

Fixation duration in two tasks (tasks 1 and 2) was recorded at the start of intervention and at 1, 2, and 3 weeks later (Figure 1). In task 1, 2 colored squares (red and blue) were displayed simultaneously for 5 s, followed by a white background for 5 s. In task 2, a red and a blue square were presented simultaneously for 5 s, followed by a photograph of her care staff for 5 s, which was displayed on the same side of the screen as the red square. This cycle was repeated 10 times in both tasks. To develop the participant’s ability to change fixation target, we used mainly verbal and nonverbal instructions with emotional communication from her care staff for 10 min, 5 days a week. Recording of fixation duration and longitudinal habilitation intervention by care staffs were mainly conducted in a quiet room during the day. Figure 1: Experimental design. Fixation duration in tasks 1 and 2 was recorded at the start of intervention and at 1, 2, and 3 weeks later. Both tasks commenced with a white background on the monitor for 5 s. In task 1, red and blue squares, which produced a symmetric appearance, were displayed for 5 s, followed by a 5 s white background. In task 2, two colored squares (red and blue) were presented simultaneously for 5 s, followed by a 5 s photograph of the patient’s care staff, which was displayed on the same side as the red square. This cycle was repeated 10 times in both tasks. The size and position of the squares were equated and determined randomly.

We used a non-contact eye tracker (Tobii TX300 with Tobii Studio software of Enterprise edition; Tobii Technology AB, Danderyd, Sweden) to present the tasks and collect eye gaze data. Gaze data were sampled at 300 Hz with an accuracy of 0.4° as binocular viewing. The tasks were presented on a 23-inch monitor. The participant sat in a seating system located approximately 65 cm away from the monitor.

To investigate and compare fixation duration to the blue and red squares, the photograph of care staff (rectangle), and the white background rectangle in the same position of the photograph, areas of interest (AOIs) were identified (Figure 2A). We defined fixation duration and intervention period as dependent and independent variables. We used two × four [color (blue and red) × week (start of intervention, 1, 2, and 3 weeks later)] analysis of variance (ANOVA) in task 1 and two × four (color × week) ANOVA and two × four [photograph (photograph of care staff and white background) × week] ANOVA in task 2, followed by Bonferroni adjustment for pairwise comparisons. A value of p<0.05 was assumed to be statistically significant. All statistical analyses were performed with SPSS Statistical Packages version 21 (IBM Corp., Armonk, NY, USA). 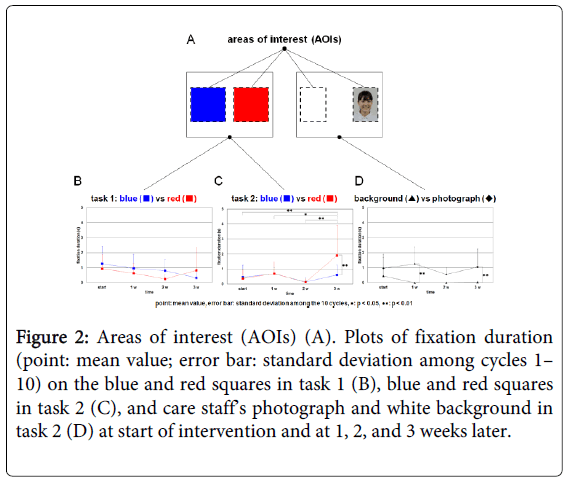 This is one of the first studies to evaluate fixation duration changes in an individual with Rett syndrome associated with longitudinal habilitation intervention by care staff using eye-tracking technology. Eye-tracker remains highly useful for the evaluation of eye gaze in individuals with severe apraxia, e.g., Rett syndrome [11-17] or cerebral palsy [18]. The first Rett syndrome study using eye-tracking system demonstrated that intentional gaze was measurable parameter in girls with Rett syndrome [17]. The eye did not recognize the concepts relative to the colors “red”, “yellow” and “blue”; the shapes “square”, “circle” and “triangle”; the sizes “big” and “small”; and the spatial positions “over” and “under” [16]. Individuals with Rett syndrome demonstrated a preference for socially weighted stimuli (they looked at people, and into people’s eyes) [14] and a preference for novel and salient stimuli in a way that normally developing children do [13]. Individuals with Rett syndrome could recognize faces and patterns although, compared with age-matched comparison participants, their recognition was poorer [12]. Rett syndrome participants had difficulty recognizing most expressions and their performance was significantly poorer than that of a typically developing age-and gender-matched comparison group [11]. A strict correlation between neurophysiological features and neuropsychological impairment in participants with Rett syndrome was demonstrated [15].

The pattern of fixation duration to experimental tasks was changed after longitudinal habilitation intervention for 3 weeks compared with before intervention. We hypothesize that the participant could understand that the photograph of care staff was displayed after the red square by repeated interventions and she came to look at the red square longer than before intervention. This result suggests that the patient may be able to recognize characters on television or objects with anticipation or expectation. A previous study reported that continuous instruction from care staff resulted in an individual with quadriplegia, mental retardation, and epilepsy acquiring new upper extremity motions that caused changes in prefrontal brain activation [19]. Our findings suggest that continuous intervention form care staff and family member resulted in an individual with Rett syndrome acquiring various abilities.

In the present study, we recorded fixation duration only 4 times (at the start of intervention and at 1, 2, and 3 weeks later) using eyetracking technique. We could check after a suitable interval to assess the duration of this improvement. We should record after 3 weeks intervention and check the reliability of this finding. The pattern of fixation duration to task 1 (blue vs red) was similar to the change in task 2 (blue vs red). In task 2 (background vs photograph), the eye gaze pattern did not change at the start of intervention and at 1, 2, and 3 weeks later. Therefore, we believe that our data are reliable. If care staff continues habilitation intervention after 3 weeks, we may be able to observe another behavior changes in addition to eye gaze changes. The future study should be considered in the identification of the long term effects. More long term intervention studies are needed to check a participant’s longitudinal changes and the identification of intervention outcomes. Care staffs should routinely evaluate an individual’s abilities and examine intervention plans and means and judged intervention outcomes.

This study was supported by Grant-in-Aid no. 22330260 for Scientific Research from the Japan Society for the Promotion of Science.