Department of Cell Biology and Genetics, University of Lagos, Nigeria

Copyright: © 2015 Minari JB, et al. This is an open-access article distributed under the terms of the Creative Commons Attribution License, which permits unrestricted use, distribution, and reproduction in any medium, provided the original author and source are credited.

Aristolochia ringens is considered as a local stimulant which could influence criminal behavior. In the present investigation, the detailed pharmacognostic study of A. ringens stem is carried out to lay down the standards, which could be useful in future Forensic identification of unknown plant material. The study includes macroscopic, microscopic, prelimimary phytochemical screening and physiochemical evaluation. The objective of this study was to characterize the unknown plant material seized from the scene of crime. In the present study, a TLC-method was described for the identification of A. ringens stem.

Aristolochia is a large plant genus with over 500 species. The scientific name Aristolochia was developed from Ancient Greek aristos (?ριστος) “best” + locheia (λοχε?α), “childbirth” or “childbed,” Collectively known as birthworts, pipevines or Dutchman’s pipes, they are the namesake of the family (Aristolochiaceae). They are widespread and occur in the most diverse climates. Aristolochia ringens is one from the 500 species of Aristolochiaceae family with common name Gaping Dutchman’s Pipe (pipe vine) which is a plant that is native to Brazil and is now been cultivated throughout the tropical world. The species name ringens means snarlping in Latin. Aristolochia ringens is a tall, hairless slender twiner plant with stalked leaves, round, almost kidneyshaped, pale green above, glaucous beneath plant. They are commonly found at the Southern-Eastern part of Nigeria [1] with the local name ‘Akoogun’ or ‘Awo igba arun oyo’. The simple leaves are alternate and cordate, membranous, growing on leaf stalks. The plants are aromatic and their strong scent attracts insects. Stipules are noticeably leaflike, 2-lobed, kidney-shaped (Figure 1). Flower stalk is slender, four times as long as the leaf stalk with 7-10 inches long of flower, greenish and marked with dark purple. Aristolochia has been shown to be both a potent carcinogen and kidney toxin. Herbal compounds containing Aristolochia are classified as a Group 1 carcinogen by the International Agency for Research on Cancer [2,3]. The Flower has an obovoid sack, 2.5 inches long, woolly inside. The flower tube ascends obliquely from the sack, dividing into two very long lips. The two lips give an impression of a gaping mouth. Due to their spectacular flowers, several species are used as ornamental plants. Epidemiological and laboratory studies have identified Aristolochia to be a dangerous kidney toxin; Aristolochia has been shown to be associated with more than 100 cases of kidney failure [4,5]. It has been confirmed that naturally occurring carcinogenic compounds have been found in plants within the genus Aristolochia as of 2013 [6]. In traditional Chinese medicine Aristolochia species are used for certain forms of acute arthritis and edema [7-9]. It’s an example of medicinal plant with the methanolic extract of the whole plant commonly used in the traditional treatment of various diseases in humans and animals by some phytotherapist in Nigeria, and was evaluated for anti-trypanosomal efficacy in mice infected with Trypanosoma congolense [10]. A. ringens serves as an antidote for snake bite, used as an ornamental due to their spectacular flowers. Herb sellers at Adeleye market, Bariga, Lagos State and Herb sellers at Oke Aje market, Ijebu Ode, Ogun State use the decoction of A. ringens in combination with Picralina nitida seed as stimulant for men and it is the major plant. An individual on such stimulating plant could act under influence to commit crime just like any one under the influence of drugs like Yohimbine [11] and alcohol [12]. Although there are scientific means of identifying most stimulants but the standard for most local stimulants are readily unavailable. Therefore, in the present study an attempt has been made to study the pharmacognostic standards of the stem of A. ringens for forensic detetion when found at a crime scene as an unknown plant. These standards are of utmost importance not only in finding out the genuity, but also in the detection of adulterats in marketed drugs as well as in Forensic detection. The dried sample of Aristolochia ringens stem was procured from a herb seller from Oke aje Market Ijebu-Ode, Ogun State, Nigeria and authenticated at Herbarium, University of Lagos, Nigeria with voucher number specimen (LUH 5570). It was well dried for (10 mins) in a microwave LG 450 W and ground with a manual bona vegetable grater with cover. The ground specimen was stored in a clean glass ware container until needed for analysis.

All reagents used were analytical grade and were prepared in all glass distilled water.

Phytochemical analysis of the aqueous extract was carried out following the methods described by Odebiyi and Sofowora (1978) [13,14]

Nitrate test of the extract of A. ringens from phytochemical extract was carried out following the methods described by Mascetta (2002). [15] (Table 1).

An exhaustive Pharmacognosy was carried out using the standard methodology [14] (Table 2).

Plant sample was observed with the aid of the naked eyes under a white light.

Two grammes of powdered A. ringens was weighed accurately in a test tube and boiled with 50% HNO3. A pinch of KCLO3 was added to it, and then placed in sunlight for four days until the chips turn milky yellow. It was washed with water, then the powder was transferred on a clean microscopic glass slide. Lignified fibers were stained with the staining agent (safranin) and glycerin. The slide was observed under low power. The uniseriate medullary rays running straight and parallel occasionally becoming slightly curved, starch grains, lignified fibers, fragmented stem tissues and other characteristics were observed.

Aliquot of standard Aristolochia ringens extract was obtained in Methanol (3.0 gm of powdered drug was extracted with methanol (3 × 15 ml) under reflux in a water bath). Extract was filtered and the volume was made up to 25 ml with methanol. This extract was spotted onto a pre coated TLC plate silica gel G254, and developed with Toluene: Ethyl acetate: Formic Acid (5:5:2) and Acetic acid : Methanol (40:60) respectively in a pre-saturated TLC chamber, to the height of 9 cm. Plate was removed from the chamber, dried in air and visualized under ultraviolet light at 254 nm.

Similarly, TLC was also carried out on a pre-coated silica gel G254 plate by using Caffeine powder, Brucine powder and Rawulfia plant sample as reference standards. Then the plate was developed with Methanol: Chloroform (10:10). Standard solutions were prepared by dissolving 1 mg each of Caffeine powder, Brucine powder and Rawulfia plant samples in 10 ml of methanol. 10 nl each of the test and standard solutions were taken on a TLC plate as bands of 10 mm. The plate was developed to a distance of 8 cm from the line of application. Then the plate was dried in air and was visualized under ultraviolet light at 254 nm.

The plant sample comprises of two parts, the twig (soft) and the woody part (strong). The twig which is slender, golden brown in colour with striate epidermis down the entire length of it is shown in Plates 1 and 2. Sample size 5.2 cm in length and 0.3 cm diameter. Plates 3a and 3b shows a brown woody part of the plant with dehydrated epidermis thus shrinkle. Vascular bundle evidence from the cut-end and stipule bi-loop was also observed. Sample size 5.7 cm in length and diameter 0.9 cm was considered.

Plate 1: The twig part of A. ringens. 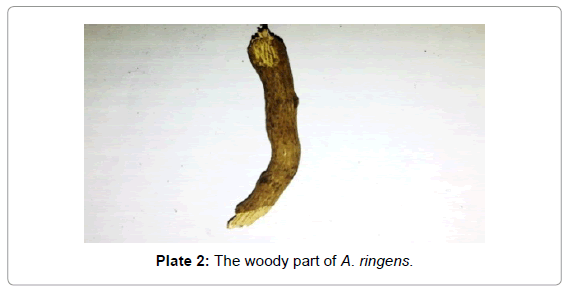 Plate 2: The woody part of A. ringens.

Plate 3a: Microscopic view of Aristolochia ringens powder showing lignified fibers (A) and starch (B).

Plate 3b: Microscopic view of Aristolochia ringens powder showing fragmented stem tissue (A and B).

A band of 6.8 cm was observed under 254 nm UV light. The chromatogram obtained from the test sample solution against the standards solution shows a band at Rf at 00.86 for test sample corresponding to that of the standards. The plate was then sprayed using dragendoff spray for clear bands visualization. 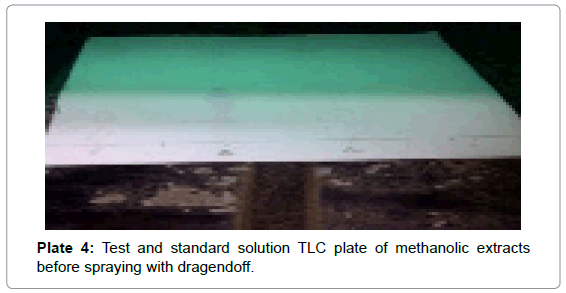 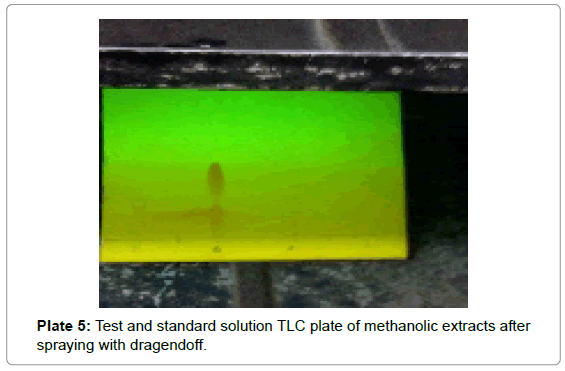 In the present study an attempt has been made to select some Physiochemical, Phytochemical, Macro and Microscopic and Thin Layer Chromatography examinations, which are found to be very useful tools for the identification and characterisation of A. ringens stem. A simple and precise analytical method is used for the analysis of A. ringens stem, which could be useful in future forensic identification of unknown plant material (Tables 1-6).

Table 4: Physicochemical Evaluations of A. ringens.

Table 6: Bands of methanolic extracts of test and standards solutions from point of spot (cm).

The suggested protocol can also be used for the qualitative evaluation of A. ringens stem in laboratory with very less equipemtns and expenses. These can be employed successfully for routine forensic analysis of A. ringens. As the evaluation expenses are less as compared to other instrumental methods, this could be a method of choice for official monographs in forensic Toxicology.

These distinct pharmacognosic properties of Aristolochia ringens stem observed from the above studies shows that, it can easily be characterized and identified when obtained as unknown plant from crime scene during forensic detection.