Copyright: © 2016 Sairam P, et al. This is an open-access article distributed under the terms of the Creative Commons Attribution License, which permits unrestricted use, distribution, and reproduction in any medium, provided the original author and source are credited.

When there is a packet loss in given network, it cannot change the route all by itself. Administrator manually have to configure the given network and thereby provide access to the router which has efficient route to the client. By using Hot standby routing Protocol (HSRP), it automatically configures the router (also called auto redundancy) which is facing user traffic, with router which has highest priority after active router. It is enabled through HSRP. It reduces network congestion and enables soft operation. We use Open short path first (OSPF) protocol in this project as it has higher convergence rate which leads to very less packet loss. Based on the IP address present in the IP packet header, OSPF transmits the packets. Our main agenda of the project is to reduce packet loss and provide efficient transport of information to the clients who expect more accuracy round the clock and also provide auto redundancy, low cost.

Hot standby routing protocol (HSRP) is non disruptive failover IP traffic mechanism designed to provide a gateway to packets. In general scenario, there is a first hop router configured with default gateway between the user and rest of the network. If this gateway fails, then users under same subnet of network lost connection with other subnet. In such circumstances, HSRP protocol provides gateway redundancy.

It uses multiple routers as a single standby group or virtual router group. HSRP ensures that only single router is forwarding packets even though many routers are available.

While using HSRP, we rather find many routes in which IP packets can be forwarded. Open Shortest Path first (OSPF) Protocol will provide efficient route possible by using dijkstra’s algorithm. Advantages of using OSPF are its high convergence rate between routers. Hot standby routing protocol (HSRP) is non disruptive failover IP traffic mechanism designed to provide a gateway to packets. In general scenario, there is a first hop router configured with default gateway between the user and rest of the network. If this gateway fails, then users under same subnet of network lost connection with other subnet. In such circumstances, HSRP protocol provides gateway redundancy [1].

It uses multiple routers as a single standby group or virtual router group. HSRP ensures that only single router is forwarding packets even though many routers are available.

While using HSRP, we rather find many routes in which IP packets can be forwarded. Open Shortest Path first (OSPF) Protocol will provide efficient route possible by using dijkstra’s algorithm. Advantages of using OSPF are its high convergence rate between routers.

Active router is the one which is forwarding IP packets to the virtual router in first place. It shares same IP and MAC address with the standby router

Standby group acts as backup to the active router. If active router was disrupted due to planned are unplanned reasons, standby will provide gateway redundancy thereby providing robustness to the network.

In HSRP protocol, group of routers act as single virtual group to the hosts on LAN which is known as standby group or HSRP group. Even though many routers are available, only single router can forward the IP packets and rest of routers will form standby group. Both active and standby share same IP and MAC address. Standby group periodically sends hello messages to active router. If active router fails, standby will undertake duty of forwarding IP packets. During this transition, one of the routers from HSRP group will act as standby router [2].

Every router possesses priority number. If active router was disrupted, then router with highest priority will immediately undertakes duty of active router.

Preemption process will be delayed for specific time period in order to configure the router with routing table before becoming active router.

It enables another interface on the router for HSRP process to monitor to alter given group priority if it goes down. If given interface goes down due to disrupted router, then it reduce priority of given group so that highest priority group will become active and undertakes duty of forwarding IP packets.

• Easy to configure, the protocol does not affect the routing tables or hosts configuration.

• Traffic due to HSRP is minimal

• From security point of view, HSRP is very weak

Some IP hosts use dynamic routing protocols such as Routing Information Protocol (RIP) and Open Shortest Path (OSPF) in order to discover routes for forwarding IP packets. In this paper, we prefer OSPF to RIP as it has high convergence rate. Main advantage OSPF is that it only enter changes occurred in the routing table but not update entire routing table again and again OSPF [3,4].

OSPF (Open Shortest Path First) is a link state routing protocol. Because it is an open standard, it is implemented by a variety of network vendors. OSPF will run on most routers that doesn’t necessarily have to be Cisco routers. Routers using OSPF have to establish neighbor relationships before exchanging routes. As OSPF is a link state routing protocol, it doesn’t exchange routing tables instead it exchanges network topology. Using SFP algorithm, it calculates best path and add them to the routing table.

In Area 0, Backbone routers has one or more interfaces

Based on the network type, OSPF router can elect one router as designated router (DR) and Backup Designated Router (BDR). These router acts as central point for exchanging OSPF information. Each non DR or non BDR will exchange information only with DR or BDR instead of exchanging updates with every router. DR then distributes information about topology there by reducing OSPF traffic. Router with highest priority acts as DR. if DR fails or disrupted, BDR will act as DR.

ABR is located near the border between one or more OSPF areas making it arrival and departure point to distribute information to other area or backbone area itself thereby establishing a connection between them.

OSPF provide authentication to every OSPF message. This is usually done to prevent false routing information from rogue router and therefore causing a Denial-of-service-attack. Two types of authentication can be used:

OSPF areas are used to impose a hierarchy structure to flow of data over a network. Network using OSPF should have backbone area. It is a two level hierarchy consists of backbone area and all other areas. Areas are used to minimize OSPF traffic. Routers present in same area exchange information locally but summarize that routing information locally but summarize that routing information when advertising routes externally. Area Border Routers (ABR) is used to connect the areas. Each area has two routers Designated Router (DR) and Backup Designated Router (BDR).

It is main area in network using OSPF and it is always area 0. All others directly connected with Backbone Area. Network should ensure that there is zero possibility for backbone area to be splitted by any router. If it splits, Areas with more size can be unreachable.

This area has only connection with backbone area. The only route it receives is a default route from external area it must be backbone area. It allows totally stub area to communicate with rest of the network.

OSPF uses cost as metrics means it provides best path for forwarding packets in accordance with cost. Path that requires low cost will be selected in first place. It uses 100 Mbps as reference bandwidth for cost calculation. For example, 10 Mbps cable will cost 10.

OSPF convergence is extremely fast when compared to other protocols; this was one of the main features included within its initial design. To keep this desirable feature fully functional in your network, you need to consider the three components that determine how long it takes for OSPF to converge:

• The length of time it takes OSPF to detect a link or interface failure.

• The length of time it takes the routers to exchange routing information via LSAs, rerun the Shortest Path First algorithm, and build a new routing table.

• It will run on more routers as it is an open standard.

• It is complex to configure and to troubleshoot.

We use CISCO PACKET TRACER for simulation purpose. By using topology, we will calculate amount of packet loss in particular interval of time. We compare results by using HSRP in one case and without HSRP in another. By using ping command we can evaluate the amount of packet loss occurred and by using tracert command we can find the route in which packets are forwarded.

We constructed above topology without using HSRP and ping result is given below:

In the Figures 1 and 2, one of gigabit ethernet connection of R4 is disconnected and we will find amount of packet loss due to change in topology. 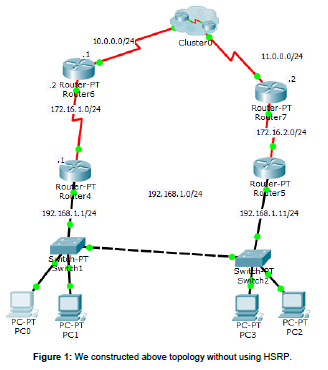 Figure 1: We constructed above topology without using HSRP. 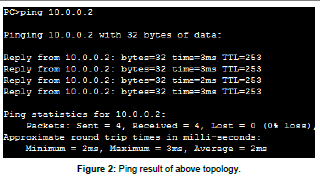 Figure 2: Ping result of above topology.

Now, if we run topology with ping command, It is observed from Figures 3-5 when changes in network topology takes place, packet loss is more as it can’t configure disrupted router without manual assistance. Above topology provides single path for forwarding packets and it can be traced using tracert command. 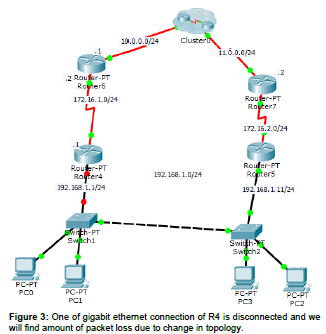 Figure 3: One of gigabit ethernet connection of R4 is disconnected and we will find amount of packet loss due to change in topology. 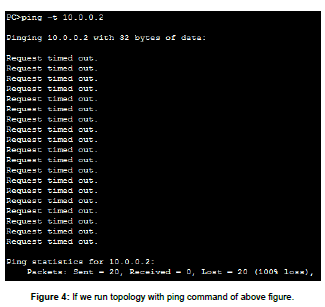 Figure 4: If we run topology with ping command of above figure. 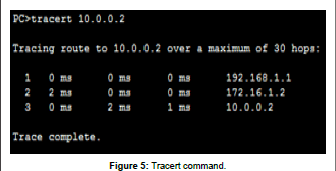 Topology with HSRP is constructed as shown in Figures 6 and 7. When we ping isp, the result is shown below In the above Figures 8-9, R1 acts as active router and R2 is standby router. R1 will forward packets and R2 acts as backup to R1. If R1 is disrupted, packet loss will not occur as R2 acts as a backup router. 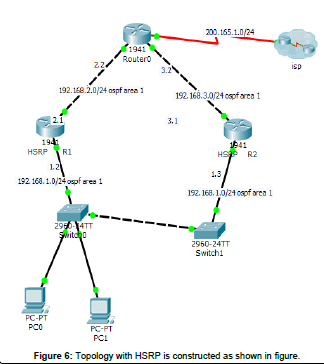 Figure 6: Topology with HSRP is constructed as shown in figure. 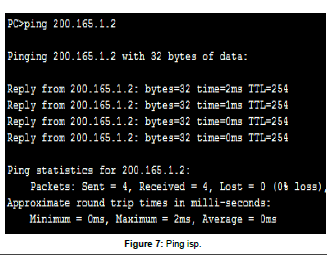 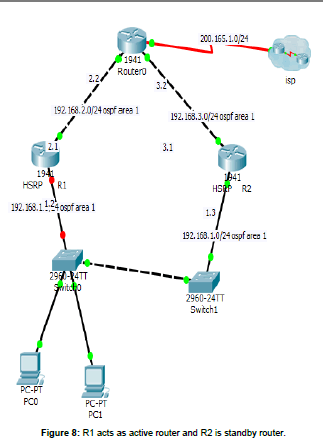 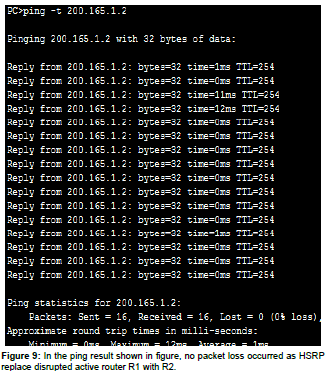 Figure 10: OSPF will change route for packet forwarding and it can be traced by using tracert command.

In the above topology, gigabit Ethernet connection of R1 router was disrupted. User can still possess connection with ISP through R2 router (Figure 10). In this instant, R1 will be a standby router and R2 will be a active router. By using HSRP, network will provide redundancy to default gateway thereby user can forward packets through R2 (Table 1).

Table 1: Tabular form of without HSRP and with HSRP.

Using HSRP, set of routers work in concert to present illusion of single virtual router to the host on the LAN. This set is known as HSRP group or Standby group. A single router from this group is responsible for forwarding the packets that host send to virtual router. HSRP reduces network congestion and ensures soft operation. We use OSPF dynamic routing protocol as it has high convergence rate. With features of preemption and preempt delay, HSRP provide robustness to the default gateway thereby reducing packet loss. Even though many routers are available in HSRP group, only one router will forward packets and other router acts as standby router in order to reduce IP traffic. Without HSRP, when topology of network changes packet loss is 100% and almost zero possibility for packets to reach destination. Meanwhile, by using HSRP along with OSPF reduce packet loss to almost negligible percentage which is expected by many sections of community now a day. By using CISCOPACKET TRACER, we simulate topology with HSRP and without HSRP separately and successfully achieve perfect results.