Copyright: © 2012 Naimy VY . This is an open-access article distributed under the terms of the Creative Commons Attribution License, which permits unrestricted use, distribution, and reproduction in any medium, provided the original author and source are credited.

The copula theory is a fundamental instrument used in modeling multivariate distributions. It defines the joint distribution via the marginal distributions together with the dependence between variables. Copulas can also model dynamic structures. This paper offers a brief description of the copulas’ statistical procedures implemented on real market data. A direct application of the Gaussian copula to the assessment of a portfolio of loans belonging to one of the banks operating in Lebanon is illustrated in order to make the implementation of the copula simple and straightforward.

The concept of “copulas1” was named by Sklar [1]. In statistics, the word copula describes the function that “joins” one dimensional distribution functions to form multivariate ones, and may serve to characterize several dependence concepts. It was initiated in the context of probabilistic metric spaces. Copulas function became a popular multivariate modeling tool in financial applications since 1999 [2]. They are used for asset allocation, credit scoring, default risk modeling, derivative pricing, and risk management [3,4]. They became more and more popular because as proven, the returns of financial assets are non-Gaussian and show nonlinearities; therefore, copulas became an imperative modeling device in a non-Gaussian world. They implement algorithms to simulate asset return distributions in a realistic way by modeling a multivariate dependence structure separately from the marginal distributions.

Where C is the copula function and Fi, i = 1, ..d, are the margins. In most cases the latter function is uniquely defined by (1.1).

1The word copula, resp. copulare, is a latin noun, resp. verb, that means “bond”, resp. “to connect” or “to join”. Th e term copula is used in grammar and logic to describe that part of a proposition which connects the subject and predicate.

Using copulas is attractive to practitioners because even under increasing transformations of the margins, copulas remain invariant. This requires the completion of two steps: modeling each univariate marginal distribution then specifying a copula that recapitulates all the dependencies between margins.

In this paper our aim is to simplify the implementation of copulas for the Lebanese banks since none of which is using copulas for risk assessment. Section 1 introduces the model that generates the copula through the Archimedian and elliptical copulas. Section 2 illustrates the use of the Gaussian copula in the assessment of a portfolio of loans belonging to one of the banks operating in Lebanon. Section 3 draws some concluding remarks.

Definition and Families of Copulas

The quantification of dependence in finance has led to the development of copulas. Copulas are now witnessing increasing interest in many areas of risk analysis. The rank order correlation2 used by most Monte Carlo simulation tools is certainly a meaningful measure of dependence but is still limited in the patterns it can produce.

As described in the introduction, copulas offer an efficient flexible procedure for combining marginal distributions into multivariate distributions and are able to deduce the real correlation pattern. The purpose of this paper is not to go through the explanations and proof of the mathematics related to copulas (that can be found in any related book), we will rather simplify the concept and depict what is just needed to run an analysis using the copula.

2The rank order correlation coefficient uses the ranking of the data, i.e. what position (rank) the data point takes in an ordered list from the minimum to maximum values, rather than the actual data values themselves. It is therefore independent of the distribution shapes of the data sets and allows the integrity of the input distributions to be maintained. Spearman’s rho is calculated as:

and where ui, vi are the ranks of the ith observation in samples 1 and 2 respectively. The correlation coefficient is symmetric i.e., only the difference between ranks is important and not whether distribution 1 is being correlated with distribution 2 or the other way round.

Because the copula of a multivariate distribution describes its dependence structure, we can use measures of dependence such as Kendall’s3 tau and Spearman’s4 rho, as well as the coefficient of tail dependence, which are copula-based. The relationship between Kendall’s tau t of two variables X and Y and the copula C(u,v) of the bivariate distribution function of X and Y gives a tool for fitting a copula to a set of data. This consists in determining Kendall’s tau then applying a transformation in order to get the appropriate parameters for the fitted copula.

3Kendall’s tau and Spearman’s rho provide the best alternatives to the linear correlation coefficient as a measure of dependence for nonelliptical distributions, for which the linear correlation coefficient is inappropriate and often misleading. For more details we refer to Kendall and Stuart [6], Kruskal [7], Lehmann [8] and Capéraà and Genest [9].

Kendall’s tau for a two observed sets of variables is given by:

Perfect disagreement between the two rankings means that the coefficient has a value of -1.

For all other arrangements, the value lies between -1 and 1, 0 meaning the variables are completely independent.

4Kendall’s tau and Spearman’s rho are both carried out on the ranks of the data as explained and defined in note 2. That is, for each variable separately the values are put in order and numbered.

The most frequently used copula families are the elliptical and Archimedean copulas. Table 1summarizes and compares the two families.

Table 1: Comparison between the most frequently used Copulas.

5The normal copula is given by:

6The Student-t copula is an elliptical copula defined as:

Where v (the number of degrees of freedom) and ρ (linear correlation coefficient) are the parameters of the copula. When v is large (greater than 30) the copula converges to the Normal copula just as the Student distribution converges to the Normal. In the opposite case, the behavior of the copulas is different: the t-copula has more points in the tails than the Gaussian one and a star like shape. A Student-t copula with n = 1 is sometimes called a Cauchy copula.

7It is an asymmetric copula, exhibiting greater dependence in the negative tail than in the positive. This copula is written as:

The relationship between Kendall’s tau τ and the Clayton copula parameter α is given by:

8It is a symmetric copula given by:

The relationship between Kendall’s tau τ and the Frank copula parameter α is given by:

9The Gumbel-Hougard copula is asymmetric, exhibiting greater dependence in the positive tail than in the negative. It is given by:

The relationship between Kendall’s tau τ and the Gumbel copula parameter α is given by:

10This constraint can be solved by calculating tau for each pair and then using the average (Figure 1). 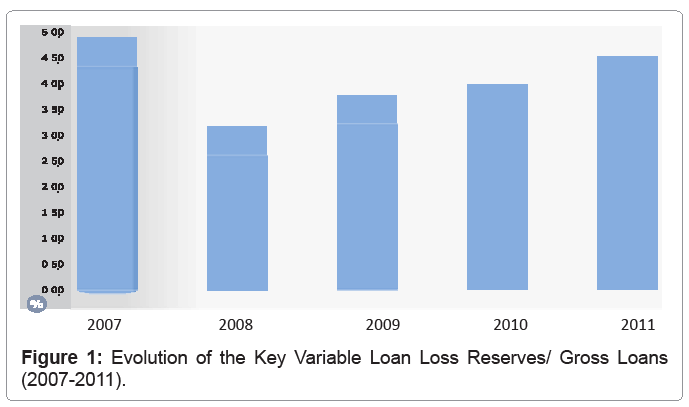 The purpose of this section is to illustrate a direct example on how to implement a one factor model of the Gaussian copula (normal copula) on a portfolio of loans belonging to a Lebanese bank operating in Lebanon [10].

The portfolio is constituted of 30 different companies. We define Ti(1 ≤ i ≤ N) as the date upon which the company will default. We consider that all the studied companies in the portfolio can eventually default [11] however; this cannot happen except over long periods sometimes exceeding 50 years or more.

Qi is the distribution of Ti. In order to define a correlation structure among the Ti based on a one factor model of a Gaussian copula, we have transformed each variable, percentile per percentile, into a Ui variable, following a standardized bivariate distribution. We followed the below factorial model (one factor model) for the correlation structure

Where F and Zi follow a normal distribution N(0,1). The link between Uiand Ti implies:

According to equation (2), the probability of Ui< U conditional to the value of F is:

In order to simplify the reasoning process, we can assume that the time distribution of default Qi is the same for each i and equals Q. We also assume for simplicity purpose that the copula correlation between each pair of companies is the same and equals ρ. In this case, for each pair of companies i and j, the correlation is aiaj, which means that for each i, ai = √ρ. Therefore we can rewrite equation (5) as follow:

For a portfolio constituted of a huge number of loans, this equation offers a valid approximation of the proportion of companies that can default on date T. We name this proportion the default rate. When F decreases, the default rate increases. Therefore what is the cap level that this rate can reach? Since F follows a standardized bivariate distribution, the probability for F to have a value less than N-1(Y) is Y. Therefore, there is a probability Y for the default rate to be greater than:

This output has been first developed by Vasicek [12].

If we assume that the total value of the loan in USD is L and the recovery rate in case of default is R. The VaR of a loan over a horizon period of T and a confidence level of X is:

We were able to analyze the loan portfolio of a Lebanese bank operating in Lebanon. For discretion purpose we will omit the name of the bank however, the below tables 2, 3 and figures 2,3 are enough to give an idea about the portfolio details and the financial performance of this bank. The main purpose of this section is to directly implement the Normal copula model in order to measure the expected loss on a portfolio of loan.

Table 3: Description of the Portfolio. 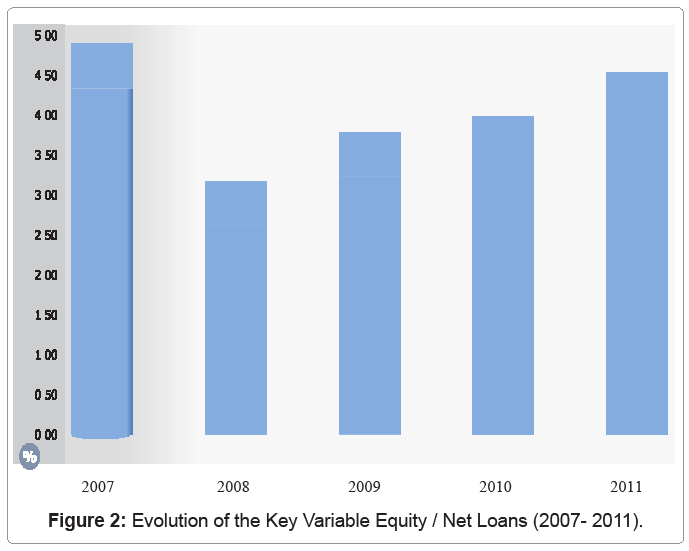 The total amount of loan on which we applied the model is USD 56.4 millions. Based on our observation we have been able to determine a default probability over a horizon period of one year of 2%. The recovered amount in case of default was quantified by the bank at a level of 72%. Using the Vose Software12 we deduced a copula correlation rate of 0.1.

Based on the above and according to equation (7):

In other words, the bank is 99% confident that the default rate cannot exceed 12.8%. Therefore the Value at Risk, VaR, or the losses cannot exceed:

This work showed how the Gaussian copulas theory can be very powerful tool in estimating the expected losses on a portfolio of loans.

Despite all the benefits of copula models, specifying a copula that recapitulates all the dependencies between margins suffers from some statistical pitfalls especially for most of multivariate financial series. This is due to temporal dependencies such as serial autocorrelation, or time varying heteroskedasticity, etc. Further research must be done in order to broaden the scope of implementations to higher dimensions while considering the limitations of copulas in general.