Copyright: © 2015 Chiangga S, et al. This is an open-access article distributed under the terms of the Creative Commons Attribution License, which permits unrestricted use, distribution, and reproduction in any medium, provided the original author and source are credited.

Spintronic device concept has been established almost two decades, where the researches have been involved in solid-state electronics. Nowadays, the Spin-based nanoelectronic devices such as GMR valves, magnetic tunnel junctions, semiconductor spin transistor devices and quantum bits based on spins have been the challenging and exciting devices with various attractive performances such as the low energy consumption and the high density integrations. Moreover, recently, the microwave devices based on the dynamical spin properties have been considerable attention because of its fast time scale less than subnano second and its flexibility. Especially, since a few GHz operations are the physical upper limit of the devices based on the surface acoustic wave which is commonly utilized in the present device, a microwave device based on the dynamical spin properties with higher operation frequency is a timely demonstration. Moreover, the development of high-performance microwave spintronic devices makes an innovation not only in the telecommunications, but also in the sensing devices such as healthcare, military, security and applications. In fact, a coherent magnetization precession with a frequency characterized by a spin wave has been considered as next-generation on-chip microwave filter devices. However, because of the influence of the boundary or the edge of the ferromagnet, the magneto-static interaction, which is a key for stabilizing the spin wave, becomes inhomogeneous, especially in nanostructured devices. As a result, the miniaturization of the microwave spin device is an important milestone.

The development of a high performance spin wave resonator by using a ferromagnetic metallic nano ring can be realized, from which a ferromagnetic nano ring is fabricated by using an ultra-high precision electron-beam lithography system, which has been installed in Kyushu University. The ring diameter is systematically varied from whose diameter is varied from 100 nm to 1 micron and the width is 50 nm or less. The amorphous Permalloy or CoFeB films are deposited by the ultra-high-vacuum evaporation system. The spin wave will be excited by the current-induce Oersted field using a nonmagnetic Cu strip and/or spin transfer torque induced by a local pure spin current injection. We will stabilize the standing spin wave by superimposing the propagating magnetostatic backward volume waves in opposite direction. The frequency dispersion of the resonant peak should be less than Hz range, which is much smaller than the spin wave in the conventional ferromagnet and is comparable to the ferromagnetic YIG film.

After the demonstration of the sharp resonant peak and its frequency tenability, the use of a panda ring resonator will be exploited with various applications. Here, a panda ring resonator consists of the main nano ring resonator with two nano ring resonators, as schematically shown in (Figure 1). The generation of the spin wave in the main resonator will nonlinearly excite another magnetostatic backward volume wave in the side rings with a specific wave length. These nonlinear responses provide innovative operation schemes of the spin current circuits, leading to the novel spintronic devices such as spin-current amplifier and ultrafast spin logic circuit. 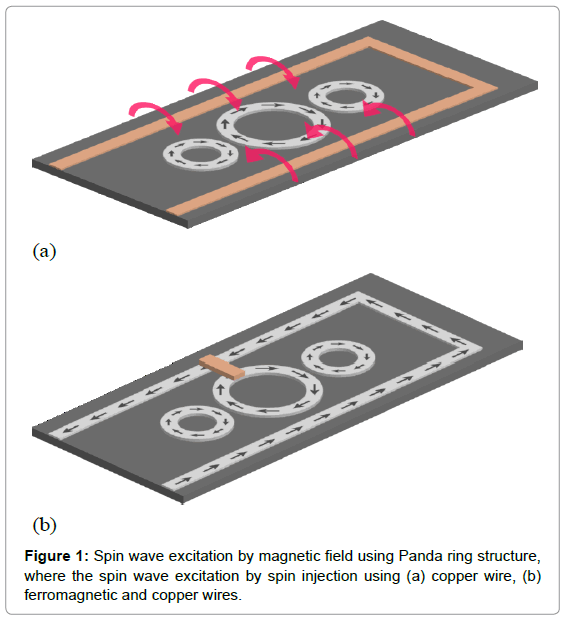 In conclusion, such a spin wave (spintronic) device can be used and replaced the former electronic devices without any charge conservation requirement, in which the device material can be metal, insulator or semiconductor. By using the panda ring structure similarly to the optical device applications [1-7], then all designed and manipulated devices can be fabricated, tested and used by the metallic device based spintronics.