Copyright: © 2016 Sappajak S, et al. This is an open-access article distributed under the terms of the Creative Commons Attribution License, which permits unrestricted use, distribution, and reproduction in any medium, provided the original author and source are credited.

From theory of every things by Hawking [1] and Buddhism [2] made considering that all things consist of universe, neutral world and black hole. The Big Bang is the origin of time and the exchange and transfer of energy between black holes and cosmic energy including the coupling energy between them called the neutral world. Formerly, a pair of universe is a black hole, from which the gravity is very high or a very slowly in time. Actually, the neutral world is within in the middle, which is the world there is no time (or no gravity), from which the spirit of Buddha (or Buddhist nirvana) is localized because the spirit of nirvana person is stationary (immortal or frozen) with the constant energy, thus, whenever the spirit falls under the changed spirit (or time), it is not stable, it is caused by craving or passion, which will be oscillated (moved). However, its total energy is always constant, while the spirit power can be changed. We are now believed that the two basic elements called string and spirit are the most basic of matter and life that dominated matters and all forms of life. The existence of string can be explained by the Unified Field Theory, where now spirit would have done as well, therefore, the combination of the world of the neutral world with universe and black hole is become the Grand Unified Field Theory or Theory of Every Things.

After the Big Bang, the embryo spirit is localized in the Hilbert space and entered into the parent forehead, through the 3rd eye, which is the nerve center similarly the satellite disk feeder operation. Generally, the embryo water comes from the mother (blood type), earth by father. The five aggregates with spirit, which is the sum of all worlds in the birth and death cycle. The spiritual vibration in the embryo brain in the form of two-level atom called Rabi oscillation [3], and then it is connected to the entire networks. In this paper, the corporation among universe, black hole and neutral world is proposed and described in terms of total energy, which is conserved. We define the spirit that is the vector function, is localized in Hilbert space, which can be described by using the Rabi oscillation concept, from which the two-level atom energy transition states of photon is proposed to describe the oscillation, from which the time dependent Schrödinger equation is used to accommodate the photon traveling within the brain [4], where in application, the energy transition of higher energy levels is also discussed, which can be used for the meditation energy level interpretations. To describe, how life is formed? We can make the description that the spiritual signal is entered into the embryo, which is formed by the four element and five aggregates. The next of kin is formed by the parent fertilizations, where the spirit is entered into eggs or sperm to form the embryo and embedded within the oval via the parent forehead, where the resonant one will be formed the life after fertilization. The spirit signal is begun by a tiny spot and linked to brain and entire body, where the spirit signal is oscillated by the Rabi oscillation. Each spirit signal is oscillated with frequency ν under the two-level atom energy transition states [5]. The two-level atom of spirit signal with energy is nhυ, n=1, 2, h is the Plank’s constant. In the meditation, the energy levels can be changed, for instant, the contemplation has the power of meditation that will be held from the 1st to the 8th energy states, but the total energy is still constant. Perception energy level is very detailed [2], up from 1st-16th level. After mystics and energy levels are very fine, where the light is bright or energy continued to be enlightened.

In this short comment, the use of a spirit signal oscillation within a circular like motion is used to model and present the brain signal propagation, which is analogy the coherent light (photon) traveling within the circular like path motion. In Figure 1, the traveling photon (ψ) within a brain with potential energy function(V), which can be described by the Hamiltonian as

, which is the standard Schrödinger equation, but in this case is the space invariant case, therefore, it is the time dependent Shrodinger equation, Therefore, the spirit traveling in brain can be expressed by the equation as [6]

From the above equation and Figure 2, V is the spirit transient energy introduced by the personal passion or craving. The spirit signal is formed by a soliton pulse at the same time with the origin of time [7]. In which A and Z are the soliton amplitude and circulation distance within the being brain and entire body, respectively. T is a soliton pulse traveling time in a frame moving at the group velocity, T= t−β1Z, where β1 and β2 are the coefficients of the linear and second-order terms of Taylor expansion of the propagation constant is the 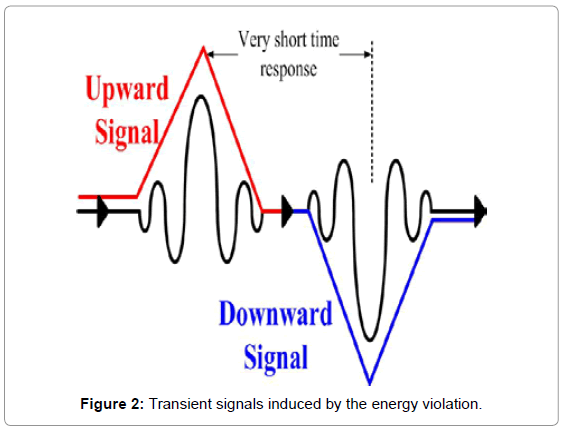 From the above potential energy equation, where a is real value, k is a constant, the time interval of the spirit oscillation is t1 ≥ t ≤ t2. By using the standard Schrodinger equation, the solution can be solved and used for various applications such as brain, computer and quantum brain applications. Now we consider, case (i) when ψnΔE,Δt ≠0 is presented the Abstract (spirit and aggregates) in Buddhism, which is localized in Hilbert space after death, while Form (spirit, five aggregates are returned to Hilbert space, four elements are returned to earth, case (ii)

is represented the enlightened and nirvana situation [8], where, Δt → 0 the spirit is under the stopping or freeze (no time) [9], ΔE → 0 represents the enlightened situation (no passion), where the spirit and aggregates are vanished, while the Abstract is localized in the neutral world, the four element is turned to be relics, and (iv)

represents the delightful, where the optimum energy values of each human temper situation. The same condition in all cases is

In Figure 1, the brain signal analogy can be manipulated by using light pulse (soliton) with wavelength 1.55 μm entering into a ring resonator with center ring radius is 10.0 μm, the input power is 1 W. The coupling effect into the system can be configured by placing the side ring with radius of 5.0 and 4.9 mm, from which such a device called a Panda ring resonator [7], the ring resonator material used is the nonlinear semiconductor material known as an InGaAsIn/P. The output can be obtained in the form of whispering gallery mode (WGM) or the output port, which can be linked to the brain signals for further investigations. Figure shows the brain signal obtained that can be used as a sensing signal, where the brain in this case is performed the sensing device called an interferometer. Figure 2 shows the potential energy violation that can cause the spirit signal movement. Figure 3 shows the simulation data of the brain signal manipulation that can be used to be interpreted as the brain sensor and interferometer, which is useful for all cases of brain sensing applications. In Figure 1, the proposal of an instrument of this measurement aspect is also given [10], from which the brain signals can be obtained and changed to be the time domain signals via the Fourier transform, which can present the brain or spirit signals and be solved by the time dependent Schrodinger equation (Figures 1-3). 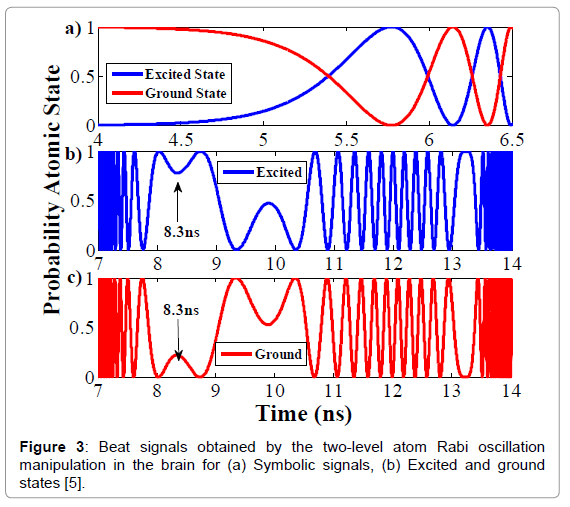 Figure 3: Beat signals obtained by the two-level atom Rabi oscillation manipulation in the brain for (a) Symbolic signals, (b) Excited and ground states [5].

In conclusion, the Big Bang is the origin of time and the exchange and transfer of energy among black holes, cosmic energyin the universe and neutral world, where the spirit and five aggregates are localized in the middle world i.e., between the universe and black hole, where the spirit vibration is caused by time. Before the explosion, the universe and black holes have the coupling energy in the neutral world. The spirit vector function is localized in Hilbert space and described by using the Rabi oscillation concept, from which the two-level atom energy transition and localized are proposed and described, which is described by using the solution of time independent Schrodinger equation. In applications, the energy transition of higher energy levels is also known, which can be used for meditation level interpretation. Furthermore, the applications such as (i) computer, information and language, (ii) sensors and interferometer, (iii) signal processing and interpretation, (iv) meditation and Vipassana meditation, delightful, (v) medical therapy and diagnosis, (6) metaphysics and thermodynamics, (7) telepathy and (8) super natural power can be also interpreted and investigated.