Generation of Shear Waves in a Soft Medium Using an OPO that Emits 2.1 μm Wavelength as Light Source

We present a scheme for conversion of pulsed light from 1.06 to 2.1 μm using a periodically poled ferroelectric crystal within a resonant cavity in which Optical Parametric Generation (OPG) nonlinear optical process occur when pumped with a pulsed Nd:YAG laser. This device emits 9 ns pulses of over 300 μJ and is a viable source for use with PhS-OCT system for generation of shear waves in a soft medium.

Optical coherence tomography (OCT) is a noninvasive technique capable of imaging tissue microstructure at high spatial resolution [1]. PhS-OCT is an OCT based technique which can be used to detect surface acoustic waves propagating on skin and cornea surfaces, leading to quantification of the elasticity of underlying tissues [2]. For generating shear waves propagating within a soft medium a piezoelectric actuator are used [3].

Because tissue presents high absorption for electromagnetic waves at ~2 μm wavelength, in this work we propose a simple device that emits nanosecond pulses at a wavelength of 2.1 μm as an alternative for shear wave’s generation. This device is based on a periodically poled ferroelectric crystal pumped with aNd:YAG pulsed laser source to obtain the emission. The conversion from 1.06 to 2.1 μm was achieved by optical parametric generation (OPG) at degeneracy point where signal wave with 2128 nm wavelength was generated.

Design of the Source of Radiation

The simplest parametric process which occurs inside a nonlinear medium is the optical parametric generation where energy from an input pump wave with angular frequency ωp is transferred to two output waves of different angular frequencies named signal ωS and idler ωi while optical energy is always conserved and so ωp=ωS+ωi. According to quantum mechanics in this process a single high energy photon is splitted by a nonlinear medium into two low energy photons.

This kind of nonlinear phenomena combined with quasi-phase matching technique is very useful because we can design a periodically (or aperiodically) poled ferroelectric crystal to obtain an emission like lasers but with any desired wavelength. To increase the conversion efficiency from the pump beam to the signal or to the idler beam a resonant cavity can be used but energy of non-desired beam is "wasted".

For ourwork we convert pulses from 1064 nm to 2128 nm with quasi-phase matching technique obtained with a periodically poled lithium niobate crystal (PPLN) pumped with aNd:YAG laser source. We designed a crystal with ferroelectric domains such it produces optical parametric generation at the degeneracy point, i.e., the signal and idler wavelengths are the same so ωs=ωi=ωp/2 and then λp=2128 nm, twice the wavelength of pump source.

Let AP and AS be the electric field amplitudes of the pump and signal waves with angular frequencies of ωP and ωS and KP and KS their corresponding wave vectors where the magnitudes of this wave vectors are given by K=ωn/c, being n the refraction index and c is the speed of light. Assuming that the two waves are co-propagating along the same direction we can deduce the coupling among the waves from wellknown Maxwell’s equations:

where np and ns are the refractive indices of the pump and signal waves, z is the distance along the propagation direction of the waves,

This propagation constant is non-zero and therefore this limits the coupling of the fields which consequently reduces conversion efficiency. To increase the coupling efficiency, the nonlinearity

must have a non-negligible Fourier component for the process [4,5], given by

Where L is the length of the nonlinear medium. Using this and considering the two waves with extraordinary polarization, we design a PPLN that follows

We create a periodically poled lithium niobate crystal (PPLN) that has the appropriate Fourier component using standard photolithographic and electrical poling techniques [6] onto a 500 mm thick, z−cut LiNbO3 wafer and the resulting crystal was placed in the experimental setup shown in Figure 1. As a pump we used aNd:YAG laser that emits 12 ns long (FWHM) pulses with a repetition rate of 10 Hz. We used a half-wave plate (λ/2) and a Glan–Thompson polarizer (P) to vary the energy of the pump beam. For increase the efficiency conversion the PPLN crystal was placed in a resonant cavity formed by two flat dielectric mirrors which are highly reflective (∼90%) at the signal wavelength and highly transmitting (∼99%) at the pump wavelength. The pump beam was focused to an elliptical cross-section (0.34 mm × 2.8 mm, FWHM) by using a pair of lenses, a 400 mm focal length spherical lens (L1) and a 100 mm focal length cylindrical lens (L2). A Filter at the output can be placed for allow pass only the wanted emission. 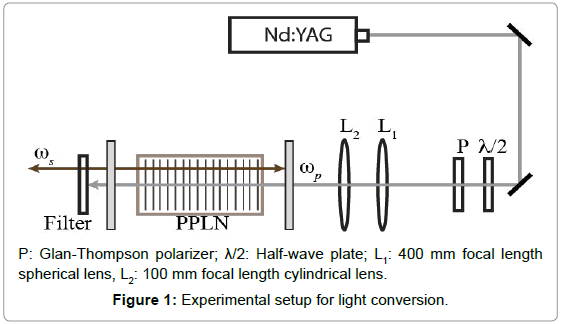 We do not have an IR spectrophotometer for analyze the spectral component of the output beam at this region however if we take out the filter placed at end of experimental setupa very weak red light is observed and their spectral component detected by a VIS spectrophotometer is centered at 709 nm wavelength (Figure 2). This red light is due to Sum Frequency Generation nonlinear process between pump and signal waves. Let ωr the angular frequency of red light observed, by conservation of energy law for the SFG process we obtain that

and so we can deduce the wavelength of the signal wave being 2.1 μm. More details about red light observed are explained [5].

Using appropriate Filter, we block all unwanted spectral components and the energy of the 2.1 μm wavelength emission was measured. The output energy per pulse at 2.1 μm vs. pump energy is shown in Figure 3. The threshold is around 0.3 mJ and we are obtaining ~300 μJ of energy for the 2.1 μm wavelength when the crystal was pumped with 8 mJ of energy.

By other hand, we use agar-agar powder to produce tissuemimicking phantoms and we use the experimental setup shown in Figure 4 to verify if our output beam can be used for shear wave’s generation instead a mechanical actuator. Agar is an easily accessible material that can be used to produce tissue phantoms with controllable mechanical properties like those of human soft tissue; a few drops of milk are added as scattering particles to facilitate OCT detection. We use the PhS-OCT system described [3] for our experiments but, of course replaced the mechanical actuator by the 2.1 μm wavelength emission focused on the sample by a spherical lens. 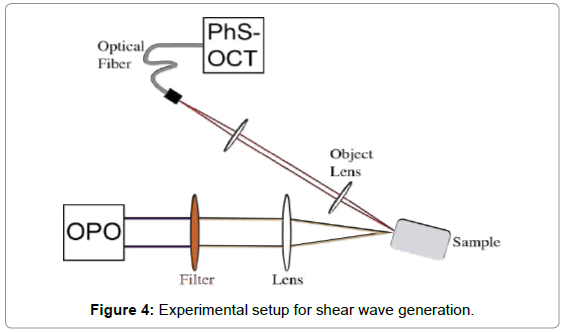 After several experiments, we observed that in fact we can produce shear waves in tissue phantom with the 2.1 μm emission. Figure 5 shows wave propagation pattern in agar phantoms detected by our PhS-OCT System when we pump with (a) 6 (b) 7 and (c) 8 mJ of energy, these results suggest that we need around 300 μJ of the 2.1 μm emission for produce shear waves inside tissue phantom. Of course, we can pump the tissue phantom with more energy for achieve better shear waves, however, due to limitations in our pumping laser used for this experiment we could not obtain more than 8 mJ of pumping energy.

Figure 5: Wave propagation pattern inside tissue phantom for (a) 6 (b) 7 and (c) 8 mJ of pumping energy.

Since the maximum pump energy that can be used is determined by the damage threshold of the PPLN crystal, which is approximately 3 J/cm2, pumping the PPLN crystal with higher energy would not be a problem. Theoretically with the lenses arrangement indicated in Figure 1 we can pump the PPLN crystal up to ~33 mJ of energy.

In conclusion, we made a simple, inexpensive device that emits nanosecond pulses of broadband 2.1 μm radiation, based on optical parametric oscillation at the degeneracy point in a periodically poled lithium niobate crystal. We obtained more than 300 μJ of radiation at 2.1 μm with 8 mJ of pump energy at 1.06 μm. The resulting emission can be used for shear wave generation in PhS-OCT technique for which we need at least 300 mJ of energy for shear wave generation.

This work was supported by CONACyT (México). The authors would like to acknowledge R. Cudney for lending us the equipment for crystal poling, cutting and polishing. Also, we gratefully thank all members of Biophotonics and Imaging Laboratory (University of Washington) for lending us the PhS-OCT system.

Copyright: © 2017 Martínez LO, et al. This is an open-access article distributed under the terms of the Creative Commons Attribution License, which permits unrestricted use, distribution, and reproduction in any medium, provided the original author and source are credited.