Granulomatosis with Polyangiitis in Patient with Crohn’s Disease

Copyright: © 2017 Mohamed AK, et al. This is an open-access article distributed under the terms of the Creative Commons Attribution License, which permits unrestricted use, distribution, and reproduction in any medium, provided the original author and source are credited.

Granulomatosis with polyangiitis and Crohn’s disease are two distinct chronic inflammatory diseases that may involve various organ systems, including the alimentary tract and the oropharynx. In both diseases there is an association with different types of anti-neutrophil cytoplasmic antibodies. We describe a patient previously diagnosed with Crohn’s disease, presenting 20 years later with a rapidly progressive glomerulonephritis and histological evidence of crescentic glomerulonephritis and surrounded by severe interstitial inflammatory infiltrate, ultimately diagnosed as having granulomatosis with polyangiitis.

Granulomatosis with polyangiitis (GPA) called Wegner granulomatosis [1] is a multisystemic disease of unknown etiology characterized by necrotizing vasculitis and granulomatous inflammation. Although, the gastrointestinal tract can be involved in this vasculitis, the association between GPA and Crohn’s disease (CD) exists and was previously described. We report the case of a 50-year-old Moroccan white female previously diagnosed with CD, presenting 20 years later with a rapidly progressive glomerulonephritis and histological evidence of renal granulomas and ultimately diagnosed as having GPA. There was no evidence of a flare of her CD.

A 50-year-old woman was admitted to our hospital because of severe acute kidney injury, and profound fatigue. 20 years previously she had been admitted because of a fistula to her right groin. An explorative laparotomy revealed terminal ileitis, and a right hemicolectomy was performed. The histological diagnosis was CD, based on transmural inflammatory process including fissure ulcers and the finding of many lymphoid follicles in the subserosa with several non-necrotizing granulomata. She was subsequently treated for two years with Mesalazine (2 g per day per os) with good response and resolution of the diarrhea. A follow-up colonoscopy performed 5 years prior to her present admission was normal.

At the present admission, she had no abdominal pain or diarrhea and was not taking any medication. Physical examination demonstrated normal vital signs. Examination of the heart, lungs, abdomen and neurological system was normal. There were no apparent extra intestinal manifestations of inflammatory bowel disease.

The renal biopsy demonstrated involvement of essentially all glomeruli by necrosis. Approximately 80% of glomeruli had cellular crescents (Figure 1). There was focal disruption of Bowman’s capsule. Most glomeruli had prominent adjacent periglomerular inflammation, including occasional multinucleated giant cells. Arteries and arterioles had moderate sclerosis as well as focal necrotizing vasculitis (Figure 2). Immunofluorescence demonstrated positivity with antibody to fibrinogen (Figure 3). 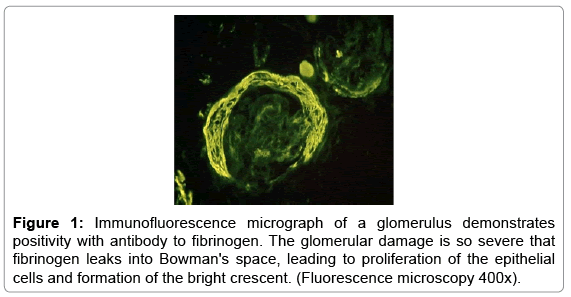 Figure 1: Immunofluorescence micrograph of a glomerulus demonstrates positivity with antibody to fibrinogen. The glomerular damage is so severe that fibrinogen leaks into Bowman's space, leading to proliferation of the epithelial cells and formation of the bright crescent. (Fluorescence microscopy 400x).

Figure 2: Arteries and arterioles had moderate sclerosis as well as focal necrotizing vasculitis.

The patient was diagnosed with systemic GPA. She was initially treated with cyclophosphamide IV 500 mg/m2 (J1, J15, J30,) and prednisone 60 mg/day after 3 bolus 750 mg, which was reduced to 30 mg/day over a 3 month period and gradually tapered down. Plasma exchange was not indicated [2,3]. Amelioration of renal function creatinine at 180 umol/L after 30 days. The patient’s fatigue disappeared within a short time.

There have been few reports of an association between inflammatory bowel disease, mainly ulcerative colitis, and GPA [4]. CD and GPA share several clinical features: both can present as a gastro-intestinal tract disease, both can involve the oropharynx, the extra- intestinal manifestations of CD can mimic common symptoms of GPA such as arthralgia, fever, skin abnormalities and weight loss, and both are associated with ANCA [5].

The patient we describe had been diagnosed with CD 20 years prior to her present admission. The diagnosis had been based on the clinical presentation and pathological finding following surgical resection. The patient’s disease responded very well to treatment with Mesalazine and for the previous 6 years her disease was in complete remission. The present positive p-ANCA result might provide further corroboration for the diagnosis of CD [6].

The patient was recently diagnosed as suffering from GPA. Crescentic glomerulonephritis and severe interstitial inflammatory infiltrate, subsequent development of episcleritis and the finding of c-ANCA supported this. The histological findings of granulomatous vasculitis renal define the systemic nature of this patient’s disease.

The presence of granulomatous vasculitis, the extensive necrosis, the type of granulomata, the presence of c-ANCA and the lack of intestinal inflammation indicate that our patient developed GPA rather than an extraintestinal complication of Crohn’s disease. A pathologic review of the surgically resected colonic tissue did not reveal evidence of vasculitis or granulomas typical of GPA.

C-ANCA are an antibodies directed primarily against proteinase-3 in neutrophil azurophilic granules. The reported sensitivity of c-ANCA for GPA is between 32% and 92% with a pooled sensitivity of 66%, and the reported specificity 88% to 100% with a pooled specificity of 98% [7]. Other conditions in which positive c-ANCA results have been reported include tuberculosis, Hodgkin’s lymphoma, HIV infection, microscopic polyangiitis and monoclonal gammopathies. It has been suggested that c-ANCA might be essential in the pathogenesis of GPA, however in about 30% of patients with the active limited form of the disease c-ANCA might not be detectable. Whether c-ANCA has a primarily pathogenic role or whether it may augment the immune inflammatory process is unclear.

In summary, while the association between CD and GPA appears to be extremely rare, it should be considered a diagnostic possibility in patients with either disease who present new symptoms that are not typical of the existing diagnosed disease. The distinction between the two conditions and their possible coexistence requires histological examination of involved tissue.