Copyright: © 2014 Saktioto T et al. This is an open-access article distributed under the terms of the Creative Commons Attribution License, which permits unrestricted use, distribution, and reproduction in any medium, provided the original author and source are credited.

Graphene has become a novel semiconductor material, which has many distinguishing material properties such as zero band gap, ultra high electron mobility and ultra-small optical dispersion [1-3], which determines its broad future as candidate material for photodetectors, solar cells and displaying [4-6]. Based on well-designed experiment, in which the transmission rate of graphene-quartz samples obtained with different incident angles at both 632.8 nm and 1550 nm light source. Angle change insensitivity in transmission rate is witnessed when incident angle is lower than 50°, however, there would be sharp increasing when incident angle is larger than 50°. Fresnel model and universal conductance model calculated with transmission line algorithm are applied in characterizing the experiment data. Graphene’s optical model and its accurate parameters such as refractive index or optical conductance are acentric. The significant complement towards the current graphene research in optics and photonics which is reported that the angle dependence of graphene’s optical properties is crucial importance for future photonic application such as photodetector and transparent electrodes.

In the classic Fresnel theory [1-3], graphene layers with certain thickness can be viewed as a dielectric layer and the typical three-layer graphene sample structure (air-graphene layers-substrate) has been illustrated in the normal incident case. Computing Fresnel model with incident angle changes from 0° to 90° would involve more complex algorithm like transform matrix. As the other theory modeling graphene’s optical properties, calculating the universal conductive model of graphene would entail the solution of a system with an infinite-thin conductive membrane; it is a different algorithm from the Fresnel model. Most of the interesting graphene or graphite’s refractive indices from the experimental data are at 550 nm band to 632.8nm band and 1,550 nm infrared band, where the refractive index of graphene are 2.42 + 1.49i at 632.8 nm and 3.65 + 2.42i at 1,550 nm (Figures 1-3). 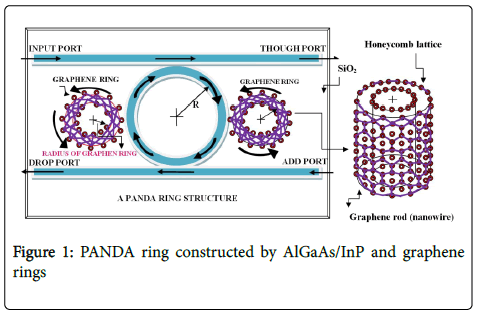 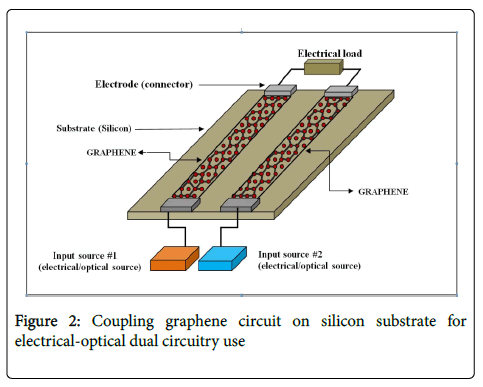 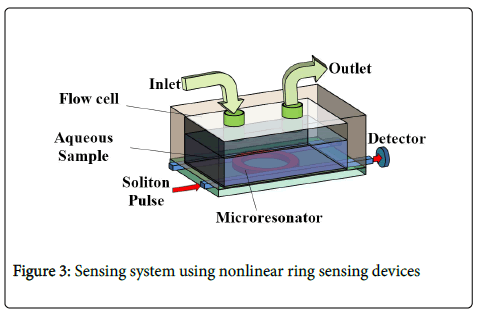 Recently, Yupapin et al. [7,8] have reported the interesting device known as a PANDA ring circuit, which is a nonlinear material device. It was made of an AlGaAsP/InP material. It was designed and manipulated to be a very small device and useful for many applications [9-16]. In this article, it is introduced that such a material and device can be replaced by the new interesting device called “grapheme”, which has dual properties i.e. mobility and Polarisibility, which can be useful for many applications, especially, for small scale device application, i.e. biosensors and bioelectronics. Moreover, the use of trapped electrons can be used as an electronic transporter circuit, in which the electrical current (or magnetic) can be involved in the investigations, where the various applications for such as nanoelectronics, nano-communications and nanomaterials can be formed by the dual behaviors: electrical and optical properties. Figures 1 and 2 show the use of graphene material with ring resonator and micro-rod devices that can be configured to be a small ccaledecive and as a dual property system, which can be used for broader research and investigation. One of the applications is as shown in Figure 3, where in this case the optical or electronic sensors can be configured by using the input soliton as an optical source; however, the common commercial laser is also possible.