Halalopathic: A New Concept in Medicine

Halalopathic, the proposed concept, is based on the compatibility between therapy and individual’s belief where the “power of word, tranquility and therapeutic agents” work cooperatively to induce more effective treatment. The healing approach may well affect non-genetic changes that human genome experiences as a result of interaction with the environment. To realize the concept, ingredients and processes need to be evaluated with regards to Halal standard. Halala-Tayyiba label on medicine will reveal to the patient that drug has been prepared under maximum hygiene, minimum contamination and the whole process is clean, pure and comply with Islamic principle. Halalopathic generate compatible system which will reflect on the chemistry of our bodies where disorder is decreased, and ultimately lower the entropy and increase the overall potential energy. The concept promotes personalized therapy and open new window for more effective treatment.

By nature, human is healthy and keeping a good health is vital and a basic need for human existence. Health value has been expressed and addressed in different cultures by different notions, but generally agreed that health is a crown on the head of a healthy person that only patients can see. Many medical models have been designed to improve therapeutic window and produce more effective treatment [1,2]. Personalized treatment is a new option where many researchers are actively involved in creating the right treatment for the right individuals at the right time. To improve therapeutic options, enrich personalized therapy, and provide adequate resources for fighting diseases, new concepts need to be postulated and implemented. Conceptually, people can reduce their risk of developing diseases, receive more effective treatment, and reduce their health care cost when personalized treatment, biological changes, behavioural factors and social conditions are taken into consideration [3]. Any interventions that help individuals to cope better with comfortable feelings, stress, negative effect, and trauma, may offer complementary and alternative strategies in medical treatment. The practice of yoga, which has been generally linked to reductions in stress, anxiety, and increased selfefficacy, was shown to help reduce the negative symptoms that often accompany smoking cessation and predict relapse among recent quitters [4]. Mindfulness training also provides an alternative and targeted treatment for stress related symptoms. It is involved in the elimination of distortions and distractions and can have effects on one's mental habit, and depressive symptoms [5].

Halalopathic medicine may constitute a new trend of comfort medicine that may lead to more effective treatment. The concept is based on the idea of establishing a compatible relationship between therapy and individual’s belief [6,7]. Compatibility concept has been proven to be useful in many aspects; administration of more than one drug [8], organs transplantation, recipient and donor [9], blood group matching [10], and most important the compatibility of cure and illness. The compatibility of therapy and belief is debatable [11], but in this study, we would like to give deep thought and rationality about the useful link between therapy and individual’s belief, and utilize the healing power of word, and tranquility in association with therapeutic drugs for more effective treatment.

Halalopathic represents any medicine derived from conventional or non-conventional therapies that combine the value of religion with the benefits of modern science, utilize the holistic approach and focus on the healing power of word and tranquility. Halalopathic medicine is based on the principle of Halala-Tayyiba [12], clean from any potential non-halal ingredients, Tayyib processes and comply with Sharia. Compatibility between therapy and human’s belief generate more integrated and stable system, create a state of existing together in tolerant, thus improve the body’s defence system to tolerates the presence of foreign material, like drug, without immune reaction [13].

The implementation of Halala-Tayyiba concept required to monitor the process and evaluate all ingredients involved in the production process. Halala Tayyiba label on medicine will remind patient with Allah, the healer, and will intensify trust between patient, medicine, pharmaceutical companies and physicians. Patient feels that there is a cure for his illness, heart will be filled with hope, rather than despair, the soul and the psyche will be strengthened [14], tranquility is intensified, thus favourable circumstances will be created and more effective treatment is likely to be (Figure 1). Comfort medicine, that is selected and influenced by what we believe, is not restricted to Muslim, in general taking medications that might contain religiously forbidden ingredients (Buddhism, Christianity, Islam, Hinduism and Judaism) predisposes patients to nonadherence, increases the risk of relapse of symptoms, which could lead to longer hospitalization or death [15]. 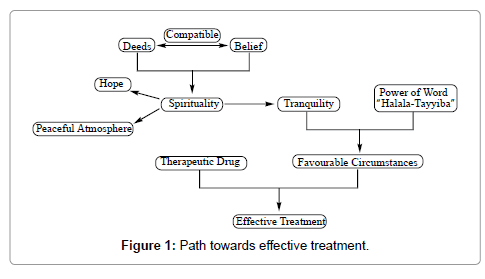 Previously choosing medicines comply with Sharia was not possible, mainly due to the lack of choices, but with increasing choices of non-animal-based pharmaceutical ingredients on the market, it became possible to design drugs which can easily comply with Sharia. The demand for non-animal ingredients is increasing, supported by vegetarian/vegan/halal consumers [16,17]. There are many rationalisations why pharmaceutical manufacturers are recommended to certify their products as halal [18]. The product has first to comply with toxicity, quality, and efficacy requirements before it can be halal certified [19]. In the halal market, Muslim and non-Muslims alike, have to deal with halal products as sustainable and beneficial that do not compromise fundamental drug standards [20]. Halalopathic, to our knowledge, will represent a new medical model that could enhance belief and expectations in the efficacy of the therapeutic drug, and provide more effective treatment, if favourable circumstances are effectively utilized and combined with appropriate therapeutic drug. The healing power of each components will contribute to the totality of the healing process and enhance the total drug effect. Halalopathic is a complementary medicine used in addition to conventional medicine and target Muslim patients. The concept needs more exploration to determine their potential and to be translated into clinical practice, but new standards need to be established to ensure that every step-in drug preparation adheres fully to Halal and Tayyib requirements, including the source of all ingredients, efficacy requirements, the processes involved in the production, packaging, until the product reaches the consumer.

Many studies have demonstrated that people inherit more than just genes from their parents, epigenetics provide a new concept to study any process that alters gene activity without changing the DNA sequence, such as cytosine methylation of DNA and histone acetylation as well as micro RNAs (miRNAs) and noncoding RNAs [21]. In other words, epigenetics is the study of gene expression and how external factors can turn genes on and off. It’s thought that we have many of non-genetic changes that are triggered by lifestyle and environmental factors [22], but a great deal of debate about whether these changes can be passed along to future generations. It has been proven in many studies that genes are responsible for cell cycle regulation, DNA repair, angiogenesis, and apoptosis are suppressed and inactivated by epigenetic modification in the form of hypermethylation of their specific own CpG islands [23]. Thus, there are many good reasons to believe that non-genetic variability can be recognized as an important factor in the development and treatment of human disease [24].

If a gene is turned off epigenetically, the response of genes will be inhibited, thus researches related to epigenetics have begun to set up a new concept for curing disease based on epigenetic manipulation, where desirable genes are reactivated, and undesirable ones are deactivated. Advances in our understanding of epigenetics dovetail with mind-body medicine and spiritual principles, of which emotional freedom technique is one [25], work with body’s electromagnetic system and produce more effective healing. Epigenetics can be used to explain placebo effect and spontaneous healing by altering the signals of energy meridians in response to thoughts and feeling [26]. Thus, the key to healing lies in controlling belief and emotions that may trigger the expression of specific DNA ultimately control the healing process.

Dawson church, in his book the genie in your genes [27], has provided an exciting pointer to the future possibilities of epigenetic medicine. Dawson suggests a direct connection immediate changes in the body on a deep cellular level. Over one hundred genes in the body are activated by our thoughts, feelings and experiences, and influence our immune system and hormones production through chosen thoughts, beliefs, emotional responses and experiences.

There are numerous diseases thought to have an epigenetic component including asthma, Alzheimer’s, cancer, diabetes, immune disorders, kidney disease, glaucoma, muscular dystrophy, and pediatric syndromes as well as many psychiatric disorders including autism, schizophrenia, and bipolar disorder [28,29], however, more research is needed to explore the role of epigenetic in human health [30].

To improve treatment, utilizing Halalopathic concept, a connection needs to be found between our beliefs and therapeutic agents, and generate a compatible system which will reflect on the chemistry of our bodies where the disorder is decreased, and ultimately lower the entropy and increase the overall potential energy [31]. The positive energy, derived from positive thinking [32], will be translated into work, adjust body’s biology to fit with non-genetic changes, increase the strength of immune system and improve the efficiency of DNA repair, and other biological processes involved in fighting disease. Clinical trials need to be conducted to address the viability of the concept.

Compatibility concept is based on finding a connection between human’s belief and therapeutic drug where certain genes will be turned off epigenetically. Halalopathic medicine constitutes a new therapeutic concept where human, moral and spiritual values are utilized along with a therapeutic agent to offer right treatment for the right patient. Medicine labeled with Halala Tayyiba will be selected eagerly by Muslim patients. The word “Halala Tayyiba” will convey to the patient that the drug has been prepared under maximum hygiene, minimum contamination and whole process is clean, pure and comply with Islamic principles. This knowledge will create comfortable feeling and facilitate the development of the favorable circumstances, activate placebo effect and achieve more effective treatment. Thus, new standard needs to be established to ensure that every step-in drug production is re-evaluated and optimized to produce drugs compatible with patient’s belief and pave the way toward more personalized therapy.

We would like to thank Mr. Farhan Tufail and Khaled Abou Hadeed for useful discussion and their support.

Copyright: © 2018 Alzeer J. This is an open-access article distributed under the terms of the Creative Commons Attribution License, which permits unrestricted use, distribution, and reproduction in any medium, provided the original author and source are credited