Dystonic tremor is defined as tremor in a body part affected by dystonia, this involves: tremor in an extremity or body part that is affected by dystonia, focal tremors, usually with irregular amplitudes and variable frequency (mainly less than 7 Hz), and mainly postural or kinetic tremors, usually not seen during complete rest. Hemi body movement disorder are often considered to be non-primary movement disorder and usually attributed to secondary causes, including environmental, vascular, neoplastic, and infectious. We report 14-year-old male patient presented with progressive left hemi body dystonic tremor which started from left upper limb and progress to left lower limb over a period of three years. He had associated global type of headache which worsens during morning period. No family history of same illness, normal prenatal history, no birth trauma. Physical examination revealed dystonia of left upper limb and lower limb (upper limb>lower limb) mixed with rhythmic tremulous movement of mainly left upper limb. Fundus examination revealed pappiledema bilaterally. Normal liver function test, normal abdominal ultrasound and negative HIV serology. No MRI was performed due to financial reason, but brain CT-scan showed calcified; mildly contrast enhanced Intraventricular mass extending from foramen magnum to lateral ventricle, displacing the septum pallidum to right side and bilaterally dilated lateral ventricle, with possible pressure effect on right basal ganglia. Following brain imaging diagnosis of left hemi dystonic tremor secondary to Intraventricular mass was made and patient was started on low dose clonazepam for symptomatic relief and given appointment for neurosurgical evaluation. Even though secondary/symptomatic causes of movement disorder is uncommon, it’s important to think of secondary causes in patient whom present with hemi body movement disorder, like our patient, as some of the underlying causes could be easily treatable and the symptoms could be relieved if managed early.

Dystonic tremor is defined as tremor in a body part affected by dystonia, this involves: tremor in an extremity or body part that is affected by dystonia, focal tremors, usually with irregular amplitudes and variable frequency (5-11 Hz), and mainly postural or kinetic tremors, usually not seen during complete rest [1,2]. It has many different manifestations and causes, and many different treatment options are available. Acquired brain disorders such as traumatic brain injury which may affect the sub cortical structures may causes different movement disorder. Cerebral palsy is another common cause of movement disorder in children especially dystonia and athetosis are common and children often manifest early in the life. Infectious Causes like infection which is endemic in sub Saharan countries, may affect sub cortical structures and result in movement disorder, especially basal ganglia is susceptible to infectious agents [3,4]. In countries like Ethiopia where streptococcal infection is prevalent, movement disorder like Sydenham chorea is common, which is mainly autoimmune disorder where there is antigenic mimicker between streptococcal antigenic protein and basal ganglia cells antigen. Any patient presenting with an acute movement disorder requires neuroimaging, And MRI is the optimal modality. Movement disorders that affect one side of the body, referred to as hemidystonia or hemichorea, can be caused by acute vascular events, such as stroke or vasculitis, and MRI with diffusion-weighted imaging is part of the diagnostic pathway, Moyamoya disease and other vasculopathies may Present with chorea, and surgical intervention can improve the movement disorder and reduce the risk of ongoing stroke [5]. Tumors or other space-occupying lesions involving the sub cortical structures may present with Acute or sub-acute onset of movement Disorders and imaging is diagnostic [4]. Treatment options include physical and occupational therapy, the primary approach to the child with an acquired movement disorder is defining the etiology and then treating the underlying cause. Defining and treating the cause of disease in a timely fashion provides the best chance of a good outcome and reduces the Potential destructive nature of disease. Symptomatic treatment of acquired. Movement disorders is generally unsatisfactory [3,4]. Other treatment option includes, oral medications, intramuscular injection of botulinum toxins, and neurosurgical interventions [3].

14-years-old, right handed male patient presented to Tikur Anbessa specialized hospital (TASH), neurology referral clinic complaining of progressive abnormal, involuntary movement of left hemi body of 3 years duration. The abnormal involuntary movement initially started from left upper limb and progressively involves the ipsilateral lower limb; the movement decreased during sleep time and worsens when the patient is anxious. The movement is mainly tremulous movement of both left upper and lower limb with intermittent twisted posturing; he has difficulty of walking due to dystonia of lower limb. He also drops out of school due to his movement disorder, but never seeks medical help till recently. In addition, the patient complaining of blurred vision and global headache worsening during morning. His medical and developmental histories were unremarkable. He had never taken any neuroleptic or dopaminergic drugs, and there was no family history of same illness. No history of weight loss or reduced appetite, no history of prior throat infection. No history of seizure disorder.

Upon examination, all vital signs are in normal range. No Kayser- Fleisher ring. Normal cognition, including language. Normal cranial nerve study. Fundus examination revealed blurred disk margins bilaterally, no hemorrhage. There is abnormal tremulous movement of left upper and lower with intermittent Dystonic posturing with twisting mainly involving upper limb gait is characterized by exaggerated knee flexion, plantar flexion, and foot inversion. Otherwise, power, tone, reflexes are normal in all four limbs, except mild coordination problem on left upper and lower extremity due to abnormal posturing. Routine investigations, revealed normal hematological and biochemical study, and negative serology for HIV and syphilis. No genetic screening was done. Due to lack of availability the serum ceruloplasmin and copper levels were not determined. Due to financial constrain brain MRI was not determined, but brain CT-scan revealed, calcified; mildly contrast enhanced, 4.7 cm × 7.4 cm in size, Intraventricular mass extending from foramen magnum to lateral ventricle, displacing the septum pallidum to right side. Bilaterally dilated lateral ventricle with possible pressure effect on right side basal ganglia (Figures 1 and 2). Radiological diagnosis was suggested to be Central neurocytoma by neuroradiologist, since neurosurgical service is poor in Ethiopia, final outcome of the patient was not known, so tissue diagnosis is not available. 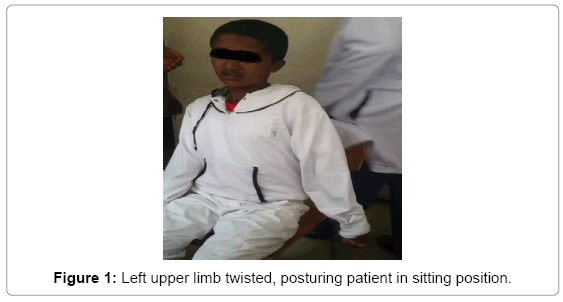 Our patient symptom was progressive and developed over three years and since the child is from the rural part of Ethiopia the patient family didn’t present him for medical evaluation till his symptoms worsen and he became un able to attend his school. Among differential diagnosis for symptomatic movement disorder, cerebral palsy is the commonest, but our patient had no history of prenatal illness or birth trauma, he had uneventful birth, and had been well till three years back when he started to develop these symptoms, which makes cerebral palsy unlikely secondary cause for our patient. Negative serology test for HIV makes infectious causes less likely as the symptomatic cause for our patient. Other common post infectious movement disorder in developing country is Sydenham chorea, which is predominantly chorea than dystonia, as our patient predominant clinical feature is dystonia, this cause is less likely. In addition, the patient had no prior history of throat infection. Other secondary causes of movement disorders are drug induced and toxins. But our patient had no history of exposure to neuroleptic and other toxins, so this is less likely to be the cause our patient movement disorder. The progressive development of our patient symptoms and the brain imaging evidence of large, likely benign Intraventricular mass which likely arise from septum pallidum and out grow into lateral ventricle and further grew down ward involving all the ventricular system, as a result there is associated obstructive hydrocephalus. So, the pressure effect on the right side basal ganglia could be from the mass or the enlarged lateral ventricle particularly frontal horn, which is proximal to deep nuclei, which explain the left hemi body patient symptom. The possible differential diagnoses for primary Intraventricular mass are vast and difficult to differentiate clinically and radiological from central neurocytoma. The differential includes. 1. Oligodendroglioma, it’s a glioma that originate from the oligodendrocytes with average age at diagnosis is 35 years and commonly arise from frontal and temporal lobe, rarely arise from ventricles and often presents as headaches, seizures, cognitive dysfunction [6]. 2. Sub Epyndemal Gaint cell astrocytoma (SEGA), Benign, slow-growing tumor of mixed glioneuronal lineage that usually arises in the periventricular area. It’s a childhood disease, mostly seen near the foramen monro and attached to the ependymal surface under head of caudate nucleus.3. Choroid Plexus Pappiloma. It accounts 85% of choroid plexus tumor. It’s WHO-1 tumor, accounts 0.5% of CNS tumor, 50% arise from lateral ventricle, 40% from 4th ventricle. It has irregular surface involving atria of the lateral ventricle. It is commonly seen in children less than 10 years old. It has tendency to invade outer margin of the ventricle causing vasogenic edema with significant contrast enhancement. Ependymoma and meningioma are the other possible differential for Intraventricular mass. Central neurocytoma is a rare tumor, which originates from neuronal cells of the septum pullicidum and the subependymal cells of the lateral ventricles, especially frontal horn. The majority of central neurocytoma grow inwards into the ventricular system. Affect young individuals between 20-40 years of age. Both sex equally affected equally. Mainly present as acute or sub-acute course (median clinical course 6-7 months) mainly present with features of raised intracranial pressure due hydrocephalus [6,7]. Finally, symptomatic movement disorder due to Intraventricular mass was considered and patient was started on low dose clonazepam for symptomatic relief [8-12].

The authors, would like to acknowledge Head of Department of Neurology, Addis Ababa University, Dr. Seid Ali, for his continuous support and facilitation of approval of this manuscript by department ethical committee. We are also grateful to family of the patient for their willingness and cooperation on giving consent for publication

Copyright: © 2017 Ayele BA, et al. This is an open-access article distributed under the terms of the Creative Commons Attribution License, which permits unrestricted use, distribution, and reproduction in any medium, provided the original author and source are credited.