High Frequency of Fractures in an Early Stage of MS

Copyright: © 2014 Krokki O, et al. This is an open-access article distributed under the terms of the Creative Commons Attribution License, which permits unrestricted use, distribution, and reproduction in any medium, provided the original author and source are credited.

Objective : Low-energy (fragility) fractures of the distal forearm, femur, and vertebrae are usually associated with osteoporosis. There is an increased risk of fractures and low bone mineral density in patients with MS, even during the early stages of the disease. We evaluated the prevalence and features of low-energy fractures in a population–based MS cohort residing in a region of Finland near the Arctic.

Methods: The prevalence of fractures was determined in 491 patients who had been newly diagnosed with clinically definite MS. The fracture type, as well as the association between the duration of MS and the expanded disability status scale (EDSS) score, with a fracture event was determined.

Results: The prevalence of fragility fractures was 7.1%. The most frequent fracture types were vertebral (19.2%), distal forearm (19.2%), and ankle (25%), and the majority were low-energy fractures. The majority of fractures occurred within five years of MS diagnosis verification in non-disabled to moderately disabled patients (EDSS score 0–4). The mean MS patient age at which low-energy fracture events occurred was 42.5 years (95% CI, 38.3–46.6 years). Osteoporosis had only been clinically investigated in 26% of patients with fragility fractures, 89% of whom returned a positive finding.

Conclusions: The prevalence of low-energy vertebrae fractures was notably high in the present cohort; however, the presence of osteoporosis was poorly evaluated in clinical practice for this cohort.

In the developed world, 30% of women and 20% of men over the age of 50 years will sustain an osteoporosis-related fracture [1]. Low-trauma or fragility fractures occur most commonly in the spine, proximal femur, or distal forearm, although they can also occur in the arm, pelvis, ribs, and other bones [2]. A history of a fragility fracture or fractures is predictive of future fractures [3]. Fragility fractures are associated with significant pain, suffering, disability and considerable costs to society [4].

Osteoporosis is defined as a generalised skeletal decrease in bone mineral density (BMD) and is an independent predictor of fragility fractures [4]. In patients with MS, reduced BMD [5], as well as an increased risk of falling [6], may increase the risk of fragility fractures, even in patients younger than 50 years old. Furthermore, the low vitamin D levels associated with MS may contribute to bone fragility; however, the evidence supporting this is inconclusive [5,7,8]. Population-based cohort studies from three European countries have revealed a higher risk of proximal femur fractures in patients with MS than in the general population. The overall risk of fractures is almost equivalent between MS and control subjects; however, the risk of clinical osteoporotic fractures tends to increase with increasing levels of disability [9-11]. Furthermore, a study from Norway shows that a high proportion of MS patients have osteoporosis or osteopenia when the disease is diagnosed, and this is even true of patients with clinically isolated syndrome [12]. The primary aim of this study was to evaluate the prevalence of low-energy fractures in an MS cohort residing in a region of Finland near to the Arctic. A secondary aim was to evaluate the expanded disability status scale (EDSS) level [13] and duration of MS at the time of a fragility fracture event.

The study was performed in the Outpatient Department of Neurology at Oulu University Hospital (OUH) with the approval of the Northern Ostrobothnia Ethics Committee and was designed according to the principles of the Declaration of Helsinki. Northern Ostrobothnia is a high-risk area for MS; it is situated in northern Finland, near to the Arctic Circle. The source population on the 31 December 2010 was 398,335, amounting to 7.4% of the total population of Finland. The female/male ratio was 0.99. Study data was obtained from hospital records, which contain broad information about patients with MS follow-up in OUH. Patients were included if they had been definitively diagnosed with MS between 1 January 1990 and 31 December 2010. All cases were identified from the hospital records by reference to code 3400A (MS) in ICD-9 (1 January 1992 to 31 December 1995) and code G35 (MS) in ICD-10 (1 January 1996 to 31 December 2010).

All fracture types were identified from patients’ hospital records. Patients who had sustained fractures before the age of 15 years or a cranial fracture at any age were excluded from the study. All fracture events were classified as high- or low-energy (fragility) fractures using the definitions of Flinkkila et al. [14] and Morrison et al. [15]. A high-energy injury was defined as that occurring from a sports activity, a fall from a height of more than 1 m, a bicycle accident, a motor vehicle collision, or a major intrinsic event (e.g., a stroke, syncope, or epileptic seizure). Fractures that were not associated with these high-energy events were defined as low-energy fractures. A low-trauma fall was defined as a fall from standing height such as slipping, tripping, or stumbling on a flat surface or stairs. Non-fall fractures were also identified. A diagnosis of osteoporosis was confirmed from the hospital records and was based on the results of dual-energy X-ray absorptiometry (DXA) or an osteoporotic bone structure on X-rays. A subset of patients received a BMD examination for osteoporosis as part of their clinical treatment and investigations. A clinical osteoporotic fracture has been defined as a fracture of the radius, ulna, humerus, rib, femur, hip, pelvis, or vertebrae [16]. In the present study, clinical osteoporotic fractures were limited to those occurring in these anatomical locations for the purposes of comparison. None of the present cohort had rib or pelvic fractures. Fragility fractures of fingers, toes and ankle were excluded from calculations of clinical osteoporotic fractures.

All statistical analyses were performed using SPSS for Windows, (IBM Corp. Released 2011. IBM SPSS Statistics for Windows, version 20.0. Armonk, NY: IBM Corp). A P value of less than 0.05 was considered to be statistically significant. The baseline characteristics of MS patients with osteoporosis and fractures were compared using the Chi-square test. Scatter plot was used to analyse the association of disability and age at the time of a fracture event with the distribution of fractures according to fracture nature (low- vs. high-energy). To assess the association of steroid administration with the likelihood of a fracture, three subgroups were defined based on the administration profile of short courses of steroids during the follow-up: group 1, patients who did not receive steroids; group 2, patients who received fewer than five or five short courses of methylprednisolone; and group 3, patients who received more than five short courses of methylprednisolone. Kaplan-Meier analysis was used to estimate the proportion of MS patients who sustained fractures during the early stage of MS and was performed because of differences in the follow-up duration after MS diagnosis. 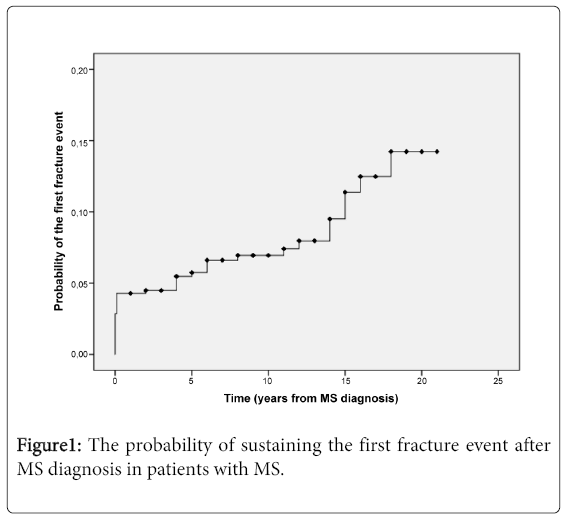 Figure 1: The probability of sustaining the first fracture event after MS diagnosis in patients with MS.

Table 1: Characteristics of fractures. *Cranial fractures and fracture age under 15 years are excluded. 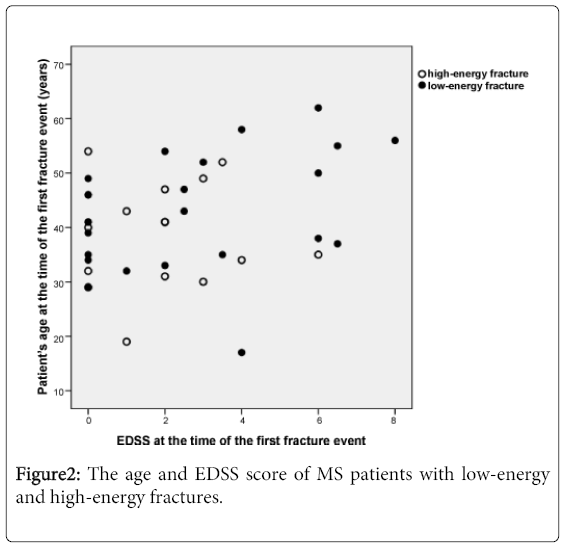 Figure 2: The age and EDSS score of MS patients with low-energy and high-energy fractures. 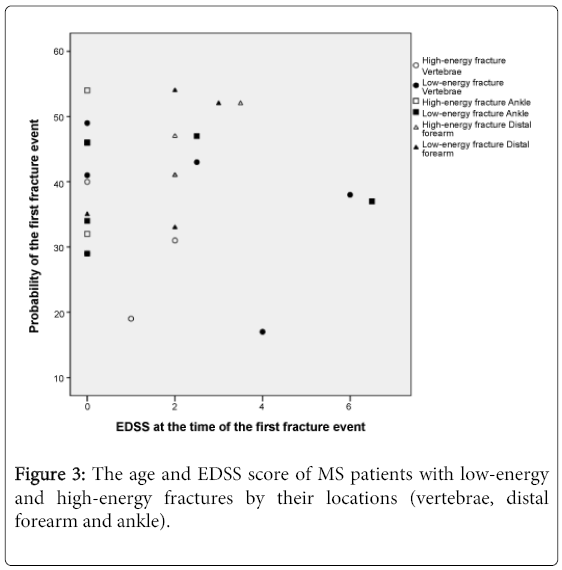 Figure 3: The age and EDSS score of MS patients with low-energy and high-energy fractures by their locations (vertebrae, distal forearm and ankle).

Patients who sustained low-energy fractures were not routinely investigated for osteoporosis. A DXA scan was only performed in 26% (9/35) of fragility fracture cases, and the vast majority (89%, n=8) of these patients were suffering from osteoporosis. An osteoporotic bone structure was specified in the X-ray findings of one case. The majority of cases with fractures (n=40/52) did not undergo any specific examination for osteoporosis. However, there was no mention of an osteoporotic bone structure in the X-ray findings of these cases.

According to Kaplan-Meiercurves, MS patients seem to be at a higher risk of fractures at the first years from verified MS diagnosis and also 10 years after MS diagnosis probability of the first fracture event starts to grow up.

We also found that fractures occurred more commonly at a young age in MS patients that were not disabled or mildly/moderately disabled and only occasionally occurred in the advanced phase of the disease. Although the size of our cohort was limited, the study data included information on the duration, course, and level of disability associated with MS disease during the 21-year follow-up period and information on the time interval between fracture event and verified MS diagnosis. This enabled an evaluation of associations between patient age and disability level at the time of a fracture event as well as the nature of each fracture event (low-vs. high-energy). Reduced physical activity owing to high disability rates, fatigue, chronic inflammatory processes, vitamin D deficiency, and glucocorticoid use may increase the risk of osteoporosis and fractures in patients with MS [7]. Poor mobility and a high EDSS score level do not explain the high frequency of fragility fractures in the present study. Low BMD is prevalent in newly diagnosed MS patients with no or minor physical disability [12]. Patients from Finland already have low vitamin D levels owing to a deficit of solar radiation and a low vitamin D intake [22,23]. Mean vitamin D levels in the general Danish population have been reported to be sufficient [24].The low level of vitamin D in Finnish population could increase the risk of osteoporosis and may partly explain the higher number of vertebrae fractures in our MS cohort compared to Danish database.

This work was supported financially by clinical EVO grants from Oulu University Hospital.