How a Single Cell Sense its Mechanical Environment?

Copyright: © 2016 Lin S, et al. This is an open-access article distributed under the terms of the Creative Commons Attribution License, which permits unrestricted use, distribution, and reproduction in any medium, provided the original author and source are credited.

The extracellular matrix (ECM) is essential for regulating cell behavior and tissue function [1]. Local ECM structure and mechanics are increasingly recognized as important mechanical effectors of cell responses and tissue regeneration [2]. This is illustrated by the fact that either the rigidity of ECM [3] or local tension regulate cellular mechanotransduction pathways, and their dysregulation results in many different types of diseases [4,5]. It was speculated that cell contractions, generated by the cross-bridging interaction of actin and myosin II motors, maintain a tensional homeostasis in response to mechanical disturbance. The question is what is exactly the tensional homeostasis, if any?

The first detailed characterization of a tensional homeostasis in cells was conducted by Brown et al. [6]. They observed an equilibrium force in the collagen gel containing living dermal fibroblast cells following different mechanical disturbance. This equilibrium force, which is typically around 40-60 dynes/million cells, was considered as the tensional homeostasis. Utilizing scanning probe microscopy, Mizutani et al. found out that the stiffness of fibroblast changed rapidly in response to external loadings; however the long term stiffness of cells does not change [7]. A newer technique, traction force microscopy (TFM) allows researchers to better visualize single cell induced mechanical forces on the substrate [8]. In general, cells are seeded on substrate with embedded microbeads. The cell contraction caused movement of microbeads, i.e., displacement field, are tracked and converted to traction stress field, which is an indirect measure of the cellular contraction forces. The regulation of force transmission has attracted a lot of efforts using TFM.

A microcontact printing technique, specifically micropost arrays, was developed to address this decoupling issue. Han et al. observed that traction forces were more sensitive to focal adhesions [16]. However, this contradicts with the work by Califano et al. [9]. They found that the focal adhesion density was not a significant predictor of traction force. Further investigation and analysis are needed to interpolate these contradictory observations from various experimental protocols.

Virtual testing using numerical or theoretical model has been an efficient tool for integrating various experimental data to understand the cell-ECM interactions and its resulted traction forces. Zielinski et al. has simulated the two dimensional and three dimensional cell-ECM interactions to quantify the sensitivity of traction force to biomechanical parameters, such as cell stiffness, focal adhesion density, cell aspect ratio and contractility [17]. The cell stiffness and focal adhesion density were identified as two major parameters affecting the traction forces. Oakes et al. has proposed a physical model for adherent cells considering uniform contractility combined with a uniform boundary line tension [18]. They found out that the cell shape regulated the traction force distributions in order to maintain a constant strain energy density of each cell. Our group also developed a numerical model to capture the cell-ECM interactions for identifying the tensional homeostasis of cells. The peak displacements of micro beads were observed in locations with large curvatures as shown in Figure 1. We have shown that cells altered their shapes and stiffness to exert various level of traction forces in response to different substrate stiffness. However, the cellular strain as well as its strain energy density was kept constant regardless of changes in substrate stiffness, cell shape and cell stiffness. This indicated that cellular strain could serve as tensional homeostasis of cells cultured on different mechanical environment. Our results suggested that measurement of contractility might be useful for monitoring cell mechanosensing as well as dynamic remodeling of ECM. 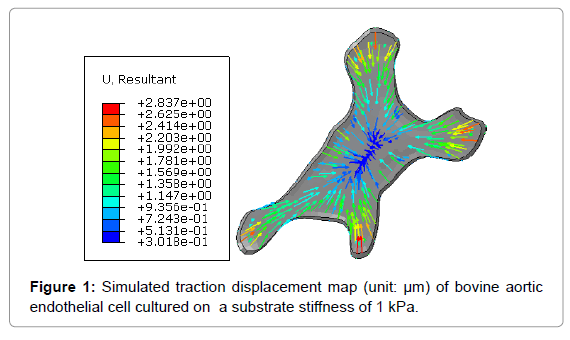 In summary, various devices and techniques were developed to inspect the mechanism by which cells sense the mechanical environment. They will continue to play essential roles in understanding many biological processes, such as cancer cell migration, morphogenesis, and differentiation.