Background: To evaluate the differences in radiation dose and contrast volume between the femoral approach (FA) and the left (LRA) and right (RRA) radial accesses separately during coronary angiography (CA). Background: CA is crucial in the diagnosis of coronary artery disease (CAD). Two access sites are usually used for angiography - femoral and radial.

Methods: We retrospectively analyzed 8978 patients who underwent coronary angiography in our hospital between January 1, 2014 and December 31, 2016. Patients with prior coronary artery bypass grafting were excluded from the analysis.

Conclusion: RRA was associated with a significantly reduced amount of contrast agent and radiation dose. Our results indicate RRA and LRA access groups should not be considered interchangeable. RAA is responsible for the advantage of both radial accesses, in relation to the classic femoral access.

Left heart catheterization is performed for both diagnostic and treatment purposes. Despite the procedure being minimally invasive, there still exists the possibility of complications [1]. An advantage of the common femoral access technique (FA) is that it enables a more rapid access to the target site. Moreover, the diameter of the vessel, as well as the shape and profile of the catheters primarily designed for FA procedures enable their easy placement. The radial access technique (RA) requires more time for many operators to become proficient [2]. The most common problem associated with the RA technique is radial artery spasm [3]. Despite the use of various preventative methods, it is sometimes necessary to abort the procedure and switch to contralateral RA or FA, which lengthens the procedure and may also increase the overall amount of contrast agent and radiation dose used. The profile and shape of catheters primarily designed for FA facilitate an easier procedure and would consequently decrease the amount of contrast agent and radiation dose.

A considerable reduction in RA-related hemorrhagic complications has been demonstrated with the increased procedure duration, radiation dose and amount of contrast agent used [4]. Its advantage is that it has a reduced risk of major hemorrhagic complications when compared to the FA procedure [5]. The choice of access type can have a major influence on the length of hospitalization, treatment costs, and mortality [4,6,7]. Post-procedural patient comfort is also not without significance. On the other hand, RA procedures often fail, requiring conversion to FA. Despite the many advantages, a number of questions remain. It is unclear if the longer RA procedure time, and the more frequent difficulties with the passage of catheters, may be associated with increased radiation dose and amount of contrast agent used.

Our study aimed to investigate the differences between various types of vascular access such as femoral, right radial, and left radial during diagnostic coronary catheterization.

Our retrospective analysis included successive patients who had undergone diagnostic coronary catheterization and/or post-CABG angiography using one of the three types of vascular access femoral access (FA), right radial access (RRA), and left radial access (LRA) between Jan. 1, 2016 and Dec. 31, 2016. Before the study started, the project was submitted for approval to the Ethical Committee and received a positive opinion. Due to the retrospective nature of the study, no informed consent was obtained from patients.

The most common valvular disease subjected to coronary diagnostics was aortic stenosis. Most procedures (approximately 80%) used 6F vascular catheters; the remaining procedures used 5F, with no significant differences between access type. The choice of vascular access type depended mostly on the operator ’ s preferences. The calculated radiation dose (in mGy) used during the procedure was taken from the angiography lamp indications. The volume of contrast agent used was measured in milliliters and was obtained from the procedure records. Patients’ age was obtained from each patient’s individual identification number (PESEL) and body mass was obtained from anthropometric data found in the documentation.

Because the variable distribution differed from the normal distribution, non-parametric ANOVA Rang Kruskal-Wallis tests were used for the statistical analysis. The same tests were used in post-hoc examinations to confirm which group was responsible for the differences. Patient’s mass, age, amount of contrast and radiation dose used, and the non-normal distribution were expressed as mean values, with p<0.05 being deemed statistically significant.

The study group consisted of 8978 patients; however, because of incomplete data or simultaneous post-CABG angiography, 7302 patients were included in the statistical analysis. The majority (69.5%) were patients who had undergone invasive coronary diagnostics in the course of stable coronary artery disease (SCAD). Other indications included acute coronary syndromes (ACS) and the presence of valvular disease before planned surgical procedures (Table 1). The mean age of patients was 66.4 years (SD 10.9); the mean body mass, regardless of sex, was 79.4 kg (SD 15.3). During the diagnostic procedure, the mean volume of contrast agent used was 112 ml (SD 51.7); the mean radiation dose was 377.2 mGy (SD 292.6). A detailed analysis was made on each vascular access site. A total of 3007 patients (41.2%) had either left or right femoral access. The RRA group included 2591 patients (35.5%), and the LRA group included 1704 patients (23.4%). A significantly higher percentage of smokers (p=0.001) was observed in the FA group. It was also observed that this same group had a significantly higher percentage of patients with a prior history of cerebral stroke (p<0.001) and prior coronary angioplasty (p=0.013). Previous myocardial infarction was also more frequent in this group; however, this did not reach a level of statistical significance (p=0.338) (Table 2). 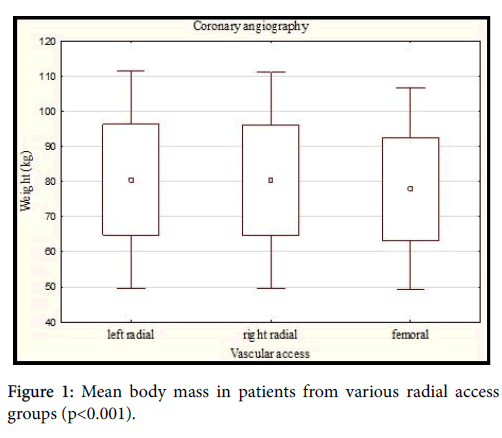 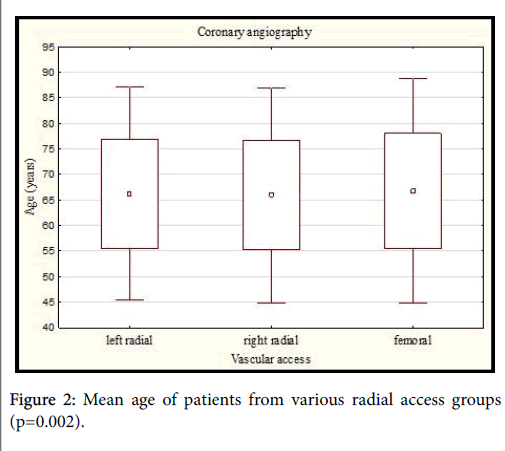 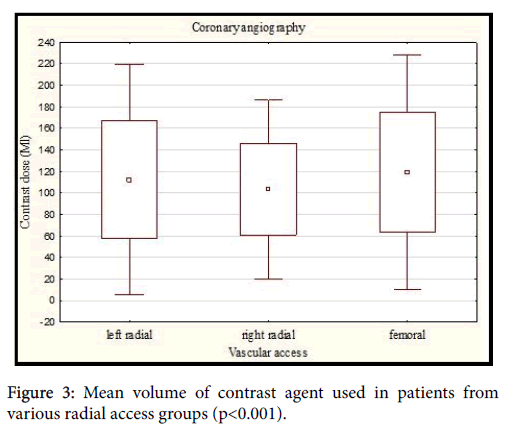 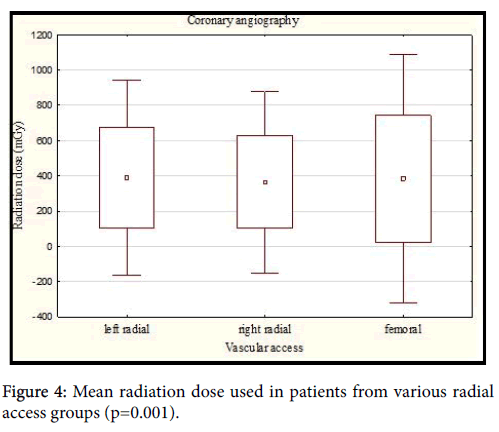 The femoral access vs both radial access groups was also comparatively analyzed. In the case of age, body mass, and volume of contrast agent used, statistically significant differences were observed (p<0.05). The mean patient age was higher in the FA group. The mean body mass was higher in both RA groups; however, the mean volume of contrast agent and radiation doses were lower in the RA group. No statistically significant difference was observed in the radiation dose (p=0.45).

The amount of contrast agent and radiation dose

There have been reports of more frequent hemorrhagic complications in patients undergoing FA (3.71%) and RA (0.58%) [6]. This could be related to different methods of obtaining hemostasis, as well as a patient’s age, sex, and body weight [13]. In the analyzed group, it was confirmed that patients who underwent FA were slightly older than those in the RA groups. The increased probability of lower extremity arteriosclerosis occurring in this group makes RA a better choice. On the other hand, older patients often have more arterial tortuosities, especially of the subclavian arteries. In this case, RA might actually complicate the procedure, extend its duration, and increase the radiation dose and volume of contrast agent used, which could lead to contrast-induced nephropathy [3,14,15]. The above factors most likely influenced the final choice of access type. A higher patient body mass meant that right (p<0.001) and left radial access (p<0.001) were used more frequently than femoral access. The choice of RA in this patient group, despite the increasing availability of vessel closing instruments, is related to a significantly easier way of obtaining hemostasis.

Our study has several limitations. First, it is a retrospective and onecenter study, involving operators/clinicians at various stages of their medical training. Some of the procedures initiated as radial access were, for various reasons, converted to femoral access (5.82%) or contralateral radial access (4.82%). The statistical analysis included a group of 8504 procedures and results are similar to previously published data (4.0-5.8%) [16,17]. Some of the patients (10.1%) underwent invasive coronary diagnostics for valvular disease, with the most common being aortic stenosis. Occasionally, an additional aortography was performed (the exact percentage is unknown) which may have affected the final radiation dose and volume of contrast agent used.

All the data used in the analysis is presented within the manuscript.

The authors received no financial support for the research, authorship, and/or publication of this article.

We would like to thank Editage (www.editage.com) for English language editing.

Copyright: © 2019 Zajdel W, et al. This is an open-access article distributed under the terms of the creative commons attribution license, which permits unrestricted use, distribution, and reproduction in any medium, provided the original author and source are credited.