How to Make India a Financially Literate Country Strategies

Copyright: ©2016 Chandra Mohan S. This is an open-access article distributed under the terms of the Creative Commons Attribution License, which permits unrestricted use, distribution, and reproduction in any medium, provided the original author and source are credited.

Visit for more related articles at Journal of Accounting & Marketing

The Globe is moving around the clock. The clock which is tagged with the fundamental aspects of the society is working tireless and trying to bring some sense.The one who is unable to sense the tireless meaning are acting in a stringent direction. Here, the logic to understand about the nature and nurturing attitudes of the people comes into picture. Many countries like India with the tagline of developing nation trying to empower but, the three aspects of society like three interim connections of the clock as hours, minutes and seconds-sadism, Leninism and terrorism respectively are paying convention towards the destination of brand deterioration. Here is the time to expel some of the routine habits of the regulators towards the upliftment of weaker sections turnd abysmal. The situation of security and survival become vulnerable some times when regulatory fails to rightly address the problems. Unless and until the people change their attitude, correcting society and nation will become question mark. Many of the severe incidents shared the signals of devastation. This attempt probably generates a kind of sense to feel about the nation.

India is the country with democratic constitution tag. It often communicates values to the world at a sphere of perseverance and perfectness. The concept unity in diversity adds some more glamour to the nation in terms of vast secular practice. The geographical sphere and history of the land deserves some unprecedented applause where it intentionally became host for many historians. The people who have really sacrificed their lives for the sake of mother lands sanctuary and secularism turned into as the footlayer of the land to cherish their tributes.But, the present situation is quite opposite to the past [1].

When India declared independent people thought the dream come true. But, in reality we went back to the decades of ancestors just to protect ourselves [2]. The very sad moments observed by the nation under the regime of feudalism, naxalism, terrorism, communalism and separatism sent the land to dearth conditions. Due to the individualism covered with greed and selfish nature rich people become richer where poor ones become poorer. The one more strategically diverted route of trust and justice by white collar bureaucrats with the cover of corruption and contingent politics reveals the negative shade of the past. In that list to share scams, corruption, bribery, money laundering, black money, corporate frauds etc… comes [3]. With some hope and confidence to start the future course of action the road map is as follows.

Here are the two reviews for the better connectivity and comprehension.

Role of Youth in Nation Building [4]

The youth of a nation shapes and moulds its present and paves the way for its future. The young generation shoulders a huge chunk of the responsibility of nation building; not the politicians or the policy makers alone. It would be more accurate to say that the youth working in tandem with the government decide the fate of a nation and its coming generations. It is, therefore, important that the voices of the youth get the right platform. It is necessary that the youth gets to exercise their freedom of speech, their opinion and their ideas.

So how can the youth help revolutionize the way an entire generation functions? In what ways can the youth bring about the much required change?

The foundation of an entire nation, its economy and consequently its future depends on how well the youth is educated. In terms of educational infrastructure, India has been witnessing a massive growth, but it is not enough. The constitution of India guarantees compulsory and free education to every child till the age of 14. But, it is hardly a reality owing to practical hurdles like economic inequality and rising population. The youth of India needs to be multifaceted with education remaining at the core of everything. Education empowers you with the ability to think, to tell the right from the wrong and good from the bad. In a country like India where “traditions and customs” is sometimes bigger than humanity itself; education is not an option, it is a necessity.

The young generation is no longer turning a blind eye to politics and government. More and more people from the younger generation are expressing interests in politics and how the country governed. According to Census [5], 229 million of the India’s entire population is the youth. It is, therefore, imperative that their say in who will run the country and who won’t will make more than just a small difference. If the 229 million and counting join hands and decide to free the country of corruption, it is not a task that cannot be achieved.

Social media has managed to give the “shy Indian youth” the power to speak their mind. Voicing ones opinion is no longer a luxury of the rich and the elite. Anyone and everyone can be heard. You do not need to have access to the best academic grooming to be able to come out and talk about what you feel about any pertinent issue. The youth is asking questions. The youth is coming out on the streets and protesting when they have to. The youth is joining hands in solidarity when that is the need of the hour. A platform this powerful needs to be utilized at its fullest and the onus lies on the youth of the country.

There are so many deep routed issues this country is plagued by. Just getting educated, involving yourself in politics and making the rightful use of social media is not going to eradicate every single problem in this country. This country needs to win over poverty, get access to proper health care and employment. The responsibility lies with the privileged to help uplift those that are not. Those who have the access to better opportunities should come forward and help those who don’t. History has time and again vouched for the fact the youth collectively can help achieve the impossible. They are passionate, motivated and strong willed. If the youth make their voices heard and resolve to make a change; there is no reason that India cannot be the greatest nation in the world in every sense of the term.

Youth represent the most dynamic segment of the population and are the future of the Nation. India is one of the youngest nations in the world. About 65% of India’s population is under 35 years of age. The focus of the Government is on youth-led development. The Youth should be “active drivers” and not merely the “passive recipients” of development.

The Government has introduced National Youth Policy, 2014 [6] with the VISION “To empower youth of the country to achieve their full potential, and through them enable India to find its rightful place in the community of nations\. The Department of Youth Affairs has been implementing various programmes with the objective of developing the personality and leadership qualities of the youth and inculcating qualities of good citizenship and volunteerism among the youth.

The main objective of the nation India to connect youth with the system to tap the gaps in the environment and to carry forward the vision depicts the intention of the people. It is obviously known fact that, rural development plays key role in order to get nations development. The prime factor here is to include the people who are with courage, commitment, caliber and confidence to work at rural areas. Here is a recommendation to work towards economic development of the nation;

The most commonly used word to denote the economic status of the nation like India by economists is as under developing. It might be a probabilistic and projected, but one should understand the number of HNIs living in India and their growth rate which is even higher than the world’s rate. The stories of lessons from the three major economies as indicators of growth like agriculture, production/manufacturing and service segments history gives us insights to get an idea about the glory days and the second side of the economy with some troubles and struggles. The situation emphasizes the need for neglected encouragement.

As per the existed system and statistics it is clearly known fact of mislead with more than 50 percentage and even more respect to the subject of segment. With the help of the above proposed system of bureaucracy, if we could able to reduce at least 30 percentage of the mislead from the areas like;

Subsidies -(Either by the state govt. or by the central govt.),

Sponsored schemes - (Either state govt. or Central govt. Sponsored) and 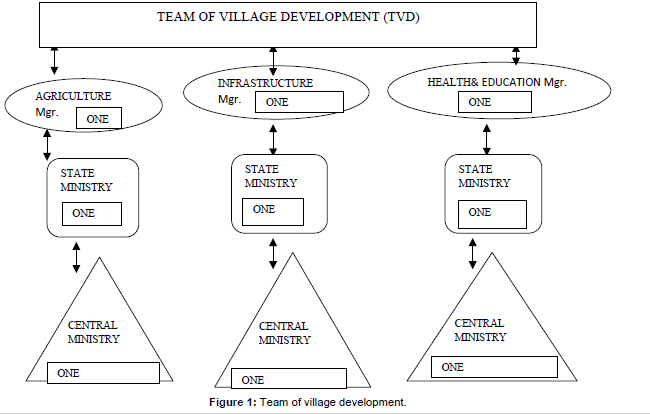 The main theme behind this idea to follow as follows;

Selecting three individual graduate or post graduates of the village

Assigning them responsibilities like, agriculture, infrastructure and health and education.

Having a kind of monitoring through state level authorities.

The final confirmation and approval will follow from the centre.

Decision making and power influence should lie in the hands of central team members.

The process of implementing some strategic plan definitely requires some extra energy and excellence along with support and sense. When it comes to the society, it always specially focuses on the side of negatives. If the result convinces them in a comprehensive manner automatically the attitude of the people takes u- turn. But it is not an easy job; it is a kind of challenge for the bearers. The time when it turns reality we don’t find any boundary for our happiness. Surely a transparent, genuine and open minded personality with flexibility and acclimatization can lead the force towards success. This particular reason suggested me to select youth as development drivers of the nation. It is our responsibility to mould, guide and support them.