Copyright: © 2014 Procino A. This is an open-access article distributed under the terms of the Creative Commons Attribution License, which permits unrestricted use, distribution, and reproduction in any medium, provided the original author and source are credited.

Class I homeobox genes are a family of transcription factors involved in human development, in the regulation of the cell memory program. Several HOX genes control the normal hematopoietic processes; recent evidence has demonstrated that deregulation of HOX genes plays a crucial role in the leukemogenesis and in many solid tumors mainly by means, the regulation of cell proliferation, cell death, metastasis and DNA repair.

The homeobox genes are a transcription factor family; they are divided in several classes. Class I homeobox genes (HOX in mice and HOX in humans), are 39 transcription factors, mainly involved in the regulation of embryonic development program; The HOX genes are characterized by a sequence of 183 nucleotides encoding a homeodomain of 61 amino acid that binds to DNA, as a biological gripper, activating or repressing specific genes [1,2].

Based on the sequence similarity and their position into the locus, the corresponding genes, of the four clusters, can be aligned with each other in 13 paralogous groups (Figure 1) [3]. HOX gene expression controls the identity of several regions along the body axis according to the rules of temporal and spatial co-linearity, with 3’ HOX genes (retinoic acid responsive) expressed early in development and controlling anterior regions, followed by progressively more 5’ genes (Fibroblast Growth Factor responsive) expressed later and controlling more posterior regions [4,5]. The HOX gene network, the most repeat-poor regions of the human genome [6], is also expressed in normal adult human organs [7]. Homeobox and HOX genes appear to regulate normal development, phenotype cell identity [8,9] cell differentiation [10,11] and control primary cellular processes, as proven by the description of congenital [12], somatic [13], metabolic [14] and neoplastic alterations [15,16] involving these genes. In addition to their role as transcriptional regulators, new crucial functions have recently been ascribed to HOX genes and homeoproteins mostly related to their interaction with miRNAs and ncRNAs to guarantee transcription and translation of specific RNA transcripts [17,18].

The HOX network is active in adult human tissues and organs, controls the spatial-temporal generation of biological structure expected during embryonic development and regulates the cell memory program [4]. 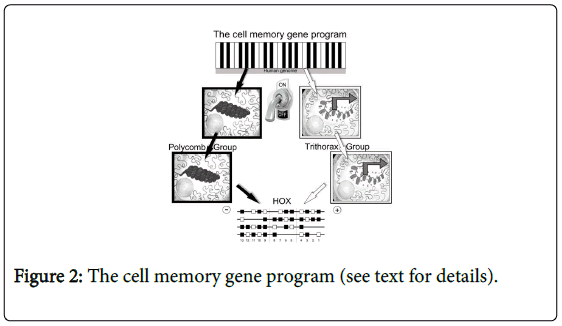 The cellular memory was regulated by three gene families: the Polycomb genes, able to block DNA-chromatin interaction leading to HOX gene silencing. The Trithorax genes, able to induce mRNA transcription through an open configuration of DNA-chromatin interaction and leading to HOX gene activation; finally the HOX genes involved in the orchestration of phenotype specific gene program mostly through the fine regulation of mRNA transcription [4].

The HOX network regulates multiple cellular processes, such as acquisition and maintenance of spatial and temporal cell allocation, cell identity, control of cell growth and proliferation, cell-cell communication, anteroposterior patterning during embryonic development, and organogenesis. Most of these functions were established in cooperation with other molecules and factors. So far, several mutations of homeobox genes have been described, that lead to dysregulation of any of these functions and association with different human diseases including different types of cancers [15].

Cancer can be a consequence of the alterations in specific steps of each of the processes concerning cell growth, proliferation and differentiation, cell communication and apoptotic pathway. There is a connection between embryonic development and cancer [20]. An increased incidence of paediatric cancers and stillbirths is found in individuals born with a human cervical rib, a congenital anomaly observed also in transgenic mice with mutation in homeobox genes. Thus, homeobox genes appear to regulate normal development and normal and abnormal cell proliferation [21].

Major abnormalities of homeobox gene expression have been identified in many primary solid tumors (kidney, colon, small cell lung cancer). Three categories of homeobox gene expression in malignant cells have been defined by Abate-Shen [22]. An experiment was made to detect the expression of HOX-A7, HOX-C5 and HOX-D13 in normal and malignant lung tissue, which had been found earlier in most of the SCLC cell lines, but not in adult lungs [23]. There were samples from tumors taken from smokers and samples from normal lung tissue mainly from non-smokers. In the analysis of the non-cancer tissues from the non-smokers, no expression of HOX-A7, HOX-C5 and HOX-D13 was detected. Only one sample of the normal lung tissue, from a smoker, expressed HOX-C5. HOX-C5 and HOX-D13 were also expressed in most of the tumor samples. HOX-A7 was expressed in all five tumors tissues in which it was measured. In the normal lung parenchyma taken from sites distant from tumors only a few expressed HOX-C5 and HOX-D13, but HOX-A7 was expressed in 3 of 5 samples. This increased expression may be an early pre-transformation event, occurring in carcinogen-exposed, but non-transformed cells. The HOX gene expression has been linked to apoptosis: lack of expression of HOX-A5 in breast cancer may be responsible for loss of expression of p53 [23].

It has recently been demonstrated the involvement of homeobox genes in evolution of colon cancer [24]. Cdx1 and Cdx2 genes are involved in differentiation of intestinal epithelium and regulate the early stages of colon embryonic development [25]. The expression of isolated HOX genes (HOX B7 and HOX C6), it was studied, in vitro, during the CaCo2 cell differentiation [26].

Recently it has been demonstrated that HOX genes are involved in the pathogenesis of cancer. A large number of HOX genes are altered in several tumors; HOXA7 e HOXD13 in the lung cancer [27], HOXC4 E HOXC8 in the prostate cancer [28], HOXB7 in ovarian and breast cancer [29], HOXA10 in endometrial cancer [28], HOXA5 in breast cancer [30]. The reduction of HOXD10 in epithelial cells, is related to an increase of malignancy [31]

Leukemias, as myeloid leukemia (AML) and acute lymphoid leukemia (ALL) are characterized by deregulation of HOX genes [16,32-34]. Homeobox genes are able to induce translocation and fusion in hematologic neoplasia [35,36,37]. The translocation of t (7;11) (p15, p15) in acute myeloid leukemia, was determined by a fusion of HOXA9 protein with amino terminus region NUP98 [13,38]. Hematological neoplasia was due to HOX gene deregulation, with a strong collaboration with other gems. In details HOXA9 and MEIS-1 genes were specifically expressed in AML and this gene is highly correlated with poor prognosis in AML [39-42]. The HOXA locus was always expressed in T-cells acute lymphocytic leukemia sample [43-44]. Moreover, HOXA cluster was upregulated in mixed-lineage leukemia (MLL), suggesting that HOXA locus was highly involved in these leukemias [45], whereas HOXA9, HOXA10, HOXB3, HOXB6 and HOX B8, were able to induce leukemia latency. Furthermore, the co-upregulation of genes plays a crucial role in the progression of leukemia. For example MEIS-1 was an interactor of many HOX genes, mainly with HOXB4, inducing the onset of pathology [46-48]. Finally, alteration of HOX gene network was crucial in several leukemic pathologies.

On the basis of data present in literature, we could hypotize that homeobox genes act as a system to decode several cancer types and also this gene play an important role in oncogenesis and may have a high value in clinical diagnostics.

In conclusion, we could consider HOX gene network crucial not only for clinical diagnostics in cancer, but also for characterizing all human cell phenotype. Considering the role of Class I Homeobox genes in the epigenetic control of human cell memory program, cell phenotypes, HOX cluster could be used as “the Rosetta stone” of human cell biology.