Institute of Biochemistry and Biotechnology, University of Veterinary and Animal Sciences Lahore, 54000, Pakistan

Copyright: © 2014 Khan A, et al. This is an open-access article distributed under the terms of the Creative Commons Attribution License, which permits unrestricted use, distribution, and reproduction in any medium, provided the original author and source are credited.

Hair is the most frequently found trace evidence in the crime cases. It assists in establishing a triangular relation between a crime scene, a victim and a criminal. Morphology of hair can be helpful in forensic investigations to distinguish hair from one race to another. In this context for the purpose of analysis, cuticle inner margin (distinct or not distinct), cuticle thickness and ovoid bodies (present or absent) were considered. Four different castes (Awan, Butt, Gujjar and Rajput) were selected to analyze the structural similarity and differences from each other. Compound microscope was used for purpose of observation. There was no significant gender based difference among all castes. But significant differences were found among individuals of different castes. The purpose of this study was to develop a data base by analyzing the cuticle thickness, inner cuticle margin and ovoid bodies in human head hair in different races of Pakistan to narrow down forensic analysis in criminal scene investigation.

Human hair analysis is of substantial importance in forensic sciences field. Hair is most commonly found evidence on crime scene and needs prime attention in solving a crime situation [1-8]. Hair analysis is conducted at different levels as gross, microscopic and molecular based. In gross analysis, visual characteristics of hair are observed as color, length, texture and type. In microscopic analysis, more detailed hair characteristics are noticed that finally help to establish a correlation between a suspect and a crime scene or a suspect and a victim [3,4]. But this cannot be a substitution for the DNA based molecular analysis that is ultimately the most valuable evidence. Microscopic analysis of human hair has been done previously in different regions of the world and significant differences have been noticed across species [6-19]. Some researchers have found distinguishable feature even in same specie as human that are present in different regions of the world [2,5]. On the basis of inter-race differences, human hairs are characterized in three main groups, Caucasian, Negroid, or Mongoloid [7,9-12]. The designation of these racial groups is based upon an evaluation of the microscopic characteristics present in the hair. Keeping in view the physical differences in individual hairs, present study was planned to find such differences in the individuals of different castes in Asian region. For this purpose, four castes of Pakistan were selected as Awan, Butt, Gujjar and Rajput. Because of high degree of endogamy, the individuals in one caste retain much of the phenotypic features including hairs characteristics as well.

For the purpose of analysis, three parameters were selected that were cuticle thickness, inner cuticle margin and ovoid bodies. Cuticular layer comprises of various types of scales that envelop the hair shaft completely. These include coronal which means crown type, spinous that is petal-like form and imbricate meaning flattened type. The possible arrangements and variants of such forms are present among different species and even in persons belonging to different regions [3]. Ovoid bodies are the part of cortex. Ovoid bodies are highly impenetrable, defined margins, oval structure and present in non-dispersive form. Analysis was done using light microscope. Hair samples from the representatives of respective castes were collected and after analysis, no significant differences were noted for cuticle thickness and inner cuticle margins but significant differences were noted in ovoid bodies among the hairs of different castes.

Head hairs were collected from various castes to analyze the structural similarity or differences from each other. 15-20 hairs per individual were collected. Samples were plucked from different areas of head using tweezers. Some were taken from right side; some from left side and in similar pattern hair from front and back side of head were plucked and packed in separate envelopes. All envelopes were labeled and then sealed with transparent tape.

For purpose of analysis compound microscope was being used. Some strands of hair were placed on slide in parallel fashion. Then few drops of per mount were dropped on cover slip and it was placed over the slide to fix the hairs. Hairs were under compound microscope at 10X, 40X, 100X and 400X. Details of the hair structure have been shown in Figure 1. Cuticle thickness, inner cuticle margin and ovoid bodies were observed as reported by Zafarina and Panneerchelvam [13,15,18]. 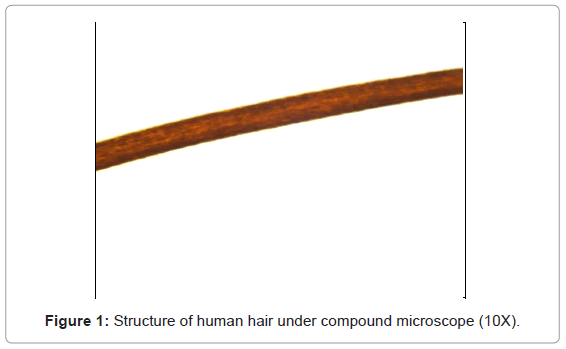 After observing all hairs samples for three parameters, following results were obtained: Figure 3: Comparison of inner cuticle margin in male and female of different castes.

Samples which showed distinct inner cuticle margin were then further examined for cuticle thickness. For this parameter in males, twenty five total samples were examined in Awans. Sixteen samples showed cuticle thickness and nine samples had thin cuticle. In butt, twenty one samples were distinct from which fourteen had thick cuticle and only seven had thin. In caste of Gujjar, again twenty samples showed distinct and thirteen of them appeared as thick and eight had thin cuticle. In case of Rajput caste, twenty three samples were distinct. Cuticle thickness results showed that there were fourteen samples with thick cuticle and nine had thin cuticle. These results showed that there was maximum cuticle thickness in males of Awan (Figure 4). P-value for this character was 0.980, which is greater than 0.05. Contingency coefficient value was 0.045 showing lesser association in results (Table 2).

Figure 4: Cuticle thickness in male and female of different castes.

All female hair samples having distinct values were also further checked for cuticle thickness. The results of Awan caste showed that out of twenty three total samples seventeen have thick cuticle and only six have thin cuticle. Similarly in caste Butt twenty one out of twenty five samples show thickness and only four appeared as thin. So this caste has maximum number of thick samples. The results of Gujjar caste displayed eighteen thick and six thin samples out of twenty four and Rajput caste has nineteen thick samples of cuticle and six are showing thinness from the total of twenty five samples (Figure 4). P value was calculated as 0.829. The contingency coefficient is 0.095 which is showing no association between castes (Table 2). Tables 3 and 4 indicates the symmetric measures of cuticle thickness in males and females of different castes. 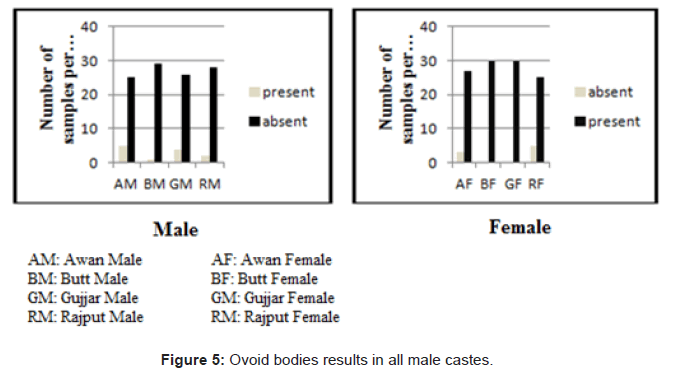 The aim of the research study was to create a data base of some regional castes of Pakistan to help and narrow down the search of criminals during forensic investigations. In this study, hair samples were collected from four castes (Awan, Butt, Gujjar and Rajput) and inner cuticle margin, cuticle thickness and ovoid bodies were analyzed for observing similarities or difference among individuals. Out of these three parameters, ovoid bodies were the only characteristic that varied among hairs of different individuals in both genders. In one caste, due to high ratio of endogamy, individuals retain their phenotypic properties for hairs, skin and others. Previously, Robertson and Aitken (1986) reported such individual differences [12]. Ogle, in 1998 also studied the phenotypic differences in individual hairs and found significant variation that was well applied in forensic analysis [8]. In 1983, Strauss described the hair features that were important in investigations [14]. A more detailed description of these features was seen in the research of Zviak and Dawber (1986) that are still considered valid and significant in comparative hair analysis [19].

Present study was designed to investigate gender based and individual based comparison of different castes present in Pakistan. Most of comparisons were found non-significant. Only significant difference was observed in presence of ovoid bodies.

This study is a first step towards the physical analysis of hair for individualization. No one has yet conducted such type of study in Pakistan before. From this study a data base have developed of different castes of Pakistan. This is the first step of studying caste system within a country and needs further attention to study other hair parameters as well so that valid parameters giving significant results can be sorted out and recommended to be included in forensic investigation.