Copyright: © 2013 Wu J. This is an open-access article distributed under the terms of the Creative Commons Attribution License, which permits unrestricted use, distribution, and reproduction in any medium, provided the original author and source are credited

The immune stimulatory cytokine interleukin-15 was recognized as one of the most promising cancer cure drug in a NIH guided review and is currently in clinical trial alone or as an adjuvant for certain types of metastatic solid tumors. IL-15 is an essential survival factor for natural killer (NK), natural killer-like T (NKT), and CD44hi memory CD8 T cells. The bioactivity of IL-15 in vivo is conferred mainly through a trans-presentation mechanism in which IL-15 is presented in complex with the α-subunit of soluble IL-15 receptor (IL-15R) to NK, NKT or T cells rather than directly interacts with membrane-bound IL-15R. With these understandings, recent studies have been focused on generating IL-15 agonists which consist of IL-15 and partial or whole of soluble IL-15R to improve its in vivo bioactivity. This mini review will summarize the key features of IL-15 as a potential cancer treatment cytokine and the most recent development of IL-15 agonists and preclinical studies. Critical milestones to translate the pre-clinical development to in-patients treatment are emphasized.

The γ-chain family cytokine IL-15 has long been recognized to be growth promoting cytokine for NK, NKT, and memory CD8 T cells in vivo [1,2] and considered one of the most promising drugs that can cure cancer in an NIH cancer treatment review [3]. IL-15 functions through the trimeric IL-15 receptor complex, which consists of a high affinity unique binding IL-15Rα chain that confers receptor specificity for IL-15 and the common IL-15Rβ and γ-chains (also known as IL- 2Rβ/γ) shared with IL-2. Although IL-2 is currently the only FDA approved cytokine for cancer therapy, IL-15 has superior advantage in cancer treatment over IL-2 including: 1) low toxicity with improved efficacy in stimulation NK cell proliferation and sustaining memory CD8 T cells [4-6]; 2) supporting the survival effector CD8 T cell instead of promoting activation-induced cell death (AICD) [7]; 3) priming NK cell target-specific activation by upregulating signaling of the NK cell activating receptor NKG2D [8,9]; 4) important but not last, not inducing expansion of regulatory T cells [10]; 5) lastly, IL-15 has recently been shown to have the ability to direct differentiation of cancer stem cells (CSC), at least in renal cell carcinoma model [11]. Due to these unique features, IL-15 has been exploited extensively in the current years as a potential cancer treatment drug. Recombinant human IL-15 (rhIL-15) either alone or in combination with other regimens has entered phase I/II clinical trials for treating various types of cancer (Table 1).

The most uniqueness of IL-15 among other therapeutic cytokines is its trans-presentation signaling mechanisms in which IL-15Rα from one subset of cells presents IL-15 to neighboring NK cells and/or CD44hi memory CD8 T cells which express only IL-15Rβ/γ receptor [12].

Trans-presentation is currently thought to be the major mechanism by which IL-15 exerts its biological effects in vivo [12,13]. Indeed, IL-15 was found to be presented normally in the circulation of both human and mice in the format of heterodimer with sIL-15Rα [14,15]. The trans-presentation concept has been exploited in improving the therapeutic efficacy of IL-15.

IL-15 monomer has a short half-life of less than 40 min in vivo and also weak binding affinity to sIL-15Rα for trans-presentation [16]. These aspects may limit its therapeutic potential. Recent studies have been focused on generating modified forms of IL-15 agonist to improve the in vivo pharmacokinetics and ability for trans-presentation of IL-15. To date three main modifications are being pursued in preclinical treatment of cancer (Figure 1): 1) pre-association of IL-15 and its soluble receptor a-subunit-Fc fusion to form IL-15:IL-15Rα-Fc complex (Figure 1a) [17-20]; 2) expression of the hyperagonist IL-15- sIL-15Rα-sushi fusion protein consisted of IL-15 and the recombinant soluble sushi domain of IL-15Rα which was identified to have the most binding affinity for IL-15 (Figure 1b) [21,22]; 3) pre-association of human IL-15 mutant IL-15N72D (residue substitution at position 72) with IL-15Rα sushi-Fc fusion complex (Figure 1c) [23]. All three forms of agonists showed these common improved features than native IL-15 in vivo: prolonged half-life and higher potency due to effective trans-presentation. 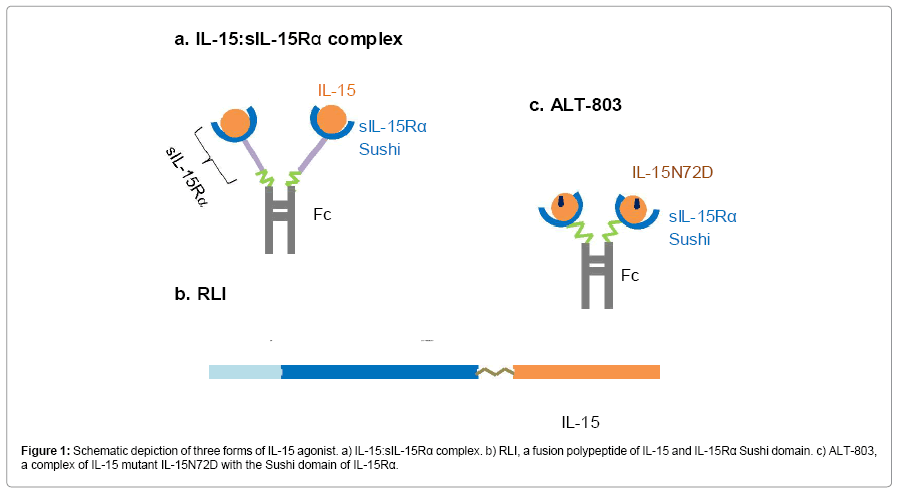 The IL-15 hyperagonist, IL-15-sIL-15Rα-sushi fusion protein consisting of IL-15 and the recombinant soluble sushi domain of IL- 15Rα which bears most of the binding affinity for IL-15, was shown to be more effective than IL-15 in reducing metastasis of B16F10 melanoma and enhancing host survival [3]. RLI has nearly 20-fold of bioactivity binding to IL-15Rβ/γ than native IL-15 and a half-life of 3h in vivo [3]. In in vitro assay, RLI showed more potency and persistent effect in stimulating lymphocyte proliferation, largely due to its ability to trans-present IL-15 [16,17]. The latest hIL-15N72D: hIL-15Rα sushi-Fc fusion complex (also named ATL-803) developed by Altor BioScience Corporation, has a residue substitution in IL-15 polypeptide at position 72 (asparagine to aspartic acid, hIL-15N72D) with improved binding affinity of IL-15/IL-15Rα complex to IL-15Rβ/γ. In this complex, hIL- 15N72D only associates with the sushi-domain of hIL-15Rα. A single dose of ATL-803 was able to eliminate well-established myeloma cells in the bone-marrow of myeloma-bearing mice. Beyond the immediate therapeutic effect, these mice were able to reject re-challenge with the same tumor types due to expansion of CD44hi memory CD8 T cells [24]. ALT-803 has at least 25 times the activity of the native IL- 15 and 25 h of half-life in mice. These studies strongly support the notion that IL-15 agonists in combination with other regimens may provide curative future for cancer patients. ALT-803 will soon be in phase I/II clinical trial for treating relapse of hematologic malignancy after allogeneic stem cell transplant (NCT01885897) and advanced melanoma (NCT01946789).

By principle, all three forms have more potent immune stimulatory effect than the cytokine IL-15 due to the ability of trans-presentation. Which of the three forms of IL-15 agonists are more optimal for cancer treatment with least systemic toxicity is presently unknown. As IL-15 is also a pro-inflammatory cytokine and also play an important role in autoimmune diseases. Elevated serum IL-15 level or aberrant IL- 15 signaling has been associated with several autoimmune diseases, including pemphigus vulgaris, rheumatoid arthritis, systemic lupus erythematosis, sarcoidosis, multiple sclerosis, celiac disease, as well IBD [25,26]. Mice with aberrant over expression of IL-15 in mice were reported to develop hematological malignancy [27-29]. This suggests that long-term treatment with IL-15 may bear the risk of developing autoimmune diseases. Moreover, a number of studies have shown that IL-15 or soluble IL-15Rα also plays a role in triggering cancer cell, best exemplified in renal cell carcinoma, epithelial-mesenchymal transition (EMT), which is considered a critical step for cancer cell metastasis [30-32]. With these in mind, the choice of IL-15 agonist and the optimal treatment platform have to be carefully investigated in the coming years with the goal to achieve an effective treatment with controlled autoimmunity.

Supported by NIH grant 1R01CA149405 and A. David Mazzone — PCF Challenge Award to J.D. Wu. Thanks to John Jarzen for helping with the Figure drawings.