Copyright: © 2016 Matsuzaki E, et al. This is an open-access article distributed under the terms of the Creative Commons Attribution License, which permits unrestricted use, distribution, and reproduction in any medium, provided the original author and source are credited

Apical periodontitis is a relatively frequently encountered disease in clinical dentistry; however, its pathogenesis and etiology are not easily elucidated. Therefore, it is not always cured, even when carefully following the highest standards of treatment and intractable apical periodontitis may occur. In addition, in long-term root canal treatment of difficult cases with intractable pain, there may be misunderstandings between the dentist and patient. While acute pain is an indispensable symptom in detecting lesions and disease, sustained chronic pain can decrease an individual’s quality of life with various negative outcomes, including decreased motivation to work. Therefore, endodontic treatments and pain control measures for a diseased tooth in intractable apical periodontitis must be developed. This review outlines the progression from the onset of the lesion and examines the immunology of apical periodontitis based on studies of model animals, indicating that interleukin-1β is a key factor in elucidating the disease state and is expected to lead to the development of an effective treatment for refractory cases. Figure 1:Model for the regulation of bone remodeling. This mechanism can work even in the pathological state because of immune system.

In many cases, the abscess destroys the relatively thin bone cortex on the buccal or lingual side. Abscesses form under the periosteum, causing the inflammation to expand further into the surrounding soft tissue, which can result in the formation of a fistula and a shift from acute apical periodontitis to chronic apical periodontitis. 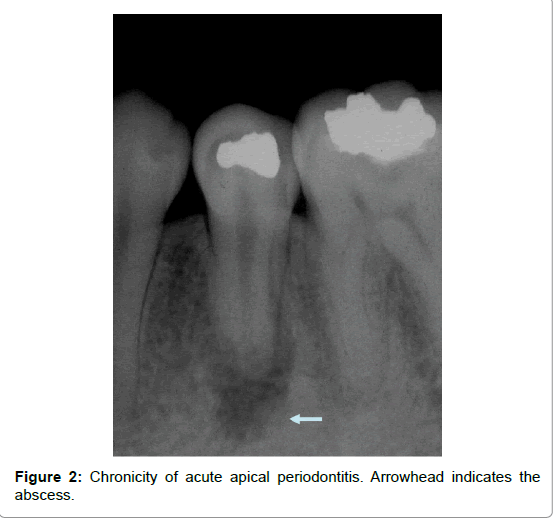 Figure 3:Histological finding (A) and X-ray (B) of periapical granuloma. (A) Development of granulation tissue is observed. (B) Clear radiolucency is observed. Figure 4:Histological finding (A) and X-ray (B) of radicular cyst. (A) As a result of proliferation of the epithelial rests of Malassez within the lesions, the epithelial layer is observed. (B) Densification of bone is observed in the vicinity of the lesion.

In contrast, when the bacterial infection in the root canal weakens, the lesion shifts from the active phase to the repair phase. Granulation tissue grows in the abscess, gradually absorbing the abscess and shifting into granulomatous inflammation. At this stage, it is considered to be a periapical granuloma and many macrophages and lymphocytes can be observed in the lesion (Figure 3). In chronic periapical abscesses or periapical granulomas, epithelial rests of Malassez often proliferate within the lesions (Figure 4) and can occur as cysts [1].

In apical periodontitis, tissue destruction is caused by both the bacterial infection and the immune response, as a biological defense reaction to remove the pathogenic substances. If the causative agent is removed by the immune reaction, restoration of the immune response is activated and tissue repair and healing can occur (Figure 5). 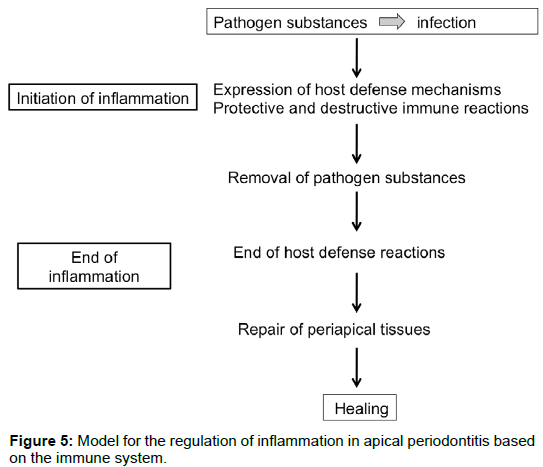 Figure 5:Model for the regulation of inflammation in apical periodontitis based on the immune system. 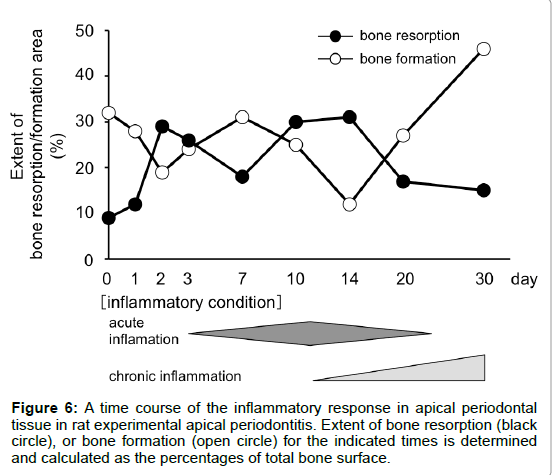 Figure 6:A time course of the inflammatory response in apical periodontal tissue in rat experimental apical periodontitis. Extent of bone resorption (black circle), or bone formation (open circle) for the indicated times is determined and calculated as the percentages of total bone surface.

Cytokine Involvement in the Immune Response during Acute Apical Periodontitis

Among these numerous cytokines, IL-1 and TNF are thought to be powerful osteoclast-activating factors; thus, they have attracted increasing academic attention. In a clinical endodontic report, high IL- 1-like activity was detected in the root canal exudate of a patient with apical periodontitis and clinical symptoms. IL-6 acts as an osteoclastactivating factor, as well as a growth factor for B lymphocytes, promoting antibody production. Furthermore, it affects the differentiation and activation of T lymphocytes. IL-8 is a chemokine responsible for the migration and activation of neutrophils, T lymphocytes, and basophils. These inflammatory cytokines increase the production of prostaglandins and proteases at inflammatory sites, enhances inflammatory reactions and induce the destruction of apical periodontal tissue.

Cytokines are signaling molecules that mediate and regulate immunity, inflammation, hematopoiesis, and many other cellular processes via cytokine networks [6]. Moreover, they are believed to be deeply involved in the onset and exacerbation of apical periodontitis (Figure 7).

A number of recent reports have suggested the involvement of biofilms formed by various bacteria on the apical foramen inside and outside the apex in prolonged inflammation [7]. It has been suggested that pulp deactivators, including arsenite and paraformaldehyde, as well as intracanal disinfectants, including phenol and formocresol, induce fairly strong irritation. When these irritants are used incorrectly, they leak into the periapical tissue and cause severe inflammation, inducing symptoms of acute apical periodontitis. Application of the excessive formocresol in root canal triggers the expansion of apical lesion, leading to the activation of osteoclasts and macrophages expressing IL-1β in the vicinity of bone, resulting in bone resorption (Figure 8).

Although formocresol is a powerful disinfectant, it can cause tissue damage. Apical periodontitis induced by pharmacological factors exhibits severe inflammation, and clinical symptoms are more persistent than those caused by mechanical stimulation. The effects of formocresol applied directly to the open apex are thought to be related to severe destruction of periapical lesions, resulting in markedly higher infiltration by inflammatory cells. This induces IL-1β overproduction by macrophages, exacerbating the periapical lesion and leading to apical periodontitis. A recent report suggested that IL-1β has a central role in tissue destruction in apical periodontitis [8]. In bacterial infections, IL-1β production is essential to the biological defense system; however, overexpression of IL-1β interferes with normal healing and leads to intractable inflammation. Figure 7:Model for the bone destruction mechanism and proinflammatory cytokines in the periapical lesion.

Table 1: Involvement of cytokines in the immune response and bone destruction. Figure 9:Model for the regulation of osteoclast differentiation and RANKRANKL system.

Cellular Mechanisms of Bone Destruction in Apical Periodontitis: Involvement of TNFS and Osteoclasts

In periapical regions, the bone remodeling mechanism is maintained by a delicate balance of bone resorption and formation. Failure of this balance due to the production of cytokines associated with prolonged inflammation impedes apical periodontitis healing, allowing it to become intractable. Particularly, pro-inflammatory cytokines such as IL-1β and TNFα are osteoclast-activating factors. They recently discovered involvement with skeletal system cells, including osteoclasts, as well as their role in the immune system has led to the proposal of osteoimmunology as a new branch of science studying bone immunology [9]. In periodontitis, osteoclasts aid in the resorption of alveolar bone. Receptor activator of NF-κB ligand (RANKL) is essential for inducing osteoclastogenesis. Osteoblasts and bone marrow stromal cells produce RANKL, and its signal is transduced by its specific receptor, RANK, which is expressed on the cell surface of osteoclast progenitors. IL-1β produced by macrophages affects osteoclastogenesis indirectly by altering osteoblast RANKL expression; it also influences osteoclast maturation directly.

The Role of Macrophages

Macrophages produce both bone resorption cytokines and osteoblast growth factors such as transforming grow th factor (TGF)-β [12]. TGF-β primarily inhibits T cell proliferation and blocks the effects of pro-inflammatory cytokines. It has been suggested that macrophages are not only related to enhancing tissue destruction in apical periodontitis, but also to the suppression of tissue destruction and the activation of healing mechanisms [13].

Anti-cytokine therapies that attempt to reduce inflammatory cytokine activity by controlling their production have attracted attention for their potential in treating intractable diseases [14]. Recent animal and human studies have shown that blocking IL-1 activity may be therapeutically beneficial. For example, IL-1RA or soluble type IL-1R treatment reduces the severity of endotoxin-induced sepsis and impedes the progression of arthritis in experimental models [15]. Additionally, IL-1β-converting enzyme inhibitor blocks the progression of type II collagen-induced arthritis in mice [16]. In an attempt to find an effective novel cure for periapical lesions that have difficulty in subsiding due to severe inflammation, healing mechanisms could be activated by suppressing IL-1β production and secretion using a combination of antibacterial agents and IL-1β inhibitors. However, the mechanisms underlying the pathogenesis and progression of periapical lesions remain unclear; additional research is necessary to define the roles of immunological elements such as inflammatory cytokines like IL-1β in order to develop more effective treatments for refractory periapical lesions.