Copyright: © 2016 Shah SA, et al. This is an open-access article distributed under the terms of the Creative Commons Attribution License, which permits unrestricted use, distribution, and reproduction in any medium, provided the original author and source are credited.

Introduction: COPD and asthma contribute to high morbidity and mortality along with a significant social and economic burden. Patients often turn to Nutraceuticals as adjunct therapy for disease management. Jeeva® is a novel plant based therapeutic option that integrates several nutraceuticals known to have immune-modulatory, antiinflammatory and antioxidant properties. We sought to determine the magnitude of benefits of this novel integrative approach in patients having COPD ± asthma. Methods: A retrospective evaluation of patient records was performed for all COPD and/or asthma patients who had consented to initiate Jeeva®. Demographic data, past medical history, and spirometry data (FEV1, FVC, FEV1/ FVC, FEV1% predicted, FVC% predicted, FEV1/FVC% predicted) were collected. The primary endpoint was the maximum change in FEV1 and FVC pre-bronchodilator from baseline. A paired students’ t-test was utilized to compare the maximum change post- Jeeva® from baseline. Intent-to-treat (ITT) analysis was performed using the last-observation carried forward methodology. Results: A total of 24 patients were included for analyses. The average duration of Jeeva® consumption was 10.4 ± 5.5 months. There was a statistically significant change in FEV1 and FVC from baseline [1.72 ± 0.56 L to 1.98 ± 0.71 L; (p < 0.001) and 1.88 ± 0.72 L to 2.03 ± 0.70 L (p = 0.004) respectively]. All other endpoints also improved significantly from baseline. Conclusion: Jeeva® improved pre-bronchodilator FEV1 and FVC by 264 mL and 314 ml from baseline. This is the first study suggesting significant improvements in objectively measured PFT markers after consumption of the plant-based nutraceutical Jeeva®. Further studies looking at Jeeva® in prospective, controlled settings are warranted.

Chronic Obstructive Pulmonary Disease (COPD) and asthma are major causes of morbidity and mortality globally with COPD being the third leading cause of death [1]. COPD usually leads to persistent and progressive airflow limitations with enhanced chronic inflammatory responses and fibrosis in the airways that impacts activities of daily living and quality of life. According to the CDC, asthma accounts for one-quarter of all emergency room visits in the U.S. each year and over 3,000 deaths each year [2]. Although preventable to a certain degree and definitely manageable, COPD and asthma result in a significant social and economic burden [3].

The estimated total cost for the two conditions was approximately $68 billion in 2008 [4]. Starting in 2015, the Centers for Medicare and Medicaid Services (CMS) plans to expand its Hospital Readmission Reduction Program (HRRP) to include COPD. This is driven by the fact that 23% of COPD hospitalizations are subsequently readmitted within 30 days post discharge [5].

Current pharmacologic options for the management of COPD and asthma typically include short acting and long acting beta2-agonists, anticholinergics, and inhaled glucocorticoids. However, none of the existing medications or regimens have been conclusively shown to modify the long-term decline in lung function [6].

Several plant based therapeutic options such as ginseng extract, yiqibushenhuoxue decoction, Bufei granules, and Weijing decoction have been purported to have pulmonary function improving properties [12-15]. Jeeva® is a novel plant based therapeutic option that integrates several nutraceuticals known to have immune-modulatory, anti-inflammatory and antioxidant properties (Table 1) [16-32].

Many patients claim to have improved disease related quality of life, but no systematic evaluation has been performed with Jeeva®. We completed the first retrospective assessment of patients having COPD and asthma treated with Jeeva at a private physician’s office.

We performed a retrospective evaluation of patient records from 2012 to 2014 at a private physician’s office in Roseville, California. The primary practitioner specializes in internal medicine and holds board certification in the practice of alternative medicine. All patients voluntarily signed an informed consent document before initiation of Jeeva®.

Patients were selected for analysis if having a diagnosis of COPD and/or asthma, and consumed Jeeva® (1-3 capsules daily based on clinical judgement) for at least 90 days in addition to standard of care.

Patients were only included if having baseline and at least 1 follow up visit with spirometry data (FEV1 and FVC measurements).

Forced expiratory volume in 1 second (FEV1), defines the volume of air that can be forced out in one second after taking a deep breath and forced vital capacity (FVC) measures the volume of air forcibly exhaled from the point of maximal inspiration both of which are accepted objective markers of pulmonary function. Those under 18 years of age were excluded. Patients were not excluded based on any co-morbidity.

A comprehensive chart review was conducted to collect demographic data, past medical history, and spirometry data. Medication history was collected but not tracked serially due to the limited availability of data.

A paired students’ t-test was utilized to compare the baseline to the max change post- Jeeva® for all endpoints with a p < 0.05 considered significant. For patients with missing data, an intent-to-treat (ITT) analysis was performed using the last-observation carried forward methodology.

Since some patients had exaggerated effects, changes in FEV1 and FVC > 1L from baseline and >0.20 with FEV1/FVC from baseline were considered as outliers and excluded.

Fourteen patients (58%) had hypertension, six (25%) had diabetes and six (25%) had coronary artery disease. Relevant comorbid past medical history included allergic rhinitis (63%), anxiety (29%), and chronic sinusitis (13%). Twelve patients were on short acting beta-2 agonists (50%), eleven on a long acting beta-2 agonist and corticosteroid combination (46%), six on anticholinergics (25%), two on inhaled corticosteroids (8%), and one on a leukotriene modifier (4%). Average duration of Jeeva® consumption was 10.4 ± 5.5 months. 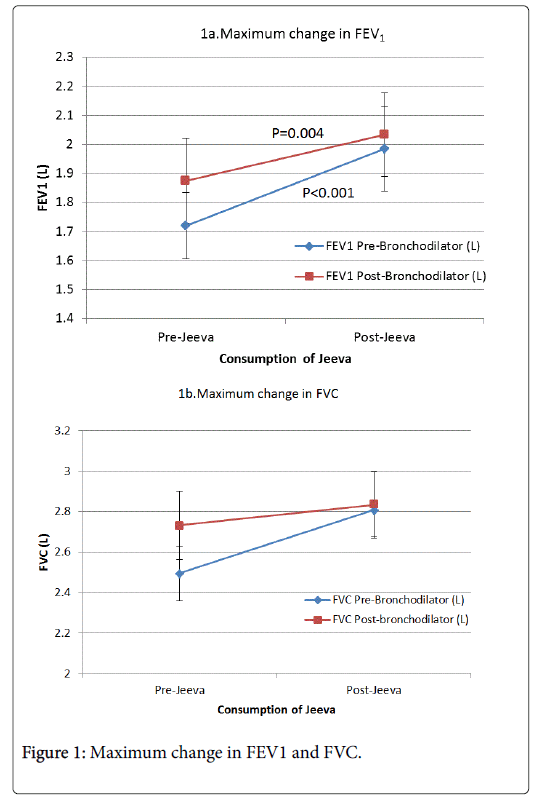 In our assessment of patients consuming Jeeva® for over 10 months, FEV1 and FVC pre-bronchodilator increased by 264 mL and 314 ml from baseline respectively. In a randomized, double-blind study by Murali et al., a proprietary product DCBT1234-Lung KR was compared to a salbutamol/theophylline/bromhexine combination and a lactose placebo [33]. After 6 months (n = 39) FEV1 changed significantly from 1.32 ± 0.61 L to 1.50 ± 0.72 L post DCBT1234-Lung KR. The comparator arms showed non-significant changes. In another study ginseng extract significantly increased FEV1 and FVC by 27% and 32.5% from baseline [12]. The impact of salmeterol, fluticasone, and salmeterol/fluticasone combination on pulmonary function parameters was compared in a randomized controlled trial [34]. After 12 months of treatment, the changes in FEV1 pre-bronchodilator from baseline were 78 ml, 41 ml, and 88 ml in the three groups respectively. Similarly, the mean improvements in FVC were 139 mL, 57 mL, and 57 mL after salmeterol, fluticasone, and salmeterol/fluticasone combination, respectively [34].

The respiratory system undergoes various physiological, immunological, and anatomical changes with age [35]. The estimated rate of decline in FEV1 is 25-30 mL/yr starting at age of 35-40 years and can double to 60 mL/yr after the age of 70 years [35]. FVC generally declines at approximately 22 mL/yr in healthy subjects (20 to 60 years) [36].

Chronic inflammation in the lungs can lead to narrowing of airways, destruction of parenchymal tissues, and other structural damages leading to a further decline in pulmonary function [36]. Jeeva® contains ingredients with anti-inflammatory, antioxidant, and immunomodulatory properties (Table 1) potentially explaining the mechanism behind the benefits seen in PFT markers. Based on some of the known literature on the ingredients, Jeeva® may be beneficial in long-term disease prognosis and reversibility of COPD.

There is a direct relationship between the severity of COPD and the cost of care justifying an accurate cost-benefit analysis of the available therapeutic options [37]. It is believed that the cost of estimated medical expenditure for COPD ($2507/year per patient) often underrepresent the true costs [38]. Factoring in sociodemographic characteristics (age, race, education level, etc.) and indirect costs (care provided by family member), the true adjusted cost of COPD is anticipated to be much higher at $4932/year per patient [38].

In our analyses, Jeeva® posed benefits of similar magnitude (P FT parameters) and of clinical importance warranting further investigations. Whether Jeeva® used as monotherapy, or complementary to the current pharmacotherapeutic standard-of-care for COPD/asthma needs future evaluation.

Our analysis has several limitations worth noting. We could not evaluate changes in medications due to limited data. It is possible that the large magnitude of benefit seen in our results is compounded by concurrent changes in medications. A systematic assessment of patient symptoms and adverse effects was not extracted. Further, disease related hospital admissions were not assessed. Future studies should assess hospital readmission along with a standardized assessment of quality of life.

A lack of a control arm and a small sample size pose inherent limitations in data extrapolation and wide applicability. While Jeeva® is manufactured by an FDA approved manufacturer, the potency of herbal raw ingredients can vary based on the location and season of the harvest making it difficult to ascertain standardization in Jeeva® capsules [39]. Since the active moieties of the different herbal ingredients in Jeeva® need further discovery, an understanding of the pharmacokinetic profile remains unknown (Table 2).

Jeeva® improved pre-bronchodilator FEV1 and FVC by 264 mL and 314 ml from baseline. This is the first study suggesting significant improvements in objectively measured PFT markers after consumption of the plant-based nutraceutical Jeeva®. Further studies looking at Jeeva® in prospective, controlled settings are warranted.