Copyright: © 2016 Wani MA, et al. This is an open-access article distributed under the terms of the Creative Commons Attribution License, which permits unrestricted use, distribution, and reproduction in any medium, provided the original author and source are credited.

Objective: Mental health refers as the individual’s adjustment with a maximum of effectiveness, satisfaction, happiness and socially considerate behaviour and the ability to face and accept the reality of life. Excess use of drugs largely affects individual’s mental health. The present research paper explored the impact of drug addiction on mental health.
Method: The present study consists of 60 subjects randomly selected among which 30 were adolescents (15 males and 15 females) and 30 adult’s (15 males and 15 females). The P.G.I Health Questionnaire N-I constructed by Varma, Wing and Pershad was used to measure the mental health of drug addicts. The effect of two experimental variables (age and gender) was study on one criterion variable (mental health). For data analysis mean and two way analysis of variance (ANOVA) were applied.
Results: The results revealed that age and gender have significant effect on mental health of drug addicts. Also adults and female addicts show better mental health than adolescents and male addicts. The obtained F ratio was found significant at 0.01 level of significance.
Conclusions: On the basis of our findings it is concluded that age and gender are the influential factors in mental health.

Health is the level of utilitarian or metabolic effectiveness of a living being. In humans, it is the general state of a man's brain, body and soul, normally intending to be free from sickness, harm or agony. It is a condition of complete physical, mental, social wee being and not just the nonattendance of malady or illness [1].

The term mental health alludes to cognitive or enthusiastic prosperity of a person. It is about how individuals think, feel and act. Mental health is a condition of prosperity in which each individual understands his or her own particular potential, can adapt to the typical hassles of life and can make a commitment to his or her community (WHO). Mental health is "enthusiastic, behavioral, and social development or ordinariness; the nonappearance of a mental or behavioral issue; a condition of mental prosperity in which one has accomplished a palatable mix of one's instinctual drives satisfactory to both oneself and one's social milieu; a proper equalization of affection, work, and recreation interests" (Med vocabulary's therapeutic lexicon).

Addiction is one of the socio-psychological issues of the current global community [4]. Addiction is an interminable state in which a man expends sedates over and over which prompts steady changes in his behavior, feelings, and thinking in which the individual loses his/her control and damages him/her or others [5]. Drug addiction alludes to physiological compulsion and psychological dependency. It is incessant and ongoing utilization of any medication or compound substance without medical prescription that alters the physical and mental states.

Drug addiction causes different physiological, organic and also psychological problems, distinctive sort of drugs and their items cause diverse issues like stimulant and hallucinogenic drugs produce mental illness with suspicions, intemperate fears, mood disorders and depression. Narcotics and liquor damage the liver, stomach, brain and nerves which results memory loss, restlessness and so forth. Essentially cannabis items likewise prompt emotional instability or a general loss of enthusiasm among clients. Drug dependence is curse which influences the client as well as cause physical and enthusiastic trouble in the family.

In present days no part of the world seems to be free from the scourge of drug trafficking and drug addiction. Millions of drug addicts, everywhere throughout the world, are driving hopeless lives, amongst life and death. Drug abuse in India is as old as somewhere else. From the earliest starting point, cannabis drugs have been being used than soma rasa, dev booty, opium got to be well known, in India during Shivaratri and Holi, everybody, male and female, drinks a beverage made from cannabis leaves and dry fruits. Indeed, even wine is common in our parties, marriage and so forth. Recently a report in Times of India shows children as young as nine years are succumbing to substance misuse [6]. It is exceptionally stunning that Indian students were found using like nail polish, whitener fluids, shoes polish as drug. The dishonorable thing is they additionally use dirty water of their socks as drug. Use of drugs in India is rapidly growing people with different age group use various types of drugs which is a serious cause that is why the Prime Minister Narendra Modi himself called on the youth of India to make India drug free.

Rich source of literature is available that highlights the impact of drug addiction on mental health few of them are mentioned here Khushehmehri et al. [7] investigated that addiction to drugs is common among different age groups. They also found that the young are more disposed to drugs. Nagy [8] in his study discovered that adolescents have indicated differential react to episodic drinking. Results revealed that alcohol consumption significantly damaged the brain of both the adults and the adolescents. Lasser et al. [9] investigated that 44% of the cigarettes smoked have psychiatric or substance abuse disorder. Solowij [10] researched the long term effects of cannabis on the central nervous system. Results uncovered that long term cannabis use (daily or near daily use for 10 years or more) was associated with impairment of selective attention. Fergusson et al. [11] assessed the short term consequences of early cannabis use. They found that youngsters who reported early cannabis use showed early tendencies to delinquency, poor mental health and educational achievement, they are more affiliations with reprobate or substance-using peers and more family dysfunction. Warner et al. [12] uncovered that drug abuse and dependence are more common among men than among women; the sex ratio for drug abuse is closer to equal than that for alcoholism. Mensch and Kandel [13] in their study dropping out of high school and drug involvement found that high school graduates reported significantly more use of cannabis during adolescence than college graduates. Weller et al. [14] led a study on marijuana use and psychiatric illness. They discovered cannabis utilize also co morbid with conduct disorder in children and adolescents and with antisocial personality disorder in adults. Dube and Handa [15] revealed that mental illness among alcohol users is significantly low than those who take other drugs. Results showed that psychotic use more drugs than neurotic and normal people [16-18].

To study the impact of drug addiction on mental health

1. To find the effect of age on mental health of drug addicts

2. To find the effect of gender on mental health of drug addicts

3. To find the interaction effect between age and gender on mental health of drug addicts

1. There would be no significant difference found between the mean scores of mental health of adolescent and adult drug addicts.

2. There would be no significant difference found between the mean scores of mental health of male and female drug addicts.

3. There would be no significant interaction found between age and gender of drug addicts

Variables: In the present study the effect of two experimental variables (age and gender) was found on one criterion variable (mental health).

Measuring tool: P.G.I Health Questionnaire N-I constructed by S.K Varma, N.N. Wing and D. Pershad was used by the investigator for the measurement of mental health of addicts. The questionnaire consists of 38 Items (16 items in Area-A) and (22 items in Area-B). The reliability of the test was measured by test-retest and split half methods and was found significantly high (0.88 and 0.86 respectively). The Area-A and Area-B was scored as 1 and the number of cross from both Area-A and Area-B was scored as 0. 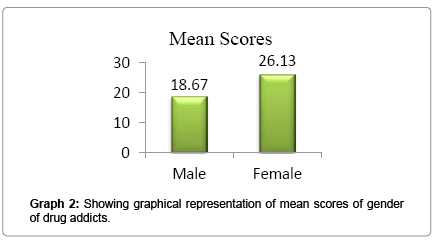 To sum up, taking into account the results of the current study, we might conclude that age and gender of drug addicts is the significant factors in mental health.