+44-1764910199
Impact of Symptoms Duration in Chronic Obstructive Pulmonary Disease is There Any Meaningful Link? | OMICS International

Impact of Symptoms Duration in Chronic Obstructive Pulmonary Disease is There Any Meaningful Link?

Copyright: © 2017 Khalid A, et al. This is an open-access article distributed under the terms of the Creative Commons Attribution License, which permits unrestricted use, distribution, and reproduction in any medium, provided the original author and source are credited.

Aim: To examine the relationship of duration of symptoms with the disease outcomes in patients with COPD. Background: COPD patients have varying degree of symptoms. We hypothesized that duration of symptoms may be useful to understand the disease progression. Methods: This observational study carried out in England. The patients were recruited and followed up between September 1999 and December 2002 and then 2007-2008, respectively. Patient’s demographics were recorded. Medical Research Council Dyspnoea (D) score were used to measure degree of breathlessness and spirometry were utilized to evaluate the severity of disease. Patients were asked about the COPD symptoms and for how long they have these symptoms including shortness of breath, cough, and the duration of their symptoms. Results: A total of 269 subjects were recruited. Of those 227 were with the diagnosis of COPD and 42 as non COPD or control group. The data is normally distributed. The study results show that there is a strong correlation between duration of symptoms and physiological variables both at baseline and at follow up. These include age (p=0.04), pack years (p=0.02), MRC score (p=0.04) and FEV1 (p<0.001).When GOLD stages of severity were used to explore the relationship; it becomes evident that patients with higher GOLD stage had longer duration of symptoms. Conclusion: These findings indicate the possible role of considering duration of symptoms as a useful marker of disease progression and its relationship with other disease outcomes in chronic obstructive pulmonary disease patients.

To date COPD is often undiagnosed or misdiagnosed until it gets advanced [1]. Earlier diagnosis is therefore essential to control or reduce systemic manifestations, comorbidity, and improve health status [2]. Spirometry is considered the gold standard to establishing a diagnosis of COPD alongside patient's symptoms, age and smoking status Additional measurements and tools may be helpful in the differentiating between COPD and asthma [3-7]. Key areas for improvement include enhanced case identification, improved quality and interpretation of findings on spirometry, and increased use of tools such as differential diagnosis questionnaires and in order to achieve optimal outcomes. There is also a need to explore every aspect of the disease, duration of symptoms of duration, for example, to establish a firm diagnosis.

Symptom is a subjective representation of a disease. There are two types of symptoms. A sudden onset and short duration “acute” and a gradual onset and long standing “chronic” symptoms. Acute symptoms commonly occur in cases such as cholecystitis, appendicitis or acute gout that required immediate therapeutic or surgical intervention. On the other hand, chronic symptoms are common in conditions such as rheumatoid arthritis, osteoarthritis and COPD that require long term treatment and management plan, regular monitoring to minimize disease progression and control patients’ symptoms and their negative impacts on patients’ life which makes the condition even worse. In very severe cases, surgical intervention may be applied.

Literature review suggests that “symptoms” of patient with COPD and its relationship with other COPD outcomes have not been fully understood [8-12]. Therefore, the present study aimed to explore and examine the role of duration of symptoms in diagnosing and managing patients with COPD and its link with other prognostic indicators [13,14].

Furthermore, COPD guidelines classify severity with FEV1 alone, though impairment correlates poorly with symptoms and disability. Previous study and the more recent BOD scores showing a 4 year and 10 year mortality and found that lower BODE and BOD scores survived longer than the worst quartile [14,15]. The BODE index is now considered useful in assessing patients progression and the present study also investigated the relationship of BODE index with duration of symptoms in patients with COPD.

This is a retrospective and prospective study carried out in Northeast of England. The patients were recruited and followed up between September 1999 and December 2002 and 2007-2008, respectively. The data were collected from patients attending Chest Clinics in general practice in Sunderland who were suspected to have COPD according to GOLD criteria.

Spirometry was carried out to confirm the diagnosis. The spirometry was done according to BTS guidelines [16]. Patients were classified as COPD if the FEV1/FVC ratio was less the 0.70. Those who did not meet the criteria but have some symptoms were classified as non COPD (control group). Other measurement include demographics, present symptoms, duration of symptoms; smoking history (pack-years), hand grip strength using hand dynamometer, co-morbidities (using Charlson Index), dyspnoea status using Medical Research Council Dyspnoea. Also, Pre- and post-bronchodilator spirometric data were obtained. All-cause mortality data for the cohort was collected from the UK Registrar General’s mortality returns to December 2010 giving a median follow up period of 10 years.

To identify the duration of symptoms in patients with COPD, the question asked was “For how many years you have symptoms of your breathlessness/lung problem including cough (with or without phlegm), shortness of breath, wheezing or any other complaint?”

The total number of years was recorded in a Patient Report Form. The duration of symptoms at baseline (1999-2002 cohorts) were determined by subtracting number of years when the patient was first seen (between 1999-2002).

The sample size calculation was estimated based on previous data as well as the available database of patients who fulfil the inclusion criteria for this study.

Data for continuous variables are presented as mean ± standard deviation or number (%) The normality of the datasets was checked via the Kolmogorov-Smirnov test. Baseline differences between COPD and Non COPD were analysed. For continuous variables, the Mann- Whitney U test and student t-test was employed for non-parametric and parametric data respectively. Chi-square was used for comparison of nominal variables. Data are presented as mean ± SD unless otherwise stated.

Table 1: Baseline demographics of COPD and controls in the study.

Figure 1 indicates that there are subjects in non COPD group control group with range of symptoms indicating a group of people who are at risk of developing COPD (Stage I of GOLD). In addition, there are patients who were diagnosed to have COPD (GOLD guidelines) but with no clinical symptoms of COPD what so ever (Tables 2 and 3).

Correlations of duration of symptoms with COPD measurements at baseline

The correlations of symptoms durations with other COPD markers are presented in Tables 2 and 3 at baseline and on follow up respectively. The Table 2 shows that age, pack year, MRC and FEV1% predicted were significantly associated with duration of symptoms at baseline. Age and MRC are positively correlated with duration of symptoms in years whereas pack years and FEV1% predicted were negatively correlated.

At follow up (2007-2008) few additional measurements were done in addition to the baseline measurements including exercise testing (to calculate BODE Scores) and hand grip strength. The findings demonstrate that the relationship of symptoms duration was consistent with BODE and FEV1% predicted whereas as seen at baseline correlations; age, pack year history and MRC were no longer associated with duration of symptoms. Additionally two new measurements that were carried out on follow up visits only, i.e., BODE and hand grip strength were also correlated significantly with duration of symptoms (Figure 2).

Table 2:Â Â Correlations of duration of symptoms with COPD measurements at baseline.

Table 3: Correlations of duration of symptoms with COPD measurements on follow-up. 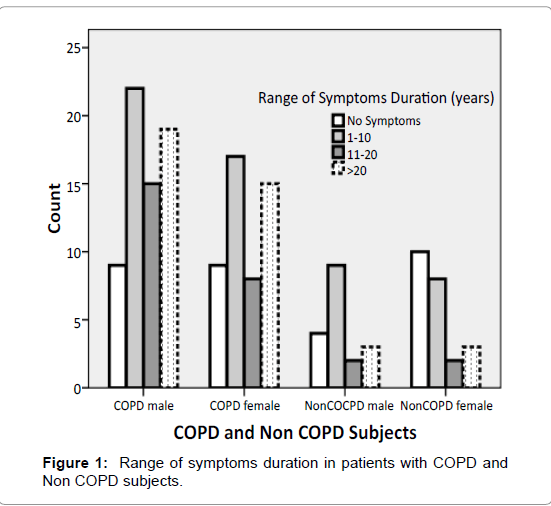 Figure 1: Range of symptoms duration in patients with COPD and Non COPD subjects. 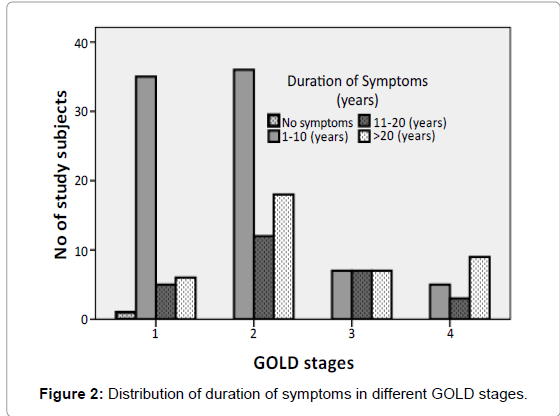 Figure 2: Distribution of duration of symptoms in different GOLD stages.

The new Global Initiative for Chronic Obstructive Lung Disease update has moved the principles of treatment in stable COPD patient forward by including the concepts of symptom [17]. This study highlight the importance of determining the duration of symptoms in patients with COPD as it may provide clinically useful information about disease development, progression and outcomes. It also suggests that the duration of symptoms COPD Patients would be a potential marker that can be utilized to understand the disease. This might improve clinical management.

Another important finding is the relationship between symptoms duration with other prognostic and physiological indicators of COPD such body mass index, MRC scores and BODE index [20].

There are some limitations in this study. As duration of symptoms have not been studied in relation to COPD outcomes, there is no standard method and/or tool for accurate measure of duration of symptoms and therefore there is a strong chances of bias as consider the age group for COPD cohort, patient may not be able to remind and recall their onset of symptoms accurately. However, the author tried best to minimize chances of bias by asking patients about the duration of symptoms on two different occasions (one year apart) and there was no difference found in patient’s response with respect to their recall about the history of onset of their symptoms. Second limitation is the data about the handgrip strength and BODE which was measured once, only on follow ups (between 2007-2008). The BODE was not considered as a part of measurement at baseline as it was published in 2004. The addition of handgrip in follow-up visit was to evaluate if these patient have any disability after 7-8 years as handgrip strength is known to be a predictor of disability in patients with long standing disease. Furthermore, more follow up studies are needed in order to make any firm conclusion regarding duration of symptoms and its importance and utilisation in identifying and assessing these patients.

Further researches will be needed to explore the under-studied and under-estimated use of duration of symptoms in patients with COPD. There is also a need of developing a structured and validated tool to get this information accurately irrespective of spirometric confirmation in these patients that potentially play a critical role in managing disease in these patients.

These findings indicate the possible role of considering duration of symptoms as a useful marker of disease progression and its relationship with other disease outcomes in chronic obstructive pulmonary disease patients.