Copyright: © 2014 Janssen S, et al. This is an open-access article distributed under the terms of the Creative Commons Attribution License, which permits unrestricted use, distribution, and reproduction in any medium, provided the original author and source are credited.

Background: To evaluate local control and cosmetic outcome in patients with cancer in the nasal cavity/vestibule treated with intensity-modulated radiotherapy (IMRT).

Results: Mean/median follow-up (FU) was 30/22 months (range 17-62). Two patients suffered from a local relapse. As a salvage therapy an ablatio nasi was carried out in curative intention in both patients. Thereafter no failure was reported. Local control rate, ultimate local control and overall survival after 2 years were 87%, 100% and 100%, respectively. None of the patients developed grade II or higher late sequels. Cosmetic outcome after RT was very satisfying so far.

Conclusion: IMRT for nasal tumors is effective and well tolerated. Radical surgical procedures can be saved for curative salvage treatment.

Tumors of the nasal cavity or of the nasal vestibule are rare [1]. Optimal treatment depends on tumor size, tumor expansion and nodal status and includes definitive or postoperative radiotherapy, or surgery alone. Surgical removal often implies complex reconstruction which may end in disfiguring results and consecutively essential impairment of quality of life. Radiation therapy (RT) can be carried out as external beam or brachytherapy, with good local control rates of 67-92% after 5 years [2-6].

The goal of the present study was to show effectiveness of IMRT in a single center series of a homogeneous patient collective with nasal tumors in terms of local control and cosmetic outcome.

From 06/2008 to 11/2012 15 consecutive patients presenting with histologically proven squamous cell cancer (SCC, n=13) or adenocarcinoma (n=2) were treated in our institution with IMRT either postoperatively after tumor excision (n=8) or as definitive treatment (n=7).

Patient and treatment parameters are summarized in Table 1. One patient had ipsilateral lymph node metastases (N1). In this case a neck dissection was carried out prior to IMRT.

The dose was normalized to the mean dose in planning target volume (PTV) 1. For intensity optimization, the prescribed dose encompassed at least 95% of the PTV. Simultaneously integrated boost (SIB) was used delivering two-three different dose levels in the same treatment session.

Regular FU visits were carried out in our joint clinic at the Department of Otorhinolaryngology, Head and Neck Surgery. Institutional standards for patient assessment included physical examination approximately every 2 months in the first year of follow-up, every three months in the second to third year and every 6 months in the fourth to fifth year. Last FU and grading of toxicity (CTCAE grading system) was performed personally or by phone calling (SJ or GS in 08-09/13).

Regular FU visits were carried out in our joint clinic at the Department of Otorhinolaryngology, Head and Neck Surgery. Institutional standards for patient assessment included physical examination approximately every 2 months in the first year of follow-up, every three months in the second to third year and every 6 months in the fourth to fifth year. Last FU and grading of toxicity (CTCAE grading system) was performed personally or by phone calling (SJ or GS in 08-09/13).

Systemic therapy preferably consisted of cisplatin (40 mg/m2 weekly) and was switched to cetuximab in case of cisplatin related adverse effects (cetuximab loading dose: 400 mg/m2 followed by weekly applications of 250 mg/m2 referring to Bonner et al. [13]). For patients with contraindications against cisplatin, cetuximab was favored primarily. The indication for systemic therapy was based on tumor stage, resection status, age and Karnofsky performance score. 8 patients presenting with T4 tumors, N1 or R1 resection received systemic therapy. Cisplatin was started in 6 patients, a switch to cetuximab was carried out in four patients after 2 (n=3) and 4 (n=1) courses due to tinnitus (n=3) or rising levels of creatinine (n=1). In two patients with contraindications against cisplatin, cetuximab was preferred as first choice.

Mean/median FU was 30/22 months (range 17-62). Median local control, ultimate local control and overall survival after 2 years was 87% (Figure 1), 100% and 100%, respectively. Two patients developed a loco-regional relapse after 6 and 10 months, respectively. One of those patients was treated with definitive RT; one had an excision before RT. Ablatio nasi was carried out in both cases as successful salvage therapy revealing no recurrence up to now 7 and 26 months later, respectively. 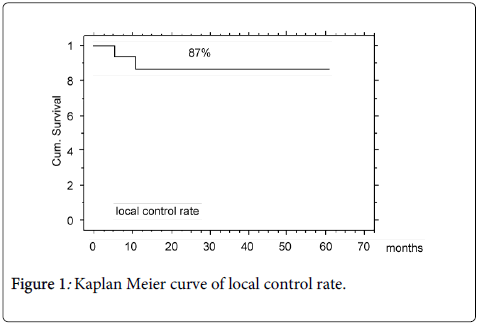 No grade II or higher late sequels were seen during the FU time so far. 12/13 organ preserved tumor free patients suffered from a mild to moderate dryness of the nasal mucosa which was tolerable under symptomatic therapy (Table 3). One patient described a repetitive grade 2 epistaxis, one patient a grade 1 epistaxis. In consequence to the low doses to the lacrimal glands and lenses mentioned in the methods section no severe late adverse effect concerning the lacrimal glands or vision is expected. No nasolacrimal stenosis occurred in any patient.

At the time of last visit each patient was asked to evaluate the cosmetic results of RT using a scale from 1-5 in which 1 would stand for no satisfaction with respect to cosmetic outcome and 5 for high satisfaction with the cosmetic outcome comparable with status before initial diagnosis and treatment. Patients rated cosmetic outcome either as excellent (grade 5, 9/13) or as good (grade 4, 4/13). Table 2 summarizes the results for each patient. In Figures 2-7 exemplary photographs demonstrate objective outcome related to the isodose plans of patients who underwent definitive IMRT. 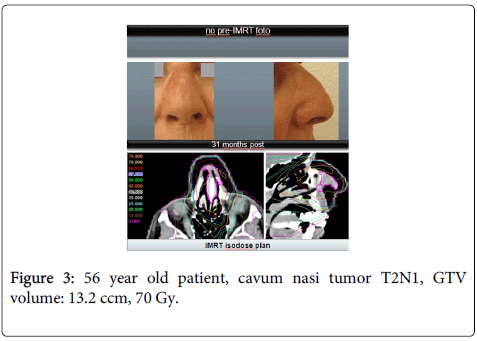 We evaluated clinical outcome and early cosmetic results in a patient group presenting with exclusively nasal tumors treated with IMRT.

In historic series on cohorts treating nasal vestibule tumors with conventional RT or brachytherapy, local control and overall survival rates range from 67% to 92% and 50% to 90%, respectively [2,4,6,14]. The largest series of the DAHANCA study group including 174 patients with nasal vestibule cancer reports a local control rate and an overall survival rate of 67% and 50% at 5 years, respectively [14] (Table 3). In the latter series RT was delivered in opposed lateral fields (KV or MV) or with an anterior electron field +/- brachytherapy boost. Doses range from 54 Gy in 3 Gy single doses to 62-69 Gy in 2 Gy or 2.5 Gy doses [2,4,14]. Langendijk et al. observed rhinorrhoe in 45%, nasal dryness in 39% and epistaxis in 15% of the patients as late toxicity (4). Radiation induced necrosis of the skin was seen in 3 patients. Wallace et al. showed severe late term complications requiring hospitalization and/or surgical intervention in 3 out of 8 postoperatively treated patients. 21% of patients treated with RT only experienced complications which resolved without intervention [2].

Table 3: Summary of studies on conventionally treated patients with nasal cancer published in the IMRT era (not treated with IMRT). BT: Brachytherapy; n.a.: not assessed

IMRT is effective to deliver high doses to target volumes while limiting the dose to adjacent critical structures [12]. We found 7 other single center retrospective studies reporting comparable local control (49-87%) and overall survival data of 45-100% at 2-5 years with low rate of toxicity in patients with sinunasal cancer [7-12,15]. Most IMRT series did not observe any grade 3 visual impairment [8-11]. In contrast to the above mentioned series with conventional RT techniques, those IMRT series included mostly paranasal cavity tumors with different histologies ranging from SCC to esthesioneuroblastoma, adenoidcystic carcinoma and sarcomas. Only a small number of patients with nasal cavity/nasal vestibule tumors were included (Table 4). No published IMRT series evaluating patients with nasal cancer exclusively could be found.

Table 4: Summary of series including all sinunasal tumor sites treated with IMRT, no separate analysis of outcome in patients with nasal tumors, n.a. = not assessed.

Furthermore most of the patients were treated postoperatively. Definitive treatment was carried out in only 9% - 21% in the collectives of Wiegner, Duprez and Madani, respectively while other reports assessed series with only postoperatively treated patients [9-11].

In contrast we had half the cases treated with definitive IMRT. Our results of local control and overall survival are comparable with the large series of conventional treated patients as well as the heterogeneous group treated with IMRT. For our small sample size, disease control was identical for postoperative and definitive IMRT. Cosmetic outcomes were not evaluated in any of the other IMRT studies. Wallace et al. treating nasal vestibule cancer patients with conventional RT only report of “poor” cosmetic results in 6 patients and “good” cosmetic results in 2 patients treated with surgery and RT [2]. Levendag et al. evaluated cosmetic outcome consequently in patients with early-stage nasal vestibule cancer treated with brachytherapy. They scored cosmetic results using a 3 point scale. 65% showed good or excellent objective results judged by an external panel [6]. We used a five point scale in order to further differentiate outcome. Furthermore, we did not assemble an external panel to evaluate cosmetic outcome; cosmetic results as presenting at last visit of the patients treated with 70Gy are shown in Figure 2. Altogether cosmetic outcome is very satisfying with only grade 4 and 5 in self-assessment standing for good and excellent outcomes.

Even our study collective is small and the FU is short, to our knowledge this is the first study evaluating cosmetic outcomes in patients with nasal tumors treated with IMRT.

SIB-IMRT in patients presenting with nasal cancer is effective in terms of local control and overall survival either postoperatively after tumor excision or as definitive organ sparing IMRT. Early cosmetic outcomes were subjectively as well as objectively very satisfying. Ablatio nasi can be saved for curative salvage therapy.