+44-1467840001
Influence of Diabetes and Hemodialysis against Nerve Conduction Studies

Influence of Diabetes and Hemodialysis against Nerve Conduction Studies

Background: Diabetic peripheral neuropathy (DPN) has been prevalent and discussed, and nerve conduction studies (NCS) has been continued. We have checked NCS using recently introduced useful DPN-Check device.
Subjects and Methods: The subjects were 66 patients (pts) classified into 4 groups according to existence of diabetes mellitus (DM) and hemodialysis (HD); Group1: DM (+), HD (+) in 15 pts, group 2: DM (-), HD (+) in 15 pts, group 3: DM (+), HD (-) in 20 pts, group 4: 16 healthy controls. Methods included measurements of sural nerve conduction velocity (SNCV) and sural nerve action potential (SNAP) using HDN-1000.
Results: Average age in each group was 64.4 years to 72.6 years. SNCV value of 4 group in average was 37.1 m/sec, 46.3 m/sec, 49.3 m/sec, 53.2 m/sec, respectively, and value of group 1 was significantly lower than those of group 2,3,4 (p<0.01). Similarly, average SNAP was 4.1 μV, 8.7 μV, 8.0 μV, 21.6 μV, respectively, and group 1,2,3 were significantly lower than group 4 (p<0.01). There was significant correlation between SNCV and SNAP in all subjects (p<0.01). Significant correlations were shown between DM duration and SNCV, and DM duration and SNAP (p<0.01).
Discussion and Conclusion: SNCV and SNAP were measured successfully and easily by HDN-1000, indicating clinical availability. Obtained data suggested that 1) SNCV is not significantly decreased due to only uremic neuropathy, 2) SNCV is significantly decreased in patients with both HD and DM, 3) SNAP is significantly decreased in patents with DM for years and 4) SNAP would be remarkably decreased when HD is in addition to DM. These results would become the basal data of future NCS for DM and HD.

Diabetes mellitus (DM) has been increasing worldwide. The prevalence of the diabetics is 8.8% in 2015, and it will rise to 10.4% in 2040 [1,2]. Neuropathy is one of common and important microangiopathic complication, and observed in high percentage of diabetic patients [3,4].Historically speaking, diabetic peripheral neuropathy (DPN) has been widely known and prevalent. In order to clarify the influence of hyperglycemia on the progression of diabetic neuropathy, nerve conduction velocity was formerly measured at median, peroneal and tibial motor nerves, supporting the hypothesis of a metabolic component to diabetic neuropathy [5,6].DPN has been actually diagnosed based on medical history, physical exam and some simple tests [6,7]. While this testing is easy to perform, it is limited in terms of its accuracy. Nerve conduction studies (NCS) has been introduced, but its complexity and cost have excluded their use in a routine evaluation [8,9].Recently, advances in technology have enabled us to perform NCS easily. By sural nerve in calf and ankle, simple and useful DPN-Check device showed accurate NCS for the assessment of DPN [10,11].Authors have reported lots of studies for years concerning diabetes including low carbohydrate diet (LCD), lipid metabolism, exercise, and ketone bodies [12-15]. In current study, we investigated NCS in patients with DM and/or with chronic hemodialysis (HD).

We enrolled 66 subjects in current study, including 50 patients and 16 normal healthy subjects. Subjects were categorized into 4 groups according to the existence of DM and/or on hemodialysis (HD). The groups were as follows. Group 1 includes 15 diabetic patients with HD, group 2 includes 15 patients with HD and without DM, group 3 includes 20 diabetic patients without HD and group 4 includes 16 normal subjects which age were matched to that of group 3 (Table 1). Methods include the measurement of sural nerve conduction velocity (SNCV) and sural nerve action potential (SNAP) in the lower calf and ankle. We used recently introduced simple and precise medical device, HDN-1000 which was developed by NeuroMetrics Inc., USA with registered No. 226AABZI00091000.This device has been based on validated technologies [16,17], and has lots of research results with high sensitivity and reproducibility, and clinically simple and useful measurements [18,19].The procedure on the examination is simple and performed within a few minutes. The small device gives electrical stimulation on the back side of the ankle, and can measure with a biosensor installed 9.22 cm ahead of the stimulation probe.The standard normal range has been adequate from various research, which were more than 48 m/sec for the SNCV, and more than 6 μV for SNAP [8,11,20].

Table 1: Classification and general data of the subjects.

In current study, obtained data was shown as the mean ± standard deviation (SD) and also median, quartile of 25% and 75% in biomarkers. For statistical analyses, correlation coefficients were calculated using Pearson or Spearman test of the Microsoft Excel analytical tool, which is Four steps Excel Statistics 4th edition [21]. Intergroup comparisons were made using the Wilcoxon rank sum test or the Bonferroni multiple comparisons (Lambert method). A significance level of less than 5% obtained using a two-tailed test was considered to be statistically significant.

Correlation between SNCV and SNAP

Correlation between SNCV and SNAP was shown in Figure 1. This includes all data from 4 groups. Both revealed significant correlation and data from each group showed close distribution, respectively. 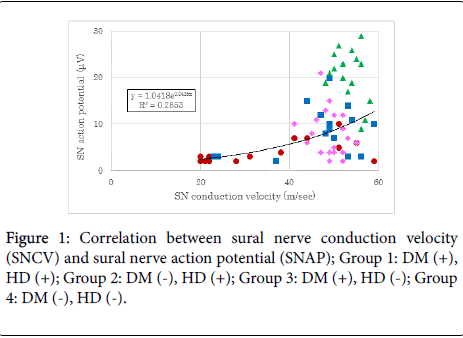 Correlation between DM duration and NCS

Correlation between HD duration and NCS

Correlation between HD duration and SNCV or SNAP was shown in Figure 3a and 3b. There was no significant correlation in each analysis.

The relationship between the presence of neuropathy were assessed by NCS and future mortality in diabetic patients [27,28]. Mortality were increased when a patient had neuropathic history and higher initial A1C, in which neuropathic history nearly doubled the mortality risk [hazard ratio of 1.95] whereas an A1C of >8.5% had 1.64 hazard ratio [27]. Adjusted for other common risk factors, the hazard from neuropathy for all-cause mortality was 4.44 and for diabetes-related mortality were 11.82. Consequently, neuropathy increased the risk of diabetes-related mortality more than 10-fold when corrected for other risk factors [28].

Sural nerve is one of a distal sensory nerve. It innervates at lateral and posterior third of leg and lateral aspect of foot and heel and lateral portion of the ankle. The characteristic point is that sural nerve is sensitive to DPN, which is recognized as a biomarker of DPN [20,29].

In recent years, a new device of HDN-1000 was released, which can measure the nerve conduction velocity of the sural nerve easily. As to the results of SNCV and SNAP by HDN-1000, both showed nearly equivalent numerical values as compared with the conventional NCT, and their usefulness has been evaluated [11]. It included lots of research results based on validated technologies [8,16,17,30].

Clinical data were summarized as follows: 1) sural nerve conduction is a standard, quantitative biomarker of DPN [8], 2) DPN was detected to be with high diagnostic sensitivity [7], 3) it showed abnormalities indicative of subclinical DPN [18], it correlated to morphological severity of DPN [3,7,30], 4) detectable sural response was suggestive of low foot ulcer risk [31] and 5) predictive of concurrent micro vascular complications [32].

In clinical application of HDN-1000, it was convenient for repeated peripheral nerve function measurements, as well as reduced invasiveness and stress to the patient [19].

As to diabetic neuropathy, it has been known that carpal tunnel syndrome (CTS) frequently occurs in diabetic patients [33,34]. Its characteristics are that many cases are pointed out as median neuropathy (MN) at the wrist in asymptomatic NCS. MN is frequently observed in early stages when DPN was not observed, then it may be regarded as an early lesion of DPN [35].

There are remarkable decrease of SNAP in group 1 and 3 compared with that of group 4. One of the reasons for decreased SNAP in diabetics would be from decreased intra-epidermal nerve fiber density (IENFD) [36]. IENFD can be observed with a confocal microscope, by a 3 mm diameter punching needle biopsies at 10 cm above the ankle of the lower extremity with fixes and immunostaining. The value of IENFD falls from the early stage of DPN and declines in correlation with the progression of stage [37].

As another report, severe uremic neuropathy (UN) was seen in 16.4% of HD by both the Michigan Neuropathy Score Instrument (MNSI) and the electroneurographic (ENG) lower limbs examination [39]. End-stage renal failure in DM is often associated with severe distal motor and sensory deficits [40]. Peripheral neuropathy in patients with DM and HD may be correlated with hyperkalaemia and nerve dysfunction deterioration [41].

In this study, decreased SNCV and SNAP were shown in patients with diabetes and/or with chronic hemodialysis. The data may suggest the pathophysiological influence of DM and HD for deterioration of neuropathy. These results would become the basal data of future investigation for NCS for DM and HD.

Current study was conducted in compliance with the ethical principles of the Declaration of Helsinki and Japan’s Act on the Protection of Personal Information along with the Ministerial Ordinance on Good Clinical Practice (GCP) for Drug (Ordinance of Ministry of Health and Welfare No. 28 of March 27, 1997). No ethical committee meeting was held. Informed consent was obtained from the subjects.

Copyright: © 2017 Kato Y, et al. This is an open-access article distributed under the terms of the Creative Commons Attribution License, which permits unrestricted use, distribution, and reproduction in any medium, provided the original author and source are credited.