Copyright: © 2015 Umoren EB, et al. This is an open-access article distributed under the terms of the Creative Commons Attribution License, which permits unrestricted use, distribution, and reproduction in any medium, provided the original author and source are credited.

The effect of long term administration of nevirapine (NVP) on serum levels of some liver enzymes in albino Wistar rat was investigated. A group of rats treated with NVP (0.4 mg/kg body weight) for 2 weeks thereafter, two times daily in addition to normal rodent chow for 12 weeks were examined for serum levels of aspartate transaminase, alanine aminotransferase, alkanine phosphatase, gamma glutamyl transferase. The levels of aspartate transaminase (AST), alanine aminotransferase (ALT), alkanine phosphatase (ALP) and gamma glutamyl transferase (GGT) for the NVPtreated group were significantly (p < 0.001) higher as compared to their control(s), respectively. In conclusion, results of the study indicate that long term administration of NVP may be injurious to liver cell integrity, and this might impair liver function in the rat. If this result is applicable to humans, long term administration of NVP could hamper the integrity and function of the liver in individual users.

The antiretroviral (ARV) drug nevirapine (NVP) is a non-nucleoside reverse transcriptase inhibitor (NNRTI) of human immunodeficiency virus – Type 1(HIV-1). NVP binds directly to reverse transcriptase and blocks the RNA-dependent and DNA-dependent polymerase activities by causing a disruption of the enzyme’s catalytic site [1]. Widespread use of highly active antiretroviral therapy (HAART) has led to dramatic reductions in morbidity and mortality among individuals infected with the HIV- 1 [2,3]. It is now clear that long term remission of HIV- 1 disease can be achieved using various combinations of ARV agents, which suppress plasma viral loads to less than the limit of quantification of the most sensitive commercially available assays [4,5]. The clinical and immunological stabilization of HIV disease that is possible thanks to the availability of a broad spectrum of ARV compounds has it caveats in adherence, resistance and toxicity problems [6,7]. NVP like many other ARV agents have side effects and toxicities which affect the gastrointestinal system [8,9]. NVP is extensively biotransformed via cytochrome p450 (oxidative) metabolism to several hydroxylated metabolites [10]. NVP is an inducer of hepatic cytochrome p450 (CYP) metabolic enzymes 3A and 2B6 [10]. These enzymes are features that favor potential production of a toxic intermediate that might cause liver injury [11]. The NNRTIs are the most likely class of ARV agents to cause acute hepatitis. The syndrome of lactic acidosis with hepatic steatosis related to the nucleoside analogue reverse transcriptase inhibitors may occur years after the introduction of combination antiretroviral therapy [12].

Several studies have demonstrated the adverse effect of NVP on humans. Buyse et al. [13] had reported that NVP is usually associated with high serum aminotransferase elevations and that it is a wellestablished cause of acute and clinically apparent liver injury. de Maat et al. [11] had also reported that NVP might cause severe or life threatening liver toxicity, usually emerging in the first six weeks of treatment. van Leth et al. [14] and Stern et al. [15] have documented that following the introduction of HAART as the standard of care of HIV disease, multiple pathogenetic mechanisms have been postulated for the emerging liver damage observed during the course of antiretroviral therapy (ART). Cattlelan et al. [16], Martinez et al. [17], Piliero and Purdy [18] and Sulkowski et al. [19] had respectively reported that a direct or immunemediated hepatic involvement seems to be caused by NNRTIs. Den Brinker et al. [20] had documented that protease inhibitors that involve extensively liver metabolic pathways have a tendency to abnormal liver enzymes in patients. Little however, exist in the literature regarding the effect of NVP administration on liver function.

Clinical studies have not given a consistent definition of NVPassociated liver damage. However, Boehringer [21] had documented that serious liver damage is generally due to levels of serum alanine aminotransferase (ALT) or aspartate transaminase (AST) that are greater than or equal to five times the upper limit of normal (ULN) and also by histological changes in the liver which might affect normal liver functions. NVP-associated hepatotoxicity may affect normal liver function. This instigated this study to examine the possibility of measuring serum levels of some metabolic enzymes normally used as marker of liver function following long term administration of NVP using albino Wistar rats as a model.

Approval for the study was obtained from the Animal Ethical Committee of the College of Medical Sciences. Albino Wistar rats of both sexes weighing between 50-125 g from the start of the experiment were used for this study. They were maintained in the animal facility of the Department of Physiology, University of Calabar, Nigeria, at a temperature of 28 ± 2ºC and 12 h light/dark cycles. The rats were kept singly in improvised plastic metabolic cages with wire net covers. The rats were randomly assigned into two groups (a control and a test (NVP-treated) group). Each group consisted of ten rats. They were all allowed free access to normal rat chow and clean drinking water. The test group received oral administration of NVP (0.4 mg/kg body weight) once daily for 2 weeks thereafter the administration was done two times daily (07:00 h and 18:00 h). The feeding regimes lasted for 12 weeks (90 days) after which the samples were collected for analyses.

Collection of blood samples and measurement of liver enzymes

Venous blood samples were obtained from the jugular vein under thiopentone sodium anesthesia (Rolex Medica, GMBH, Germany), given at 60 mg/kg body weight. The blood samples were collected in the test tubes and allowed to stand for 30 minutes to clot before being centrifuged at 300 x g for 10 minutes. The serum was extracted and stored at 4ºC for subsequent analysis of ALP, ALT, AST and GGT enzyme levels. ALP level was analyzed according to the optimized standard method recommended by the Deutsche Geseiischage fur Klinische Chemic DGKC [22]. Using P-nitrophenyl phosphate as substrate and measuring the phenol liberated by the enzyme. The AST and ALT levels were determined according to the method of [23], using AST and ALT substrate respectively. GGT level was determined according to the method of [24] using GGT as substrate. Enzyme activity was expressed in International Units per liter (IU/L). All analyses were checked for accuracy by concurrent analyses of AMES control sera for ALP, ALT, ASP and GGT.

Calculate the gamma glutamyl transferase activity in the sample using the following factors;

Conversion factor from traditional units (U/1) in SI-units (kat/1):

All results are presented as mean ± standard error of mean. The data were analyzed using the unpaired Student’s t-test and p<0.05 was considered statistically significant.

The effect of long term administration of NVP on the level of serum aspartate aminotransferase is illustrated in Figure 1. The enzyme level in the control and NVP-treated groups were 67.8 ± 0.99 I.U and 98.4 ± 3.71 I.U. respectively. There was a significant increase (p<0.001) in serum AST level in the NVP-treated group as compared with the control. 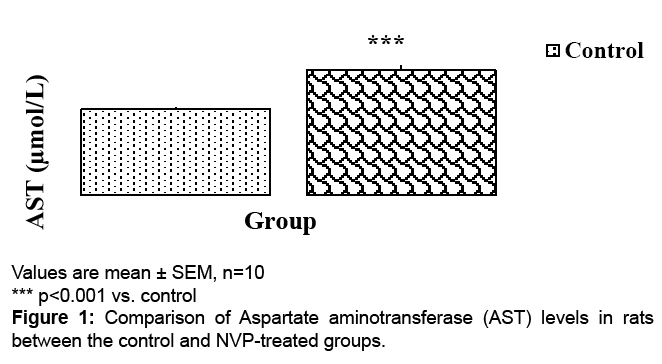 Figure 1: Comparison of Aspartate aminotransferase (AST) levels in rats between the control and NVP-treated groups. 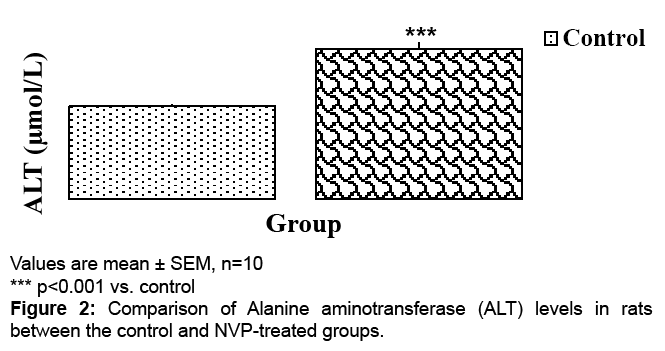 Figure 2: Comparison of Alanine aminotransferase (ALT) levels in rats between the control and NVP-treated groups. 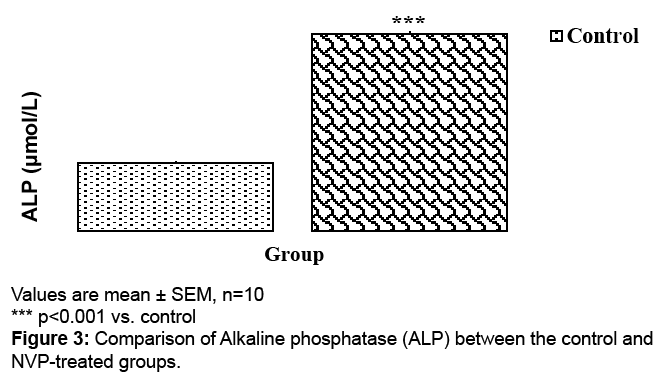 Figure 3: Comparison of Alkaline phosphatase (ALP) between the control and NVP-treated groups. Figure 4: Comparison of gamma glutamyl transfearse (GGT) between the control and NVP-treated groups.

The changes in liver enzyme profile following long term administration of NVP were measured. The levels of ALP, AST, ALT and GGT were elevated in the NVP-treated rats. This indicates liver dysfunction arising from the long term administration of NVP. Although the experimental methods used for the liver enzyme analysis have potential flaws related to product inhibition, they generally give adequate comparative results.

In the assessment of liver damage certain biomarkers of hepatotoxicity are measured and one of such biomarkers are enzyme levels such as AST and ALT because liver damage arising from necrosis or membrane damage normally releases the enzymes into circulation; therefore, measurement of these enzymes in serum gives an indication of the health status of the liver. High levels of AST indicate liver damage, which may be due to viral hepatitis, cardiac infarction and muscle injury. ALT catalyses the conversion of alanine to pyruvate and glutamate, and is released in a similar manner. It is known that an increase in the enzymatic activity of ALT and AST in the serum directly reflects a major permeability or cell rupture, and thus a better parameter for detecting liver injury [25,26]. An increase in AST and ALT, a hepato-specific enzyme that is principally found in the cytoplasm in the rats following administration of a hepatotoxin is attributed to the increased release of enzymes from the damaged liver parenchymal cells [25,27,28].

ALP level usually increases remarkably in disease that impair bile formation and to a lesser extent in hepatocellular diseases. Earlier studies in our laboratory [30] have shown that long term administration of NVP in albino Wistar rats increased total bilirubin, conjugate and unconjugated bilirubin as well as increased levels of cholesterol. Thus, pointing towards hepatotoxicity. This finding is in agreement with earlier reports of elevated levels of bilirubin following NVP based treatments [31,32]. Fatal hepatotoxicity including fulminant and cholestatic hepatitis, hepatic necrosis and hepatic failure have also been reported in patients with NVP treatment [9,16-19,33,34].

The observed increase levels of ALP, ALT, AST and GGT in NVPtreated rats as compared to their controls respectively is in consonance with the works of [17,20,31,32,35-38]. In conclusion, results of the study suggest that long term administration of NVP increases liver enzyme (ALT, AST, ALP and GGT) levels. This might impair liver function in rat. If this result is applicable to humans, long term administration of NVP could hamper the integrity and function of the liver in individual users. Further investigation to determine the exact constituents that is responsible for NVP hepatoxicity effect is recommended.

The financial assistance of Prof. EJ Usua is gratefully acknowledged.