+44-7482-878921
Insect Faunal Succession on Buried Piece of Pork in the State of Punjab (India): A Preliminary Study | OMICS International

Insect Faunal Succession on Buried Piece of Pork in the State of Punjab (India): A Preliminary Study

Copyright: © 2015 Bala M, et al. This is an open-access article distributed under the terms of the Creative Commons Attribution License, which permits unrestricted use, distribution, and reproduction in any medium, provided the original author and source are credited.

Forensic entomology is the study of insects and other arthropods found on a corpse and are used to solve crime especially in medico-legal cases [1,2]. Succession is the act of following in order or sequence. The progressive replacement of one dominant insect species or community by another in an ecosystem until a stable climax community is established while Decomposition is a continuous process which is commonly divided into various stages i.e. fresh, bloated, advanced decay and decay stage. Decomposing corpse is an appealing resource to many species of necrophagous, opportunistic and occasional insects [1,2]. The identification of insects associated with a corpse and their specific biology in the context of a crime scene can provide useful data for the best estimation of death criteria, i.e. PMI estimation. When studying decomposition from an entomological point of view and for the purpose of applying data to human death investigations, the domestic pig Sus scrofa Linnaeus is considered to be the preferred human analogs [3]. While the pattern of arthropod colonization follows a reasonably predictable sequence, the limits of each stage of decomposition will not necessarily coincide with a major change in the faunal community. Therefore, the stages of decomposition were defined by the observable physical changes to the state of the carcass. A pattern of insect succession results as different carrion insects are attracted to the varying biological, chemical and physical changes a carcass undergoes throughout the process of decay. Main objective of present study was to prepare a database of insects associated with buried corpse, which can have potential importance in estimation of Post Mortem interval in case of buried corpse.

The experiment was conducted in the month of September, 2013, in a village Ghawaddi of District Ludhiana (Punjab), India. Ludhiana district falls in central part of Punjab. The climate of district Ludhiana is hot and semi-arid with mainly dry, hot summer and cold winter except during monsoon season when moist air penetrate into the district. The normal annual rainfall of the district is 680 mm. The soil is sandy loam to clayey with normal reaction (pH from 7.8 to 8.5). Long trees of Eucalyptus are main flora. Trunk region of pig (Sus sacrofa) weighing 5 Kg, was used as research model to study insect succession pattern in case of buried piece of pork. Piece of pork was clothed with human clothing i.e. some cotton cloth and was buried in the soil. The grave was dug with the help of shovelst and was large enough to accommodate the piece of pork. Depth of the grave was 30 cm. Since this is a common depth for most of homicide cases involving buried bodies so far most homicide victims are not deeply buried. Grave was covered with wire mesh having a layer of local vegetation over it. The pork was exhumed two times a day (morning and evening time) for collection of insects. The entire piece of pork was lifted out and the insects from it were sampled. Insects present on piece of pork were collected with the help of forceps. The tiny insects like ants, collected with the help of fine brush enriched with alcohol. The collected insects were transferred into the vials having 70% ethanol and were labeled with the date, time, temperature and humidity. All the vials were placed in wooden collection boxes for further identification of insects. The collected insects were identified with the help of Stereozoom (Model No.RI-90-01) microscope and by running the keys based on their morphological characters. The duration of the each decomposition stage varies according to temperature and humidity of area. Ambient air temperature and humidity during the experiment was measured with the help of electronic thermo hygrometer (288-CTH). 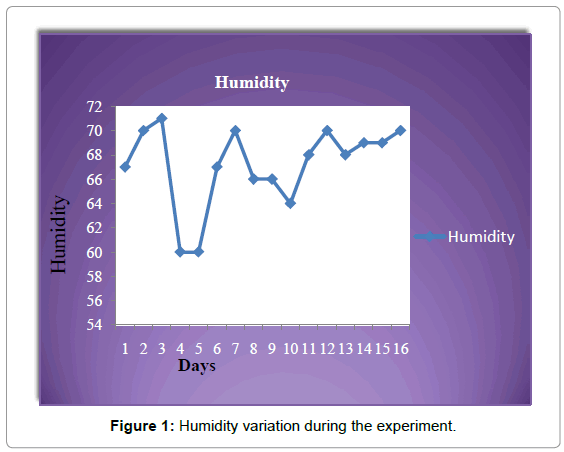 Figure 1: Humidity variation during the experiment. 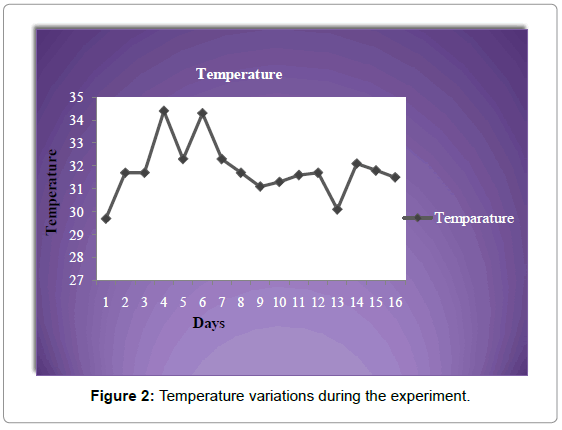 Figure 2: Temperature variations during the experiment.

It begins with the moment of death and continues till the beginning of bloated stage (0-3rd day of experiment). Process of autolysis occurs within the pork that is the breakdown of complex proteins and carbohydrates into simple chemical compounds. No odor is detected during this stage (Figure 3). Figure 3: Stages of decomposition in buried pieces of pork.

The first sign of this stage is the inflation and swelling and putrefaction of pork. This stage is the beginning of decomposition process. It begins from the 4th day and lasts till 8th day of experiment. The inflation caused by gases in the intestine produced due to the action of anaerobic bacteria. Odor of decay is noticed during this stage. Fluid starts seeping from the pork (Figure 3).

This stage was started on 9th day of experiment and continue upto 13th day. During this stage the pork was deflates and most of the parts were relatively dry (Figure 3).

This stage is the last stage of decomposition, starts on 14th day and continued till 16th day. It contains only the dry skin and bones of pork. The end of this stage is difficult to define due to its long duration (Figure 3).

Reed [5] stated that this stage may last upto a point when no carrion fauna remains. Studies have shown that each stage is characterized by particular insect species, the succession of which is depends on chemical and physical properties of remains, rate of decomposition and environmental factors. Payne [4] described faunal succession patterns on newborn carcasses of the domestic pig, Sus sacrofa Linneaus in a hardwood pine community in South Carolina. Six stages of decomposition were observed on pig carcass.

Dipteral flies as well as their immature stages were not observed during any stage of decomposition because the pork was buried at the depth of 30 cm and flies were not able to reach at such depth since grave was tightly covered with the soil and wire mesh. But Pastula and Merritt [6] observed two fly species on buried pork i.e Sarcophaga bullata (Parker) (Diptera: Sarcophagidae) and Hydrotaea sp. (Diptera: Muscidae) which were found colonizing buried carrion after 5 days of burial at depth 30 cm. 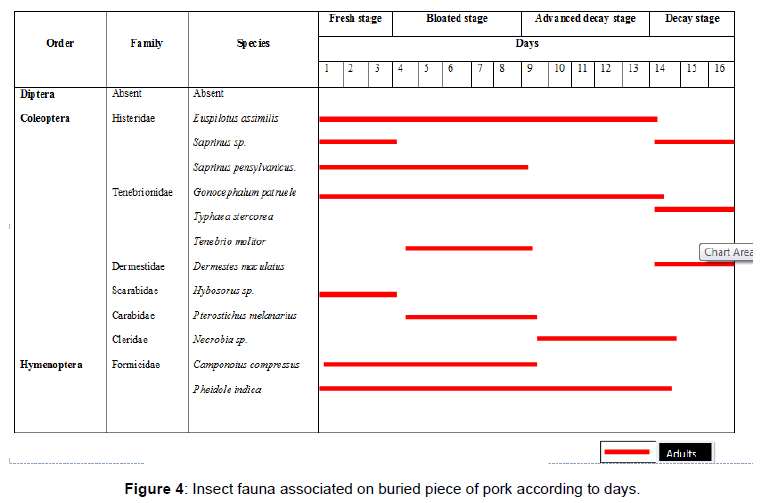 Figure 4: Insect fauna associated on buried piece of pork according to days. 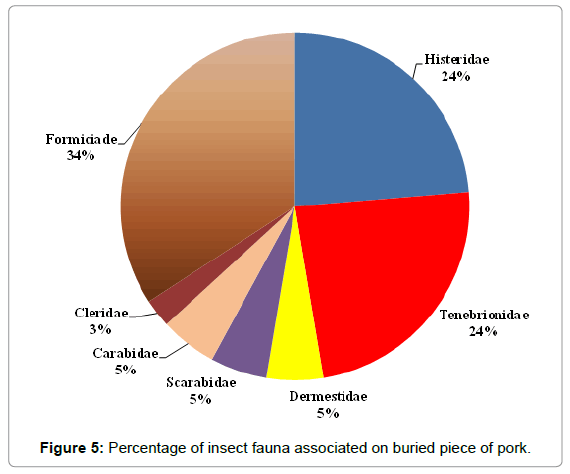