Intraductal Tubulopapillary Neoplasm: An Unusual Presentation of a Rare Tumor

Copyright: © 2016 Gabriel E, et al. This is an open-access article distributed under the terms of the Creative Commons Attribution License, which permits unrestricted use, distribution, and reproduction in any medium, provided the original author and source are credited

Intraductal tubulopapillary neoplasm (ITPN) of the pancreas is a relatively new entity with approximately 60 reported cases in the literature. While distinct from mucinous neoplasms of the pancreas, its clinical presentation can be quite varied, thus making this a challenging diagnosis. However, the histopathological characteristics of ITPN are better characterized, lending aid in establishing the diagnosis. In this brief case report, we present an as yet undescribed and unusual presentation of ITPN associated with intratumoral hemorrhage and a high serum lipase level, which normalized following resection.

Intraductal tubulopapillary neoplasm (ITPN) of the pancreas is a rare tumor with approximately 60 cases described in the literature, accounting for less than 1% of pancreatic neoplasms [1,2]. The clinical presentation is quite variable, with most patients either having abdominal pain or being asymptomatic [1]. ITPNs were originally characterized as solid tumors forming tubulopapillae without containing mucin and frequently associated with necrosis [3]. In general, ITPNs are immunohistochemically positive for cytokeratin and MUC1 and negative for trypsin, β-catenin and MUC2 and MUC5AC [4,5]. Because of its rarity and often incidental presentation, the incidence and oncologic outcomes of ITPN are unknown, although in general these are thought to have better prognosis than intraductal papillary mucinous neoplasms (IPMNs) [2,6]. A few unique presentations have been reported in the literature regarding ITPNs, including association with osseous and cartilaginous metaplasia, heavy calcification and pancreatic multifocality [1,7,8]. In this brief case report, we describe an unusual presentation of this already rare diagnosis.

The patient was a 51-year-old man with no significant past medical history and taking no medications. He had no prior episodes of pancreatitis and consumed only occasional alcohol. He initially presented to an outside hospital complaining of low abdominal pain and bloating. Upon admission, a contrasted computerized tomography (CT) scan abdomen and pelvis was performed showing a 3.8 cm hemorrhagic lesion in the tail of the pancreas (Figure 1A). An abdominal magnetic resonance imaging (MRI) scan was performed showing that the mass was hypoechoic to the normal pancreatic parenchyma on contrasted T1 weighted images (Figure 1B). Layering within the mass was appreciated on both imaging modalities consistent with hemorrhage. 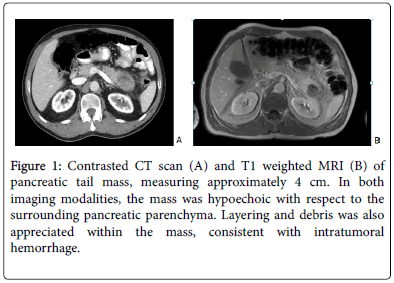 Figure 1: Contrasted CT scan (A) and T1 weighted MRI (B) of pancreatic tail mass, measuring approximately 4 cm. In both imaging modalities, the mass was hypoechoic with respect to the surrounding pancreatic parenchyma. Layering and debris was also appreciated within the mass, consistent with intratumoral hemorrhage.

He was referred to our institution, and an esophagogastroduodenoscopy with endoscopic ultrasound (EGD/ EUS) was performed showing a unilocular 4.3 X 3.4 cm cystic mass with layering debris. Aspiration of the cyst was performed, which revealed clear fluid without the presence of mucin. The cyst carcinoembryonic antigen (CEA) level was 2.6 ng/ml, and the cyst amylase level was 79 IU/L. The diagnosis based on the cyst cytology favored an acinic or acinar cell tumor, as the sample contained cells with fine granular chromatin and occasional nucleoli that stained positive for cytokeratin but negative for trypsin. Also included in the differential diagnosis were pseudopapillary tumor and islet cell tumor. A serum lipase was obtained, which was markedly elevated to >1,300 U/L (normal range 23-300 U/L), consistent with the leading diagnosis of acinic cell tumor as these are often associated with increased serum lipase.

To establish the definitive diagnosis and to address his persistent symptoms, he underwent a laparoscopic distal pancreatectomy and splenectomy. His intraoperative and post-operative courses were unremarkable, and he was discharged on post-operative day number 4. His serum lipase decreased to 300 U/L.

Final pathology was consistent with a 4.2 cm ITPN with high-grade dysplasia with no definitive invasion concerning for associated adenocarcinoma. The margins were negative, and 0/16 lymph nodes were involved. There was no associated mucin. The presence of organized clot was noted. Figure 2 shows the hematoxylin and eosin (H&E) staining of the specimen, depicting cuboidal high-grade dysplastic cells proliferating in a tubulopapillary growth pattern, characteristic of ITPN.

Figure 2: Low power (A) and high power (B) field of hematoxylin and eosin (H&E) staining of the specimen. The uniform cuboidal cells with high grade dysplasia can be noted (B) as well as the tubulopapillary growth pattern (A), which are characteristic of ITPN.

Cells were positive for cytokeratin and negative for trypsin. The pathology was reviewed at an outside institution as well, with expertise in complex pancreatic pathology. Consensus was made that based on the existing histopathology and growth pattern that the diagnosis was ITPN, and further staining was therefore not performed. The final pathology was reviewed at our institutional multidisciplinary conference, and as the patient did not have any evidence of carcinoma, no additional therapy was recommended.

ITPN is a rare and challenging clinical diagnosis to make, as highlighted by this case presentation. Recent comprehensive reviews have described the clinical and pathological characteristics of ITPN [1,2] From the limited data from case reports and small case series, ITPN occurs in the 6th to 7th decade of life with an even gender distribution. In contrast to our patient, tumors are most frequently found in the head of the pancreas, followed by the body and then the tail. Multifocal ITPN has also been reported [1].

Histopathology often assists with the diagnosis of ITPN, as this entity may often be confused with IPMN. Although ITPN are typically positive for cytokeratin and MUC1 and negative for trypsin, β-catenin and MUC2 and MUC5AC, overlap among these markers between ITPN and IPMN have been reported, therefore further increasing the challenge of diagnosis. For example, one group recently reported a case of a MUC5AC positive IPMN, which was initially thought to be an ITPN based on the tubulopapillae architecture [9].

Diagnosis based on cytology obtained through fine needle aspiration (FNA) is very difficult. Similar to our case, prior cases reports have proposed similar differential diagnoses, including acinic cell tumor and pancreatic endocrine tumor, based on cytology characteristics which have some overlap with ITPN [10]. Therefore, we favor surgical resection in order to establish the definitive diagnosis as well as ameliorate symptoms related to the mass, which often consist of persistent abdominal pain as in this case.

Regarding long-term oncologic outcomes, the follow-up of patients with ITPN reported in the literature is short, and the few numbers of patients limit the ability to draw conclusions on the malignant potential of these tumors. Of the reported cases, the minority have had recurrent or metastatic disease and even fewer have been associated with synchronous invasive carcinoma [1,11]. A recent case report has attempted to highlight an association with ITPN and familial pancreatic cancer, although this was based on a single patient [12]. Continued follow-up of these patients and increased reporting and awareness of this rare diagnosis may help better characterize the natural biology of this tumor and its subsequent long-term outcomes.

What is particularly unique about our case was the presence of intratumoral hemorrhage and the elevated serum lipase. Prior reports to not list these findings as characteristics common to ITPN. Thus, this is the first case presentation where ITPN was associated with these findings. The intratumoral hemorrhage can be seen clearly in the preoperative imaging (Figure 1) and was noted on final pathology. A potential reason as to why this occurred may be related to the larger size of the tumor, which was over 4 cm. Second, the elevated serum lipase was striking and consistent with the suspected initial diagnosis of an acinar cell tumor. No previous reports have mentioned an elevated serum lipase level in the setting of ITPN, and so such a presentation should be noted. Further, removal of the ITPN resulted in a normalized serum lipase level. As overlap between ITPN and other pancreatic neoplasia including endocrine tumors has been reported, this finding may reflect a continuum of tubular/ductal pancreatic disease, which certainly warrants further investigation in order to better classify these entities. In conclusion, we have presented a unique case of ITPN involving intratumoral hemorrhage and hyperlipasemia.