+44-1764910199
Investigation of Incidence Rate, Demographics, and Clinical Manifestations of Coccidioidomycosis in a West Texas Regional Referral Medical Center, From January 2004 to December 2012

Investigation of Incidence Rate, Demographics, and Clinical Manifestations of Coccidioidomycosis in a West Texas Regional Referral Medical Center, From January 2004 to December 2012

Copyright: © 2015 Li W, et al. This is an open-access article distributed under the terms of the Creative Commons Attribution License, which permits unrestricted use, distribution, and reproduction in any medium, provided the original author and source are credited.

Objectives: Coccidioidomycosis is an endemic disease causing significant mortality and morbidityin Southwestern United States. Our group recognized recurring and increasing cases of Coccidioidomycosis in a west Texas regional referral medical center between 2004 and 2012; therefore, we endeavored to identify key characteristics of this endemic West Texas disease. Methods: This retrospective chart review contains all pertinent hospitalizations identified by searching the medical center laboratory records for the keywords of “Fungus” or “coccidioides” on immunoglobulin assays and fungal cultures. The positive laboratory results from January 2004 through December 2012 derive the basis for identification of the patient medical records reviewed. Data extracted from medical records, using a standardized form, includes the multivariates of age, gender, ethnicity, comorbid illness, and body system infected (respiratory, musculoskeletal, gastrointestinal, neurological etc). Subsequently data correlation analyses show the incidence trend and student t test assesses the mean of patient ages. Chi-square test reveals results for other data elements. Results: During a five-year period, laboratory confirmed cases of Coccidioidomycosis have steadily risen to a 70.3% increase in 2012 compared to 2008. On average, the age of male and female patients is 52.08 (± 15.81) and 55.86 (± 14.51) years old, respectively. Identifiable risk factors include male gender, African-American race and the comorbidity of malignancy. Conclusion: The increasing incidence of Coccidioidomycosis cases at a regional referral medical center of west Texas indicates a pressing need for further epidemiological study throughout this large geographic endemic region and perhaps classification of Coccidioidomycosis as “reportable” in the state of Texas.

The disease termed Coccidioidomycosis results from infection by a dimorphic fungus, most commonly either Coccidioides immitis or Coccidioides posadasii. The Coccidioides are soil-dwelling organisms and when disturbed become airborne, thereby gaining access to a host for infection. Geographic differences occur among the two most

common infecting species with Coccidioides immitis mainly identified in the central valley of California and Coccidioides posadasii in the other endemic areas [1]. The clinical manifestations, however, do not differ between the two species and overlap does exist in the general geographic distributions of the causative organisms [2]. Clinical manifestations of Coccidioidomycosis vary depending on both the size or burden of disease, as well as the immune status of the host. More than 60% of patients remain asymptomatic after infection [3]. Active disease involves almost any organ system but disseminated infection occurs in less than one percent of patients. As expected with an organism associated with airborne spread, pulmonary infection occurs most often followed by musculoskeletal in 10-50% of reported cases [2,4]. Underlying co-morbid disease, particularly immune compromise and including prescribed immune suppressing medications, more often results in Coccidioides fungemia [5]. Finally, epidemiologic data from other studies identify African-American and Hispanic populations experience disproportionately higher frequency of disease compared to other racial or ethnic groups [6,7] Endemic Coccidioidomycosis occurs in the arid southwestern United States. More 3 specifically a higher prevalence of disease exists in central and southern California, southern Arizona, southwestern Texas, as well as areas of Nevada, New Mexico, and Utah [8]. Consequently much of the research regarding Coccidioidomycosis has been performed in Arizona and California. Hector et. al. report a similar dramatic increase of Coccidioidomycosis cases in Arizona and California from 2001 to 2006, with a 97.8% and 91.1% increase in incidence rate in the two states respectively [9,10]. Consequently, California, Arizona and New Mexico require reporting of newly diagnosed cases of infection to their state health departments. Although Texas remains an endemic region, reporting is not mandatory in part due to the lack of a comprehensive study and/or epidemiologic review of cases.

Our results confirm a suspected increasing occurrence of Coccidioidomycosis at a west Texas regional referral hospital. This review indicates a 70.3% increase incidence rate in 2012 compared to 2008. Interestingly, a sudden jump occurred in the annual diagnoses during 2008 when trending the data over a nine-year period beginning in 2004. However, there is no correlation significance of the first fiveyear peri- 4od of 2004-2008 total cases versus the second five years, 2008-2012 (Figure 1). Figure 1: Coccidioidomycosis incidence in a regional referral medical
center of west Texas from January of 2004 to December of 2012. There is a 70.3% increase in incidence rate in 2012 compared to 2008. A sudden increase occurred in the annual diagnoses during 2008 when trending the data over a five-year period beginning in 2004. However, there is no correlation significance observed.

Although patient age does not correlate with likelihood of disease, there is a significant gender related difference. Table 1 depicts the average age of diagnosis as 52.08 (± 15.81) and 55.86 (± 14.51) years old for male and female patients, respectively. The majority of diagnosed patient ages range between 40 to 79 years (Table 2), and no significant age difference exists among gender of the Coccidioidomycosis positive patients (P=0.1059). There are more male patients than female (96 vs.78) in our study and when compared to all hospital admissions a significant male related trend is noted (***P = 0.0011). During the nineyear study period 44% of all hospital admissions are male, yet 55% of all Coccidioidomycosis positive patients are male (Figure 2).

Table 1: The incidence, gender, and ages of patients diagnosed with Coccidioidomycosis in a regional referral medical center of west Texas from January 2004 to December 2012.

Table 2: Number of Coccidioidomycosis by age and gender. 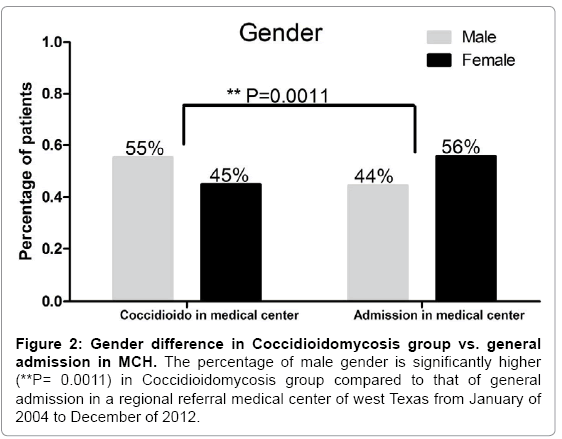 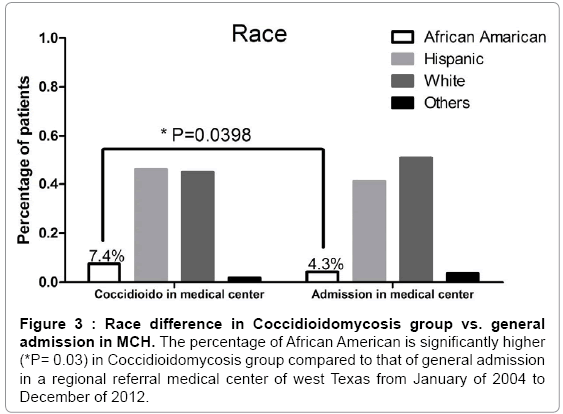 The final analyses include body systems affected in this cohort and an important identification of a cancer related risk. As described by others, the majority of cases herein involves the respiratory tract and manifest as lung nodules (48.85%) or pneumonia (35.06%). Additional cases include skin lesions (4.60%), central nervous infection (4.02%), gastrointestinal with diarrhea (0.57%), and only 1.14% musculoskeletal, well below that reported by others (Table 3). Additionally, patients in certain ethnicities with a co-morbid finding of malignancy exhibit higher risk for infection overall (**P=0.01).

Table 3: the clinical presentation of Coccidioidomycosis in a regional referral medical center of west Texas from January 2004 to December 2012.

Centers for Disease Control (CDC) reports list state-specific increased Coccid- 5 ioidomycosis cases in Arizona and California during 1998–2001 and 2000–2007, respectively. The reported overall incidence increases from 5.3 per 100,000 populations in the general endemic area (Arizona, California, Nevada, New Mexico, and Utah) in 1998 to 42.6 per 100,000 in 2011 [9,11]. Correspondingly, the number of west Texas cases, in this retrospective review, increases 70.3% from 2008 to 2012. At the time of the 2011 CDC report, more females than males have the disease in Arizona, yet the opposite is true in California with the ratio of male to female cases of 2:1.12 In our study, the upward trending overall cases starts in 2008 but analysis over nine years identifies consistently higher rate of infection in males (55%) compared to total general hospital admissions (44%).

Texas similarities to the endemic states such as required reporting and detailed description of other epidemiological factors disappear with further literature review. The most recent CDC documents (published in March of 2013) maintain that Coccidioidomycosis is endemic to Texas but not reportable to the states’ health department [12] The lack of a systematic reporting requirement of Coccidioidomycosis in this endemic region may lead to an underestimation of disease burden in Texas. Furthermore, Coccidioidomycosis west Texas reports date back to as early as 1967, with an outbreak among 10 children in a small community in El Paso [13]. Also, in the 1970’s, Karen Williams’ manuscript describes a localized outbreak in nine children at Beeville, Texas [14]. Neither provides the detail documented herein, thus making our study a first relatively complete review of Coccidioidomycosis in a regional referral medical center within the endemic region of west Texas. A detailed analysis of Coccidioidomycosis is needed in west Texas since it provides the right environment for propagation of the disease. The relationship between climatic conditions and the outbreak of Coccidioidomycosis is well documented. The characteristic favorable conditions for the growth of Coccidioides include an annual rainfall of 5-20 inches, alkaline soil and a prolonged hot, dry season of several months followed by precipitation [15]. The return to dry and windy conditions after moisture brings about hyphal death of the arthrospores and spread of the spores [16]. The average 6 annual precipitation in Odessa, Texas is less than 15 inches with very hot and long summers. Also, the commonly windy conditions of west Texas may contribute to spore dissemination. Additional epidemiological studies are warranted in this region.

This study has the usual limitations of a retrospective chart review. Additional variables not addressed are the prolonged climate change of drought during the study time period, as well as marked increase of oil well drilling and the consequent rapid population growth. Additionally, focusing our research at one hospital in the endemic region limits extrapolation of our results. However, such a dramatic increase in cases may very well signal an emerging infectious disease that needs more attention. Estimates predict an annual cost of the diagnosis and management of $34,000 per person without calculating losses due to potentially months of absence from school or work [3,17]. The current study not only updates us on the status of Coccidioidomycosis in west Texas, but also increases awareness of the disease in an endemic area with little previous documentation of cases. We believe this information will prime further cost improvement in diagnosis, treatment efficiency and prevention of the dissemination, as well as signal the need to consider legislation regarding mandatory reporting of Coccidioidomycosis cases in the state of Texas.

Support for this project included a grant from the Texas Academy of Family Physicians Foundation (TAFPF).