Copyright: © 2015 Masri MA, et al. This is an open-access article distributed under the terms of the Creative Commons Attribution License, which permits unrestricted use, distribution, and reproduction in any medium, provided the original author and source are credited.

There is mounting molecular evidence to suggest mitochondrial malfunctions as a key element in turning-on the vicious circle of oncogenesis in the human body. Cytochrome c oxidase II (MT-CO2) encoded by mitochondrial DNA, and implicated in a number of tumors, has been shown to bind directly to cytochrome c and is speculated to regulate apoptosis through this affinity for cytochrome c. In an attempt to understand the effect of MT-CO2 depletion on the cell function we employ RNA interference and low density arrays encompassing six cancer pathways to gain insights on the potential effect on gene expression caused by siRNA specific to MT-CO2. The results show that MTCO2 knock- down initiated differential expression in eleven genes involved in different pathways including cell cycle, signaling, apoptosis and Angiogenesis, indicating that mtDNA and sMT-CO2 in particular may be key players in the stability of the genome and its functions during tumoregensis.

As the enzyme at the crossroads of oxidative metabolism, cytochrome c oxidase is expected to s play a role in the Warburg effect [1]. Modulation, particularly depletion of mitochondria manifested in cytochrome c oxidase (MT-CO2) and other key enzymes has been implicated in tumorigenic transformation [2-4]. Low expression of MT-CO2 was suggested to be a marker of cancer risk in familial colon cancer [5]. Moreover, poorly differentiated colon carcinomas expresses low levels of MT-CO1 and MT-CO3, and MT-CO1 and MTCO3 mRNAs return to higher levels when tumor cells were induced to differentiate [6]. These various qualities qualify the mitochondria and MT-CO2 to become one of the potential drug targets in cancer and other related biological dysfunctions [7]. To determine whether mtDNA depletion could be associated with malfunctions of essential genes like those involved in apoptosis or DNA repair we set an vitro system to evaluate such an effect by generating siRNA specific to the MT-CO2 knock-down.

MT-CO2 was amplified using the primer (CO2-F 5′ TAGGTCTACAAG ACGCTACTT3′ and (CO2 5′CTAAATCTAGGACGATGGGC 3′), BLOCK-iTTM Dicer RNAi kits (Invitrogen, catalog nos. K3600-01 and K3650-01) were used for the generation, purification, and subsequent transfection of MT-CO2- specific d-siRNA. THP-1 cell line was grown in RPMI medium supplemented with 10% fetal bovine serum in 5% CO2 and 37°C atmosphere. RNA extracted from both experimental and control THP-1 cells was treated with DNAse (Invitrogen) according to manufactures condition and then used to generate cDNA by reverse transcription (Invitrogen). Real-time quantitative PCR (qPCR) was then used to assess transfection efficiency. The difference between test and control was defined as DCt (sCt –Ct). The larger the DCt the lesser COXII expression the sample had. Each analysis was done in duplicate. The mean value of DCt was calculated for test and control and was an indicator of the level of MT-CO2 expression. The 2–ΔΔCT method was used to calculate a normalized expression change between the means of control and test samples. For low density arrays, probe was prepared using 2 μg of RNA extracted from experimental and control THP-1 cells. Hybridization was conducted using manufactures conditions (cDNA GEArray Q Series kit). The signal was visualized using Chemiluminescent detection kit (Phototope-Star detection Kit, BioLabs, Cat. #7020S) according to manufactures instructions. The membrane plotted with 95 genes (Table 1) was then subjected to Xray, film was developed and scanned. Both test and control cells expression values were normalized with the house keeping gene. Spot intensities were measured and compared using ImageJ (1.42q) in both experimental and control array. Spots were then normalized according to the positive control`s signal and background was subtracted using negative control area intensities as mean.

Table 1: Genes and pathways included in the array. 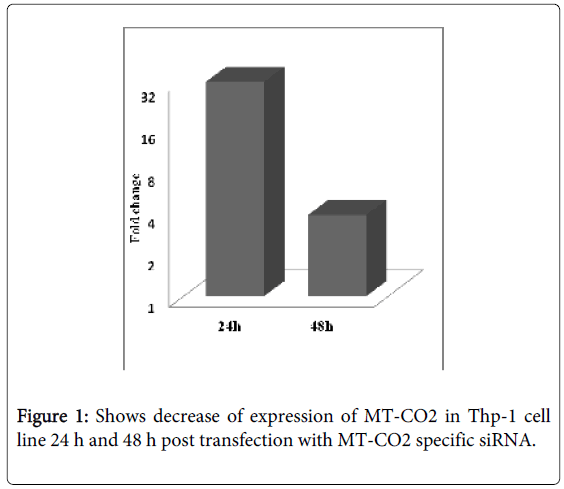 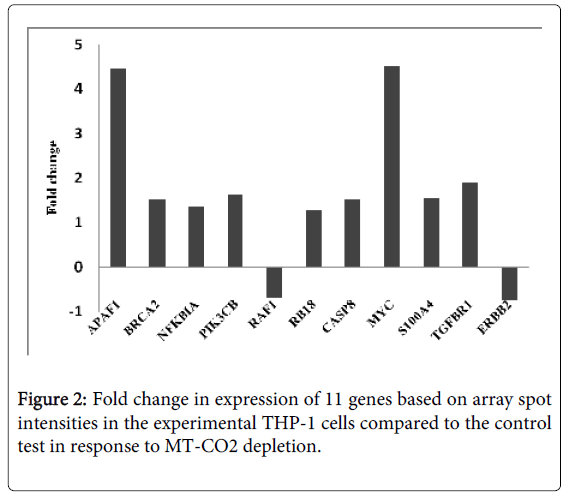 Figure 2: Fold change in expression of 11 genes based on array spot intensities in the experimental THP-1 cells compared to the control test in response to MT-CO2 depletion.

MT-CO2 induced down regulation in this study appears to affect the mitochondrial apopotic pathways, a well-established feature and hallmark of many invasive tumors. Particularly interesting is the up regulation of CASP8 and not CASP9, an indication of the activation of an alternative apoptosis pathway. Another major components of the programmed cell death pathways is Apaf1 scaffolding protein. APAF1 is the structural core of the apoptosome and it has been shown that the key event in Apaf-1-mediated caspase-9 activation is cytochrome cinduced dATP binding to Apaf-1 [8]. However the absence of caspase 9 (included in the array) which binds the APAF1 in mitochondrial pathway might indicate either binding of APAF1 by another molecule or an activation of an antiapoptotic negative feedback loop initiated by the absence of the target protein.

RB and BRCA2 upregulation is likely a sign of increased DNA damage due to MT-CO2 induced depletion enhanced by the upregulation of NFKB1A; binding NF-kappaB prevent its activation and its subsequent important mediation of resistance to apoptosis. Moreover it has been shown that BRCA1 localize to the mitochondria [9] thus raising the possibility of direct communication between this organelle and tumor suppresser protein networks. The up-regulation of S100A4 and PIK3CB might be associated with a more aggressive phenotype in vivo, as the products of 100A4 is able to enhance cell proliferation and metastasis (S100A4), while PIK3Cb has an indirect inhibitory effect on the apoptotic factor Bad and hence can prevent apoptosis.

The potential net result of the genetic and physiological changes (a possible consequence of the down-regulation of MT-CO2 expression) within the tumor is to induce HIF1 (hypoxia inducing factor 1) and actively shift energy production from mitochondrial to glycolytic sources in both hypoxic as well as oxygenated regions of the tumor (in solid tumors). HIF1 alone can drive the major metabolic changes within the tumor that were identified by Otto Warburg. An important consequence scenario is that activation of the PI3K pathway can also result in HIF1α accumulation in normoxia [10]. Oncogenic transcription factor MYC up-regulation following MT-CO2 induced depletion may have a potential role in driving mitochondrial biogenesis. MYC can dimerize with its activating partner MAX and directly transactivate the gene encoding transcription factor A (TFAM) [11], which contributes to the expression of the mitochondrial genome and the genes needed for mitochondrial DNA replication.

In conclusion we provide insights onto the potential impact of mitochondrial depletion and particularly the molecular events ensuing from the knock-down/depletion of key genes like the MT-CO2 along the various pathways involved in tumerigensis and functional integrity of this organelle.

This study received financial support from the International Center of Genetic Engineering and Biotechnology (ICGEB).