Copyright: © 2017 Kral N, et al. This is an openaccess article distributed under the terms of the Creative Commons Attribution License, which permits unrestricted use, distribution, and reproduction in any medium, provided the original author and source are credited

Background and study aims: Primary care physicians play a principal role in colorectal cancer (CRC) screening in many countries that are using a two-step program; faecal occult blood test (FOBT)+colonoscopy. In order to improve the screening uptake in the Czech Republic ambulatory gynaecologists in addition to GPs were involved in FOB testing in 2009. Our objective was to describe the contribution of gynaecologists to the provision of CRC screening.

Methods: Data reported to health insurance companies and aggregated by the Czech National Reference Centre were used to monitor the screening process. We focused on the coverage by FOBT examination and positive FOBT rate. We describe time trends in the number and proportion of people tested, describe regional variations and show differences according to sex and age.

Conclusions: The participation of gynaecologists has contributed significantly to the higher participation of women in the real life Czech CRC screening program, particularly in the 50-54 years old age group, nevertheless the key responsibility stays with GPs. This measure is likely to be applicable in health care systems with a network of ambulatory gynaecologists, as is the case in the Czech Republic and in most Central and Eastern European countries.

Colorectal cancer (CRC) is the second most commonly diagnosed form of cancer in Europe, with over 400,000 cases diagnosed each year [1]. By 2020, the annual incidence is expected to rise to 502,000 cases [2]. The five-year relative survival rate following CRC diagnosis has been improving during the last decade due to advances in diagnosis and treatment [3]. There are over 3 million people living with CRC in Europe. CRC accounted for 212 000 deaths in 2008 and this is expected to rise to 248,000 in 2020 [2,4-7].

There is good evidence of the benefits of screening through mortality reduction. CRC screening belongs, together with breast and cervical cancer screening, to the three screening program that fulfil WHO requirements and whose implementation has been recommended by the Council of the European Union [8]. European guidelines for quality assurance in CRC screening and diagnosis have been available since 2010 [9,10]. Nevertheless a number of countries in Europe have been introducing or piloting organized screening program with considerable variations [11,12]. The most common design of the program is based on faecal occult blood testing (FOBT) for men and women aged 50-74 years [10] annually or biennially, with varying involvement of primary care physicians. In some countries (Germany, Czech Republic, Slovakia, France) primary care physicians play a principal role in recruiting people, counselling screening, performing FOBT, dealing with negative or positive results and referring for a colonoscopy [13,14]. In other countries they just have an advisory role (UK, The Netherlands, and Slovenia). The differences reflect variations in health care structures and systems but also differing levels of knowledge and awareness, factors which are relevant to educational and research policy. So far, the implementation of CRC screening is suboptimal and many consider a greater role for primary care as a key to optimal efficiency of CRC screening [4,6,11,14-18]. The international exchange of information, sharing of knowledge, experience and awareness of pitfalls in screening is essential for the progress of screening and the fight against CRC [19].

The Czech Republic (population 10.5 million) ranks high among European countries in CRC incidence (age standardized rate 57.9 per 100,000; 5th place) and mortality (24.1 per 100,000; 9th place) [20]. The Czech Republic belongs among those countries with the longest tradition of screening-the program was introduced in 2000 as an organized two-step program; faecal occult blood test (FOBT) +colonoscopy [21].

The program included an asymptomatic population from the age of 50 without any upper age limit. The decision on the eligibility of individuals for screening was left to the general practitioner’s discretion. Guaiac FOBTs were distributed, collected and analyzed in surgeries of general practitioners (GP). The reimbursement was provided when test was completed. Patients with positive results were referred to gastroenterological outpatient or inpatient clinics. The screening program has been driven by The National Board for CRC screening [22].

Despite 12-years of the existing program in the Czech Republic, coverage was unsatisfactory and did not exceed 20% of the target population. In order to improve participation in screening, several changes were introduced in 2009:

1. FOBT performed on an annual basis at 50-54 years of age, then biennially after 55. Immunochemical tests (both qualitative and quantitative, no cut-off centrally recommended) were approved for screening.

2. Not just GPs but also primary care gynaecologists were involved in FOBT screening.

Our objective was to describe the contribution of gynaecologists to the provision of CRC screening with FOBT and discuss how screening coverage has improved for different subgroups of the Czech population.

There is a centralized system of data monitoring established for all three organized screening program in the Czech Republic. The results are available for The National Board for CRC screening and are used for information, education and assessment of providers from different disciplines, at different levels and locations.

Both screening tests and subsequent examinations in the Czech Republic have their costs reimbursed from the public health insurance with practically universal population coverage; therefore, data on medical procedures reported to health insurance companies can be used to support the monitoring process. The Czech National Reference Centre has played a key role in the aggregation of this data from all health insurance companies. Data analysis itself has been performed by the Institute of Biostatistics and Analyses at Masaryk University.

In our analysis, we focused on key performance indicators proposed by the European Guidelines [9], the coverage by examination (FOBT), computed as a ratio of the number of people tested within the screening intervals (1 or 2 years) to the number of people in the target population at the end of the reporting period, and the positive FOBT rate. We describe time trends in the number and proportion of people tested and show differences according to sex and age. We discuss the involvement of gynaecologists in providing the FOBT screening and also describe regional variations, which were analyzed at the level of regions (population of 0.5-1.0 million) or districts (population of 50 thousands-0.5 million). 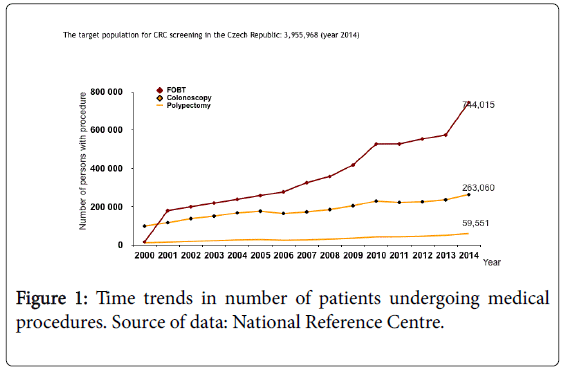 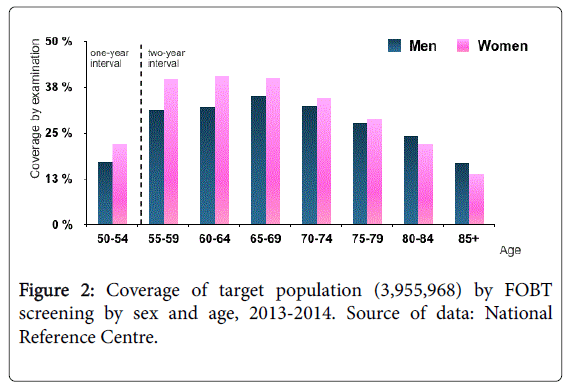 Figure 3: Proportion of FOBT in women by age performed by GPs or gynaecologists, 2012-2014. Source of data: National Reference Centre. Figure 4: Proportion of FOBT in women by age performed by GPs or gynaecologists, 2013-2014. Source of data: National Reference Centre. 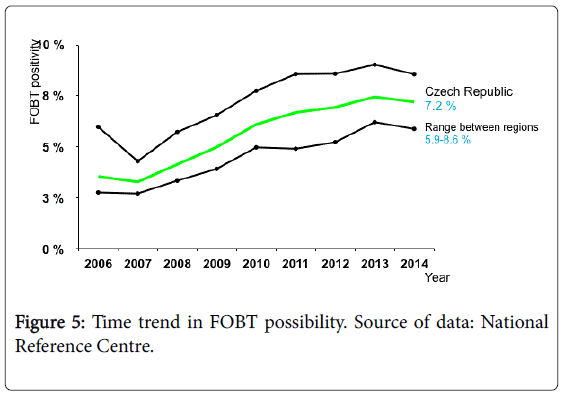 The participation of gynaecologists has contributed to the higher participation of women, particularly in the 50-54 age groups. This is an age group of women with a higher adherence to gynaecologists than to GPs. These women mostly have husbands in the screening age and have the potential to influence them. The data also suggest there is a wide regional variation in the involvement of gynaecologists. Gynaecologists in approximately 25% of districts of the country did not participate in screening at all or did not contribute significantly (fewer than 5% of FOBT performed by gynaecologists). These findings are similar to the findings for GPs and reflect not only variations in the attitude to screening but also differing levels of knowledge and awareness. There is a potential for improvement through education, feedback of information and use of motivational tools including higher reimbursement [24]. The idea of involving gynaecologists in real life screening has its origin in consideration of their role and experience in the other two screening program and in the fact that women are more positive about screening and are capable of influencing their male partners, who are often reluctant to undergo a screening examination. Women under the age of 70 years old had a higher participation in FOBT screening than men [6,7,18,22,25,26]. Studies show that a second doctor´s opinion and repetition of the information can increase compliance [18,27,28]. In addition women often limit their medical contacts only to visits to gynaecologists [29]. Studies exploring compliance among women who were offered the opportunity by gynaecologists of participating in all three screening modalities, showed a high compliance rate for breast and cervical cancer screening (93% and 86% resp.) while only 66% complied with CRC screening [12].

Gynaecologists have shown adherence to guidelines not only in FOB testing but also in referring FOBT positive persons for colonoscopy and reporting. The most likely reason for the increased FOBT positivity rate is the ultimate use of qualitative immunochemical tests among gynaecologists whereas a substantial proportion of GPs still used guaiac FOBT in 2009-2010. Most gynaecologists perform the test on analyzer qualitative devices with a cut-off value of 100 ng/ml. The increased FOBT positivity rate may also reflect a lower level of experience among gynaecologists in FOBT management. Similarly the FOBT positivity rate in general practice started at 6% and above in 2000, when the program was introduced. The results of a study from the US suggest that gynaecologists and nurses did not differentiate appropriately between eligible and non-eligible (risk) patients [27,37]. The National Board for CRC screening has banned the use of guaiac tests since the beginning of 2013 and discussed the standardization of immunochemical tests. The key change has been implemented in the beginning of 2014: an addressed invitation system, changing an externally organized program to a population based one. The letter invites either to GP or gynaecologists. The introduction of a quantitative test with a cut-off level appropriate to local conditions will be the next step. The FOB quantitative point of care testing (POCT) systems as well as central analyzers is currently available in the Czech Republic.

The article presents balanced data from the real-life national program of colorectal cancer screening. The data system has practically universal coverage and includes all providers in all regions. The motivation of providers to deliver true data is ensured by the link to the reimbursement scheme. The data collection, analysis and presentation represent a feedback for the entire program. We are limited in our ability to compare the efficiency of involvement of gynaecologists in FOBT screening elsewhere because the research in this field is scarce. The limitations in our knowledge about the type of FOBT used in practice do not allow us to explain clearly the reasons for the higher FOBT positivity rate. We have also not yet been able to explain the variations between regions and districts.

The introduction of immunochemical tests, annual testing in the age group 50-54 years and the involvement of gynaecologists were observed to be effective measures for increasing screening coverage, while the introduction of primary screening colonoscopy did not substantially affect the uptake in screening. Our study shows that the involvement of primary care gynaecologists in FOB testing does increase the participation rate in colorectal cancer screening to some extent, nevertheless the key responsibility stays with GPs. The measure is likely to be applicable in health care systems with a network of ambulatory gynaecologists, as is the case not just in the Czech Republic and in most Central and Eastern European countries, but also in North America, as already mentioned.

Provision of data by National Reference Centre and support of National action plan for screening is gratefully acknowledged.