Copyright: © 2015 Bhattacharyya S, et al. This is an open-access article distributed under the terms of the Creative Commons Attribution License; which permits unrestricted use; distribution; and reproduction in any medium; provided the original author and source are credited.

Background: Cancer of the throat or larynx is one of the predominant cancer types in India and Intensity Mediated Radiation Therapy (IMRT) is the most crucial treatment regimen against the disease. We aimed to examine the effect of Circulating Endothelial Progenitor (CEP) cells in Laryngeal cancer patients undergoing radiation therapy.

Patients: Five Laryngeal cancer patients were selected for the work. All patients were suffering from Squamous Cell Carcinoma (SCC) of the glottis and admitted to the institute with CT1 and CT2 stage of tumor with no lymph node metastasis (CN0). After thorough check up the patients were subjected to conventional mononodal radiotherapy (IMRT), fractionated doses to the highest dose (1.8-2 Gy per fraction). Peripheral Blood Mononuclear Cells (PBMC) was isolated from all 5 patients and flow cytometric analysis (using anti CD 44 and CD309 monoclonal antibody) was performed before and after completion of the entire course.

Results: Results showed upregulation of the CEPs in all cases after exposure to radiotherapy. Additional immunofluorescence staining confirmed the rapid increase of these cells indicating a strong correlation between the exposure to ionizing radiation and stem cell expression in patients suffering from Glottic cancer.

Conclusion: Increase in the CEPs suggests that the tissue damage due to radiation exposure activate the stem cell niche and allures CEPs in the peripheral blood for angiogenesis. Further prospective assessments are warranted.

In the past decade, researchers have gained significant insights on the role of bone marrow (BM)-derived cells in adult neovascularization. A subset of BM-derived cells, called circulatory endothelial progenitor cells (CEPs), has been of particular interest, as these cells were suggested to home to sites of neovascularization and neoendothelialization and differentiate into endothelial cells (ECs) in situ, a process referred to as postnatal vasculogenesis. Therefore, EPCs were proposed as a potential regenerative tool for treating human vascular disease and a possible target to confine vessel growth in tumour pathology.

The nonhematopoietic CEPs are not HSC derivedcells, which can be isolated from blood or tissue samples via the help of sequential culture and distinguished by their rather obvious embryonic cells (EC)-like phenotype [7] or differentiation capability into EC (-like) phenotype [8]. The origin of nonhematopoietic CEPs remains to be clarified, but they are generally thought to be derived from nonhematopoietic tissue prone lineage stem cells or organ blood vessels but not likely from HSC [9].

Another major problem with CEPs was its identification. Several literature has documented various markers for CEPs including CD133, CDKDR, CD3, CD19, CD33 etc. However, there is still controversy on choosing the marker while working with CEPs. In our study we chose two different receptor markers for identification of CEPs-CD44 which is a well-known marker for stem cells as CEPs show stemness and Flk-1, which is type-II receptor for Vascular Endothelial Growth Factor (VEGFR-II), a protein expressed in endothelial cells through which vasculogenesis as well as angiogenesis occurs.

Previous works of Brunners et al. showed that Head and Neck Cancer patients show elevated level of EPCs whereas there was no alteration in Circulating Endothelial Cells (CECs) - endothelial cells that have been shed from the lining of the vascular wall into the blood stream [10].

In another study, Plaumbo et al. showed that radioiodine therapy causes temporary fall in CEP count [11]. When it comes to the treatment regimen, the most frequent tool for treating Glottic cancer is still radiotherapy at a dose range of 65-75 Gy, the highest range of radiation dose among all types of cancers. In this pilot study, we tried to examine the alteration in the CEP count present in peripheral blood of Glottic cancer patients undergoing radiotherapy.

5 Patients undergoing IMRT (60 Gy, 2 Gy fractions) in Chittaranjan National Cancer Institute (CNCI), Kolkata, India, were screened from April, 2014 to March, 2015, and demographic details for all patients including age, sex, and personal history about smoking were recorded. All blood samples were collected on the day radiation treatment started (for pre-treatment) and after one week of completion of total radiotherapy cycle (for post-treatment).

All tumors were histopathologically categorized as squamous cell carcinoma of the glottis. Patients with recurrent glottic tumor and other types of laryngeal cancer (i.e., verrucous, sarcomatoid, and lymphoepithelial carcinoma) were excluded from the study. All works described here had been carried out in accordance with The Code of Ethics of the World Medical Association. (Declaration of Helsinki) and after getting formal consent from each patient.

PBMCs were isolated from the whole blood by Ficoll density gradient centrifugation. The peripheral blood was mixed with 1X Phosphate Buffer Saline (PBS) and the mixture was put dropwise on Ficoll in 4:3 ratios.

The samples were next centrifuged in 900 rpm for 30 minutes in a fixed angle rotor at room temperature and PBMCs were carefully collected from the buffy coat. 0.3 × 106 cells were taken for each experiment and after thorough washing using PBS; the cells were incubated with PE tagged anti CD 44 (ScBt) and FITC tagged anti Flk-1 antibodies (ScBt). After proper fixation with paraformaldehyde, the enumeration of CEP count was acquired using BD FACSCalibur Flow Cytometer.

The PBMC suspension was poured on a slide (100 µl) and fixed with Methanol for 15 minutes. Once fixation was done, cells were incubated with rabbit polyclonal antibody against CD 44 and Flk-1 (1:600 dilutions, ScBt) for 1 hour at room temperature.

FITC conjugated secondary rabbit polyclonal antibody (1:800 dilutions) were used and incubated at room temperature for 45 minutes. Diaminidophenylindole (DAPI) was used for the nuclear staining and mounting. The cells were imaged under fluorescence microscope (Leica DM4000 B, Germany).

Results showed marked upregulation in CD 44 and Flk-1 expression in all cases after completion of radiotherapy (Figure 1). When compared, the patients’ pre-treatment status for CEPs increased almost up to 1.5 fold. 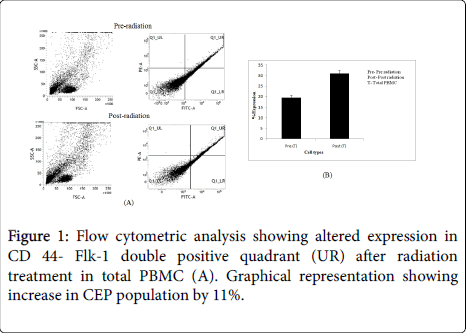 Surprisingly when the expression status of CD 44 and Flk-1 was examined in the monocyte population, post-radiation parameters showed slight decrease in those proteins’ expression (Figure 2). Immunofluorescence staining clearly showed positive expression for CD 44 as well as Flk-1 in the PBMCs (Figure 3). 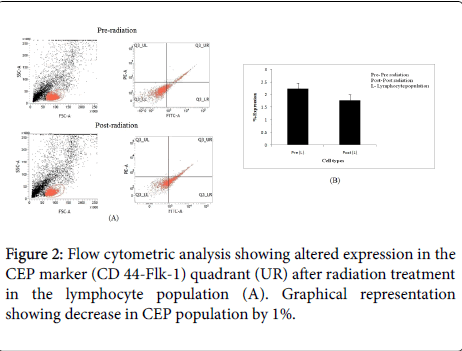 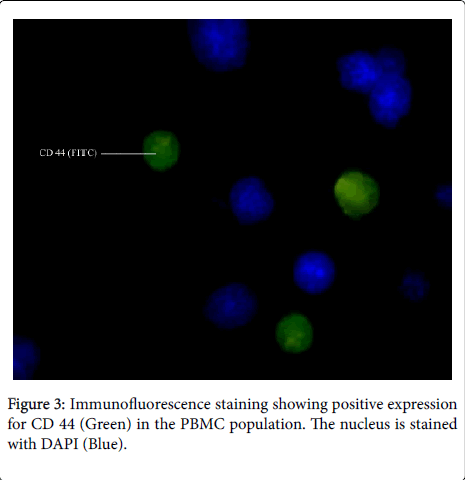 Figure 3: Immunofluorescence staining showing positive expression for CD 44 (Green) in the PBMC population. The nucleus is stained with DAPI (Blue).

Recent study suggests that endothelial cells are the principal target of radiation injury in the intestinal mucosa and elsewhere [12,13]. Apoptosis of endothelial cells in the microvasculature occurs first, whereas death of neighboring epithelial cells is a secondary event leading to clinical symptoms associated with mucositis, colitis, and other organ toxicities. Although radiotherapy is known to reduce the pool of hematopoietic stem cells [14], so far, there have been only a few clinical reports on the detection of circulating CEPs and most of these studies have evaluated the significance of CEPs in non-cancer conditions [15-17]. The significance of circulating CEPs in cancers has been reported in case of multiple myeloma [18,19].

Recent studies have also demonstrated that the number of CEPs in the peripheral blood of cancer patients is altered by disease status and treatment, such as chemotherapy and anti-angiogenic therapies [20]. Accordingly, a potential value of CEPs as biomarker in the disease course and responses to newly introduced chemotherapeutic drugs is increasingly being discussed. Recently, a series of investigations have suggested that endothelial progenitor cells (CEPs) derived from the bone marrow are present in peripheral blood and these cells get recruited to denuded areas for incorporation into the nascent endothelium [21,22]. New therapies targeting to induce these progenitor cells, which are fundamental to radiation induced injury repair, can significantly improve clinical treatment of cancer. Therefore, it is of paramount importance to identify subpopulations of cells exhibiting stem marker expression and behavior. Our study showed that Glottic cancer patients undergoing IMRT has an increased amount of CEPs as response to radiation which may be used as a marker for further characterization of the disease.

The authors have declared no conflict of interest exists.

We would like to express our gratitude to Prof. (Dr.) Jaydip Biswas, Director, CNCI for his support throughout the entire work. We are also thankful to the Department of Science and Technology (DST), India for funding the project.