Isolated Lesion of the Lateral Pectoral Nerve due to Repeated Trauma

Copyright: © 2017 Budak F, et al. This is an open-access article distributed under the terms of the Creative Commons Attribution License, which permits unrestricted use, distribution, and reproduction in any medium, provided the original author and source are credited.

We present two cases of progressive isolated damage to the lateral branch of the pectoral nerve with marked atrophy of the clavicular portion of the major pectoral muscle. In our patients, the mechanism of isolated lesions of lateral pectoral nerves have been attributed to repetitive external microtraumas and pressure on the nerve trajectory between the chest and shoulder during sports or occupational activities.

A twenty-six years old man, who had progressive atrophy of the right clavicular portion of pectoralis major muscle accompanied by pain on the right chest and shoulder for three months, was referred to our neurology outpatient clinic. He was a worker of an automotive plant. He had been working in a leaning position at a narrow place with his right arm stretched out. At this position he had to lean up and forward and pounding tools were causing an intermittent but chronic load on the right side of his chest and his right shoulder. On a followup physical examination, asymmetry of the lateral pectoral region was noted due to moderate atrophy of the pars clavicularis of the right pectoralis major muscle (Figures 1 and 2). There was no tenderness on the chest or shoulder. Motor strength, deep tendon reflexes and sensation of the upper extremites were normal. Nerve conduction studies (NCS) demonstrated prolonged motor latency and decreased amplitude of the right lateral pectoral nerve. (Right 3.3 ms and 2,4 mV; Left 2.1 ms and 6.3 mV) (Table 1). Needle electromyography (EMG) of the right clavicular portion of pectoralis major muscle revealed a few denervation potentials, increased number of polyphasic motor units with decreased recruitment and suggestive of an axonal injury. EMGs of the other muscles were within normal limits, as were NCS of the upper extremities. Magnetic Resonance Imaging (MRI) of the cervical spinal cord and brachial plexus were normal. Following a period of physiotherapy including soft tissue mobilization in combination with exercise program and changes in labor circumstances, the patient progressively recovered normal muscle bulk in approximately six months. Figure 1: Pronounced areolar asymmetry due to atrophy of right pectoral muscle in case 1. Figure 2: Pronounced areolar asymmetry due to atrophy of right pectoral muscle in case 2.

A twenty-two years old man noticed progressive wasting and weakness of his right chest muscle. Six months earlier, the patient had undertaken a rigorous, intensive program of supervised, kick-boxing training, involving repeated fists to the region between the chest and the shoulder. Examination showed moderate atrophy with visible contraction of the pars clavicularis of the right pectoralis major muscle. (Figures 3 and 4). Motor strength, deep tendon reflexes and sensation of the upper extremites were normal. NCS demonstrated prolonged motor latency and decreased amplitude of the right lateral pectoral nerve (Right 3.5 ms, 2.1 mV; Left 2.2 ms, 5.9 mV) (Table 2). EMG of pars clavicularis of the right pectoralis major muscle revealed dense denervation activity decreased voluntary motor unit potentials (MUAPs) which were of polyphasic. EMG and NCS of the other muscles and nerves of the upper extremities were normal. MRI of the cervical spinal cord and brachial plexus were normal. The patient received physiotherapy and rested the affected regions; there was mild atrophy of the right pectoralis major muscle at his sixth month followup. 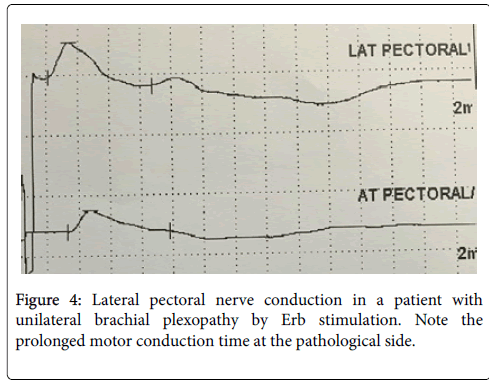 Figure 4: Lateral pectoral nerve conduction in a patient with unilateral brachial plexopathy by Erb stimulation. Note the prolonged motor conduction time at the pathological side.

Isolated injury of lateral pectoral nerve is unusual. In the literature there are cases described and attributed to nerve damage as a result of traction injuries, seat belt trauma and as a complication of mastectomy [1-3]. Two cases of non-acute damage to the lateral pectoral nerve were recently described by Gardetto in whom there were gradual development of focal pectoralis atrophy and weakness for two years following initiation of a high intensity weight training program [4].

Our cases were exposed to external forces on the nerve between chest and shoulder while using a tool, or repetitive fists in a certain manner for a long period. The lateral pectoral nerve (LPN-lateral anterior thoracic) arises from the lateral cord of the brachial plexus, and through it from the fifth, sixth, and seventh cervical nerves. It passes across the axillary artery and vein, pierces the coracoclavicular fascia, and is distributed to the deep surface of the pectoralis major muscle. In our cases the sternocostal part of the muscle innervated by the medial pectoral nerve was spared.