Copyright: © 2016 Mariam MG, et al. This is an open-access article distributed under the terms of the Creative Commons Attribution License, which permits unrestricted use, distribution, and reproduction in any medium, provided the original author and source are credited.

Background: Around 30-40% of patients who are attending primary care setting have emotional problems. The majority of these were often remaining unrecognized, misdiagnosed and inappropriately managed. Improving the knowledge and attitude of the health workers especially nurses is important to overcome this problem.
Objective: To assess knowledge, attitude and associated factors of nurses towards mental illness in Addis Ababa public hospitals, Ethiopia.
Methods: Institution based cross-sectional study was conducted from April 12 to May 12, 2014. The data was collected from 423 Nurses using structured Knowledge and attitude questionnaire for health workers, which is designed by National Institute of Mental Health and Neurosciences. Participants were selected by using systematic random sampling methods. Data was entered using Epi-info 7 and analysis was conducted using SPSS 20. Bivariate and Multivariate logistic regression analysis was performed to identify variables which have significant association with knowledge and attitude towards mental illness. The level of significance association was determined by AOR with 95% confidence interval and P-value ≤0.05.
Results: A total of 400 participants were participated with a response rate of 94.5%, 50% were females. The average age was 31 ± 6.6 years.50% and 44.2% of nurses have adequate knowledge and Favorable attitude towards mental illness respectively. There was significant association between knowledge and profession, working department and taking training. Also sex, educational status, profession, institute of graduation and work experience of respondents were significantly associated with attitude at p Conclusion and recommendation: About half of nurse’s appear to have adequate knowledge and less than half of participant have favorable attitude. These unfavorable attitudes may cause certain problems like decrease in health care of person with mental illness. Practice based training at working areas regarding mental health problems need to be given for nurses.

A further challenge that needs to be addressed worldwide is the massive gap between population needs for mental health and what is actually provided in mental health care. The treatment gap particularly pronounced in low and middle income countries (LAMICs), where commonly over 75% of people with mental disorders receive no treatment or care at all, and less than 2% of health budget is spent on mental health [5].

A study conducted in South Africa reported that, among the general public, knowledge of mental illness was low and stigma was high. Another example can be seen in Nigeria, where the first large-scale, community representative study of popular attitudes towards mentally ill, found stigma to be widespread, with most people indicating that they would not tolerate even basic social interactions with someone with a mental disorder [6].

Mental health problems are more common in developed world than in developing world [7]. However, Ethiopian people have suffered from mental health problem and it accounts 12.45% of burden of diseases. Substantial number of patients attending various health care settings suffers from psychiatric disturbance with figures ranging from 15%to 50%. A majority of these cases are handled by nonpsychiatric where majority of them go unrecognized and are subjected to unnecessary investigation leading to inconvenience and financial loss [7,8].

Misconceptions about psychiatric patients being under the control of evil spirits (and therefore being dangerous) are the main motivations behind the inglorious, long and persistent use of physical restraints and endorsing of segregating attitudes by society towards them and Health workers are not completely free from these abovementioned unfavorable beliefs and attitudes towards psychiatric patients [9].

Studies also demonstrate that health professionals have negative attitudes toward some aspects of mental illness and were less optimistic about prognosis and less positive about likely long-term outcomes when compared with the general public [10]. Health care providers have been known to stigmatize patients who use psychiatric medications or services by offering discouraging advice, disparaging remarks, and rejecting behavior. This form of discrimination may have a negative impact on patients’ self-esteem and the way they seek help or adhere to prescribed medical treatments in addition, negative attitudes that manifest as apprehension or discomfort during patient interactions may lead to ineffective counseling or the lack of essential medical services [11].

Therefore the results of this study will be used as base line data for planning to improve the knowledge and attitude of nurses and for further studies on the subject area.

Institution based cross sectional study was conducted among nurse working at public hospital under Addis Ababa health bureau from April 12 to May 12, 2014. Addis Ababa is a capital city of Ethiopia. It is located 2500 meter above sea level at 9.03N and 38.74E. It has a total population of 3,059,000. The city has a total of 608 health facilities (which include hospitals, health centers, health stations, health posts and private clinics). Addis Ababa is divided in to 10 sub cities and 116 woreda with an area of 540 Km2. According to the 2010 population Census, the total population of Addis Ababa is about 3,384,569. There are 6 public hospitals under administrative city, with a total of about 2466 nurses, of which about 859 nurses were working in public hospitals under the city administration.

All nurses who have been working in all Addis Ababa public health hospitals under the Addis Ababa health bureau were considered as source population. Nurse who were available during the study period and fulfilled inclusion criteria were included in the study. Psychiatry nurses and other nurses who were unable to communicate to respond for the interview were excluded from this study.

Single population proportion estimate was used to determine the sample size considering the following assumptions; confidence interval (CI)=95%=1.96, margin of sample error=5%. Since there was no published study conducted in Ethiopia, proportion of knowledge, attitude of nurses towards mental illness was taken as 50%. Considering 10% non-respondent the final sample size was 423. Systematic random sampling was used to select intended study subjects from hospitals with Kth value of 2.

List of nurses were taken from each hospital administration then the selection of 422 nurses was performed proportionally (Table 1).

Table 1: Number of Nurses who are proportionally allocated to be interviewed in each public hospitals of Addis Ababa administration, Addis Ababa, Ethiopia.

Structured, self-administering, Amharic version questionnaire was used to collect data. Modified version of Knowledge and attitude questionnaire for health workers which is designed by National Institute of Mental Health and Neurosciences (NIMHANS), Bangalore, department of psychiatry questions was modified and used for mental illness. Questions used to assess socio demographic data and other relevant information was designed by the investigator. A total of 43 questions were asked. Data was distributed and collected by six trained psychiatric nurses and 2 health officers were recruited to as supervisors and facilitators.

The questionnaire was designed and modified appropriately. The tool was translated to local language (Amharic) to be understood by all participants and translated back to English. Facilitators and supervisors were trained before data collection. The questionnaire was pre tested in 5% of nurses working in outpatient and inpatient department outside the selected hospitals and based on the findings from the pretest, the questionnaire was revised and adopted.

Data entered using EPI info version 7, then exported to SPSS version 20 for analysis. Descriptive statistics was used to identify distributions of socio-demographic characteristics of study participants. Both bivariate and multivariable logistic regression analyses with 95% CI were used to see the association between each independent variables and outcome variables. Finally those variables which showed statistical significance at P<0.05 and 95% CI in the final model were reported as independently associated with Attitude and knowledge.

Ethical clearance was obtained from the Institutional Review Board (IRB) of college of medicine and health sciences, University of Gondar and from Addis Ababa administrative health bureau ethical committee. Formal permission was obtained from the medical director of each health facility and finally written consent was obtained from each participant during data collection. All participants were informed about the aims and purpose of the study, its contribution to the future development of health system; especially for mental health system in Addis Ababa as well as in the country. The right was given to the study participants to refuse or withdraw from the study at any time. For the purpose of anonymity participant’s name was not used at the time of data collection and all other personnel information kept entirely confidential.

Work experience and area of graduation 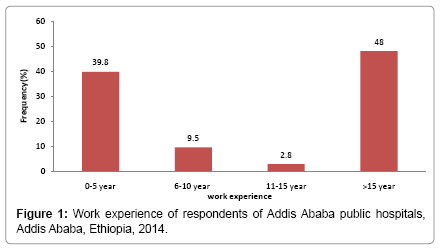 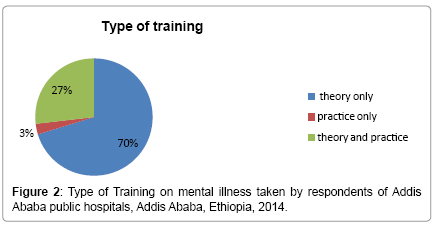 Knowledge and attitude of nurses towards mental illness

Nurses’ knowledge about mental illness was assessed by asking questions about cause, drug and manifestation of mental illness. In the same way, questions were asked to assess the presence of favorable (good) or unfavorable (bad) attitude among nurses towards mental illness. Then, the nurses were categorized as having "good" or "bad" attitude, "adequate" or "inadequate" knowledge about the issues under consideration based on their response to the questions and the definitions of the terms described under the heading ‘operational definitions’ in the thesis.

Factors associated with knowledge of nurses

In this study, both bivariate and multivariate logistic regression analysis were done to show the factors associated with knowledge on mental illness among nurses in public hospitals in Addis Ababa.

Factors associated with attitude of nurses

Profession, area of graduation, work experience and, ever took training are found to be significantly associated in multivariate logistic regression (Table 5).

Two hundred (50%) health workers have inadequate knowledge and 223 (55.8%) have unfavorable attitude towards mental illness. This result has some variation from study done in Nepal, overall adequate knowledge and by and large a positive attitude [12]. Also show differences with the study done in Jimma zone about 89 of the respondents were knowledgeable about mental health problems [17]. The possible reason might be socio cultural difference, the sample size and profession difference which was 135 nurses were participated during the study done in Jimma zone.

In this study two hundred twelve (52.5%) have favorable attitude. Study done in Maldives the attitude toward the mentally ills among nurses are generally positive attitude even when the respondents took limited amount of training [13].

Concerning attitude, female nurses were about 2 times more likely to have favorable attitude towards mental illness than males. This study show some variation from study done in chikador (18), in this study majority of the respondents were females with negative attitude. This variation may be due to socio cultural difference, exposure to the mental ill’s.

Those nurses with first degree were about 70% less likely to have favorable attitude than diploma nurses.

Regarding profession Midwifery nurses were 5.3 times more likely to have favorable attitude towards mental illness than clinical nurses. This result may be due to they have enough training, exposed to department which help them to know better.

About half of nurse's appear to have adequate knowledge and less than half of respondents had favorable attitude. Profession, current working department and ever took training were significantly associated with knowledge. Sex, educational status, profession, institution they graduated from and work experience were significantly associated with attitude.

Addis Ababa health bureau have to arrange short term and refreshment trainings for nurses working in the city. Future studies (interventional) should consider the effects of on knowledge and attitude of nurses.

I would like to thank University of Gondar and Amanuel mental specialized hospital for facilitating things for the success of the study and financial support. Also I would like to express my deepest gratitude for study Participants and data collectors for their unreserved contribution.