Labial Agglutination (Adhesion) in Pre-Pubertal Girls. What a Primary Care Physician Should Know?

Copyright: © 2012 Al Jurayyan NAM. This is an open-access article distributed under the terms of the Creative Commons Attribution License, which permits unrestricted use, distribution, and reproduction in any medium, provided the original author and source are credited.

Labial agglutination (Adhesion) or “fused labia” is defined as the partial to complete fusion of the labia minora or labia majora. It is usually painless. The diagnosis is made upon visual inspection, and those typically affected are children less than six years old. However, labial adhesion have been reported in women who are postpartum, postmenopausal, and those with co-existing vulvar lesion [1]. Labial adhesive should be distinguished from congenital deformities, as visually there is a mid-line raphe (line of fusion) present with labial adhesion that would not be apparent in a congenital condition. The incidence has been reported as approximately 0.6 to 3.0%. However, this may be significantly higher as many children with this condition are asymptomatic and remain unreported. Rates as high as 21.3% and 38.9% have been documented.

Labial agglutinations are thought to arise as a result of local irritation in a setting of low oestrogen [2]. While labial agglutinations is not uncommon in young girls, most cases are asymptomatic and spontaneously resolve as the girls enters puberty. Treatment is recommended only if the adhesion is symptomatic, resulting in urinary obstructive symptoms, as demonstrated by urinary difficulty dysuria, or recurrent Urinary Tract Infection (UTI).

The success rates for oestrogen medical therapy range from 50% to 100%. Parents should be instructed to use a finger to apply the oestrogen cream over the gray fusion line using some pressure. This should be done twice a day for 2-4 weeks but stopped if breast budding occurs.

In this article, we report our experience over the last two years 2011-2012 with five pre-pubertal girls who discovered incidentally by their mothers to have labial agglutination, discuss the problem and highlight its management with a brief review of the literature. The extracted data included patient demographics, relevant history, coinciding conditions, and the treatment regimen employed. Additionally, vulvar symptoms prior to and following separation of the labial adhesion were available. Diagnosis of symptomatic labial adhesion was made by the presence of an adhesion involving the labia and urinary symptoms such as, urinary difficulty, dysuria, or recurrent UTI.

All parents were instructed on the importance of vulvar hygiene. Measures which routinely employed to eliminate contact irritation and reduce co-existing inflammation were explained. The various measures used routinely in therapy were explained.

There were five girls diagnosed with labial agglutination in the period under review. Their age ranged between 6 months and 4 years, with a median age of 2 years and 6 months. All were Saudi. Three patients were found to have co-existing contact dermatitis of the vulva in addition to labial agglutination, and in one, the mother tend to use hot olive oil as emollient for skin protection. There was no evidence to suggest genital abuse, injury, or other regional trauma for any of the patients. None of the patients were treated with oestrogen cream prior to the evaluation at our clinic.

Four patients responded to application of the tropical estrogen cream in addition to the vulvar skin guidelines, figure 2, while one required surgical separation. Three experienced some degree of burning micturation. 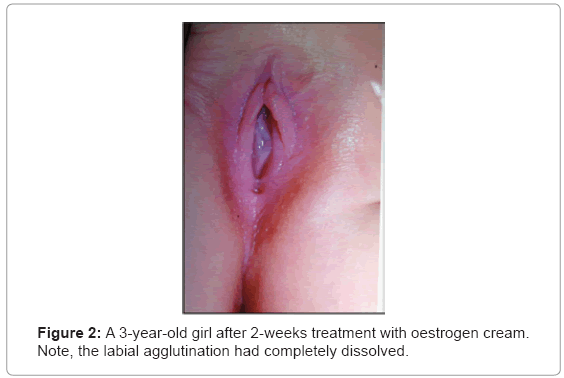 Labial agglutination (Adhesion), also known as fused labia, is a thin membranous fusion of the labia minora or majora of varying length. It originates at the posterior fourchette and progresses towards the clitoris. If complete, the fusion conceals the vaginal opening, however, if partial, the adhesion occurs near the posterior fourchette and clitoris [1-3]. Most children with minor agglutination of the labia are asymptomatic. When symptoms occur, they are often related to the urinary system and interfere with voiding, such as, dysuria or altered urinary stream, or symptoms related to the accumulation of urine behind the agglutination predisposing to vagina or urinary tract infections, requiring treatment [4,5].

The condition is rather common but rarely described. The estimated rate is approximately 0.6 to 3%, with a peak incidence of 3.3% at 13-23 months of age [6]. However, a higher prevalence as great as 38.9% has been reported [7]. The causes of labial adhesion appear to be a mild inflammatory condition in a child with a thin layer of labial epithelial cells secondary to a low oestrogen level. The peak incidence at 12-23 months of age might be a result of the combination of the children’s low estrogen level and irritated skin as in napkin dermatitis. This is quite obvious in our patients.

Labial agglutination resolves spontaneously at puberty in up to 80% of girls and has a 40% recurrence rate after treatment, whether medical or surgical, making no treatment, the best option when patients are asymptomatic. The risk of recurrence can be lowered with good hygiene and reduced irritation, because the condition is believed to develop as a result of low oestrogen level and local irritation.

Symptomatic or complete labial agglutination is treated with topical oestrogen therapy applied twice daily in 1-8 weeks. The success rate differs from 47% to 100%, depending on treatment frequency and length. The recurrence rate of labial adhesion can be up to 41% [10-14].

As an alternative to oestrogen cream, a medium-potency steroid is probably quite a reasonable treatment. Recently, it is documented that the use of 0.05% beta-methasone cream treatment has no adverse effects, and the success rate, was high defined by complete separation of the labia [12].

If the child does not respond to topical treatment, the adhesion can be separated mechanically, e.g., manual separation under topical anaesthesia, however, this may be physically and emotionally traumatic to the patient. In cases of very dense and fibrous agglutination, surgical separation under general anaesthesia is an option; however, this can cause development of fibrous tissue and thicken adhesion [15].

The different treatments have potential side-effects. Topical oestrogen therapy may cause vulval pigmentation, erythema, fine downy labial hair and breast tenderness or transient breast enlargement. In a few cases vaginal bleeding have been reported. To minimize the possibility of side-effects, the oestrogen cream should be applied precisely to the agglutination.

It is important to educate parents in the awareness of the benign nature of the agglutinitis, the causative mechanisms and the natural resolution. Parents should be educated to observe for signs of urinary tract infection and for recurrence of the labial agglutination. Proper technique in the application of ointment must be demonstrated.

The author would like to thank Loida M. Sese for her secretarial assistance.