Labial Impressions: A Tool for Identification

Copyright: © 2014 Bindal U, et al. This is an open-access article distributed under the terms of the Creative Commons Attribution License, which permits unrestricted use, distribution, and reproduction in any medium, provided the original author and source are credited.

Background: First recommendation to use lip prints as one of the tools in the court of law was done by France’s greatest criminologist Edmond Locard. The study was aimed to determine the differences in labial impression among races in Malaysia and to note if there is any change over a time period. Methods: The study recruited 60 subjects, consisted equal ratio of male and female subjects from the three races of Malaysia. The labial impressions of an indian subject was studied over a period of eight years. The lip prints were obtained on the strip of bond paper and was analysed using the Suzuki and Tsuchihashi classification. Results: It was observed that Type II (72.50%) was the predominant pattern in Indian race and the least observed pattern was type III (33.75%). Type I′ (71.25%) was the most common pattern observed in Malays race and the least observed pattern was type I (12.50%). Type III (87.50%) was the most common pattern observed in Chinese and the least observed was type IV (0%). There was no change in lip print pattern over a period of eight years. Apart from the features mentioned according to the classification some additional features were noticed and these features were consistently followed and there was no changes observed over a period of eight years. Conclusion: The lip prints have potential in determining the race and sex of an individual. Since lip prints is different in every individual, so it can be used as a method for personal identification which may give contributions in crime scene investigations.

On May 12, 1999, an Illinois Appellate Court accepted, in People v. Davis, No. 2-97-0725, the uncontroverted testimony of two state police experts (a fingerprint examiner and a questioned document examiner) that: lip print identification is acceptable with in the forensic science community as means of positive identification. The lip print identification methodology, although seldom used, is very similar to fingerprint comparison which is well known and accepted form of scientific comparison. In the forensic science community, there is no disagreement regarding the methodology or the fact that lip prints provide a positive identification. The F.B.I and Illinois state police consider that the lip prints are unique like fingerprints and are a positive means of identification. The fingerprint examiner, working on her first lip print case, was able to verify and testify to these facts, and that the questioned document examiner found at least 13 points of similarity between a standard and the partially blurred questioned print and determined that they matched.

(1) An empirical proof of the study of lip characteristics showing their individuality.

(2) The manner in which lip prints are like fingerprints in that no friction ridge characteristics--the basis for fingerprint individuality-- exist on human lips.

(3) The methodology to be used in lip print comparisons which has supposedly been accepted in the forensic science community.

(4) Characteristics of lip prints which are to be used in comparing known standards and crime scene prints.

(5) A source that confirms the positions of the F.B.I. and the Illinois State Police as endorsing the principle of lip print uniqueness as a means of positive identification [3].

The lip prints were least studied among the Malaysian population so the study was aimed to collect the data of the patterns of lip prints prevailing in the population which will help in recognition of the individuality.

The permanence of the lip prints is been studied in the past for one year [4] but for a maximum of 3 years. Present study was aimed to evaluate the permanence of lip prints over long duration of time and to observe changes if any, due to the influence of factors like age, environment and diet.

The study recruited 60 subjects, consisted equal ratio of male and female subjects from the three main races of Malaysia. Materials used in the study were a dark colored frosted lipstick, thin bond paper (4″×10″) and two clips. A (4″×10″) strip of thin bond paper was fixed on the cardboard of the same size with the help of the clips. The paper was then labeled with the name, age, sex, occupation and address of the subject to be filled after taking the lip prints. The prints were analyzed by using magnifying glass and were assessed using the Suzuki and Tsuchihashi classification. The labial impressions and anthropometric measurements (8) of lips of an Indian subject were studied over a period of nine years. For the purpose of the measurement simple ruler scale was used and the measurements of the prints were taken. Care was taken that the lips prints were in normal shape and size. Each measurement was repeated three times to avoid any errors. 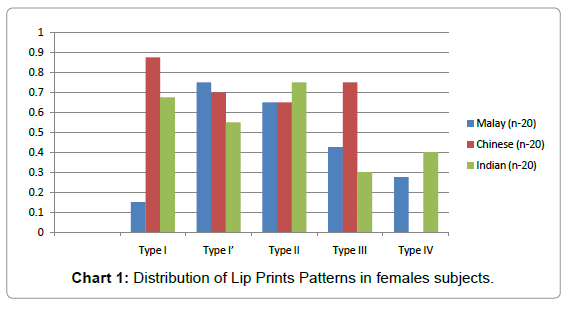 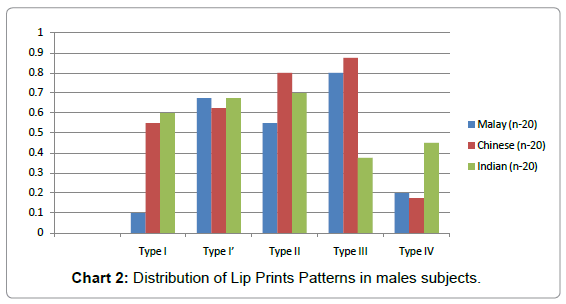 The comparison of the two lip prints (Figures 1 and 2) taken after an interval of eight years suggests no change in the patterns of the grooves. It was further observed that there was no change in the additional noted features in all four quadrants. The anthropometric measurements (Table 2) of the lips suggest slight variation in the measurement of the upper lip. The other measurements were same in both lip prints. Suzuki and Tsuchihashi were the pioneers in the development of cheiloscopy and made a significant contribution to the field of crime investigation. Several studies over the years justified the importance and application of lip prints in identification which helped in successful convictions.

The lip prints of parents and children and those of siblings have shown similarities in few studies [6,7]. The studies conducted by Suzuki and Tsuchihashi on 280 Japanese individuals and Bindal et al. [4] on 300 North Indian individuals concluded that every individual have unique lip prints. The present study on 60 subjects observes the same findings as observed by Suzuki and Tsuchihashi.

In the present study, the lip prints were analyzed according to Suzuki’s classification and the results revealed, there was significant difference in lip prints among Malays, Chinese and Indian. The present study revealed that the predominant pattern of lip prints for Malays race was type I’. Similar finding was observed by Neo Xiao Xu et al. [8,9]. The most frequent type for Chinese race observed in the present study was type III which differ from the study done by Neo Xiao Xu et al. [9]. This suggested type I as the most predominant pattern in Chinese race. Indian races on the other hand, the present study found that the most observed pattern was type II which supported Bindal et al findings that males and females of North Indian studied having type II groove as the most frequent lips pattern but did not match the findings observed by Neo Xiao Xu et al. [9] that Indian races in Malaysia has type I as predominant type of lip grooves. Based on the results from the present study which revealed that three races in Malaysia which are Malays, Chinese and Indian have different type of labial impression.

The results also showed that there was a significant difference of lips patterns found between males and females which agreed with the findings of Sonal et al. [10], Gondivkar et al. and Sharma et al.) [11,12]. The present study revealed that only Malays and Chinese have significant difference in the lip grooves of males and females. Malay males showed that type III as the most observed lip pattern meanwhile Malay females predominant type of lip grooves was type I’. Besides that, Chinese males recorded type III as the most observed pattern compare to Chinese females who showed type I as predominant type of lip grooves. Based on this results, we can concluded that males has type III as their predominant type of lip grooves patterns meanwhile females showed that the most observed lip patterns in females was either type I or type I’. Therefore, lip print is a potential and reliable method which is useful in determining sex and race of an individual. Sonal et al. [10] concluded in their study that certain pattern trend of lip print prevalent in either male or female. The present study observes near similar patterns in both males and females as concluded by Saraswathi et al. and Verghese et al. [13,14]. The present study suggests that smudging of lip prints present mainly in males lip prints especially in the upper quadrants which may be due to facial hair as reported by Saraswathi et al. [13]

The present study concludes that lip prints had potential in determining the race and sex of an individual. Since lip prints are different in every individual, it can be used as a method for personal identification which may give contributions in crime scene investigations. In order to substantiate the permanence of lip prints, a study on the lip prints of a person should be performed from birth till death to label that lip prints don’t change during the life time. The presence of additional features should be considered in each quadrant, as they can affect the decision making while judging the identity of an individual.