+44-1647-403003
Laimerandrsquo;s Diverticulum, A Rare True Diverticulum Inferior to the Cricopharyngeus: Report of a Case and Review of the Literature | OMICS International

Laimer’s Diverticulum, A Rare True Diverticulum Inferior to the Cricopharyngeus: Report of a Case and Review of the Literature

Copyright: © 2014 Nguyen D, et al. This is an open-access article distributed under the terms of the Creative Commons Attribution License, which permits unrestricted use, distribution, and reproduction in any medium, provided the original author and source are credited.

The patient is a 46 year old male presenting with six months of persistent cough and coughing up food remnants shortly after consumption. We proceeded with standard diagnostic testing including barium swallow, esophagogastroduodenoscopy, and esophageal manometry to determine the etiology of these symptoms. Based on these findings we determined the need for surgical intervention.

Esophagogastroduodenoscopy (Figure 1) and barium swallow (Figure 2) and showed a proximal esophageal diverticulum erroneously diagnosed as Zenker’s diverticulum. Manometric studies were not possible due to preferential insertion of the manometry probe into the diverticulum. 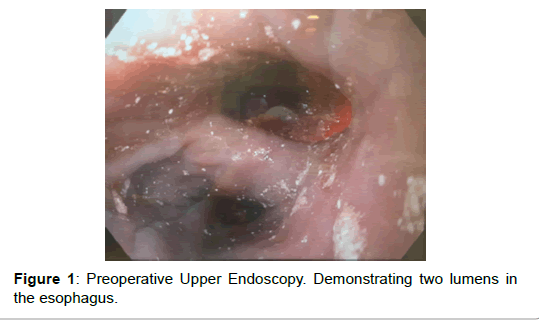 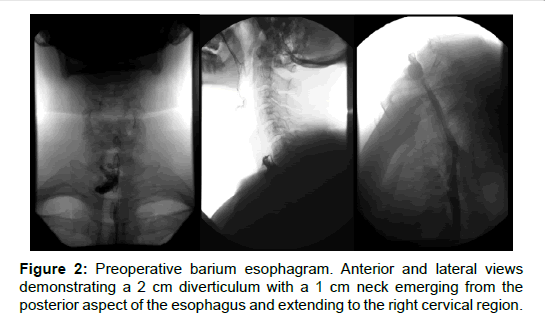 Figure 2: Preoperative barium esophagram. Anterior and lateral views demonstrating a 2 cm diverticulum with a 1 cm neck emerging from the posterior aspect of the esophagus and extending to the right cervical region.

The patient underwent a hypopharyngeal diverticulectomy and cricopharyngotomy via a left neck approach.

This procedure began with a left transcervical approach. Once adequate exposure of the deep neck structures was obtained, endoscopy was performed to clearly identify the esophagus and diverticulum. There were several features that made this diverticulum distinct from a Zenker’s diverticulum. First, this diverticulum had a wide neck (Figure 1). Second, it was covered by esophageal muscle. Third, it emanated from below the cricopharyngeus (Figure 3) in Laimer’s Triangle. Figure 3: Intraoperative image of dissected neck and diverticulum. Exposure of the esophagus with posterior diverticulum dissected and brought into surgical field.

The diverticulum was carefully dissected free from surrounding tissue, and a myotomy was begun just distal to the inferior margin of the diverticulum and extended 3 cm distally. A 60 French bougie was placed in the lumen of the esophagus and the diverticulum was excised using a 30 mm TA linear stapler using 3.75 cm staples (blue load). The staple line was covered with esophageal muscle using interrupted 4-0 vicryl sutures. A Jackson Pratt drain was placed along the staple line and the wound was closed.

The patient was kept NPO for 5 days, after which a barium esophagram showed normal swallowing, normal esophageal contour, and no evidence of contrast extravasation (Figure 4). Diet was advanced as tolerated and the Jackson Pratt drain was removed once daily output was below 15 ml. The patient was discharged on postoperative day 5 on a mechanical soft diet. 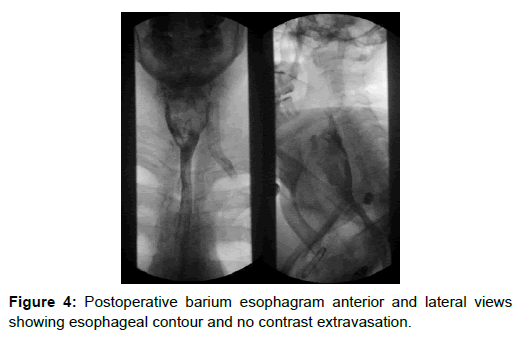 On 4 week follow up, patient was tolerating a regular diet, having minimal dysphagia and no complaints of persistent cough or coughing up food remnants after eating. 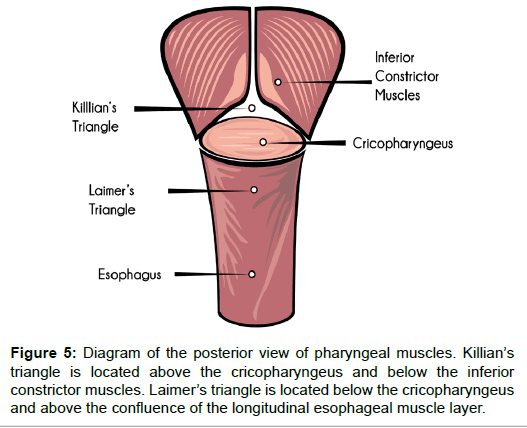 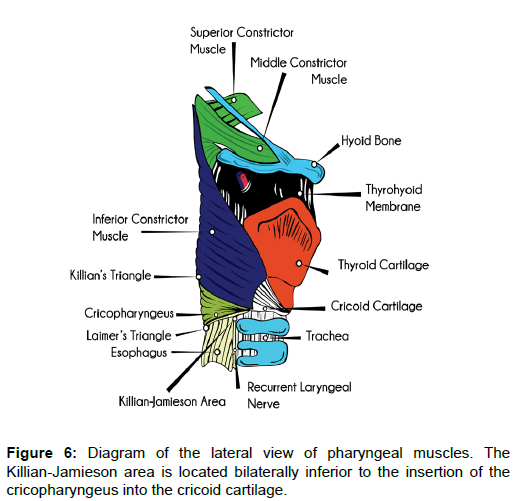 Figure 6: Diagram of the lateral view of pharyngeal muscles. The Killian-Jamieson area is located bilaterally inferior to the insertion of the cricopharyngeus into the cricoid cartilage.

Laimer’s diverticulum is an extremely rare hypopharyngeal posterior midline true esophageal diverticulum inferior to the cricopharyngeus muscle. The low incidence of this phenomenon leaves the etiology and most efficacious treatment unclear, though there is support for a pulsion mechanism secondary to an esophageal dysmotility disorder. We recommend manometric studies to identify motor dysfunction and a left transcervical pharyngomyotomy and diverticulectomy for these patients.