Left Atrial Mass in a Patient with Rheumatic Mitral Stenosis and Atrial Fibrillation-Thrombus or Myxoma?

A 38-year-old female presented for evaluation of dyspnea on exertion. She also complained of palpitations but gave no history of edema, chest pain, cardioembolism, fever, arthralgia or weight loss. She was in atrial fibrillation (AF) with a controlled ventricular rate. Cardiac auscultation revealed a loud S1 with an opening snap and a mid-diastolic rumbling murmur at the apex. There was no presystolic accentuation and no postural variations. Transthoracic echocardiogram revealed thickening and restricted motion of mitral valve leaflets associated with doming of anterior mitral leaflet and severe subvalvular deformity. Mitral valve area was 0.8 cm2. These findings were consistent with severe rheumatic mitral stenosis (MS). Left atrium (LA) was dilated with a large spherical mass (50 mm × 46 mm) originating from the interatrial septum, occupying more than two-third of LA (Figure 1). This mass was immobile and non-pedunculated with no stalk visible even on transesophageal echocardiography. It was characterized by multiple echolucent areas interspersed in an echogenic background. LA appendage was clear. The size, location and echogenecity suggested it to be a myxoma while the mobility and absence of stalk in the presence of rheumatic severe MS and AF suggested it to be a thrombus. We gave a trial of oral anticoagulation for 6 weeks but there was no regression in the size. Mitral valve replacement with surgical excision of mass was eventually performed. Gross examination of the resected LA mass revealed soft, gelatinous tissue with areas of haemorrhage (Figure 2). Histopathology confirmed it to be a myxoma (Figure 3). A cardiac mass in association of rheumatic MS and AF is much more suggestive for a thrombus than a myxoma. This case highlights the diagnostic dilemmas in such a rare co-existence of atrial myxoma and rheumatic MS [1]. Histopathology will always be the gold standard in such situations [2]. 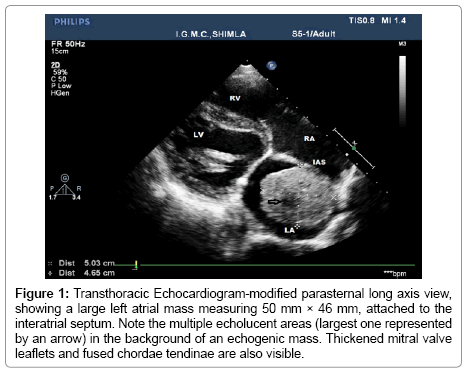 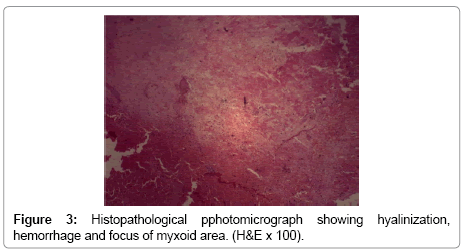