2Faculty of Health and Science, Institute of Learning and Teaching, University of Liverpool, UK

Copyright: © 2016 Alalawi F, et al. This is an open-access article distributed under the terms of the Creative Commons Attribution License, which permits unrestricted use, distribution and reproduction in any medium, provided the original author and source are credited.

Intra-abdominal and biliary infections are significant cause of morbidity and mortality for the transplant recipients, specifically in the early post-operative period, reflecting substantial immunosuppression. In renal transplant recipients, there is no reported increased risk for pyogenic liver abscess as compared to general population. The diagnosis of hepatic abscess in a transplant recipient can be challenging since presentation could be atypical and the signs and symptoms might be insidious and subtle. If a hepatic abscess is missed and left untreated, it is potentially lethal; hence, an early diagnosis and timely initiation of appropriate therapy is of utmost importance, to improve patient outcomes.

We present a case record of a 29 year old male patient who received a living unrelated renal transplant in 2007. He presented 8 years post-transplant with a fever of unknown origin; clinical and laboratory tests did not provide any clue to the diagnosis. However, labeled white cell scan (Leukoscan) followed by abdominal ultrasound scan (USS) revealed an unexpected finding of a large liver abscess (5.57 × 6.05 cm). He responded well to a course of antibiotics including metronidazole therapy besides requiring percutaneous abscess drainage.

We present a case record of a transplant recipient who presented with fever of unknown origin, subsequent imaging revealed unexpectedly large hepatic abscess.

This 29 years old male patient had renal transplantation in 2007 from a living, unrelated donor. His maintenance immunosuppression was a combination of cyclosporine, prednisolone and sirolimus. He developed new onset diabetes after transplant (NODAT) and had been on regular follow-up with a baseline serum creatinine level of 1.5 mg/dl.

He presented to the emergency department in July 2015 with a history of high-grade fever for 5 days duration associated with rigors. He denied any history of a sore throat, cough, abdominal pain, rash, dysuria, diarrhea or any other relevant symptoms. There was no history of contact with sick patients. However, 2 months prior to this hospital admission he accompanied his father on a trip to India.Clinical examination was unremarkable apart from a high-grade fever of 39.9°C.

The patient was started empirically on antibiotics (initially ceftriaxone, altered later to Piperacillin/Tazobactam), yet his fever remained unabated. Since the source of sepsis could not be localized, he underwent isotope leukoscan (Tc99m labeled granulocyte scan) (Figures 1 and 2). USS of the abdomen displayed normal appearances of the kidney allograft with an incidental finding of a focal lesion in the right liver lobe; measuring 5.57 × 6.05 cm, suggestive of a hepatic abscess (Figures 3 and 4). 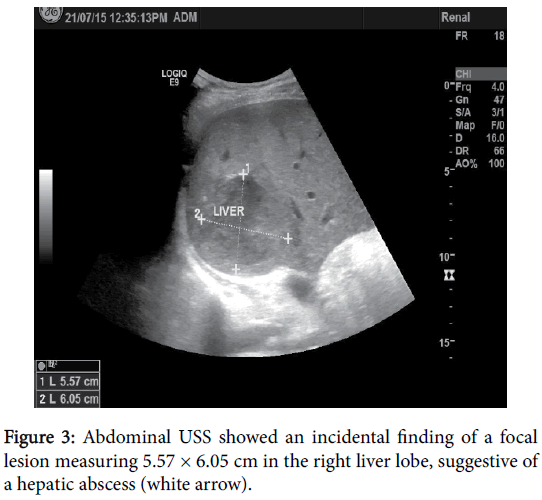 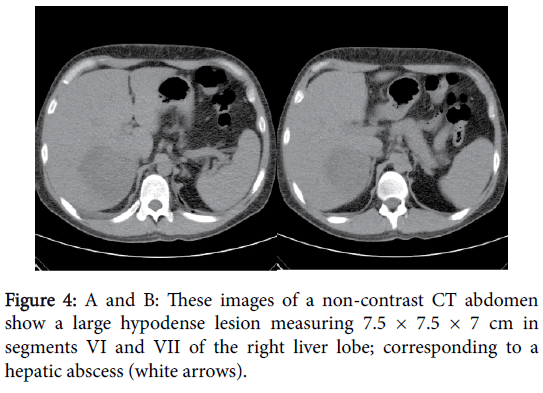 Figure 4: A and B: These images of a non-contrast CT abdomen show a large hypodense lesion measuring 7.5 × 7.5 × 7 cm in segments VI and VII of the right liver lobe; corresponding to a hepatic abscess (white arrows).

Given his persistent fever, antibiotic therapy has been changed to Meropenem® and Metronidazole was added considering his recent travel to an endemic area with amoebiasis, although the organisms were not isolated. USS guided percutaneous drainage was performed due to the considerable size of the abscess with good clinical response and relief of the fever. Culture and sensitivity for the drained pus were reported negative for any organism including acid-fast bacilli.

We did not alter immunosuppression as the patient responded well to the treatment plan. The patient’s condition improved significantly, and he was discharged on antibiotics for a total of 4 weeks.

Infection is the second most common cause of morbidity and mortality in the transplant recipients. The risk of infection is determined by the length of exposure to infectious agents (hospital or community sources) and overall immunosuppressive levels. The final immunosuppression status is affected by dosage, duration, timing of transplant and choice of immunosuppressive medications, presence of metabolic conditions such as diabetes mellitus, and existence of immune-modulating viruses [1,2].

Intra-abdominal and biliary infections are expected especially in the first year post-transplantation, reflecting heavy initial immunosuppression regimen in the form of induction and maintained therapy, although infections can occur at any time thereafter [1,2].

Among these infections is the development of liver abscess, which could be pyogenic, amoebic, tuberculous, or rarely (in severely immune-compromised patients) fungal.

The timing of the transplant is critical in determining the causative organisms. For instance, those recipients who shortly had an abscess after receiving the induction therapy and have had a complicated medical, surgical, and immunological postoperative course, then Fungi (e.g. Aspergillus, Candida, and Mucorales species) as causative organisms were implicated, reflecting their heavy immunosuppression status. In contrast, chronically immunosuppressed (otherwise healthy recipients); abscesses are usually caused by non-fungal organisms; e.g. a pyogenic bacterial abscess, Nocardia, Toxoplasma species, TB and amoebiasis), this could be explained by the fact that posttransplantation immunosuppression primarily impairs T-cell rather than B-cell functions [3-5]. 70% of hepatic abscesses are solitary, and the right liver lobe is affected in 95% of these cases [4-7].

Microbiology of pyogenic liver abscesses demonstrated that 50% were gram-negative organisms, 25% were gram-positive, 10% were anaerobic organisms and 15% of cultures were sterile. Approximately 15% to 20% of abscesses have more than one organism (Polymicrobial infections) [2-9]. Escherichia coli and Klebsiella pneumoniaeare the most common pathogens. E-coli are the most common organism isolated in Western countries, whereas K. pneumoniae is commonly isolated in diabetic patients in Taiwan. Enterococcus , Staphylococcus aureus , Streptococcus faecalis , Streptococcus milleri and Viridans and anaerobes such as Bacteroides species are increasingly common. Unusual organisms are not uncommon in transplant recipients; Desir et al. had isolated H. parainfluenzae in a kidney transplant patient with polycystic kidney disease in a native liver cyst [10]. Additionally multidrug resistant bacteria are commonly seen in organ transplant recipients [6-9]. In contrast to pyogenic abscesses, an amoebic abscesses are common in countries with endemic amoebiasis and suboptimal healthcare such as Mexico, India, East and South Africa, and parts of Central and South America [3,11], hence, it should be considered in residents of and travelers to these endemic areas, where drinking water is contaminated by E. histolytica [3,4,11].

Amoebisis can disseminate through a hematogeneous route, thus liver abscesses are by far the most common extra-intestinal manifestation of invasive amebiasis. Amebic abscesses are usually single and are normally located in the right hepatic lobe, though multiples lesions can rarely occur, but they are infrequently reported [11,12]. Moreover, amoebic abscess is 10 times more common in men than in women while there is no gender predilection for a pyogenic abscess.

Tuberculosis after solid organ transplantation remains unusual with a variable incidence that can reach up to 15% in endemic areas of the transplanted recipients [1,3]. Non-tuberculous mycobacterial infections can be encountered too in immunosuppressed individuals, commonly Mycobacterium avium complex followed with Mycobacterium kansasii [13,14].

Diabetes mellitus, low serum albumin, and cytomegalovirus seropositivity are all risk factors for bacteremia and hence liver abscess formation; our patient was diabetic [9].

In our young patient, the most likely diagnosis was one of a pyogenic abscess. Sterile culture probably is related to previous antibiotic therapy. However, an amoebic abscess could not be ruled out, considering his recent travel history to an endemic area of amoebiasis (India), but the organism was not isolated, hence we treated him for both.

The classic triad of fever, right upper quadrant pain with tenderness and jaundice on clinical examination is usually suggestive of the diagnosis, however; they are rarely observed now, making the diagnosis difficult especially in immunosuppressed patients. Clinical signs, symptoms, and laboratory tests including liver test abnormalities do not help to distinguish amoebic from pyogenic liver abscesses. Serology for antibodies to E. histolytica is useful to determine current or past infection [2,6,7,15,16].

As a diagnostic tool, ultrasonography is the primary imaging modality for evaluating potential liver abscess, with accuracy and sensitivity ranging from 80 -100%. Alternatively, CT scanning has sensitivity similar to USS, and is usually performed to establish the number of abscesses, which can be difficult on USS [2-6,11,15]. Magnetic Resonance Cholangiography is indicated in patients with biliary symptoms, obstructive liver function tests or radiological evidence of cholelithiasis or bile duct dilatation [8]. Diagnostic and therapeutic transcutaneous aspiration is performed under ultrasound or CT guidance, and the aspirate should be sent for culture and cytology.

Management in transplant recipients is not different to nontransplanted patients [4,16]. Treatment involves antimicrobial therapy with or without percutaneous or surgical drainage.

Diagnostic aspiration of abscess fluid, ideally under image guidance, with subsequent culture can guide antibiotic choice. Failure to culture pathogenic organisms can be attributed to previous antibiotic treatment or inadequate anaerobic culture. The antimicrobial agent should provide adequate coverage against aerobic gram-negative bacilli, microaerophilic streptococci, and anaerobic organisms, including Bacteroides fragilis. Usually, a combination of two or more antibiotics is given.

Metronidazole and clindamycin have wider anaerobic coverage and provide excellent penetration into the abscess cavity. A thirdgeneration cephalosporin or an aminoglycoside provides adequate coverage against most gram-negative organisms; however, the use of aminoglycosides in renal transplant recipients should be preserved for severe resistant cases when benefits outweigh the risk. Fluoroquinolones are used as an alternative for patients, who are allergic to penicillin, extended-spectrum beta-lactamase (ESBL) resistant bacteria needs to be treated accordingly. Antimicrobial therapy should continue for 4 to 6 weeks [2,4,6,15,17]. If an amoebic abscess is suspected; then treatment with Metronidazole for 10 days is required [15,16].

Occasionally, there is difficulty to distinguish between pyogenic and amoebic abscesses; in such cases, anti-amoebic therapy is advised in addition to broad-spectrum antibiotics [6].

Renal transplant recipients traveling to areas endemic for amoebiasis should be counseled to avoid ingestion of potentially contaminated food and water. Boiling water before use is essential to destroy E. histolytica cysts [16].

Drainage of the abscess

By percutaneous aspiration guided by ultrasonography or computed tomography, with or without placement of a drainage catheter, is frequently required [2-4,6-9,16]. Small abscesses can be treated with antibiotic therapy alone.

Residual liver abscess can persists in 5–28% of the cases, independently of the treatment modality (medical or medical/ drainage). Of these cases; residual abscess have been noted to persist up to 36 months and even longer in asymptomatic individuals. Follow up with ultrasound scanning should be done in these cases [18,19].

If left untreated, pyogenic liver abscess will increase mortality rate to reach 100%, nevertheless, with current therapy and early diagnosis, the incidence can be reduced significantly to 15-20% [2,6].

Diagnosis of hepatic abscess in the transplant recipients is challenging since presentation could be atypical.

Therapeutic management of hepatic abscess in transplant recipients is similar to non-transplant patients.

If there is difficulty to distinguish between pyogenic and amoebic abscesses, then anti-amoebic therapy should be considered, in addition to antibiotics.