Copyright: © 2014 Kubicki A, et al. This is an open-access article distributed under the terms of the Creative Commons Attribution License, which permits unrestricted use, distribution, and reproduction in any medium, provided the original author and source are credited.

Motion analysis processes are commonly used in the field of motion neurosciences, both with healthy and pathological subjects. Actually, the most used and validated system is the Vicon® (Oxford Metrics Group). This very accurate motion analysis system fits perfectly with laboratory contexts, but its usefulness in a clinical environment is more critical. Indeed, this device is very cumbersome, not wearable and not easy to use for clinicians. To counteract these difficulties in motion clinical analysis, some new innovative devices were proposed in the last years, more wearable, user-friendliness, low-cost, and able to record some interesting kinematic parameters. To test the accuracy of one of these systems, we compared the FX-Move® analysis with that of the Vicon®. To do this we asked three subjects to do slow and fast upper-limb reaching movements, and plotted both FX-Move® and Vicon® velocity measurements to calculate the concordance of their results. This analysis revealed a high accuracy between systems, but only until a maximal velocity threshold of 4 ms-1. Spearman coefficients were higher for data recorded for slow movements, under to the 4 ms-1 threshold (Mean r2 was 0.992 for the 3 subjects) than for data recorded for rapid arm raising movements, up to the 4 ms-1 threshold (Mean r2 was 0.715 for S1 and S2). According the well-documented motor slowing-down of impaired patients, we suggest that this motion analysis device could be used in a clinical context.

New motion capture technologies provide numerous assessments in the field of movement sciences. Since the Nineties, numerous papers were published using body motion capture devices like the Vicon® system. In the neurosciences field, a lot of papers were published to better understand the central nervous system from a behavioral point of view, assessing for instance, the head stabilization during dynamic tasks [1], or the brain ability to optimize the gravitational force during arm movements [2]. In the clinical field, these studies aimed to assess kinematics parameters with patients suffering from multiple deficiencies, and there results have allowed some interesting highlights in rehabilitation practices [3,4]. In case of motor functions disabilities linked with aging, several stimulating studies showed motor control impairments, with interesting implications for balance deficits understanding, using this technology [5,6].

The main brake to extend this kind of assessment in a clinical context is the equipment cost. Most of accurate 3D motion analysis systems are very expensive, and that is incompatible with most of the rehabilitation center financial capacities. Moreover, this kind of device is really difficult to use in an ambulatory context, because of their poor portability [7].

In this context, we propose to test a low cost solution, more portable and able to measure the marker coordinates in real time. The aim of this study is to assess the accuracy of these measurements, by comparing them with those of the Vicon®` system.

FX-Move description FX-Move device is composed of two independent parts: one active infrared light source (LED), and one electronic board with a camera sensor to perform image acquisition and image processing, and to establish human-machine control interfaces. The system has been developed for public application purpose, and satisfies multiples conditions such as low-cost, user-friendliness, flexibility, portability, and less cumbersome. It realizes image processing in real-time to improve human-machine interactive quality. 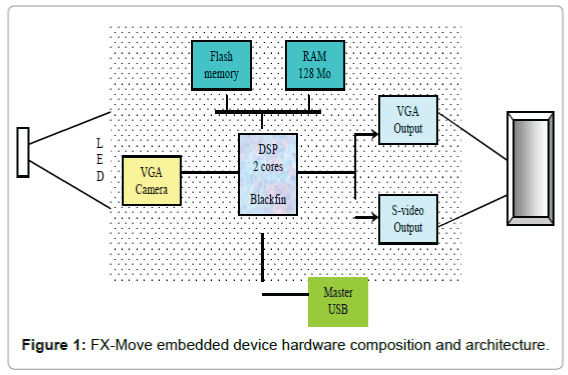 • Handle that generates infrared light such as a small active marker,

• VGA output or S-video output interface between the DSP and the screen,

• Master USB allowing external peripheral interfaces, such as Bluetooth and the force plate for posture-kinetic assessment.

Low-cost Digital Signal Processor DSP Blackfin possesses double computation cores: A and B. For the core A, a C++ application using Linux μC Analog Device distribution has been developed in order to implement SDL (Graphic Library) layer. Embedded image processing chain has been realized onto the core B.Figure 2 illustrates 3 steps of the image processing chain. Firstly, for each frame, original image is captured by the VGA camera with a pass-infrared filter; active marker generates pixels with high graylevel. The image segmentation processing by thresholding allows us to obtain binary image (white and black). Then, image filtering is performed to improve maker image quality and this facilitates maker detection. Finally, the center of the detected marker is computed. For a video sequence, coordinates of each frame (x, y) are stored in order to determine both the horizontal and the vertical positions of the marker.

Experimental procedureThree subjects were recruited, two mans (30 and 50 years) and one woman (50 years). They were asked to perform 18 reaching movements towards a target (yellow ball) appearing on the screen. These 18 trials were composed of two blocks of movements. For the warm-up, subjects were asked to reach their arm “slowly” for 9 movements. For the highvelocity block, they were asked to reach with their maximal speed. The two blocks were performed consecutively, in this order. We choose a number of 9 trials to obtain, in the fast condition, the higher velocity of each participant. Indeed, fast motor learning have been reported in healthy subjects in a very few trials [8]. Even if some fatigue was involved at the end of this fast block, our only aim was to obtain the maximal velocity of the subjects to plot these trials in the tested relationships.

Statistical analysisTo compare FX-Move and Vicon® measurements, we collected the maximal velocities given by each of this system for a same movement. There were 18 movements by subjects, and 3 subjects, then 108 data. Shapiro-wilks tests showed non-normality of our velocity distributions (this non-normality is logical since there were two blocks of movements: one at slow velocity and one at rapid velocity). Then we applied Spearman coefficient calculation to correlate Fx-Move and Vicon® measurements. Between-systems errors were analysed in function of Maximal Speed Vicon® measures by a Bland and Altman chart [9,10] (Figures 3 and 4). 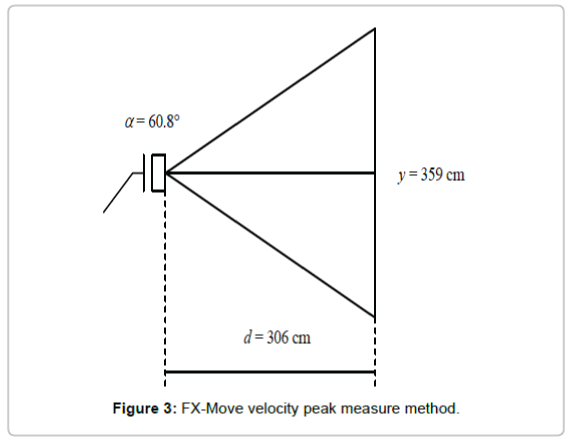 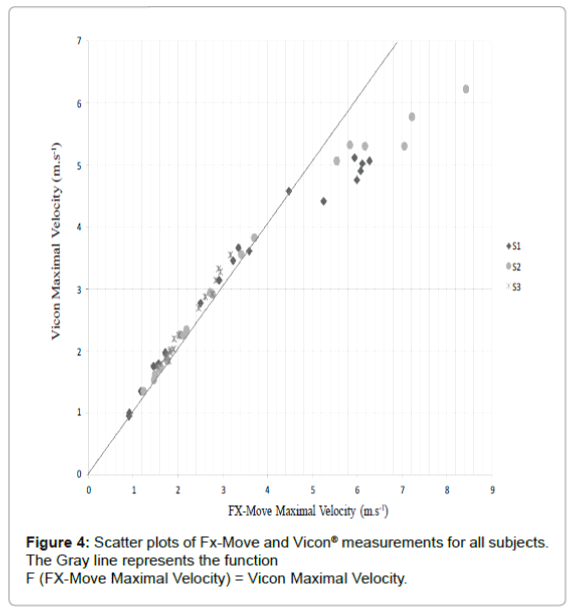 In order to test and validate FX-Move device performances, we confront two collected data set: FX-Move and Vicon®. To do this, we plotted all data on a chart and measured the spearman coefficient.

For all subjects, the Spearman coefficient (r) was significant (r=0.992; r2=0.984). This significant Spearman coefficient shows that Fx-Move and Vicon®systems give the same maximal velocity measurement for a movement. However, we can see on chart that data plotted under 4 m.s-1 follows a linear distribution (near from the y = x line), but data plotted up to 4 ms-1 seems far from this line.

Then we propose to plot the differences between systems in function of the maximal velocity measured by the Vicon® in a Bland and Altman chart. On Figure 5, we can see the cutt-off from 4 ms-1: Up to this velocity, measurements from the Fx-Move were higher than measurements from the Vicon®. We observe also on this figure that more the movement velocity increases, more the error made by Fx- Move system is important. 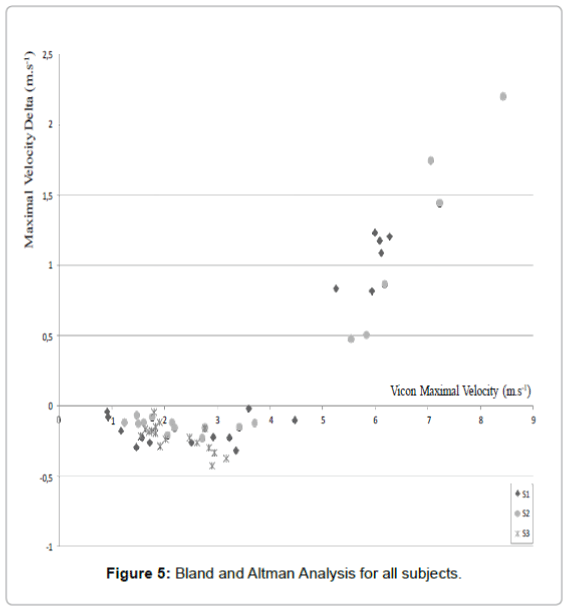 Figure 5: Bland and Altman Analysis for all subjects.

In order to conform above analysis results, we also performed individual Spearman coefficients by subject (Figure 6). It is to note that all the 18 hand movements performed by the subject S3 present velocity measurements inferior to 4 ms-1.As we can observe on this last figure, Spearman coefficients were higher for data recorded for slow movements (Mean r2 was 0.992 for the 3 subjects) than for data recorded for rapid arm raising movements (Mean r2 was 0.715 for S1 and S2). Altogether, these results suggest an acceptable accuracy of FX-Move records only for slow movements (< to 4 m.s-1).

Figure 6: Correlation between Fx-Move and Vicon® measurements for individual subject.

In this study, we compared the FX-Move measurements with those of the Vicon®system. Our results show a high accuracy of this device until a maximal velocity threshold of 4 meters by second.

The FX-Move is equipped of a CMOS VGA image sensor of 60 fps, this corresponds to a frequency of 60 Hertz for image capture. In relation to Vicon® one (200 Hz), for rapid movement, FX-Move doesn’t capture and record correctly kinematics parameters because of the under-subsampling phenomenon [11].Our objective was to test an alternative device more useable for some clinical circumstances. Our results showed that this analysis is accurate if movements are relatively slow (< to 4 ms-1). This slow velocity is not compatible with the assessment of arm motions in the healthy population, or in sport fields, since people are able to reach quite rapidly, until 10 ms-1 or even faster for high-level athletes [12]. However, impaired patients met in a clinical context do not usually reach with arm velocities up to 4 ms-1. For instance, this is the case for both the post-strokes population [13,14] or the elderly population [15,16]. Then, this kind of wearable motion analysis system could be interesting in the field of motor assessment in the clinical context. Indeed, clinicians have to assess the motor impairments of their patients with clinical tests as, for an upper limb example, the nine blocks test [17]. Even if these clinical tests are validated and really interesting, an automated measurement could be more sensitive to the patient evolution. New devices, like the FX move®, possess multiple advantages for public application purpose, such as low-cost, user-friendliness, flexibility, portability, and less cumbersome. Nevertheless, taking into account the highlights of our preliminary results, other studies have to be done to verify the accuracy of this system in a clinical context with frail older adults or further impaired patients.