ISSN: 2167-0919
Journal of Telecommunications System & Management
Make the best use of Scientific Research and information from our 700+ peer reviewed, Open Access Journals that operates with the help of 50,000+ Editorial Board Members and esteemed reviewers and 1000+ Scientific associations in Medical, Clinical, Pharmaceutical, Engineering, Technology and Management Fields.
Meet Inspiring Speakers and Experts at our 3000+ Global Conferenceseries Events with over 600+ Conferences, 1200+ Symposiums and 1200+ Workshops on Medical, Pharma, Engineering, Science, Technology and Business

LTE-Advanced network is commercially available at increased speed while LTE is upgrading day by day and helped to provide faster broadband services. LTE delivered all these enhancement by offering the state of the art combination of new air interface base technology (OFDMA/SC-FDMA) and greater flexibility for utilizing spectrum. As we know that LTE has flexibility of bandwidth selection and it goes up to 20 MHz bandwidth (BW). Due to this flexible nature, it can accommodate many users with permutation and combination of bandwidth allocated to operator. LTE-Advanced is required for higher data rates and full coverage in future scenario. One of the key features of LTEAdvanced is carrier aggregation. All operators are moving towards Carrier Aggregation as this feature helps to maintain the quality of network and increase the user experience in terms of data rates and peak user throughput. This paper highlights the carrier aggregation which supports the inter-band aggregation contiguous component carriers, intraband aggregation non-contiguous component carriers and inter-band aggregation. This paper also focuses on various scenario of implementation of Carrier Aggregation and there benefits in network.

LTE-A has been specified in Release 10 and onwards. LTE-A is standardized by 3GPP in March, 2012. One of the main leads of the technical enhancements for LTE-A development has been IMT-Advanced. ITU initiated the IMT-A process for defining the requirements for the next generation of Radio Interface Technologies that were released in a circular letter in early 2008. The first LTE Advanced specifications [1] are expected to be frozen in early 2011 while evaluations conducted by 3GPP contributors and external parties have demonstrated that LTE-A meets all the IMT-Advanced requirements [2,3]. The target data rates or throughput in the downlink is 1 Gigabits per second for LTE Advanced. There is no possibility of improvements in spectral efficiency and to provide the required throughput rates within the maximum 20 MHz channel (Maximum achievable data rate is 400 Mbps theoretically, 250-270 Mbps practically, with 4 × 4 MIMO). The higher data rates can be achieved by increasing the overall bandwidth (>20 MHz). IMT Advanced provided the upper bandwidth limit at 100 MHz (20*5 MHz). The Figure 1 describes the different data rates for multiple technologies i.e. for WCDMA, maximum data rates we can achieve is 5 Mbps, HSDPA 15+ Mbps, LTE 200+ Mbps and LTE-A 750+ Mbps (4 × 4 MIMO). 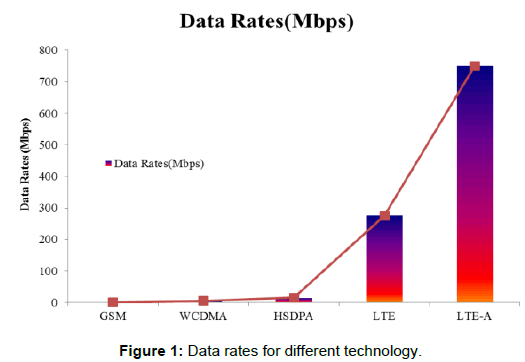 With Carrier aggregation more spectrum band width is allocated per connection, which results directly in higher peak and practical data rates. Since it is important to keep compatibility with R8 and R9 User equipment, the aggregation is based on R8/R9 carriers also [4,5]. Carrier aggregation can be used for both FDD and TDD networks. The key aspect of the carrier aggregation is to provide the ability to transmit data to single UE on the two or more bands simultaneously [1,6,7] as shown in Figure 2. 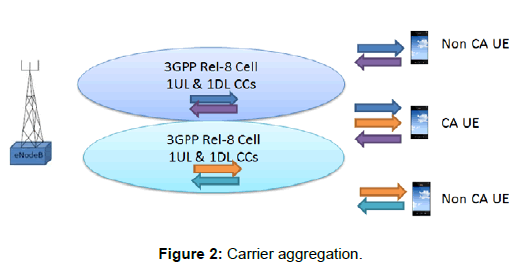 In Release 10, maximum 5 Component carries are supported but most of the operators limited to 2 CCs. The maximum aggregated bandwidth supported in this release is 40 MHz. In Release 11, maximum aggregated bandwidth remain same i.e., 40 MHz but also supports multiple timing advances. In Release 12, 5 Component carries are used and maximum bandwidth increased to 50 MHz. So with carrier aggregation we have multiple physical layers and aggregated MAC layers. MAC layer also support cross-carrier scheduling in this release.

In the Figure 3, Contagious Intra Band CA, BW more than 20 MHz is used for component aggregation. It is not popular scenario for allocation of carrier. The central frequency spacing of contagious aggregated carrier is always in multiple of 300 kHz [8].

In Figure 4, Non-contagious intra band carrier aggregation, multiple component carrier belongs to same band are used in noncontagious manner. This is helpful for those operators and countries were the contagious bands are not available for example European countries and North America region [9,10].

For intra Band CA there are several technical challenges, especially for a UE. From RF perspective, intra-band contiguous aggregated carriers have similar properties as a corresponding wider carrier being transmitted and received. Release 10 requires more stringent linearity requirements on the power amplifier than Release 8/9. UE will need to use less transmitter power for the amplifier to remain in the linear region [3]. Use of multiple CC on UL should be optional and only used for cases where UEs are not at the cell edge. For the base station, it has less impact - it corresponds in practice to multi-carrier configuration already supported in earlier releases [3].

In Figure 5, inter-band Carrier aggregation, carrier from different bands can be aggregated. For this UE should be capable for multiple bands. As non-contacgious carriers are used so interference is negligible for this. For Maintaining high spectra efficiency guard bands for CC should be set to that extent so that it supers inter and intra system interference.

Bands 1 and 5 for 10 MHz CCs, one CC per band is used in this class. Major issue for the UE in this class is that UE should have multiple simultaneous receive and transmission chains, intermodulation and cross-modulation within the UE device. There is requirement to design such components that help to reduce harmonics, and other intermodulation products, which meet 3GPP requirements.

There are various potential deployment scenarios for Carrier Aggregation. CA allows flexibility in selection of new bands to improve coverage and mobility for existing deployed carrier. The detailed of each scenario is explained below. 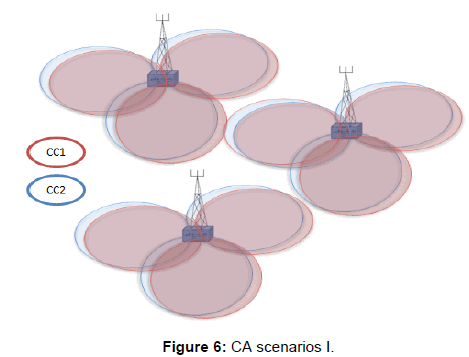 Both provide same coverage and Mobility. It is likely to be from same band. So this is basically intra band CA. This scenario is used where operator have high capacity. To accommodate high number of users in small area with better QoS, this is preferred scenario. This scenarion is supported for DL as well as in release 10.

Scenario II: The Carrier Component 1 and Carrier Component 2 are colocated and overlapped. But the CC1 cells are having smaller coverage area due to high path loss than CC2 cells coverage area. It is inter band CA. Here CC2 provides better coverage to the and CC1 helps to imporve data rates in network. Mobity is based on the Coverage area of CC2. This scenario implemented when CC1 and CC2 are from different bands, e.g., CC1 = {800 MHz, 2 GHz} and CC2 = {3.5 GHz}, etc., as shown in Figure 7. This scenarion is supported for DL as well as in release 10. 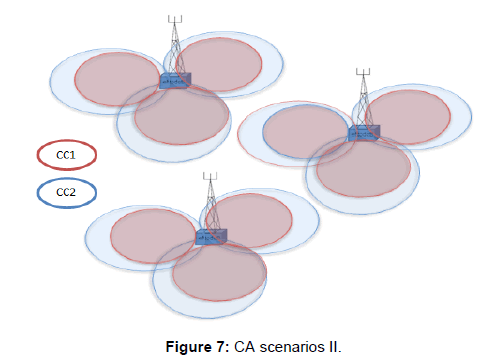 Scenario III : CC1 and CC2 are colocated but CC2 seeks antenna are providing coverage at the null points of coverage of CC1 cells or cell boundaries. So it helps to provide the better throughput at cell edge to user. This scenario implemented when CC1 and CC2 are from different bands, e.g., CC1 = {800 MHz, 2 GHz} and CC2 = {3.5 GHz}, etc., as shown in Figure 8. So benefit for this scenario is that it increase the cell edge throughput and enhance the user experince interns of delay, latency and throughput. This scenarion is supported for DL as well as in release 10. 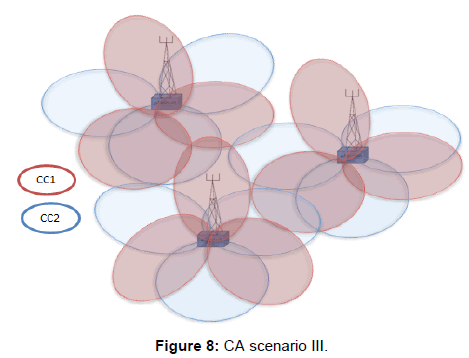 Scenario IV : In this type of scenario CC1 cells act as macro cells and provides full coverage while the CC2 cells act as Remote Radio units which are used to improve the throughput at high capcity areas as shown in Figure 9. It is also inter band CA. Mobility is always taken care of CC1. And this type of scenario is implemented in hot spots like shoping malls, railway station,stadiums etc. In this CC2 underlayed to the CC1 cells. Hetrogenious network has this type of architecture. It helps to increase the data rates and provide the coverage at covergae holes of CC1 cells.It is also used for inter band carrier aggregation. This scenarion is only supported for DL in release 10. Scenario V : In this frequency selective repeaters are used to extend the coverage for one of carrier component.It has architecture same as Scenario II. This scenarion is only supported for DL in release 10 (Figures 10 and 11). 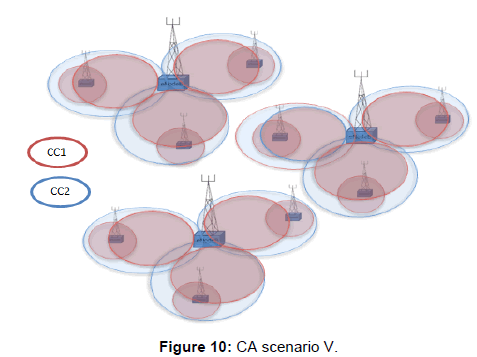 Form above scenarios, Scenario III is most adapted scenario as it provide 360 degree coveage and high celledge throughput.

This section describes how the Carrier Aggregation feature impacts the network functions and capabilities. It includes Capacity, throughput and mobility.

Providing a better and more consistent Quality of Service to users to the load-balancing across frequencies and systems. It helps in enhancing and enabling interference management with intelligent allocations of resources by scheduler during RRM [13,14].

There are no changes to mobility from the previous releases [15-18]. Mobility is based on PCell coverage (refer to 3GPP TS 36.331):

Event A4 (if Inter-Frequency Load Balancing moves UE due to load balance purposes).

Event A5 (PCell becomes worst than threshold1 and neighbor becomes better than thereshold 2).

The test results shows that when PCell CC and SCell CC is activated the throughput is high as compared to CA disabled in network. Figure 12 shows the test results 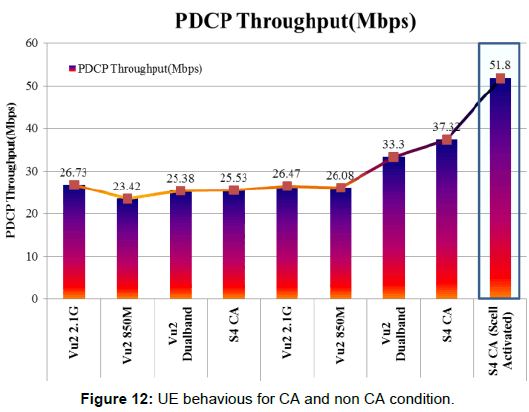 Another test is performed to check behaviour of VoLTE call and FTP download simultaneously in CA and Non CA environment. 1GB FTP Download Long Call is test along with VoLTE call from VoLTE capable UE. Figure 13 shows the test results. 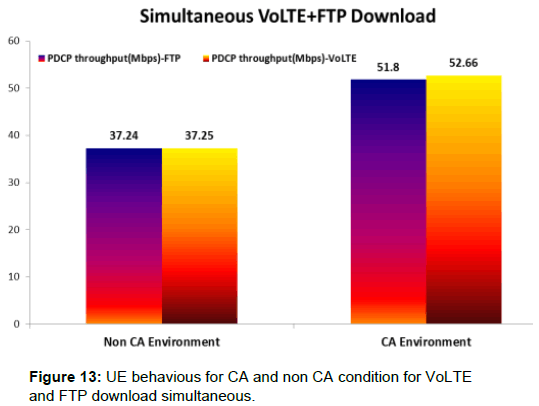 Carrier aggregation provides pooling gains across carriers, bringing the effective efficiently of multiple carriers nearly on equivalence with a single carrier having the same bandwidth as the aggregate. The key benefits of the Carrier aggregation includes the enabling of bandwidth aggregation of two FDD carriers (downlink only),More efficient use of scattered spectrum, Increased performance due to improved Frequency selectivity, Higher capacity, Increased downlink speed across the coverage area, decreases UE downlink latency and resource utilization per TTI benefits of considering two carriers at scheduling. Carrier aggregation improving mobility in network, by mitigating the relative inefficiencies that may be inherent in wireless technology. Basically Carrier Aggregation (CA) is used to increase the bandwidth by combining several carriers, and thereby increase the peak bitrates in DL. Further evolution of CA is expected in future releases of LTE to include more advanced features such as inter-band CA for the UL and separate timing control for different UL CCs, to support additional deployment scenarios.

Copyright: ©2016 Gujral E, et al. This is an open-access article distributed under the terms of the Creative Commons Attribution License, which permits unrestricted use, distribution, and reproduction in any medium, provided the original author and source are credited.