Copyright: © 2015 Weltman JK. This is an open-access article distributed under the terms of the Creative Commons Attribution License, which permits unrestricted use, distribution, and reproduction in any medium, provided the original author and source are credited.

Ebola glycoprotein GP1,2 performs functions which are essential for the binding of virus to the target cell membrane and subsequent internalization and processing by the target cell [1]. This journal has recently published an analysis of the information entropy (H) of a dataset comprised of Zaire and Sudan Ebola virus (ZEBOV and SEBOV) glycoprotein GP1,2 sequences [2]. The current epidemic of Ebola virus disease (EVD) is caused exclusively by viruses of the ZEBOV strain (http://www.who.int/mediacentre/factsheets/fs103/en/). Accordingly, this Editorial focuses on the potential significance and usefulness of the H distribution [3] in analyzing ZEBOV GP1,2 proteins.

The complete set of ZEBOV GP1,2 amino acid sequences (N=139) was downloaded in FASTA format using the NCBI Ebolavirus Resource (http://www.ncbi.nlm.nih.gov/genome/viruses/variation/ebola/) on March 26, 2015. Determination of information entropy and graphing of the results were performed with 64-bit Enthought Python 2.7.6 as previously described. In this research, data are presented as summations of H in order to enhance the visualization of the organization of H distribution over the entire length of 676 amino acids that comprise the ZEBOV GP1,2 protein. In this representation, mutating regions are represented as regions in which

> 0.0 where n is amino acid position. Non-mutating regions in the protein sequences are represented as regions in which

The H distribution obtained for the ZEBOV GP1,2 set of sequences is shown in (Figure 1). The slope 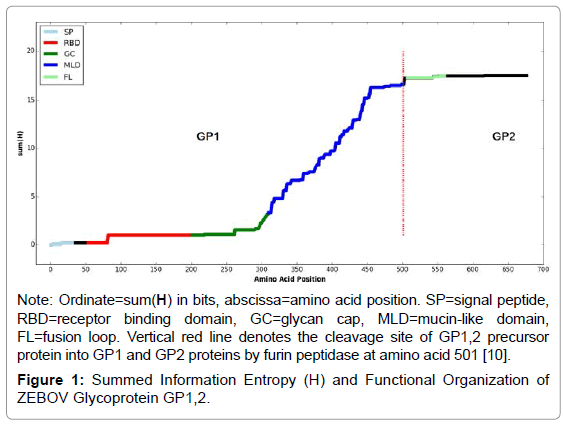 The distribution of sum(H) as a function of n for ZEBOV GP1,2 is shown in (Figure 1). The slope is close to zero until position 82, which is a mutating site. There is a zero slope, ie, with no mutation, from positions 83 to 218. A much greater

slope, indicating the accumulation of mutants, began at position 262 and persisted through position 503 of the GP1.2 sequence dataset. The

slope was again zero from position 504 until position 543, and remained close to zero until, and including the C-terminus at position 676.

The mucin-like domain (MLD) is the region of ZEBOV GP1,2 that displayed the greatest accumulation of mutants. In contrast, the receptor binding domain (RBD) and the fusion loop (FL) both occupied ZEBOV GP1,2 regions that displayed little, if any, tendency to mutate.

The tendency towards zero H displayed by both the RBD and the FL regions of GP1,2 suggests that these regions may be under biological constraints that restrict the ability of mutations to occur or for mutated sequences to persist. It is proposed that these invariant positions may be useful as immunologic or therapeutic targets with an inherent stability that mitigates against mutational escape.

As of this writing, the 2013-2015 epidemic of Ebola virus disease (EVD) in West Africa, caused by ZEBOV, has produced 25,556 cases and 10,587 deaths (http://www.cdc.gov/vhf/ebola/outbreaks/2014- west-africa/case-counts.html). It is proposed that these two invariant GP1,2 peptides detected by information entropy may be useful for development of anti-ZEBOV preventive vaccines and pharmaceutical agents.