Copyright: © 2016 Summerfield JH, et al. This is an open-access article distributed under the terms of the Creative Commons Attribution License, which permits unrestricted use, distribution, and reproduction in any medium, provided the original author and source are credited.

An efficient fuel cell could replace combustion engines and advance the goal of being less oil dependent. For a fuel cell, an accurate mathematical model is an important tool for optimizing fuel cell efficiency, which makes fuel cell model a current research topic [1,2]. The novelty of this work is that three fuel cells are modelled apart from the typical hydrogen oxygen fuel cell. Furthermore, a Matlab computer program is presented so that others may investigate their own systems. 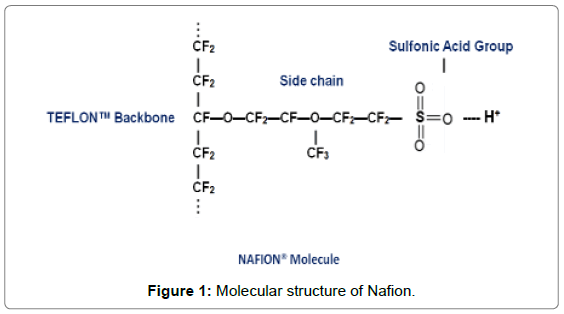 Structurally Nafion is a Teflon-like, hydrophobic, fluorocarbon backbone with sidechains that terminate in a hydrophilic sulfonic acid. When Nafion is in contact with solution, the proton from the sulfonic acid can easily exchange with cationic species in solution. Nafion provides a cation selective matrix where cationic redox species are concentrated within the film. Because Nafion is a polymer, mass transport in the system is slowed. In the acid form, Nafion provides ion conduction through the acidic proton about the sulfonic acid.

A fuel cell consists of two electrodes separated by an ion conducting membrane. As is typical, the membrane is Nafion and the electrodes are graphite. When catalyst coated electrodes are pressed against the membrane, interfacial zones are created. The electrochemical reactions occur only in these interfacial zones. A local difference in the concentration of anions and cations is produced because of these reactions. This separation of charge creates a potential difference across the cell. The slightly resistive nature of the electrodes and Nafion causes a potential loss in these regions. Table 1 shows the fuel cells investigated in this work [3].

Consider a one dimensional model. Define Cj(x, t) as the concentration in mol/cm3, Jj(x, t) as the flux (mol cm–2 s–1) and φ(x, t) as the potential (volts). The Nernst-Plank equation relates these quantities.

For simplification, the relation between flux and concentration is relied on,

where n is the number of electrons involved in the redox reaction and A is the surface area of the electrode. This work considers each chemical species independently so Eq. (4) reduces to

Turning to the relation between concentration and electric potential energy, Poisson’s equation is relied on

where ε=ε0εr and is the relative permittivity. ε0 is the vacuum permittivity and εr is the dielectric constant. This is 20 for Nafion [4]. For the systems of interest, Eq. (6) becomes

Finally then, equations (3) and (7) are used to define the species movement over the Nafion membrane [5].

Equation (3) provides the transport equation with a condition on

as seen in Eq. (7). Instead of considering derivatives of the potential, it is replaced with a relation to the electric field, E(C(x))

This transforms Eq.(1) to

where J is the time independent, steady state. Equation (7) can also be recast,

Equations (9) and (10) appear to have no simulation problems. After a bit of examination they reveal themselves to be stiff partial differential equations. Standard methods were used to regularize them [6] and a Runge-Kutta scheme was used for the simulation’s calculations [7].

then the above become

. This scaling and rearrangement yields

along with writing each equation as a function of

Equations (21) and (22) are the equations used in the Appendix A program. The diffusion coefficients shown in Table 2.

Table 2: Diffusion coefficients for the simulations. R is the ideal gas constant and T is temperature. The other parameters are found in the program.

To verify that the simulation results were accurate, an equation with a fixed point in the center of the interval over which the simulation was ran was needed. The equation used was

evaluated at x = l/2. These equations were entered into the simulation in the form

. The resulting curves were as expected, creating the correct parabola for y1 and the correct lines for y2 and y3.

For a 52 micrometer Nafion membrane, the excess proton concentration at the membrane, the electric field strength at the membrane, and the voltage at the membrane are shown for all three fuel cells in Figures 2-10. The simulation currently does not allow a thickness of 51 micrometers or less. This is likely because of the fixed point assumption and for a membrane 51 micrometers or less, one cannot assume the excess proton concentration is zero in the middle of the film or the position of the zero concentration is too uncertain. It is interesting the simulation breaks down at around the same thickness used in a fuel cell. It is not clear if this is the result of the simulation method or a characteristic of the modeling equations or the constraints on the system. Without the fixed point assumption, there is no interval within the film where the concentration of protons and Nafion is neutral. This is why the simulation breaks down and could be why such thin films are not stable in fuel cells. 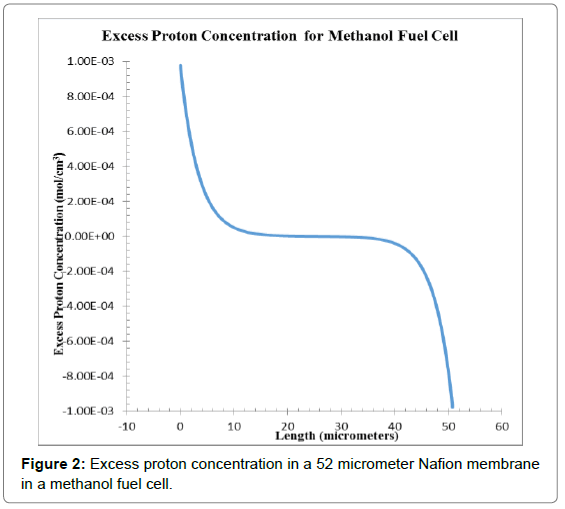 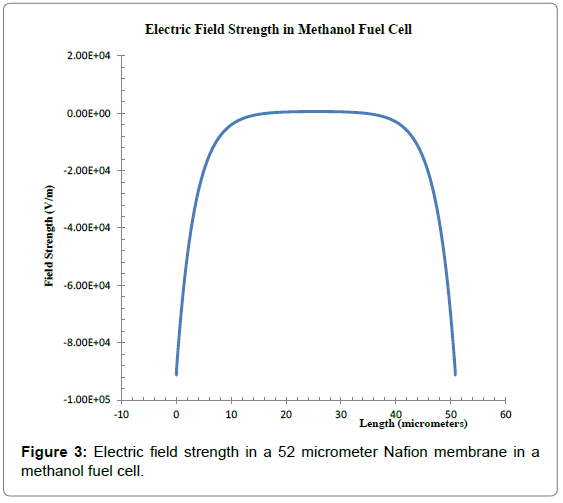 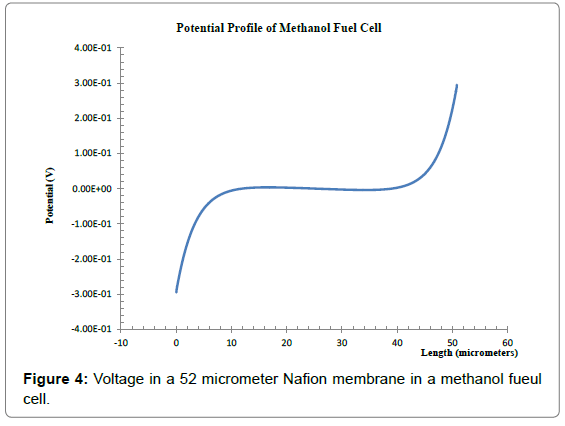 Figure 4: Voltage in a 52 micrometer Nafion membrane in a methanol fueul cell. 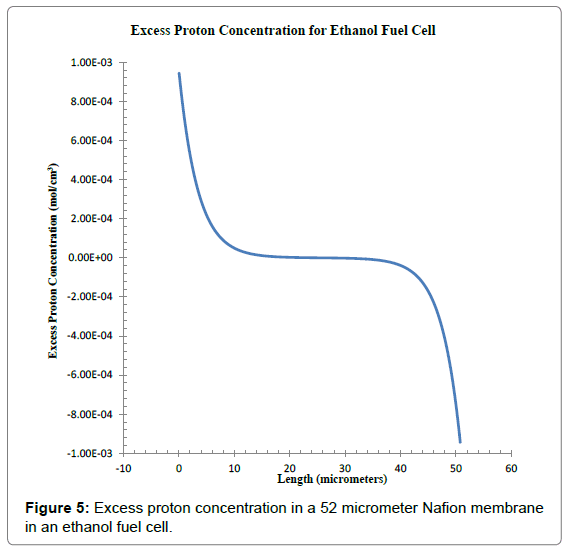 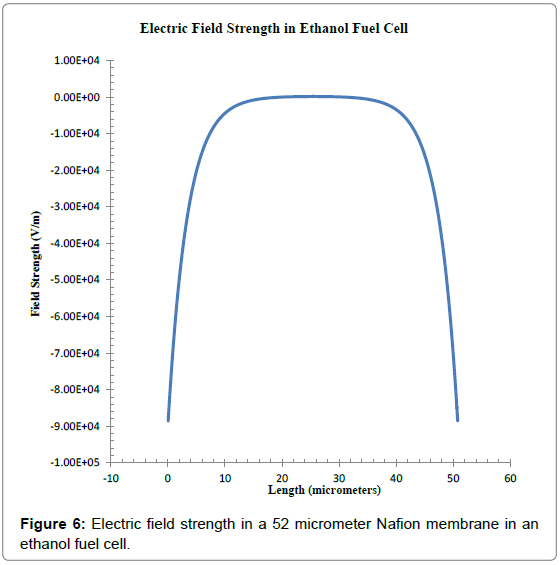 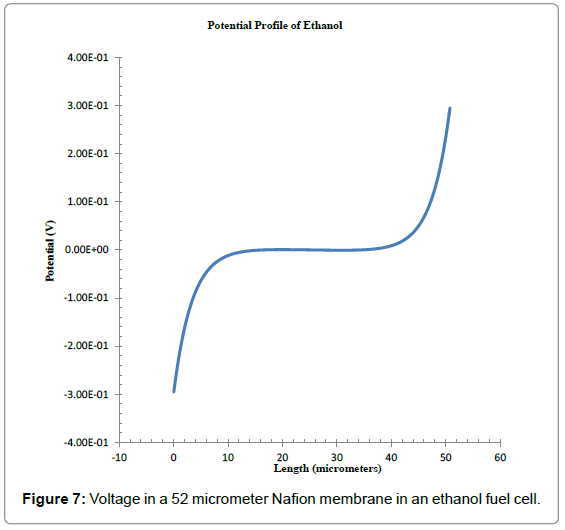 Figure 7: Voltage in a 52 micrometer Nafion membrane in an ethanol fuel cell. 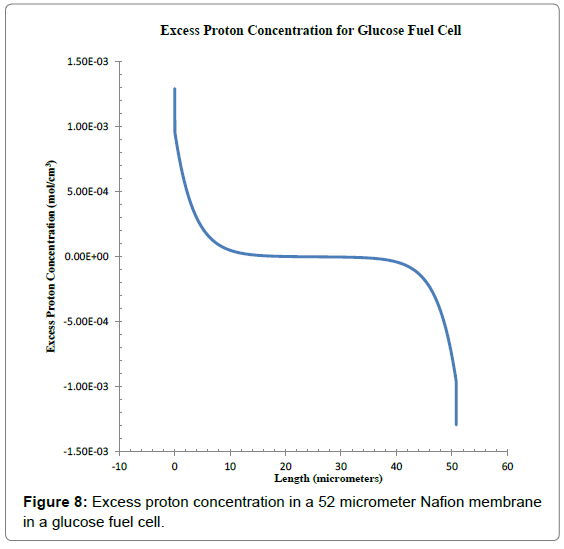 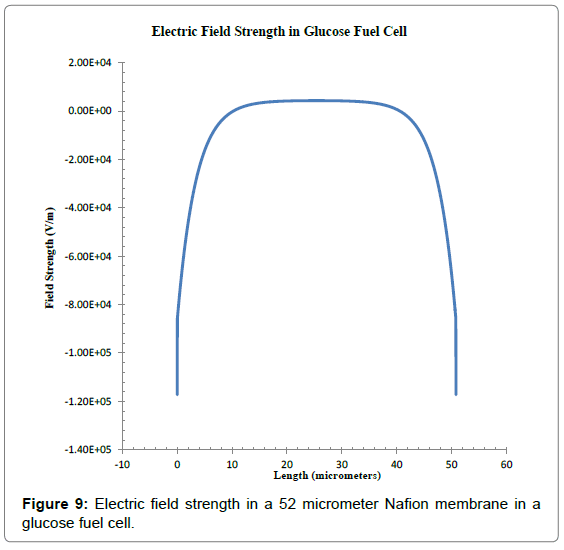 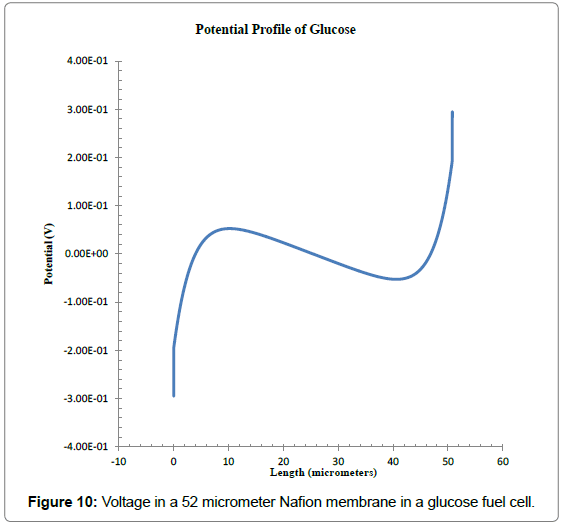 Figure 10: Voltage in a 52 micrometer Nafion membrane in a glucose fuel cell