Copyright: © 2017 Hassan MB, et al. This is an open-access article distributed under the terms of the Creative Commons Attribution License, which permits unrestricted use, distribution, and reproduction in any medium, provided the original author and source are credited.

SCD is one of the major health problems in Saudi Arabia, especially in Southern, Western and Eastern areas where the gene frequency of this disease is quite prevalent. Many studies were carried out in these areas. There is a lack of studies of the effect of consanguinity on disease outcome and prognosis. We did this study in western area in Almadinah Almunawarah. We determined the effect of consanguinity on the disease by three factors. These factors are (Blood Transfusion, First complain and complications). In this study, we carried out a retrograde analysis of patients’ files, and found that 44% of the patients were products of consanguineous marriages. But the research concluded that there was no clear increase in complications caused by the state of consanguinity of the patient’s parents, although patients on consanguineous parents have had slightly more incidences of vaso-oclusive crisis.

Sickle cell disease (SCD) and its variants are genetic disorders resulting from the presence of a mutated form of hemoglobin, hemoglobin S (HbS). The most common form of SCD found in North America is homozygous HbS disease (HbSS), an autosomal recessive disorder first described by Herrick in 1910. SCD causes significant morbidity and mortality, particularly in people of African and Mediterranean ancestry.

Sickle cell disease (SCD) is one of the most important single gene disorders of human beings. In the United States, SCD affects about 72 000 people and 2 million are carriers [2].

In Africa, more than 200 000 infants are born yearly with SCD [3]. In the United States, mortality has decreased dramatically with newborn screening and better comprehensive care. The median age of death in patients with SCD in the United States is now 53 years for men and 58 years for women. However, SCD patients are still hospitalized frequently and by the fifth decade of life, 48% of surviving patients have documented irreversible organ damage.

SCD in Saudi Arabia was first reported in the Eastern province in the 1960s [4].This led to the initiation of multiple regional and national screening studies to determine the clinical characteristics and frequency of SCD genes in different regions of Saudi Arabia. Sickle cell disease was detected in 108 of 45,682 children and adolescents with a prevalence of 24 per 10,000. The regional distribution of sickle cell disease showed eastern region dominance with a prevalence of 145 per 10,000, followed by the southern region with a prevalence of 24 per 10,000, western region 12 per 10,000, and central region with 6 per 10,000. No cases were found in the northern regions. The male to female ratio was approximately 1:1 of a total of 488,315 individuals screened, 4.20% had sickle cell trait, 0.26% had sickle cell disease, 3.22% had thalassemia trait, and 0.07% had thalassemia disease [5]. Both the diseases were focused mainly in the eastern, western and south-western parts of the country. Among the 207,333 couples who were issued certificates for matching, 2.14% were declared high risk. Among the 2,375 high-risk couples contacted by telephone, 89.6% married each other, despite the known high-risk status [6].

Comprehensive national survey of the distribution of the sickle-cell (Hb S) gene and thalassemia genes was initiated in 1982, with more than 30,055 blood samples collected. The Hb S, alpha- and betathalassemia gene frequency range was 0.005-0.145, 0.01-0.40 and 0.01- 0.15, respectively in various areas of Saudi Arabia. We present here an appraisal of sickle-cell and thalassemia gene occurrence in the Saudi population, based on our studies conducted over 10 years in different regions of Saudi Arabia [7]. During the two year study period (2004- 2005), 11 554 of 11 874 (97%) mothers answered the question on consanguinity, and 6470 of 11 554 (56%) were consanguineous. there was no significant association with either sickle cell disease (P=0.97) or glucose-6-phosphate dehydrogenase deficiency (P=0.67) for firstcousin consanguinity [8].

The study was conducted in Maternity and Children Hospital, Madinah, Saudi Arabia.

Data was obtained from the medical records by data collection sheets. The data collection sheet was built partially on previous studies on clinical presentations of sickle cell disease. The data collection sheet included the following variables: socio-demographic variables (Age, sex, residency, nationality…), first clinical presentation of the disease (Main complain, clinical sign and investigations), age at diagnosis, duration of illness, type of Sickle Cell anemia, electrophoresis, number and causes of following admissions(acute infections, fever, Splenic Sequestration, painful crisis, stroke, priapism…), blood transfusions, surgical procedures, use of hydroxyurea medication, presence of Dactylitis, vaccination, family pedigree, age and cause of death (if deceased) and other complications that are attributed to the disease. Coding of the data was be carried out by the investigators. A total of 120 samples were collected, varying in age from 6 months to 18 years. There was no documentation of mortality due to the lack of a system that shares medical records across all hospitals.

Data was analyzed through the Statistical Package for the Social Sciences (SPSS). Descriptive analysis has been used for categorical variables and chi-square test was applied to identify the main factors under study by using the statistical significance. Backward logistic regression was also used to find the association between related factors.

The effect of consanguinity on disease outcome and prognosis by (Blood Transfusion, First complain and complications are mentioned in Tables 7-9, whereas, Table 10 shows that all chi tests are not significant and that there is no correlation of the mentioned variables to consanguinity. 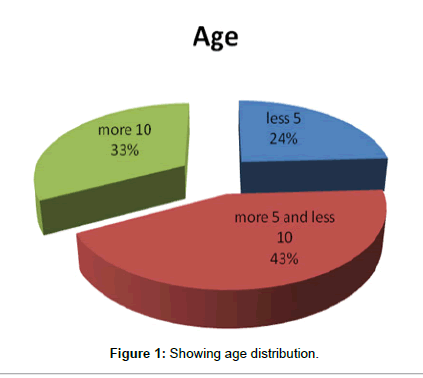 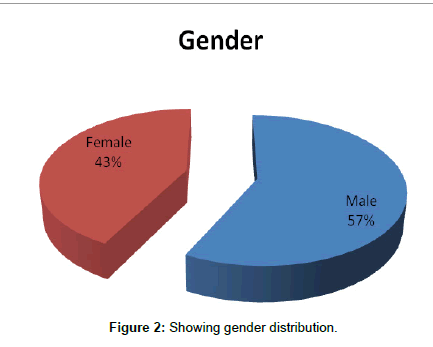 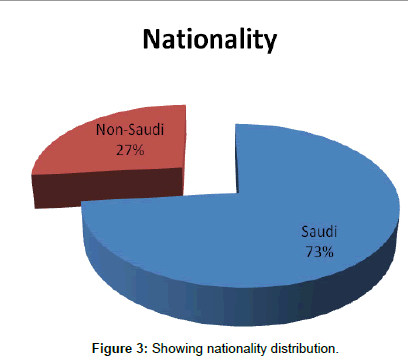 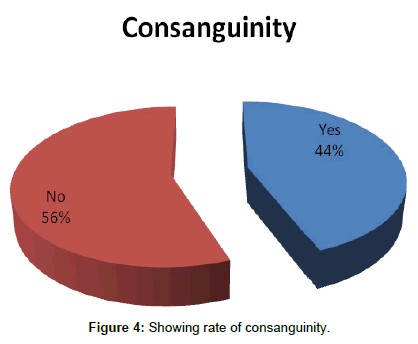 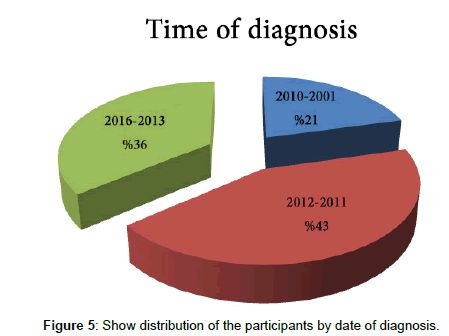 Figure 5: Show distribution of the participants by date of diagnosis.

SCD is one of the major health problems in Saudi Arabia, especially in Southern, Western and Eastern areas where the gene frequency of this disease is quite prevalent. Many studies were carried out in these areas. There is lack of study in effect of consanguinity on disease outcome and prognosis. We inducted this study in western area in Almadinah Almunawarah. We determined the effect of consanguinity on disease by three factors according to pediatric hematological physician. These factor are (Blood Transfusion, First complain, and complications).There was lack of mortality data, due to this we didn't put in in the study.

Table 5: Shows the time of diagnosis

Table 6: We can say that there is no sign of consanguinity in sickle cell anemia incidence.

Table 7: Distribution and rate of complications.

We have found in our study that the non-consanguineous patients suffer from more complications (this may due to decreased awareness in less educated families and noncompliance to medication). However, the consanguineous group are more likely to develop more serious complication (vaso-oculusive criss) and they are more likely to undergo surgical procedures (splenectomy and cholecystectomy).

We would like to conduct further research in the future with a larger sample size to improve the significance and have a clearer results and correlations.