Tea is one of the most common beverages in all over the world. Next to water, it is the most consumed beverage. During the last decades, there has been an extensive increase in the level of heavy metals in tea and other foods. The contamination of tea by heavy metals may pose a serious threat to human due to their toxicity, wide sources, non-biodegradable properties and accumulative behaviors. The aim of this study was to investigate the copper, iron and lead content of several commercially available brands of tea (Camellia sinensis) in Egypt. Ten of the most widely consumed brands of black tea were purchased from local markets. Copper, Iron and Lead contents in the tea were determined by atomic absorption spectrophotometer after acid digestion. Among the investigated metals Fe was the highest (193.82 μg/g). Copper was the second highest (16.18 μg/g) metal found in black tea samples, whereas Pb showed minimum levels (1.41 μg/g). The data obtained in the present work compared well with the counterpart data reported internationally. Based upon the present safety standards, the tea versions selected in the present study were found to be safe for human consumption. On the other hand, routine check and frequent analysis of foodstuff is also required with intention to avoid the risk of exceeding the intake beyond the tolerance limits standards.

Tea is one of the most common drinks in all over the world, which is produced from the leaves of a shrub Camellia sinensis [1]. Considering that an estimated amount of 18-20 billion tea cups are consumed daily worldwide [2]. Many studies have proved that tea has some beneficial effects on human health such as prevention from Parkinson’s disease, cardiovascular disease, cancer, immune disorders and decrease of blood cholesterol levels [3].

Heavy metals have bio-importance as trace elements but the biotoxic effects of many of them in human biochemistry are of great concern. They enter our bodies via food, drinking water and air [4]. The accumulation of heavy metals can have middle term and long term health risks, and strict periodic surveillance of these contaminants is therefore advisable [5]. Depending on the origin of tea leaves, heavy metals accumulation can be derived naturally by soil contamination, use of pesticides and fertilizers [6]. Plants can take up the heavy metals from the soil and under certain conditions high levels can be accumulated in the leaves and other edible parts of the plant. For instance tea plants can uptake Pb from the soils, and inevitably, a proportion will be transported to the tea leaves which are used to prepare one of the most popular beverages in the world. Each country sets its own allowable limit for Pb concentration in tea leaves. In Europe it is 5 mg/kg, in Japan it is 20 mg/kg, while in China the limit is 2 mg/ kg. Recent increases in the Pb concentration of commercial tea supplies have caused concern to both consumers and producers. For instance, one brand of tea showed annual increases in its Pb concentration from 0.63 mg/kg in 1996 to 2.11 mg/kg in 1999. Furthermore, the soluble Pb concentration in beverages prepared from some teas high in Pb concentration can exceed the 0.05 mg/l limit set for drinking water in China [7].

However, there is often little information available about the safety of tea leaves and finished tea products with respect to heavy metal contamination. Due to the significant amount of tea consumed, it is important to know the toxic metal contents. Therefore, determination of these elemental compositions in tea and related products is very essential [8]. The objective of this study was to determine Cu, Fe and Pb contents of several commercially available brands of tea (Camellia sinensis) in Egypt. Finally, the results are compared with the outcomes of other related publications in this respect.

Ten marked brands of black tea which commonly consumed in Egypt were collected from local markets. The glassware containers used for analysis were washed with detergent and rinsed several times with tap water to remove absorbance due to detergent; then they were soaked overnight in 6 N HNO3 (Merck) solutions and finally rinsed with deionized water.

Each tea sample of 0.50 g was accurately weighed into a clean 100 mL beaker. Concentrated nitric acid (10.0 mL) was added, the beaker was covered with a watch glass and material was boiled gently on a hot plate provided with a tunable thermostat until digestion was complete. The complete digestion took about 1 h. A 1.0 mL portion of 70% perchloric acid was then added and gentle heating was continued for another 1 h. Small aliquots of milli-Q purified water were added to prevent dryness due to evaporation. After the digest was cooled, it was filtered and transferred to a 100 mL volumetric flask that has been rinsed with ultrapure water. Three replicate digestions were made for each sample. The average of blank signals was subtracted from analytical signals of digested samples. All necessary precautions were adopted to avoid any possible contamination of the sample as per AOAC guidelines [9]. To express the results on a dry weight basis the moisture of the samples was removed by keeping them at 60ºC for 6 h. The accuracy of the digestion procedure was evaluated by spiking with aliquots of metal standards and then analyzing them as usual. Acceptable recoveries >96%, were obtained for the analyzed metals.

AAs measurements were performed with a SHIMADZU AA6650 atomic absorption spectrophotometer equipped with a deuterium background corrector. An atomizer with an air/acetylene burner was used for determining all the investigated elements. All instrumental settings were those recommended in the manufacturer’s manual book. Suitable internal chemical standards (Merck Chemicals, Germany) were used to calibrate the instrument.

Copper (Cu), Iron (Fe) and lead (Pb) levels were determined in different samples of black tea. The mean (± standard deviation) and range of the concentration of metals are presented in Table 1.

Copper is one of the native metals found in tea, central to polyphenol oxidase enzyme. It is one of the major elements next to Al and Zn in tea [10]. The copper contents in investigated tea samples ranged from 9.61 to 30.00 μg/g with the mean of 16.18 μg/g (Table 1). The variation of Cu content in the tea could be attributed to different types, grade and producing areas of the teas. Cu pollution could be mainly from the rolling machine and fungicides [11]. The obtained results showed higher values than those values (13.2 ± 0.96) reported by Naithani and Kakkar [12] and lower than the Cu contents (27.7 ± 0.7), (24.8 ± 1.4), (18.1 ± 6.9) μg/g reported by Matsuura et al. [13], Narin et al. [14] and Ashraf and Mian [15], respectively. The comparison of Cu with The permissible limits of the heavy metals in tea samples as per PFA (Prevention of Food Adulteration Act, 1954, India) and SLTB (Sri-Lanka’s standard for black tea) showed that the levels of Cu were below the PFA and SLTB limit of 150 and 100 μg/g, respectively (Table 2). Furthermore, all the samples analyzed conformed to the maximum permissible concentrations (MPC) for Cu (30 ppm, μg/g) in black tea as given in (KS 65: 2009) by Kenya. Furthermore, none of the examined black tea samples exceeded 60 μg/g, the allowable limits given by the Chinese Ministry of Health. Therefore, even for people who consume a large amount of tea (e.g. 10 g of tea leaves per day), the daily intake of Cu from tea drinking is less than 0.4mg, while the recommended daily consumption of Cu for adults, issued by the US Air force is 1.5 to 3 mg. Therefore, the Cu concentrations in tea samples are acceptable from the perspective of the consumer health (Figure 1).

Table 2: International comparison of the data. 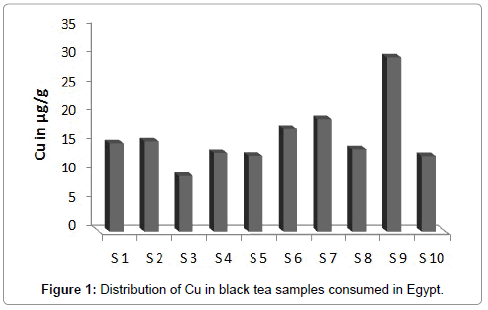 Iron is the most needed micronutrient in plants [16]. The bioavailability of this element is influenced by polyphenol found in tea that can markedly inhibit the absorption of iron [17]. As shown in Table 1, iron was found to be the predominant micronutrient metal in the tea samples analyzed in the present work, ranging between 97.9 and 488.49 μg/g with the mean of 193.82 μg/g, which were lower than those, described in the literature [12,13,15,18] and were higher than those reported by Han and Li [19]. Srilanka’s standard for black tea gives their upper limit to be 500 μg/g for Fe, a comparison to which reveals that all the tea samples analyzed are in conformity (Table 2) (Figure 2). 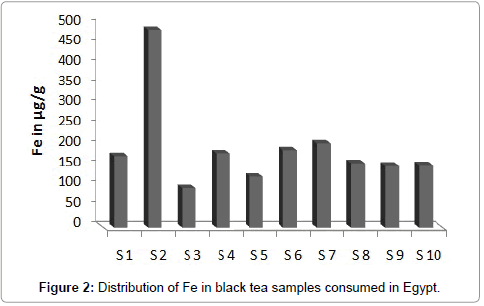 The main sources of Pb in tea samples could be their growth media, such as soil. Tea plant is normally grown in high acidic soils where Pb is more bioavailable for root uptake. Deposits from the polluted air into the leaves of the plant can be another source of Pb contamination of tea [11]. On the other hand, Jin et al. 2005, argue that the tea plant can uptake Pb from the soil, a portion of which is transported to and accumulated in its leaves. The concentration of lead (Pb) in black tea samples was presented in Table 1 with a mean of 1.41 μg/g, range of 0.29 to 3.2 μg/g. Findings of the current study were lower than those reported by Narin et al. [14], Ashraf and Mian [15] and Han and Li [19], and were higher than those reported by Matsuura et al. [13]. In our study, Pb content in all the black tea samples was less than the limit prescribed under the PFA Act 1954, India and the WHO (1998) limit of 10 μg/g [20].

Due to the lack of information specifying the acceptable contents of heavy metals in teas, the maximum allowable and safe concentration of each metal is urgently needed. Occasional check and frequent analyze foodstuff is also with intention to avoid many risk that arise from intake beyond the tolerance limits standards [21-26] (Figure 3). 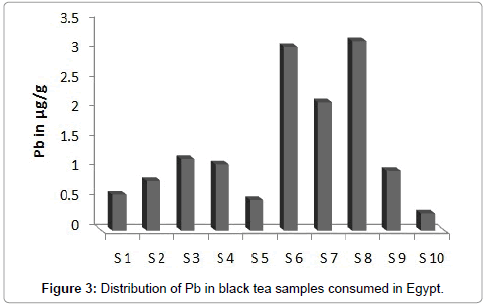 Under regular consumption habits, it is important to assess the daily intake of metals from tea and compare it with the total acceptable daily intake (ADI) values set by international organizations for health safety. This can be obtained by multiplying the average quantity of tea consumed per individual per day by the concentration of each element in studied tea samples.

B is the concentration of metal in studied tea samples

Calculations were made assuming body weight of 70 kg for adults and an 8.21 g average daily consumption. The possible daily uptake and recommended daily allowances are also shown in Table 3. The average daily intake of metals through tea consumption can be ordered as following: Fe>Cu>Pb. As can be seen in Table 3, the EDI values calculated for tea examined in present study were far below the recommended values. Therefore, the concentrations of all elements for daily intake are below safety levels for human consumptions.

Table 3: Overall means of heavy metals contents in tea samples and comparison of the average daily dietary intakes of each element.

Tea is an important beverage for people from Middle Eastern countries. The study shows that the levels of the copper, Iron and lead studied are generally within safe limits and compare well with levels in similar teas from other parts of the world. Routine check and frequent analysis of foodstuff is required to avoid the risk of exceeding the intake beyond the tolerance limits standards.

Copyright: ©2016 Soliman NF. This is an open-access article distributed under the terms of the Creative Commons Attribution License, which permits unrestricted use, distribution, and reproduction in any medium, provided the original author and source are credited.