4School of Medicine, The University of Queensland, Brisbane Australia

Copyright: © 2015 Yap TS, et al. This is an open-access article distributed under the terms of the Creative Commons Attribution License, which permits unrestricted use, distribution, and reproduction in any medium, provided the original author and source are credited.

Chromosome 7 duplication of various sizes and position has been described in the literature [1]. While most are associated with phenotypical features and developmental delay, a few case reports have suggested associated anomalies such as cardiac abnormalities, skeletal abnormalities and gastrointestinal and genital defects [2].

Previously cases of 7p22.1 microduplication with a size of 1 Mb and 1.7 Mb have been reported showing similar phenotypical features including prominent forehead, anteverted nares, ocular hypertelorism and language delay [3,4]. Herein, we describe a third child with similar features duplication within chromosome 7p22.1 found to have Systemic Lupus Erythematosus (SLE) and associated autoimmunearthritis. SLE is a severe inflammatory disease process, which is characterised by the dysfunction of dendritic cells, T cells, B cells, and the production of antinuclear antibodies [5].

We propose copy number variations (CNV) within the loci of chromosome 7 which contain the actin beta gene (ACTB) (OMIM#102630) may lead to dysregulation of actin cytoskeleton function which is required for T cell and B cell function. This in turn may produce an increased susceptibility to autoimmune disease such as SLE.

This 8 year-old girl was born into a non-consanguineous family with 4 other healthy children. Antenatal scan at 20 weeks gestation demonstrated short humeral and femoral lengths. She was born at term via vaginal delivery with a weight of 4.038 kg.

She presented to a regional paediatric clinic at 18 months of age with concerns of speech and gross motor delay. At this stage investigations performed included karyotype, metabolic screen and thyroid function test all of which were normal. She was subsequently lost to follow-up, but represented at 7 years of age with learning difficulties, joint deformities and reduced mobility. She was noted to be <3rd centile for her height and on the 3rd centile for her weight at 107.6 cm and 17.4 kg respectively. She had short stature with macrocephaly but no obvious mesomelia. She had a broad nasal bridge, coarse features, ocular hypertelorism, lowset and posterior rotated ears (Figure 1). 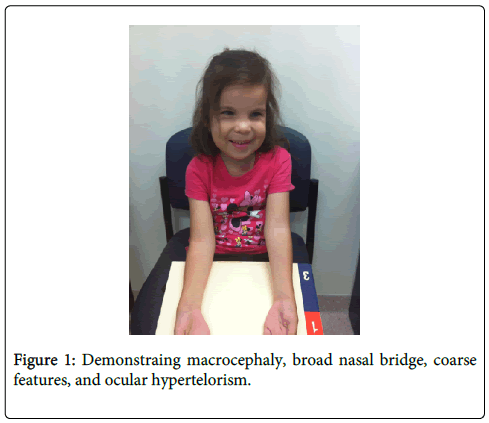 She had deformity, fixed flexion contractions (with Boutonnière shape deformity) in her proximal interphalangeal joints (PIP) in her hands (Figure 2). Range of movement of both wrists reduced in all directions. Her knees were markedly enlarged with soft tissue swelling but normal range of movement. She demonstrated limited flexion and extension of her neck. Her skin and nail examination was normal. She has a soft systolic murmur which did not have a structural basis on echocardiography, and her respiratory and gastrointestinal examination was normal.

Her skeletal survey revealed flexion deformity in the PIP with soft tissue swelling and distal osteopenia, and a J-shaped sella turcica. Tanner staging was stage one and she had normal genitalia. Ophthalmology examination revealed no evidence of uveitis with a normal vision.

A comparative genomic hybridization (CGH) array demonstrated a 1.4-1.9 Mb interstitial microduplication at the 7p22.1. The duplication region contains at least 20 known genes of which 2 have been described as disease associated ACTB (OMIM 102630) and postmeiotic segregation increased 2 (PMS2) (OMIM 600259) [3,4].

She was treated with high dose intravenous methyl prednisolone (30 mg/kg/dose) as induction of treatment and commenced on maintenance therapy with methotrexate (15 mg/sqm once weekly) and hydroxycloroquine (3 mg/kg/day) and her joint symptoms dramatically improved.

With advancement in technology such as CGH arrays, there has been an explosion in the literature investigating the significance of deletions, duplications within each chromosome, leading to new microdeletion or microduplication syndromes [2,6-10].

Chromosome 7p22.1 abnormalities have been linked with developmental delay such as autism and skeletal abnormalities [11,12]. 2 children with similar phenotypical characteristics have been described and have chromosome 7p22.1 microduplication at size of less than 2MB [3,4]. Our child showed these similar phenotypical and cytogenetic features (Table 1). The facial gestural of these three patients suggest that 7p22 duplication is a clinically recognizable dysmorphic syndrome.

Our case is the first reported patient with 7p22 duplication to demonstrate autoimmune arthritis and SLE, which expands the clinical phenotype associated with this rare copy number variation. There are well-documented links between autoimmunity and specific chromosomal microdeletion phenotypes, e.g. 22q11 deletion, 5q deletion and 18p deletion [13-15]. Some of these studies suggest that an immune dysregulation via a T cell mediated process may occur secondary to their specific microdeletion [15].

The most likely explanation for our patient developing an autoimmune disease is a direct result of her copy number variation (CNV) at 7p22.1. CNV cause alterations in gene expression due to downstream attenuation of the gene function when the presence of variable copies of the entire gene is replicated [6,16]. In inbred lupus-prone mouse strains that are Fas deficient, susceptible loci within centromeric region of chromosome 7 have been identified to cause SLE [17]. A wide range of genetic and epigenetic factors have identified across numerous chromosomal loci that can contribute towards the development of SLE [5]. Examples include genes associated with macrophage activation, cytokine signalling, and the actin cytoskeleton (Pearl 2010) [5,18-21].

Cronins are genes which control the disassembly of actin cytoskeleton which in turn modulates T cell activation playing a role in the pathogenesis of SLE [22,23]. Deregulation of T and B cell function has been shown to be linked to SLE [24,25]. α-Actin has emerged as a major auto-antigen target for anit-dsDNA in the pathogenesis of SLE [26]. The ACTB gene (OMIM#102630), whose gene product is β-actin, maps to 7p22.1 and is within the duplicated region of our patient. Further support for the role of aberrant actin cytoskeleton function creating auto immune disease is the Wiskott-Aldrich Syndrome (OMIM 301000), which is caused by pathogenic mutations in the actin regulator (WASp protein) [27].

In summary, we describe the third known case of 7p22.1 microduplication and postulate that the facial features are suggestive of a recognizable dysmorphic syndrome and one associated with autoimmune disease. We postulate that CNV associated with the ACTB gene maybe contributory to the development of SLE and that all patients with 7p22.1 microdeletion should undergo joint surveillance in the clinical setting.