Copyright: © 2014 Bozkurt B, et al. This is an open-access article distributed under the terms of the Creative Commons Attribution License, which permits unrestricted use, distribution, and reproduction in any medium, provided the original author and source are credited.

Completely duplicated ureters are not commonly used in renal transplantation due to increased risk of postoperative complications, such as urinary tract infections, stricture, reflux and urinary leakage. Although recent results have indicated that the occurrence of these complications is similar to that of a single ureter, few reports exist of renal transplantations of kidneys with ureteral duplication. Here, we report successful renal transplantation of a cadaveric kidney with completely duplicated ureters to a 52-year-old final stage renal disease patient who had been on dialysis for 19 years. A modified extravesical ureteroneocystostomy technique was employed, in which distal ureteric ends were spatulated and their medial edges were approximated. Double-j stent catheters were inserted during the ureteroneocystostomy and removed after 21 days when progressive serum creatine levels had decreased. During 6 months following the operation so far, no urinary tract infections, hydronephrosis, pyelonephritis, stricture, or reflux was reported. We conclude that modified extravesical ureteroneocystostomy, a newly described technique is suitable for the transplantation of a cadaveric kidney with complete ureteral duplication.

Ureteral duplication, where two ureters drain a single kidney, is the most common renal abnormality. The condition is not problematic as long as both ureters enter orthotopically or if the duplication is incomplete [1,2]. A kidney with duplicated ureters is more susceptible to post-operative urinary tract infections, stricture, reflux and urinary leakage; therefore, it is not a preferred option in kidney transplantations, in which postsurgical complications are the predominant cause of morbidity [3-5]. However, recent studies have revealed that the development of complications after transplantation of a donor kidney does not differ between completely duplicated ureters and a single ureter [5-7]. Given the increase in the number of hemodialysis patients over recent decades, and the shortage of renal allografts, development of a range of surgical techniques without post-operative complications is critical for the successful transplantation of a donor kidney with completely duplicated ureters [2,7,8]. Here, we present a technique of modified extravesical ureteroneocystostomy in which a cadaveric kidney with complete ureteral duplication was successfully transplanted to a final-stage renal disease recipient.

The wait-listed recipient, a 52-year-old female, who had been on dialysis for 19 years due to final-stage renal disease from hypertensive nephropathy was called to the transplantation center for prospective cadaveric kidney donation. In the pre-operative evaluation, the human leukocyte antigen (HLA) mismatch number was found to be 2 and the lymphocyte cross match (LCM) was negative. Since there were no contraindications, the recipient underwent renal transplantation on October 11, 2013. In pre-operative back-table screening of the left kidney of the cadaveric donor, a single bilateral renal artery and a single vein, but double ureters with complete duplication were observed. Distal ureteric ends of the kidney with ureteral duplication were spatulated, and then their medial edges were approximated (Figure 1). 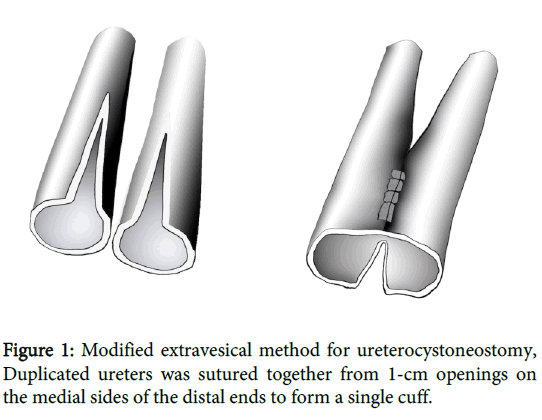 Figure 1: Modified extravesical method for ureterocystoneostomy, Duplicated ureters was sutured together from 1-cm openings on the medial sides of the distal ends to form a single cuff. Figure 2: Double-j catheter in both lumens of the single-cuffed ureters. Immunosuppression therapy included tacrolimus, mycophenolate mofetil (MMF) and steroids. There were no post-operative complications, but the recipient underwent dialysis twice for delayed graft function. The double-j stents were removed 21 days after the transplantation when progressive serum creatine levels had decreased (Figure 4). The recipient was discharged 30 days after the transplantation with a serum creatine level of 1.1 mg/dL (normal range, 0.7–1.2 mg/dL). The patient is currently under follow up for 6 months since transplantation. There were no urinary tract infections, hydronephrosis, pyelonephritis, stricture, or reflux so far during 6 months following transplantation.

In conclusion, modified extravesical ureteroneocystostomy, which is a newly described technique, is appropriate for renal transplantations from cadaveric donor kidneys with complete ureteral duplication.