Introduction: Community associated methicillin resistant Staphylococcus aureus (CA-MRSA) is a growing concern. It causes skin and soft tissue infections (SSTI’s). According to CDC CA-MRSA is currently defined as an infection with MRSA in a person with no prior history of a health care exposure such as hospitalization,surgery ,permanentlv lines or other indwelling devices or hemodialysis. The mec-A gene is responsible for the resistance to methicillin as it alters. Penicillinbinding protein PBP2a to PBP2a’. Panton Valentine Leucocidin toxin infections causes skin and soft tissue infections in CA-MRSA. This toxin carries the gene Luk-PV which is responsible for the pathogenesis of skin lesions. In this study,prevalence of CA-MRSA in the out patient clinics of dermatology, Aligarh is being focused. Aim: To detect the presence of mec A and Luk-PV gene in CA-MRSA. Material and methods: The study was done in patients visiting the out patient department of dermatology with complaints of purulent skin infections. Pus was collected from the lesions after cleaning the surrounding area thoroughly. The sample was immediately transported to the Department of Microbiology for further processing. Out of 250 patients included in the study, 180 samples were positive for Staphylococcus infection. Out of these 180 isolates of Staphylococcus aureus, 80 were methicillin resistant. DNA was extracted from these 80 samples by hotcold method. Multiplex PCR was used to detect both mec A and Luk PV gene , primers used were 310 bp for mec A,433 bp for Luk PV gene. Results: Out of 80 samples, mec A was positive in all 80 samples and Luk PV gene was positive in 46(57.5%) patients and in 34(42.5%) patients Luk-PV was not present. Conclusion: In 30 patients MSSA was isolated which were negative for mec A gene and in 7(23.3%) of these isolates Luk-PV gene was detected. Multiplex PCR assay is simple ,rapid and accurate method and offers the potential for prompt detection of CA-MRSA.

Methicillin-resistant Staphylococcus aureus (MRSA) is a specific strain of Staphylococcus aureus that has developed antibiotic resistance to all β-lactams. MRSA was first discovered in UK in 1961 and is now widespread, particularly in the hospital setting where it is commonly termed a superbug [1-8]. In addition to MRSA traditionally being seen as a hospital-associated infection, in recent years community-acquired strains of MRSA (CA-MRSA) are being reported outside healthcare facilities throughout the world. These strains are often seen in healthy carriers - mostly among children, and often associated with skin and soft-tissue infections such as boils, styes and furunculosis [9,10]. Some strains of CA-MRSA are particularly virulent and can cause life-threatening diseases such as pneumonia, mastitis, meningitis, osteomyelitis and endocarditis [11-18]. MRSA isolates were further classified in to HA-MRSA and CA-MRSA according to CDC definition, which define the CA-MRSA as MRSA infection in an individual who has : MRSA identified within 48 hours of admission to a hospital with no history of hospitalization, surgery, dialysis, or residence in a longterm care facility within 1 year of the MRSA culture date and has no permanent indwelling catheter or percutaneous medical device (e.g., tracheostomy tube, gastrostomy tube, or Foley catheter) with no known prior positive culture for MRSA and HA-MRSA infections are those isolates which not fulfilling the previous criteria [6].

MSSA refers to methicillin sensitive Staphylococcus aureus, sensitive to cefoxitin with a zone size of more than 25 mm or more according to CDC. MSSA is a strain of staph bacteria that responds well to medicines used to treat staph infections.

Resistance to methicillin is mediated by the gene mecA which codes for a unique penicillin binding protein PBP2A with reduced affinity for β-lactam rings (the primary active-site of the β-lactam antibiotics) and is transmitted by a mobile genetic element termed staphylococcal cassette chromosome mec (SCCmec) [4].

In this study,prevalence of CA-MRSA in the out patient clinics of dermatology, Aligarh is being focused and to detect the presence of mec A and Luk-PV gene in CA-MRSA.

The study was carried out in the department of Microbiology and Dermatology J.N.Medical College Hospital, AMU, Aligarh (UP).

Samples were collected from patients reporting to the various outdoor patient departments with complaints of pus filled (purulent) skin lesions. Pus was collected from the lesions after cleaning the surrounding area thoroughly. The sample was immediately transported to the Department of Microbiology for further processing. Pus swabs from the lesion were collected to identify the causative agents. Out of 250 patients included in the study, 180 samples were positive for Staphylococcus infection. MSSA refers to methicillin sensitive Staphylococcus aureus, sensitive to cefoxitin with a zone size of more than 25 mm or more according to CDC. MSSA is a strain of staph bacteria that responds well to medicines used to treat staph infections.

DNA was extracted from samples by hot-cold method. The bacterial isolates were re-suspended in 400μl Tris-EDTA buffer (pH 8.0) and heated in heat block at 95°C for 10 minutes, using the Heat Block (genetix, India) and rapidly snap cooled at 0° on ice, then centrifuged at 12000 rpm for 7 minutes and 300 μl supernatant from each of the tube was transferred into fresh eppendorftubes. Stored at -20°C prior to use. Multiplex PCR was used to detect both mec A and Luk PV gene , primers used were 310 bp for mec A,433 bp for Luk PV gene.

Primers (synthesized by Eurofins, India): The primers are shown in Table 1 [12]. The reaction mixtures consisted of 5 μl of the extracted DNA template of the bacterial isolates, 12.5 μl of master mix, 1 μl each of forward and reverse primers of mec A and Luk-PVand 3.5 μl of dH20.

Cycling parameters were set to Table 2. The PCR products were tested for positive amplification by agarose gel electrophoresis. 50x TAE stock solution was diluted to 1x TAE buffer, which was used as running buffer in gel electrophoresis unit and for the preparation of agarose gel. Agarose solution 1% was prepared.

The solution was cooled down to 60°C and 3 μLethidiumbromide (5 μg/mL) was added and mixed taking care that no air bubble was created.

Preparation of the gel: Warm agarose solution was poured in the casting mould after positioning the comb 0.5-1.0 mm above the plate so that complete wells are formed when the agarose is added to the mould. The gel poured was 1 cm thick, 12 cm in length and 11.5 cm in breadth. Any air bubbles present in the molten gel were removed by poking them with pipette. The gel was allowed to set completely (30-45 min at room temperature), then carefully the comb was removed. The gel was then mounted in the electrophoresis tank. Enough electrophoresis buffer was added to cover the gel to a depth of about 1 mm so that all wells are submerged.

Loading of the gel: DNA samples, Amplified DNA samples were prepared for gel loading as following in Table 3.

DNA marker: 100 base pair DNA ladder (Thermo scientific, Lithuania) was used as molecular weight marker. The sample mixtures and the DNA weight ladder were slowly loaded into the wells of a submerged gel using micropipette set at 12.5 μL. The lid of the gel tank was closed and the electrical lead was attached so that the DNA will migrate towards the positive anodes (red). Voltage of 100 V/cm (measured as the distance between positive and negative electrodes) was applied for 1 and half hour. Bubbles were generated at the anode and cathode (due to electrolysis) and the dye migrated from the wells into the body of the gel. When all the samples were migrated out of the wells then a constant voltage of 100 V was applied.

The gel was run until DNA samples along with the bromophenol blue and xylene cyanolmigrated an appropriate distance through the gel. The electric current was then turned off and the leads and the lid from the gel tank were removed.

Scanning of the gel: The wet gel was examined under Gel Doc system, the gel image was captured and digitalized at a high resolution i.e., 600 dots per inch (dpi) using transparent mode of the scanner.

Detection of the mec A gene is considered as the reference method for determining resistance to methicillin. The mec gene is absent from susceptible strains and present in all resistant strains [9]. The structural component of the mec gene, mec A, encodes the penicillin-binding protein 2a (PBP2a) that establishes resistance to methicillin and other semisynthetic penicillinase-resistant beta-lactams.

Out of the 80 CA-MRSA cases detected phenotypically by cefoxitin disc diffusion,mec A was detected in all the isolates confirming MRSA genotypically. Similar findings were reported by Moussa et al. [13]. where 100% MRSA were mec A positive. However Asghar et al. [3] reported slightly lesser percentage 87.7% mec A gene detection in MRSA strains.

Table 4: Detection of Luk-PV and mec A gene in MRSA isolates by multiplex PCR (n=80).

Multiplex PCR Assay used for detection of Staphylococcal virulence marker Luk-PV genes is the new upcoming method for the detection of both mec A and Luk-PV gene and Mclure et al. [12] first developed this new multiplex PCR assay. This assay is simple, rapid and accurate and offers the potential for prompt detection of newly emerging CA-MRSA. Luk PV gene is often associated with skin and soft tissue infection due to the pore forming heptamer on PMN membranes leading to PMN lysis. 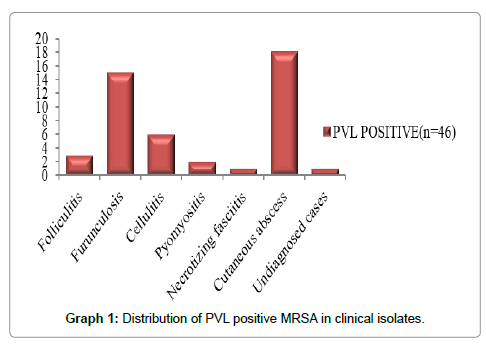 The determination of antimicrobial susceptibility of a clinical isolate is often crucial for optimal antimicrobial therapy of infected patients. This is particularly important considering the increase of resistance and the emergence of multidrug resistant organisms.

Out of 80 CA-MRSA patients, maximum pyoderma cases were concentrated at lower limb 49(61.25%) followed by upper limb 23(28.75%). In 11(13.75%) patientslesions were seen at neck and shoulders and in 6(7.50%) cases abscesses were found on trunk. Only 2(2.50%) lesions were on groin and 1(1.25%) on axilla.11 patients had lesions on more than 1 site,involving combinations of upper limbs and lower limbs.2(2.50%) patients having cellulitis on groin extending to the thighs involving lower limbs,4 patients had furunculosis on both back and shoulders (Graph 2). Similar observations were made by Singh et al. [14] where lowerextremeties were more affected, followed by upper extremeties, then trunk and face. Similarly by ki et al. [15] reported that lower extremities were mostly affected. 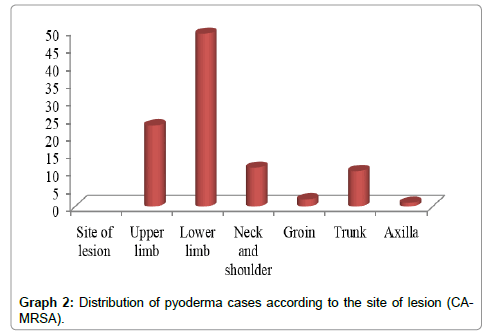 Graph 2: Distribution of pyoderma cases according to the site of lesion (CAMRSA).

Copyright: © 2018 Hashmi A, et al. This is an open-access article distributed under the terms of the Creative Commons Attribution License, which permits unrestricted use, distribution, and reproduction in any medium, provided the original author and source are credited.