Copyright: © 2015 Sharma MC. This is an open-access article distributed under the terms of the Creative Commons Attribution License, which permits unrestricted use, distribution and reproduction in any medium, provided the original author and source are credited.

We perform the two-dimensional (2D) QSAR studies of a series of substituted 2-phenyl-benzimidazole analogues to elucidate the structural properties required inhibitors of IgE response. The 2D-QSAR studies were performed using three statistical methods: the multiple linear regressions, giving square of correlation coefficient r2=0.8386, cross validated squared correlation coefficient q2=0.7218 and predictable ability pred_r2=0.7525; Multiple linear regression (MLR). The results show that the proposed 2D-QSAR models are valid and that they can be applied to predict the activities of substituted 2-phenyl-benzimidazole inhibitors of IgE response.

Asthma is a chronic respiratory disease that affects 300 million adults and children worldwide, including 15.7 million adults and 6.5 million children in the United States [1]. The prevalence has increased by 50% in the past few decades, particularly in Westernized countries. Although corticosteroids and β2-agonists are effective in managing asthma symptoms, there is no curative therapy. There are also concerns regarding the side effects from chronic use of current drugs, particularly by children. The chronic nature of asthma and the lack of preventive and curative therapy are leading patients with asthma in Western societies to seek complementary and alternative medicine (CAM) treatment [2,3]. Human allergic disorders (type I hypersensitivity responses) ranging from hay fever, excema, and food allergies to potentially life threatening asthma and anaphylactic shock are increasing worldwide [4]. Central to the cascade of events that lead to these clinical allergic manifestations are protein-protein binding events between human immunoglobulin E (hIgE) and its class specific Fc receptors on effector cells [5-7]. Allergic asthma is a multifactorial disease, influenced by genetic and environmental factors, and is characterized by bronchial hyperresponsiveness, the presence of IgE antibodies to inhalant allergens and often also by enhanced total serum IgE levels. A switch recombination of antibodies to IgE requires two signals from activated T cells: the expression of the ligand for CD40 and the secretion of IL-4 or IL-13. Both IL-4 and IL-13, independently of each other, are able to induce IgE antibody [8-10]. The allergen-IgE interactions on the mast cell surface initiate a complex series of downstream signaling cascades, including phosphorylation of the immunoreceptor tyrosine-based activation motifs (ITAMs) in the β- and γ-chains of FcεRI, resulting in mast cell degranulation [11,12]. While there are a number of pharmacological agents available for the treatment of asthma and allergic rhinitis, a major shortcoming of many of these therapeutic alternatives is that they impact the disease state by targeting a single mediator that modifies a response at the target organ. By acting on effecter molecules, these drugs provide some symptomatic relief but do not modulate the course of the disease. Anti-histamines, for example, continue to be the drugs of choice for allergic rhinitis because they are somewhat effective and are linked to few side effects [13].

QSAR refers to a discipline in computational chemistry that addresses the modeling of biological activities or chemical reactivity based on the quantitative description for the chemical structure of molecules. QSAR relies on the basic assumption that molecules with similar physicochemical properties or structures will have similar activities [14].

Quantitative structure activity relationship (QSAR) is one of the most important areas in chemometrics, and is a valuable tool that is used extensively in drug design and medicinal chemistry. Once a reliable QSAR model is established, we can predict the activities of molecules, and know which structural features play an important role in biological processes [15]. Since the QSAR model and properties of molecules can be obtained based on descriptors, choosing the most relevant descriptors is necessary. Therefore, using a technique as variable selection for extent number of descriptors is the most essential step in QSAR study [16]. The present paper deals with the novel development of drugs for the category, substituted 2-phenyl-benzimidazole derivatives inhibitors of IgE response.

The main purpose of quantitative structure–activity relationship (QSAR) analyses is to make activity predictions for unknown compounds to guide the structure-based design of new analogues. Multiple linear regression (MLR) models have been developed as a mathematical equation which can relate chemical structure to the activity. The results obtained will be helpful to pharmacologists, chemists and medicinal chemists to come up with improved IgE responses drugs.

Table 1: Structures and activities of benzimidazole derivatives as inhibitors of IgE response.

In logIC50 values were converted to -logIC50 in order to bring out better linear correlations and reduce clustering of compounds while generating QSAR regression lines. The experimental information associated with biological activity, which is used as dependent variables in building a QSAR model. In this study, computational work (2D-QSAR) was performed using Vlife MDS QSAR plus software [18] on a HP computer with Core2 Duo processor and a window XP operating system.

MLR is a method used for modeling linear relationship between a dependent variable Y (pIC50) and independent variable X (2D descriptors). MLR is based on least squares: the model is fit such that sum-of-squares of differences of observed and a predicted value is minimized. MLR estimates values of regression coefficients (r2) by applying least squares curve fitting method. The model creates a relationship in the form of a straight line (linear) that best approximates all the individual data points. In regression analysis, conditional mean of dependant variable (pEC50) Y depends on (descriptors) X. MLR analysis extends this idea to include more than one independent variable. Regression equation takes the form

For QSAR analysis regression was performed using pIC50 values as dependent variables and calculated parameters as independent variables. In any thorough investigation of the effects of molecular properties, it is essential to prove that the results are both statistically valid. 2D-QSAR equations were selected by optimizing the statistical results generated along with variation of the descriptors in this model.

In above QSAR models, r2 is a correlation coefficient that has been multiplied by 100 gives explained variance in biological activity. Predictive ability of generated QSAR models was evaluated by q2 employing LOO method. F value reflects ratio of variance explained by models and variance due to error in regression. High F value indicates that model is statistically significant. Eq. (1) shows 84 % variance in the observed activity values. The low standard error of r2_se=0.1236 demonstrates accuracy of the model.

Cross validated q2 of this model 0.7218, indicates good internal prediction power of the model. Another parameter for predictivity of test set compounds is high pred_r2=0.7525, which shows good external predictive power of the model. The electro-topological parameter SsClcount define the total number of chlorine atoms connected with one single bond. The positive coefficient of the descriptor suggests that IgE responses of Substituted 2-phenyl-benzimidazole may be increased by increasing the number of chlorine atoms present in the nucleus.

The positive coefficient of the molecular connectivity index descriptor in the model suggests that the decrease in branching in the molecule and the presence of heteroatoms increases the IgE responses. An estate contribution electro-topological state descriptor SssCH2E-index, which represents the indices for number of -CH2 group connected with two single bonds, is inversely proportional to the activity. The positive coefficient of T_C_F_2 in the QSAR model reveal that the presence of [fluoro-phenyl at the end terminal of benzimidazole increases activity. The contribution charts of selected descriptors are represented in Figure 1a. The Observed activity and Predicted activity pIC50 along with residual values are shown in Table 2 and plots of observed vs. predicted values of pIC50 are shown in Figure 1b. Figure 1a: Plot of contribution chart of 2D QSAR Model. 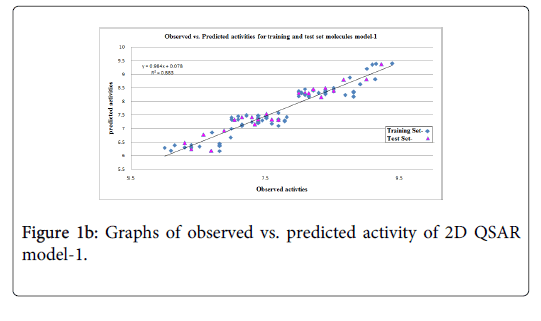 Figure 1b: Graphs of observed vs. predicted activity of 2D QSAR model-1.

A multiple linear regression (MLR) procedure was used to model the relationships between molecular descriptors and the inhibitors of IgE response of the benzimidazole derivatives. The quantitative structure-activity relationship (QSAR) analysis of some synthesized substituted 2-phenyl-benzimidazole derivatives inhibitors of IgE response were performed to find out the structural requirements of their IgE responses activities. Various 2D descriptors were calculated and used in the present analysis. The knowledge of Structure-Activity Relationship (SAR), together with the generation of QSAR, constitutes a large body of evidence that may assist in the development of new molecules with excellent biological activity and low toxicity. The results obtained from present investigation of IgE responses studies indicate that the presence of a chloropheny, fluoro-phenyl substituent leads to increase in the activity in comparison to the presence of a methyl group. QSAR analysis has been used to study the quantitative effects of the molecular structure of the benzimidazoles on their inhibitory activity. In this model special emphasis was given to the contribution of electrotopological in predicting biological activity of 2-phenyl-benzimidazole derivatives and they were found to improve the QSAR model and make it more precisely predictive.

The author wishes to express gratitude to V-life Science Technologies Pvt. Ltd for providing the trail version software for the study. Authors are thankful to the University Grants Commission (UGC), New Delhi for awarding a Research Award No. F. 30-1/2013(SA-II)/RA-2012-14-NEW-GE-MAD-4200.