Copyright: © 2014 Aziz MA, et al. This is an open-access article distributed under the terms of the Creative Commons Attribution License, which permits unrestricted use, distribution, and reproduction in any medium, provided the original author and source are credited.

Mucins are very well known to be associated with different types of cancer. Their role in colorectal cancer has been extensively studied without direct correlation with their change in expression levels. In the present study we employed the human exon array from Affymetrix to provide evidence that mucin family genes are downregulated in colorectal cancer tumor samples. We analyzed 92 samples taken from normal and tumor tissues. All mucin family genes except MUCL1 were downregulated with the fold change value ranging from -3.53 to 1.78 as calculated using AltAnalyze software. Maximum drop in RNA transcripts were observed for MUC2 with a fold change of -3.53. Further, we carried out Integromics analysis to analyze mucin genes using hierarchical clustering. MUC1 and MUC4 were found to be potential biomarkers for human colorectal cancer. Top upstream regulators were identified for mucin genes. Network analyses were carried out to further our understanding about potential mechanisms by which mucins can be involved in causing colorectal cancer.

The differential expression of mucins has been related to altered risk of metastasis and death. Recently, mucins have been used as targets for molecular therapy and as a source of immune therapy [1]. The mucin family includes proteins that contain tandem repeat structures with a high proportion of prolines, threonines and serines. The human mucin (MUC) family consists of members-designated MUC1 to MUC21-that have been sub-classified into secreted and transmembrane forms. The secreted mucins (for example, MUC2, MUC5AC, MUC5B and MUC6) form a physical barrier, which as a mucous gel provides protection for epithelial cells that line the respiratory and gastrointestinal tracts and form the ductal surfaces of organs such as the liver, breast, pancreas and kidney. The transmembrane mucins (for example, MUC1, MUC4, MUC13 and MUC16) have a single membrane-spanning region and contribute to the protective mucous gel through their ectodomains of O-glycosylated tandem repeats that form rod-like structures [2]. Mucins would play a crucial role in forming the defense structure of the gut and could thus be well associated with its diseases. Inflammatory bowel disease [3], crohn’s disease [4,5] and colorectal cancer [1,6] are known to have the involvement of mucins via different mechanisms. As much as it is established that mucins play a crucial role in causing colorectal cancer, the mechanism by which they do so is very complex. There are expression level studies that link mucins with colorectal cancer, but there are conflicting reports regarding their differential expression with respect to normal tissue.

There is evidence of upregulation of some mucins in breast, pancreatic and ovarian cancers especially the transmembrane ones. But there are reports about downregulation of mucins in colorectal cancer [7].

The posttranslational modification of mucins through glycosylation could be crucial in determining their role in cancer. Hence, most of the studies were intended to study the functional aspects of mucins and their association with cancer. This has also led to the identification of target mucins for cancer therapy.

We collected 92 matched tumor-normal samples from 48 patients diagnosed with colorectal cancer. Each Hematoxylin and Eosin (H&E) stained case was reviewed by a board-certified pathologist to confirm the specimen histological consistency with colon adenocarcinoma and that normal specimen contained no tumor cells. The sections were required to contain >60% tumor cell nuclei for inclusion in the study. The study was granted the institutional review Board (IRB) approval after due review. The necessary procedural and ethical consent forms were signed by the patients prior to sample collection.

Each specimen weighed between 10-30 mg. The tissue sample was stored in RNA later (Ambion) at 4°C for 24 hrs; followed by freezing and further storage at -20°C. DNA and RNA extraction was carried out from the same sample by NucleoSpin Trio Kit (Macherey-Nagel, Germany). Quality and quantity checks were done using Nanodrop (Thermo Fischer Scientific).

Omics Office for biomarker discovery from TIBCO spotfire was used to carry out statistical analyses. Linear Models for Microarray Analysis (LIMMA) and Hierarchical clustering were carried out using Integromics.

Data from AltAnalyze for expression levels of all mucin family genes was subjected to Ingenuity Pathway Analysis (IPA). Biomarker and Core analyses were carried out with a selection for ‘Human’ and ‘colorectal cancer’.

Analysis of 45,475 probe IDs available on exon array, made possible the composite analysis of mucin genes. 17 mucin genes were found in the database out which 16 were downregulated. Only MUCL1 was upregulated with a fold change value of 1.17 (Table 1).Differential expression heat map analysis shows two distinct groups from the 92 samples studied (Figure 1).

Table 1: All mucins except MUCL1 are downregulated in colorectal cancer patient samples. Figure 1: Clustering based on Relative sample log fold. All 92 samples were subjected to AltAnalyze software to generate this heatmap. The differential expression with a log fold range of -2.4 to 2.4 was used. Green colored area shows downregulated genes whereas Red shows upregulated genes. 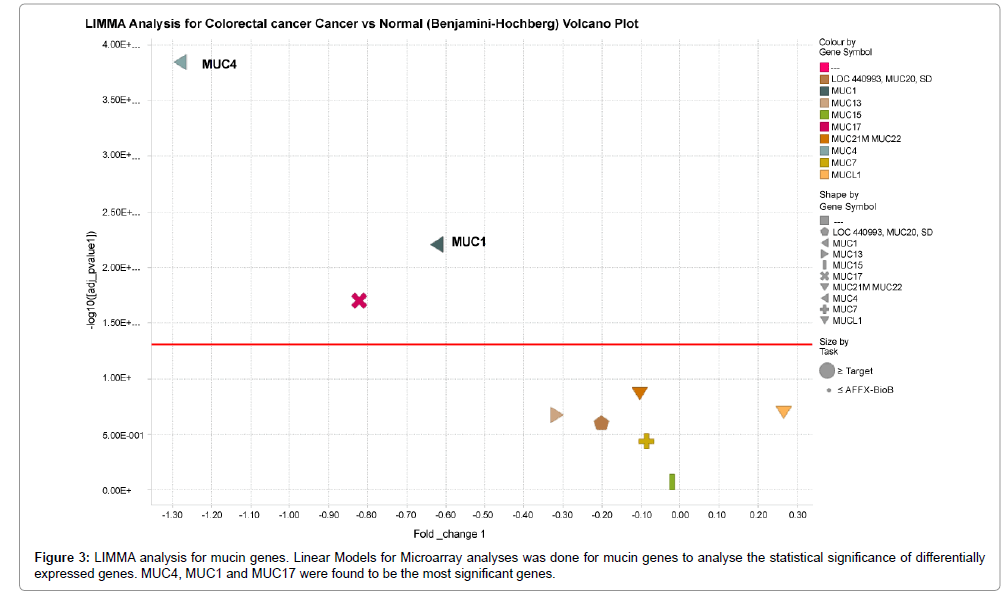 Figure 3: LIMMA analysis for mucin genes. Linear Models for Microarray analyses was done for mucin genes to analyse the statistical significance of differentially expressed genes. MUC4, MUC1 and MUC17 were found to be the most significant genes.

In order to comprehensively analyze the functional significance of the downregulated mucin genes, we carried out ingenuity pathway analysis. Biomarker analysis for colorectal cancer in humans yielded MUC2 and MUC4 to be the putative genes (Table 2). They were found to be biomarkers for diagnosis, disease progression, efficacy and prognosis.

Table 2: Putative biomarker molecules among the family of mucin genes.

An upstream target analysis for mucin genes gave us a list of 35 genes, which could be affecting mucins through different pathways (Table 3). Top upstream regulators were CTCF, IL22, GAB2, IL1B and TSC2 genes.

Seven mucin genes viz., MUC1, MUC2, MUC3A, MUC4, MUC5B, MUC6 and MUC8 were part of a network with a score of 17 (The score is a numerical value used to rank networks according to their degree of relevance to the network eligible molecules, which are mucin genes mentioned above). Genes from this network could be involved in cellular development, cellular growth and proliferation, cell death and survival (Figure 4). Figure 4: Network analysis of mucin genes. Using Ingenuity Pathway analysis all mucin genes were subjected to core analysis. 7/17 genes were included in the network with other molecules. MUC1 has been implicated in colorectal and other cancers mainly by studies involving post transcriptional events. Some studies suggest the gene expression changes of its variants in cancer as well. MUC1 is being found to be an important molecule in the immunobiology of adenocarcinomas [8]. The role of MUC1 in cancer progression is still controversial and somewhat confusing. While Mukherjee and colleagues developed MUC1 specific immune therapy in a CRC model, Lillehoj and co-investigators showed recently that MUC1 inhibits cell proliferation by a β-catenin-dependent mechanism [9]. MUC1 has been suggested as a potential target for developing anticancer agents including vaccines, antibodies and small molecules [10,11]. Several lines of evidence point towards a biological role of MUC1 in colorectal cancer. A positive correlation was described between mucin secretion, proliferation, invasiveness, metastasis and bad prognosis [12-14]. In another report, mucinous CRC is associated with a higher expression of MUC2 and MUC5AC, but a lower expression of MUC1 [1]. Mucin 1 (Muc1) is a tumor-associated glycoprotein and has an important role in cancer progression and metastasis. Recent evidence suggests inhibition of Muc1 could significantly suppress the growth of HCC2998 in nude mice models [15]. Our results show MUC1 to be downregulated in tumor samples, which is consistent with some studies but not all.

MUC12 gene expression was also earlier reported to be downregulated in colorectal cancers and its probable association with metastasis [22]. MUC12 was also found to be an independent marke for prognosis in stage II and III colorectal cancer patients. We also report the downregulation of MUC12 in a significant manner.

The current level of evidence linking mucins to colorectal cancer underlies the importance of studying these molecules in detail. However, the disparity in evidences regarding the expression and post translational modification of these mucins in colorectal cancer may be limiting factor. These disparities could be because of difference in sampling and the method of investigation. This generates a big scope to study these mucins in a composite manner. Our study attempts to address this using a single snapshot taken from tumor and normal samples using exon level microarray. Ingenuity pathway analysis put these mucins in a different perspective with spotlight on MUC1 and MUC4 for their use as biomarkers. There are still some unexplored mucins with highly significant differential expression (e.g. MUC5B) that deserve further studies to prove or rule out their importance in colorectal cancer.

This study was funded by King Abdullah Intl Med Res Ctr through grant#RC10/083 awarded to MAA. We thank Drs. Abdulkarim and Balwi for their help in providing necessary infrastructure. None of the authors have any conflict of interest.